An Open Letter to the Ocean Community on “Our March” 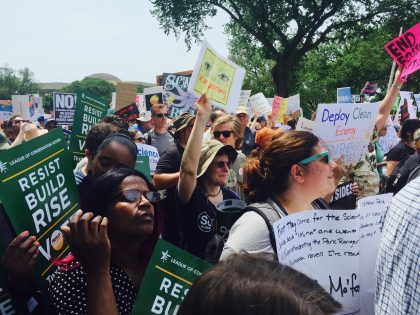 At a resistance gathering, citizens rally and march toward the White House. (Blue Frontier Campaign).

Nine years ago my niece was murdered while working in her college coffee shop by a stalker who was later acquitted by reason of insanity. Even though he was schizophrenic he’d had no problem walking into a gun store in Colorado and legally purchasing the 9-mm pistol with which he’d then driven across the country and shot her to death. Johanna was 21 and planning a career in global women’s health.

As gun violence has continued unabated I, like many reasonable people, believed nothing was going to change. On February 14 seventeen students and staff at Marjory Stoneman Douglas High School were killed by a 19-year-old with a legalized military assault rifle, one of a string of mass shootings in Florida and across the nation. And then things began to change as the several thousand surviving students refused to accept politician’s “thoughts and prayers” and instead demanded action that has led to nationwide student walkouts, demonstrations and lobbying at statehouses and in D.C.

It seems only right that a high school named after an environmental writer and activist who helped save the Everglades “River of Grass” through her individual efforts and grassroots organizing should spawn a generation that will now confront gun violence in the same manner. As she once stated, “Be a nuisance where it counts: Do your part to inform and stimulate the public to join your action…never give up.”

Wearing Blue and Marching for the Ocean in Washington D.C. and from sea to shining sea that day will prove either a colorful gesture – or a turning point in bringing these critical issues into the public sphere where they can be debated and acted upon.

When I was covering a revolution in Central America, the young people risking their live at first talked to us reporters about getting help from the rebels in the hills. But a few weeks later they’d stopped talking about “the rebels” and started talking about “we rebels.” Shortly after that, the dictator and his army were defeated.   When the March for the Ocean becomes Our March for the Ocean, our victory – a healthy ocean and clean water for all – will also become a much realer possibility. 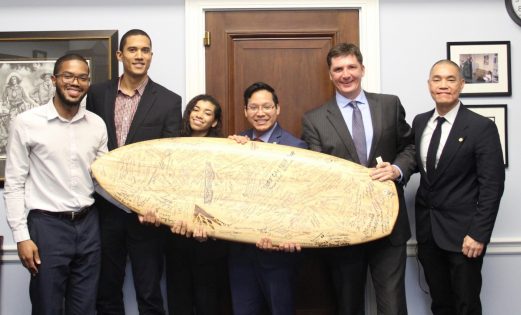 And don’t doubt my historic analogy to a war. The avarice, greed and ignorance that’s impacting our ocean today poses at least the same scale of global threat as Fascism and the nuclear balance of terror held in the last century.   Unfortunately, that threat is now being expanded by an administration and Congress in Washington that views our public seas and connected fresh waters as little more than a gas station or a place to dump mining waste and other garbage.

In defending the salty crucible of life on our planet we are also defending our blue economy and equity as the poor suffer these environmental insults disproportionately be it from dying reefs in the Pacific, eroding native villages in Alaska or extreme storms in Houston, Florida, Puerto Rico and the Virgin Islands.

In defending the salty crucible of life on our planet we are also defending our blue economy and equity as the poor suffer these environmental insults disproportionately be it from dying reefs in the Pacific, eroding native villages in Alaska or extreme storms in Houston, Florida, Puerto Rico and the Virgin Islands.

The question is do we have the power to reverse course? Potentially, yes. Just our 100 March partners to date regularly reach more than 24 million people, or about 11 percent of the U.S. voter population.

Support the March for the Ocean by making a purchase today.

We have a unique opportunity and moment in time to change the national and global tides but not without greater unity of purpose, vision and basic logistics including mobilization (how many busloads of people will you be bringing?) money (we’ve raised less than what’s needed to date), media (who’s spreading the word on M4O?) permits, props, plastic free water sources, signs, banners, and t-shirts. In fact, why don’t you take a break from reading this and buy yourself one right now at: https://www.bonfire.com/marchfortheocean/

It will give you something blue to wear on June 9 plus help pay for the march. 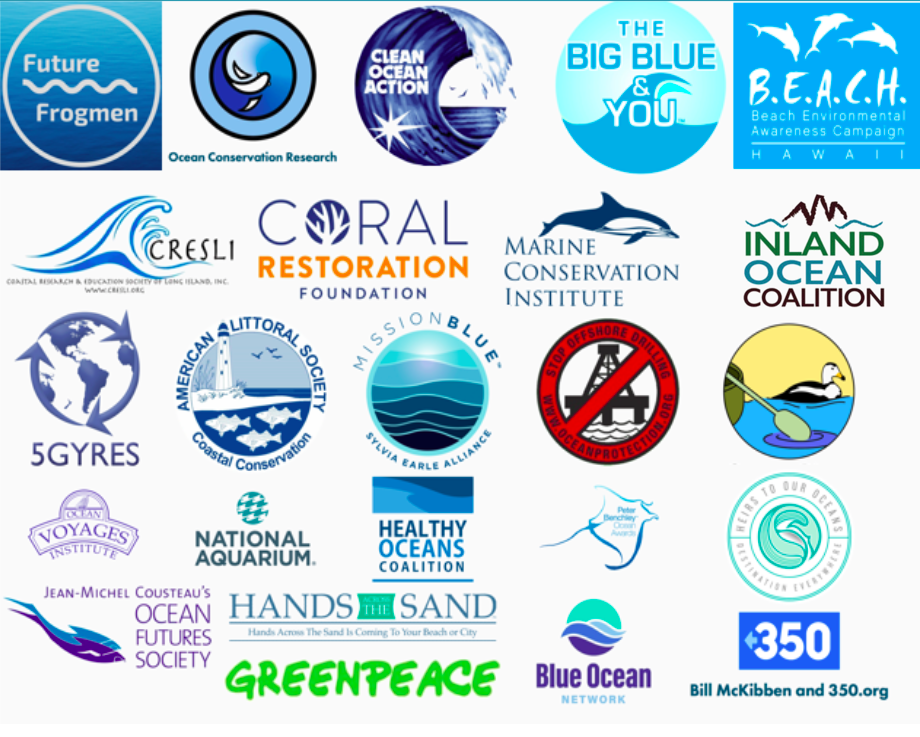 Each of our partners will also directly benefit from becoming March leaders.   If you are “the largest and most influential grassroots environmental group in America,” how could you not also be leading the first large march for the 71 percent of the environment that’s Ocean?

If you are “the world’s largest international ocean conservation organization,” how could you not want to lead the largest march ever held for the ocean – and for issues such as offshore drilling you campaign on?   If you are “protecting the oceans, waves and beaches that give us so much enjoyment” how could you not take pleasure in leading a celebration and defense of those same resources? If you “helped pass our nation’s bedrock environmental laws” you know how the environmental protests of the 1970s made passage of those protections possible and will want to lead the next wave of environmental protest to defend these same bedrock laws – like the Clean Water Act and Marine Mammal Protection Act – now under attack. If you “will never stop fighting for a greener, healthier world for our oceans, forests, food, climate, and democracy” you’ll want to be at the forefront of a massive ocean march and next wave of democratic resistance while also mobilizing the colorful ‘kayaktivists’ who helped defeat plans for offshore drilling in 2015 and will gather again on the Potomac River on June 9 2018. 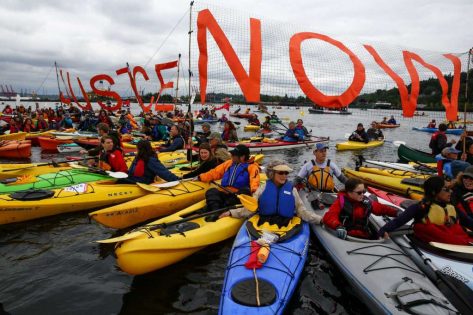 Unity will strengthen all our partner groups as they take greater leadership of our march through organizing committees, regional hubs, phone banks and outreach from social media to handing out fliers at schools, meetings and other rallies. A rising tide lifts all boats as they say, or as we prefer to say, ‘The Ocean is Rising and So Are We.’ 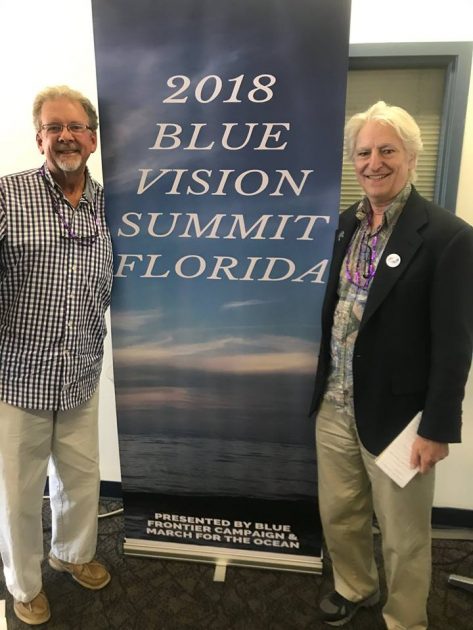 Her Deepness, Dr. Sylvia Earle’s March for the Ocean Video 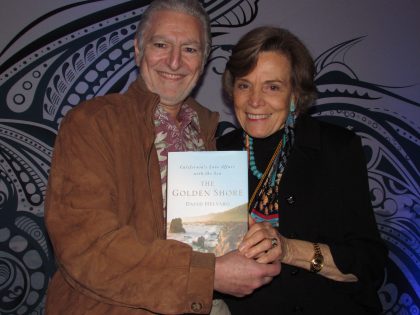 Executive Director David Helvarg meets with Her Deepness, Dr. Sylvia Earle on a discussion about ocean protection. Watch it now.

Or as National Geographic Explorer-in-Residence Dr. Sylvia Earle explains on one the proliferating March for the Ocean videos: “I’ll be marching for the Ocean. You should come too. Why? Well, the fish can’t be there to say what they need to say, the whales can’t be there, the turtles, the ocean, unless it rains – that’s’ the ocean sending us a message – but we need to speak for those who cannot speak for themselves…so be there, come celebrate, come be a voice!

For more on sponsorship, organizing and media efforts or to sign up for our march go to: www.marchfortheocean.org or contact marchforocean@gmail.com

Here are a number of ways to get informed and take action:

Thank You for Your Support!

For more information on March for the Ocean, please email the M4O Steering Committee at marchforocean@gmail.com