In this issue
Is the Political Tide Turning?
It’s Not Just About the Whales
Back to the Oregon Shore
Seaweed Spotlight: Cook Inletkeeper
Last Chance to Name a Hero: Peter Benchley Ocean Awards Is the Political Tide Turning?

We just had an election in which the public seemed to see the need for larger changes in society. And of course changes of any kind tend to come in waves. Along with the emergence of a new demographic profile of the U.S. electorate we saw people in a number of states voting for Gay marriage equality, legalized use of marijuana and in California, a tax increase to help save public education. At the same time Super Storm Sandy’s impact on the shore put climate change front and center on the public policy agenda for any politician willing to take the heat from the fossil fuel industry. Unfortunately, while average people may be open to big changes the two party political system has become far more polarized and incremental than it once was. That’s why the keystone laws that protect America’s ocean like the Clean Water Act, Marine Mammal Protection Act, Coastal Zone Management Act and others are now close to middle age. The Clean Water Act is celebrating its 40th anniversary this year.

The way in which our system has bogged down in a quagmire of waste fraud and unregulated corporate abuse can be hugely frustrating when working for ocean and coastal protection. One example: In 2000, I wrote about EPA efforts to impose Total Maximum Daily Loads (TMDLs) for pollution – nitrogen and sediment from factory farm waste and construction sites – running into the Chesapeake Bay following the failure of a voluntary multi-state effort that has been ongoing since 1983. In 2010 the EPA finalized its plan to put the bay on a “pollution diet,” that’s supposed to clean it up by 2025. This was one of the items the Obama campaign bragged about in its response to our ocean letter to the Presidential Candidates (see Blue Notes #104). However within weeks of the EPA announcing its TMDL plan the American Farm Bureau Federation,  National Association of Home Builders and others filed suit. The lawsuit went to court in October 2012 where the judge told the contending parties, “Don’t expect a decision soon.” This means attempts to clean up the bay are destined to be stalled for at least 40 years (1983-2025), mostly by industrial chicken producers and shore side developers whose paid politicians can then point to this failure as proof that government doesn’t work. By contrast the free market has worked well for algae blooms and bacterial mats but not so much for oysters, striped bass and kids who like to swim without getting sick. For more on the TMDL lawsuit see the November issue of the Chesapeake Bay Journal.

On a more hopeful note ocean friendly policies in coastal states like California, Massachusetts and Rhode Island demonstrate that good governance in places where the public cares deeply for its waters can still make a positive difference.

At the first Blue Vision Summit back in July 2004 there was talk of a BOB, a ‘Big Ocean Bill,’ to codify the recommendations of two major ocean commissions into federal law. But as Congress became ever more polarized and turned even ocean conservation into a partisan issue, blue movement strategy shifted to executive action. This led, thanks to lots of grassroots pressure, to President Obama signing off on a National Ocean Policy (NOP) in the summer of 2010. Today NOP looks good on paper but still needs to be implemented through nine Regional Planning Bodies, to be made up of representatives from federal, state and tribal authorities.

The first 2-day meeting for the first body was held in Portland, Maine, this November. It promises to better coordinate a range of ocean uses across New England while reducing their environmental impacts. The many tribal representatives attending emphasized the need to improve regional water quality. The meeting also attracted lots of public comment and participation from both the Northeast Regional Ocean Council, made up of New England states already involved in efforts to restore their coastal waters and the New England Ocean Action Network, a seaweed coalition of conservationists, fishing groups, the New England Aquarium and others committed to, “Healthy Oceans, Thriving Communities.” It is because of this multi-stakeholder citizen involvement that the first regional body, rather than simply a meeting place for government employees, holds promise to actually improve the health and habitats of the Northeast’s public seas. 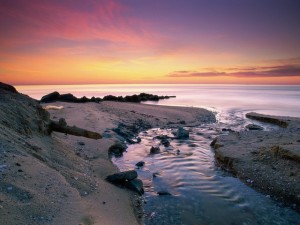 But lack of transparency and clarity in the setting up of the next eight regional bodies, including in the storm battered mid-Atlantic, suggests the NOP will only work if ocean folks from all regions of the nation are at the table and at every public hearing working as advocates and gadflies for the sea.

When hundreds of us march onto Capitol Hill this May 15 as part of the movement’s 4th Blue Vision Summit, we should also be demanding large change from our elected leaders. Along with full funding for marine science, exploration and frontline ocean agencies such as NOAA and the Coast Guard, how about a Healthy Oceans Act at the level of the Clean Air and Clean Water acts of the last century? Why not make, “healthy oceans, thriving communities,” the law of the land and the sea for the 21st Century? That might not seem politically feasible in 2013, but it’s what would be in the public interest.
Top

It’s Not Just About the Whales

Like our friends in the Coast Guard, Blue Frontier Campaign does more with less; Blue Vision Summits, the Peter Benchley Ocean Awards, Blue Notes, the Blue Movement Directory, 50 Ways to Save the Ocean, along with additional books, videos, articles, public speaking and most important, public action.

As we continue our campaign we ask you to consider making an end of year, tax-deductable donation to Blue Frontier Campaign. This will allow us to continue into our second decade inspiring both awe of our blue marble planet and citizen action to protect it. Thank you for your support and best fishes for the holiday sea sun.
Top

Back to the Oregon Shore

In February Dr. Jane Lubchenco will be retiring as Administrator of NOAA to return to her marine research and to her family in Oregon. During her sometimes controversial tenure she helped restore NOAA’s focus on a range of ocean issues including overfishing, illegal fishing, marine debris, restoring damaged ecosystems including the Gulf of Mexico in the wake of the BP disaster and addressing major new climate-linked challenges like ocean acidification. In 2010 she was awarded the Peter Benchley Ocean Award for her work advancing U.S. National Ocean Policy.
Top

A regular feature of Blue Notes where we shine the light on a group from the Blue Movement Directory in order to create a more self-aware and collaborative movement. This month we feature Cook Inletkeeper

Formed in 1994, with Sedna the Inuit goddess of the sea as its logo, the Cook Inletkeeper works to protect the 220 miles of Alaska’s Cook Inlet that separates the Kenai Peninsula south of Anchorage from the mainland. Over half the state’s population of 723,000 live within its watershed that’s the size of Virginia.

Despite a spectacular marine setting the Cook Inletkeeper, a member of the Waterkeeper Alliance, grew out of a settlement by three oil companies operating in the area that were facing huge fines over 4,200 Clean Water Act violations. Since its founding the group’s hallmark accomplishments have included working with tribes to get the EPA to study oil pollutants effects on Native people’s subsistence foods (salmon, moose, etc.), carrying out an oil pipeline study that led to new rules that have reduced leaks and spills 90 percent, protecting beluga whale habitat from offshore oil leases, gaining new protections for Kenai salmon rivers, fighting a major proposed strip mine for coal and launching the state’s first clean harbors certification program.

“Climate change is the biggest issue for Alaska’s oceans and our people – and yet there’s an oil boom going on here,” Inletkeeper Bob Shavelson points out. “The state has created massive incentives for oil and gas development with complete disregard for climate issues of course. There are two jack-up rigs doing exploratory drilling in the inlet right now, the first time in 20 years. There’s talk of adding a 16th production platform (to the 15 pumping oil in the Inlet),” he tells me. Shavelson patrols the area on a 25-foot rigid hull inflatable Zodiac when the ice isn’t too thick, or catches rides with local fishermen in the winter if something’s amiss. In the fall he likes to surf in a thick neoprene wetsuit. 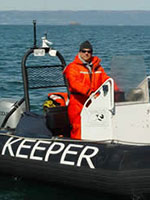 Along with offshore oilrigs there’s a massive onshore production facility on the inlet that dump over 2 billion gallons of oily waste into local waters every year, a practice not allowed elsewhere. In 2009 the Redoubt Volcano erupted sending torrents of ash, ice and rubble downslope on either side of a major Chevron oil tank storage farm built at its base. Big oil tankers also transit the turbulent ice-chocked waters of the Inlet without the tugboat escorts that are required in Alaska’s Prince William Sound where the Exxon Valdez spill took place in 1989. “As a regulatory backwater, Alaska just doesn’t take a precautionary approach,” Bob explains. “What we want to do is to keep oil, gas and coal in the ground. Some of our most important work now (carried out by a staff of nine and 1,200 Inletkeeper members and volunteers) is monitoring the effects of climate change on salmon streams,” he explains. “We got the governor to make a promise not to trade one resource for another so one of our big fights is the Chuitna coal mine that would (strip)mine completely through a salmon stream.”

While admitting Alaska is, “a resource colony with 90 percent of state revenue coming from oil and gas,” Bob remains hopeful in his 17th year as Cook Inletkeeper. “Mine is a wonderful job and opportunity in a beautiful place to try and make a difference. I grew up on the Jersey shore and saw the impacts of ocean dumping and think Alaska can have more sensible development.”

As part of that vision he points to the area’s active volcanoes, huge tidal shifts (26 feet between high and low tide the day we spoke), abundant winds and solar summers as having the potential to make Alaska truly self-reliant as a renewable energy frontier.
Top

Nominations for the 6th annual Peter Benchley Ocean Awards close at the end of this month.

Consider who you think should join the 32 past winners and heroes who represent the best in solution-oriented ocean protection across a range of endeavors. And we hope to see you May 15 in Washington, D.C., for the awards.
Top