A tale of two Presidents

On July 19, President Obama, leader of what is still arguably the most powerful nation on our blue planet, signed an executive order establishing a U.S. ocean policy to protect our seas.  But a few

weeks earlier, he passed up an opportunity to transform both our economy and our seas.  This was during his White House speech on the Gulf Oil Spill when—unlike JFK pledging we would be on the moon by 1970—he failed to set any dates or deadlines for cutting our dependence on fossil-fuels, say even a modest 20 percent by 2020.  His failure to use this crisis to push for climate legislation or talk about an environmentally responsible ocean policy is in marked contrast with another president I recently got to interview.

President Anote Tong of the Pacific island nation of Kiribati (capitol Tarawa, population just over 100,000) has established one of the largest marine wilderness parks—and UN World Heritage Site—in his nation’s Phoenix Islands.  He did this two years ago despite the fact that sea-level rise driven by climate change threatens to overwhelm his nation by mid-century, likely forcing its population to evacuate its home islands.  “We don’t like the word refugee,” he told me, “but we must prepare for relocation with dignity.” 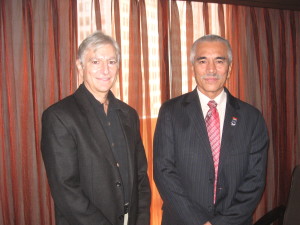 He believes that Kiribati’s gift to the world (a marine park the size of California) needs to be reciprocated.  In November he will be holding a meeting in Tarawa for the major CO2 polluter nations of the developed world to meet with the first victim states of the greenhouse century including his own, the Marshall Islands and the Maldives.

With increasing saltwater incursions becoming a daily problem I ask him what are the future rights of submerged nations?

“These are new emerging questions,” he responds.  “What legally happens to our nation?  Can we maintain our rights to our EEZ (Exclusive Economic Zone)? Our World Heritage Site?”

“Can you envision your people being relocated intact, the whole population staying together in another place?” I ask.

“That’s hard to envision,” he admits.

(For the full interview with President Tong, see The Nation.)

For the more than 400 of us who participated in the 2009 Blue Vision Summit in Washington, D.C., it was both an inspiration and a practical chance to begin solving the ocean crisis early in the new administration (see the summit video narrated by Sylvia Earle and directed by David McGuire).

While it helped lead an Executive Order establishing a first national ocean policy, we’ve also seen an oily catastrophe in the Gulf and continued decline in our public seas and waterways.

This is why we need a new Blue Vision Summit to address the Gulf, promote ocean policy in action and in the water, and deal with climate impacts on our blue world.  The next summit and Blue Frontier/Peter Benchley Ocean Awards are set for May 21-23, 2011 in Washington, D.C. so be sure to SAVE THE DATES!  Summit planning meets are set for November 10 at the Carnegie Institution in Washington, D.C. and November 17 at the California Academy of Sciences in San Francisco.  For information on how to get involved or become a sponsor send a note to info@bluefront.org or call Blue Frontier at 202-387-8030.

Just as President Obama promised his kids a dog after he was elected, Margo and Carl Pellegrino have bought their kids a new dog (from the pound as promised) following Margo’s successful Seattle to San Diego paddle in her outrigger canoe as a Blue Frontier project.  She and her months-long land escort June Bernard made an appearance at the recent Ocean Champions reception in Washington, D.C. along with Seaweed Rebel and ocean rower Roz Savage (a trans-Indian Ocean row is next for this inveterate eco-adventurer) plus nine members of Congress.  Also in attendance were Blue Frontier’s outgoing Associate Director Viviana Jimenez (good luck at Oxford) and incoming AD Mary Kadzielski (congrats on your Masters).

After the summer of oil (See Blue Notes #79), we’re seeing a new wave of ocean reporting in the media.  Along with Mother Jones cover story, “The BP Cover-UP” by Julia Whitty, and National Geographic’s cover story on the spill, Nat Geo also put out a special issue on the oceans.  Time magazine profiled “her deepness” Sylvia Earle and Code Blue, her effort to establish marine “hope spots” (wilderness parks like the Phoenix Islands), while I got to profile actor Ted Danson and his marine work with Oceana in Parade magazine.  The Season opener of PBS’s Nature, “Cuba – The Accidental Eden” included a lot of the reef research being done by 1Ocean1Planet’s David Guggenheim and his local colleagues.

Two new ocean books, Four Fish by Paul Greenberg and The Wave by Susan Casey are getting extraordinarily good coverage while my Saved by the Sea got a nice write up from the Society of Environmental Journalists.  Carl Safina has a new book coming out, The View from Lazy Point, and a second on the BP spill, one of almost a dozen spill books slated for release including In Deep Water by NRDC that’s the first out the wellhead.  Nancy Knowlton of Smithsonian has a lovely picture and story book Citizens of the Sea out with National Geographic (talk about a couple of big fish), while Hawaiian photographer Wayne Levin’s new photobook Akule is available at a discount (and a donation) to Blue Frontier supporters. Click here for more information.

Of course not all the blue coverage is ocean friendly or particularly thoughtful.  At a time when coral reef ecosystems are collapsing worldwide Newsweek ran a story saying SeaWeb‘s “Too Precious To Wear” campaign to end the trade in live coral jewelry was hurting the red coral artisans of a “postcard-perfect fishing village” in Italy.  I expect the Japanese edition of Newsweek will soon argue that limiting commercial whaling has hurting the scrimshaw artisans of the “postcard-perfect fishing village” of Nantucket who no longer get to carve up whale teeth.

And while it is not clear what position its characters take on either whaling or their state’s recent ban on shark fin sales (Mahalo nui loa all you activists who made it happen), it’s still pretty cool to see the newest version of Hawaii Five-O airing on CBS.

Son of a Bleach 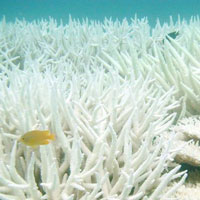 Speaking of coral this year’s extreme heat has triggered the worst mass bleaching of tropical coral reefs since the global bleaching events of 1997-98, the hottest year in history.  That year saw 16 percent of shallow-water reefs die.  This year’s bleaching across the Pacific is now being followed by mass bleaching/die offs in the Caribbean.

I wrote a chapter on the earlier bleaching for the book Feeling the Heat, traveling from Florida to Fiji to Australia and feeling like a tourist of the apocalypse.  While there’s been some recovery from those bleaching events we now have the added problem of ocean acidification that will make it harder for recovering corals—and all shell forming critters—to get calcium carbonate out of the seawater surrounding them.  That’s what allows them to build their protective outer coats.

Still, as Sylvia Earle told Time’s reporter Bryan Walsh, healthy protected habitats are more able to resist these kind of environmental insults, so we need to protect what we can as soon as we can.  I don’t like the term Triage, but let’s hope we can save what’s left with dignity. 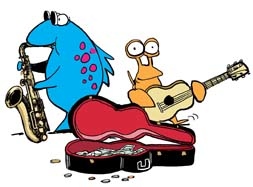 And a few clams

Blue Frontier, like the Coast Guard, does a lot with a little.  Any contribution you can make to help us promote unity among all ocean interests in order to build a social movement for our seas and enact solutions that can make a difference in the water is appreciated.  Just go to www.bluefront.org and hit Donate or send a donation to Blue Frontier Campaign, P.O. Box 19367, Washington, D.C. 20036.