State of the Ocean, Hope, Videos and More!

In this Issue
Dead Seas?
Can we have our Ocean Policy Yet?
Shark and Awe
Port Martyrs Remembered
Standing up for Good Causes
See What you Did!
Lighter side of the Apocalypse
Last Requests

concluded that our seas “are at high risk for entering a phase of extinction of marine species unprecedented in human history.” This ecosystem collapse is linked to human activities including industrial overfishing and fossil fuel fired climate change. It’s all part of the 6th great extinction in planetary history (that is the subject of The Cove director Louie Psihoyos’s next documentary). The last mass extinction was caused by a meteor.

I have to admit it’s depressing that the best available science keeps projecting the worst imaginable scenarios. More frustrating is that we know what the solutions are but haven’t mobilized the political will to enact them. Still, if we don’t try, we lose. That’s why so many groups are hard at work to see a new U.S. ocean policy based on ecosystem protection brought into being. It is moving forward but at a (pre-climate change) glacial pace. Top

Given the crisis in our seas it would be nice to see some bold steps taken to begin managing our public seas through an ecosystem-based approach. “If not now, when?” asked Admiral Thad Allen (USCG Ret.) at Blue Vision Summit 3 this May. Instead of high-profile action, the President’s National Ocean Council held a dozen Listening Sessions around the country in June from D.C. to Hawaii to review 9 draft Strategic Action Plans, some of whose implementations have been rolled back from 2015 to 2020.

Blue Frontier Campaign worked with other groups including Sierra Club, Conservation Council of Hawaii, Surfrider Foundation, People for Puget Sound, Conservation Law Foundation, Littoral Society, and Our Ocean Coalition to organize public turn out for these Listening Sessions. Hundreds of people turned out to the Listening Sessions just as they did in 2009 to ask the Ocean Policy Taskforce for a unified policy which President Obama signed as an executive order in July 2010. The National Ocean Policy looks promising on paper but we have yet to see it being used as a management tool in the water.

The great majority of testimony was positive with broad representation from different marine stakeholders, not just conservationists. Pride in local collaborative efforts to protect and restore health in the ocean and Great Lakes was also a major theme put forward by people involved with the Mid-Atlantic Regional Council on the Ocean, Northeast Regional Ocean Council, West Coast Governors Agreement, Great Lakes Initiative and others.

Those who spoke out at the meetings included Governor Abercrombie of Hawaii, California Secretary for Natural Resources John Laird and Congress members Pallone of New Jersey, Schrader of Oregon and Dicks of Washington.

One consistent theme was people saying they didn’t want plans to create more plans; they wanted to see government action in the near term to improve ocean health. California officials strongly recommended some short-term pilot projects be initiated in cooperation with local efforts already underway.

Unfortunately when I attended the San Francisco meeting with upwards of 200 other folks I heard a top NOAA official say that after they review our input and write up their final strategic plans early in 2012 they will…hold another round of listening sessions. Well, listen to this: We demand some bipartisan agreement to stop timing our ocean policies to election cycles and respond to the dire crisis at hand (see above)! Top

We could certainly learn from the Bahamas. It has joined Honduras, the Maldives and Palau in banning shark fishing in their 243,000 square miles of territorial waters. Creation of this shark sanctuary is a big boost for conservation and a victory for the Bahamas National Trust that also helped save the West Indian 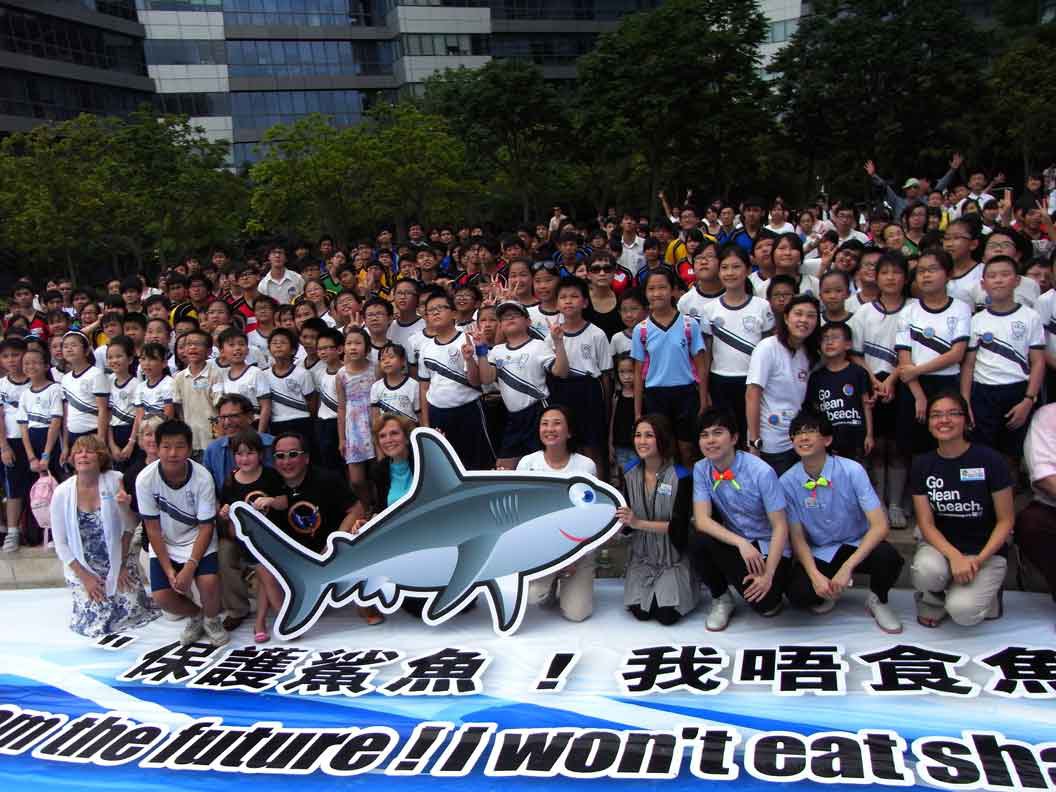 Flamingo from extinction. The ban came in response to a company’s announcement last year that it planned to open up a fishery for sharks and ship their fins to Hong Kong, the shark fin consumption capitol of the world. Taking the message of shark conservation to the belly of the beast, so to speak, Sylvia Earle, photographer David Doubilet and others joined 1000 Hong Kong kids this month at Cyberport HK 9 as they took an “I am the future, I won’t eat shark fins” pledge! Also, while 7 foot 6 inch Yao Ming may be retiring from the NBA, the hugely popular Chinese basketball star will continue to speak out against the consumption of Shark Fin soup, the standard fare at any business luncheon or dinner in Hong Kong. Ming first spoke out in 2006. Up to 72 million sharks a year are killed, mostly for their fins used in this tasteless (until seasoned) cartilage swill that is a status symbol for China’s wealthy would be Mandarins. It’s worth noting the original Mandarins considered sea otter robes the height of fashion. Pass the Panda burgers please.

What the Bahamas and the young people of Hong Kong are doing represents hope that the deadliest predator in the sea can be saved from its own wrongheaded insistence on eating shark, bluefin tuna, napoleon wrasse, sea turtle and other endangered critters, some of whom were already old when we mammals were the coming thing. Top

On July 5, I represented Blue Frontier Campaign at the 77th commemorative ‘Bloody Thursday’ picnic at the International Longshore and Warehouse Union (ILWU) Local 10 union hall near Fisherman’s Wharf. It marked the 1934 SF waterfront strike and street battle that saw two workers killed but also led to a Bay Area general strike that helped win dockworkers and merchant sailors their rights to decent pay and working conditions. In April, Local 10 shut down the port of Oakland for 24 hours in solidarity with public workers in Wisconsin whose collective bargaining rights are under attack. The ILWU has also been a strong supporter of community and port efforts to reduce air and water pollution on the nation’s docks. In supporting the ILWU and other maritime workers and businesses, BFC recognizes that sustainable working waterfronts are vital to our vision of a healthy ocean and the communities that depend on it. Top

Standing up for Good Causes

On July 12-13, BFC’s Ocean Explorer Margo Pellegrino, who paddled an outrigger from Seattle to San Diego last summer, attempted a stand-up paddle the 127-mile length of New Jersey from Cape May to Sandy Hook. But rip currents and dangerous seas forced her to cancel short of her destination even after a second day’s good efforts. She was going to extremes (again) as a fundraiser for the Children’s Hospital of Philadelphia that helped treat her friends’ young son for cancer (now in remission) and the Emerald Coast (NJ) chapter of Surfrider Foundation. Great effort, Margo! It’s your commitment – and causes – that count!

See What you Did!

National Ocean Policy and Ocean Recreation were only two of dozens of issues addressed by leading ocean experts at Blue Vision Summit 3 this May. We now have 21 hours of video from the panels and workshops online for your viewing and reposting. (You can browse by day on the BVS3 website or go straight to the BVS3 playlist.) We also have notes from the sessions and photos! Check them out if you missed BVS3 or the sessions you wanted to attend but couldn’t. Top

Lighter side of the Apocalypse

A new study based on DNA sampling suggests that the lineage of the world’s endangered polar bears dates back to a single female brown bear in Ireland 20 to 50,000 years ago. So why do these scientists care if the bear was married or single? Top

If you or your group has a project that’s helping solve one of the major challenges confronting our ocean or a victory to brag on let us know about it at info@bluefront.org. We’re looking for stories we can highlight in future issues of Blue Notes.