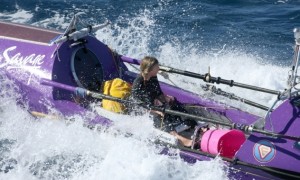 Roz Savage says she’s hanging up her oars after becoming the first woman (and Brit) to row solo across the world’s “Big Three” oceans, the Atlantic, Pacific and Indian, the last two as part of Blue Frontier Campaign’s Ocean Explorers project.

Her five-month crossing from Freemantle, Australia to Mauritius on top of her time crossing the Atlantic and Pacific Oceans earned Roz the record as more time afloat than any other woman rower in history and more distance covered. She was greeted on her October 4th arrival by her mother Rita and dozens of well wishers and members of the press. 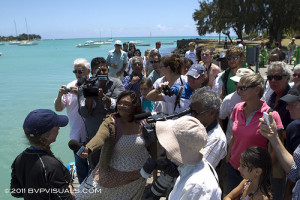 Another British explorer George Mallory when asked why he wanted to climb Mount Everest replied, “Because it’s there.” Roz rowed oceans not because they are there, but to alert the world to the need for each of us to take actions, big and small, to better our blue planet, our ocean, our climate. As she often says, “[I]f you take a lot of tiny actions and you string them all together, you really can achieve almost anything.”

Roz’s future plans?  Her 23-foot rowboat after spending about a year and a half out of the last three at sea is in a lot worse shape than Roz but is looking for a home at a museum or similar appropriate venue. [Please contact us if you can help find Sedna Solo a home.] Roz herself has two books and a film planned, and possibly a foundation “for the next generation of change makers.” Also, we suspect, lots of time set aside for interacting with her fellow humans.
Top

The House Holds a Hearing

On the other side of the world, Tuesday, October 4 marked a less propitious moment for our

seas. House Natural Resources Committee Chair Doc Hastings (R – WA) held a hearing on the president’s National Ocean Policy (see Blue Notes #89), which he calls an “irrational ocean-zoning plan.” Five of seven witnesses were invited by the majority and reflected Representative Hasting’s views, including a spokesperson for the National Ocean Policy Coalition, a front group for the oil and gas industry. The oil and gas industry was also the major campaign contributor to Hastings’ 2010 re-election campaign. As author Upton Sinclair once wrote, “It’s difficult to get a man to understand something if his salary depends on his not understanding it.”

For more on the hearings, check out the blog written by Mike Dunmyer of Ocean Champions.
Top

The Aquarium of the Bay at Pier 39 in San Francisco hosted a retirement celebration for my friend Peter Douglas and about 400 of his closest admirers on September 30. Peter is the creator and long-time Executive Director of the California Coastal Commission. He conceived the need for a state agency to provide public access to the shore and limit unwise coastal development along the 1,100 miles of California’s 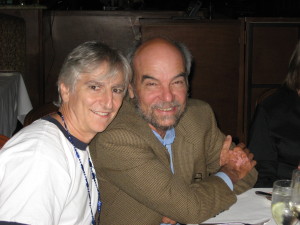 coast at a time when massive developments, freeways and nuclear plants were being planned up and down the coast. But as a result of a 1972 voter initiative he authored and the 1976 Coastal Act he wrote, the World Bank recently rated California’s coastal protection the best in the world.  Peter arrived at the celebration in a wheelchair, battling cancer with a lot more grace than which he battled big developers and crooked politicians over the years.

A proclamation was read that had been passed that day by the State legislature comparing Peter’s accomplishments to those of John Muir, Rachel Carson and Ansel Adams. When the Commission’s new Executive Director promised to carry on his conservation legacy, Peter gave him a friendly warning, “Don’t screw it up.”

Fifty commission staff then came to the front of the room with a few guitars, put on bolo ties, one of Peter’s sartorial signatures, and led the crowd in an adaptation of a Woody Guthrie classic: “This Sand is Your Sand.”
Top

The first time I met Dr. Frances Gulland she was in a rain slicker doing a necropsy (animal autopsy) on an

800-pound sea lion and managed to find a small rifle slug that NOAA enforcement agents later used in the successful prosecution of the Monterey fishermen who’d shot it.

I recently visited the vivacious British-American veterinarian and newest member of the U.S. Marine Mammal Commission at her office at the Marine Mammal Center in Marin County, California. The Center, located on a bluff overlooking the Pacific is the largest ocean animal hospital in the world and Frances has been its chief vet for 17 years. There were 30 patients in its large fenced pens and pools the day I visited, harbor seals, sea lions and a dolphin. Most will recover and be returned to the wild. 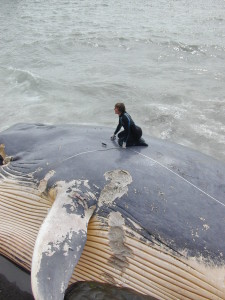 Frances was born in England but raised in Italy. She used to love going to the beach “and like many girls, I wanted to be a vet.” She went to vet school at Cambridge and later worked at the London Zoo before getting her PhD studying the relationship of parasites and wildlife. She carried out field work on feral sheep on St. Kilda Island off Scotland, Lemurs in Madagascar, wild dogs on the Pampas of Latin America and lots of animals on the Serengeti in Africa, before taking a one-year fellowship at the Center in 1994. “What kept me here is how everyone is caring about the animals and brings them in when they find them sick or in trouble and also there was the funding to work in contamination [to study the impact of pollutants on marine mammals]. Plus there are intelligent people interested in linking up science with policy. So you can go out and check out a dead whale and cut it up to see if it’s been killed by a ship strike and then report to people who will actually make the rules on shipping.”

“There’s nothing in vet training to prepare you for marine mammals,” she adds. “In vet school you learn about organs and tissues but you soon realize how important feed and the environment and social structure is to the health of these animals. It’s always challenging .”

To volunteer at the Marine Mammal Center and maybe get a chance to meet or work with Dr. Gulland, visit their website.
Top

Seaweed Spotlight: North Carolina Coastal Federation
A new regular feature of Blue Notes where we shine the light on a group from the Blue Movement Directory in order to create a more self-aware and collaborative movement.

With more than 320 miles of ocean beaches and 4,200 miles of shoreline around the state’s sounds,

rivers and creeks, the North Carolina Coastal Federation – with a staff of 20 and over 25 years experience works to help North Carolinians “take an active role in the stewardship of North Carolina’s coastal water quality and natural resources”

Todd Miller is the Executive Director and founder. Among current projects he’s particularly excited about are 42,000 acres of wetlands they’re now helping restore in the northeastern part of the state around Pamlico Sound. “It’s mostly farm land and wildlife and hunting preserves surrounded by wildlife refuges,” he says. They’re working with local farmers and landowners from the drainage association to add the area to the 5,000 acres of wetlands they’ve already restored.

Perhaps their most popular program is their oyster reef restoration efforts that got a big boost in 2009-2010. With federal jobs/stimulus funding they established 50 acres of new reef in Pamlico Sound in nine months using 150,000 tons of limestone for substrata and provided 150 people with jobs. The oyster reef will increase coastal protection and water quality, assuring future jobs and a better quality of life along the shore.

They also work with local government and businesses on low-impact development along the coast and adaptation for sea level rise and currently are fighting a major cement plant complex proposed on the Cape Fear River. The Federation is a founding member of Restore America’s Estuaries, an alliance of 11 organizations and an example of how by schooling together seaweed groups can increase their strength and influence. Not surprisingly the Federation’s headquarters is located in Ocean, North Carolina.
Top

In California Governor Jerry Brown signed the shark fin ban into law on October 9 (see Blue Notes #91), the same week the Republic of the Marshall Islands established the world’s largest shark sanctuary. The parliament in Majuro unanimously passed a law ending all commercial fishing for sharks in their 768,547-square-mile Exclusive Economic Zone, joining Palau, Honduras and a handful of other nations in protecting one of the ocean’s top predators other than us. If you’re interested in seeing the United States join the list of nations protecting sharks, check out this White House petition banning the sale and possession of shark fins.
Top

Do you know an ocean hero?

Be they a scientist, explorer, policy-maker, media person, young person, or other?  Don’t forget to nominate a candidate for the 2012 Peter Benchley Ocean Awards. Closing date for nominations is December 31st. For more information, click here or e-mail benchleys@bluefront.org.
Top