Snow-capped mountains, cowboy boots and elk burgers aren’t what you usually associate with ocean events, but for some 350 people who participated in the Colorado Ocean Coalition’s Making Waves symposium in Boulder November 13, Colorado is ocean country.

The Coalition, founded by BFC board member Vicki Nichols Goldstein, celebrated its first anniversary from near the continental divide that marks the top of the watershed for two of our oceans. Others joining the party included her deepness Dr. Sylvia Earle, BFC Ocean Explorers Roz Savage and Margo Pellegrino, the head of the U.S. Marine Sanctuaries program and many others.  Sherman’s Lagoon artist Jim Toomey and I did a talk and fast-draw exhibition on how locals could help save the ocean based on our 50 Ways to Save the Ocean. One way was to make wise energy choices. Boulder Mayor Susan M. Osborne and her sustainability director were there not only to acknowledge the work of the Colorado Ocean Coalition but also as an example of how a city can redirect its energy use to clean renewable energy. 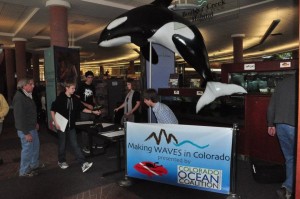 Among locals participating were Peter Benchley Ocean Award (and Oscar) winning director Louie Psihoyos and his Oceanic Preservation Society, Teens4Oceans, Denver Zoo, Windhorse Lightships, Ocean First Divers, Photographer John Weller and members of the Colorado Underwater Photographers Society. Bet you didn’t know Colorado is supposed to have more scuba divers per capita than any other state. Other groups there included GOOGLE Ocean, 5 Gyres, Sea Stewards, The Ocean Foundation, and Plastic Pollution Coalition. Talking to many locals drawn by the super-energized organizers and local media coverage it was clear that while this new seaweed group’s event might be high and dry, it was also inspiring. Plus it may have been Colorado’s largest ocean event in 30 million years.
Top

Octopi the Streets
7,000 ‘Occupy Oakland’ protestors shut down the Port of Oakland November 2 to demand a fairer economic system.

12,000 protestors surrounded the White House on November 6 to oppose an oil sands pipeline that would run Canada to the Gulf of Mexico. Ocean activists are giving mixed to negative reviews to the Obama administration’s 5-year offshore drilling plans released November 8 that seem inconsistent with his National Ocean Policy. As public discontent with the status quo grows, it’s important to reflect on how we can better communicate the potential of our public seas to create millions of sustainable jobs and healthy communities for all. Another reason to be involved: our movement has the coolest polar bear, dolphin, turtle, fish and jellyfish costumes.
Top

The night Irene hit was awesome, and in the morning the impact could be seen and felt all around the D.C. metropolitan area. No story was too small to be excluded from local news coverage and it was all decidedly bad. But is it? If nature’s power doesn’t register as an electrical outage, downed trees or an insurance claim, our awareness of its impacts goes largely unaccounted for.

As an undergraduate at William and Mary, I came to know the Chesapeake Bay and its estuaries, as a student, a fisherman, and an admirer. I spent my free time each summer in my friend Sean’s 18-foot sports boat, taking his depth finder and trolling the deep, cooler channels of the James River and the Bay for stripers. Between class and relaxation, I spent enough time to feel the effects of the annual green and brown algal blooms. If you’ve seen and smelled the decaying algae, the fish kills, and floating bodies of migratory and native birds, you know the nightmarish effects of the “dead zones” they can create.

Every year, the summer heat and nutrient pollution from industrial farms, cities and over-fertilized lawns causes massive algal blooms that prevent sunlight from penetrating deeper waters. Following these blooms the algae decays and is broken down by bacteria which use up the oxygen in the water, resulting in a dead zone that has characterized the Chesapeake Bay for the last 40 years. However, this year was slightly different, Irene’s path brought winds and tides that mixed waters of varying oxygen levels, bringing an early and temporary end to the dead zone which typically disappears gradually as the waters cool in late September and early October.

For as many people whose livelihoods directly and indirectly depend on the Bay I couldn’t understand why this never gained as much attention as Irene’s destruction, but it also begged the question, what else is going unnoticed? As an extension of the ocean, hurricanes dissipate heat, and we

owe the luxury of temperate climates to that; from the Tropic of Cancer to the Arctic Circle, we’ve all noticed the effects of rising sea temperatures. And while we take note that our hurricane season has begun to start earlier, last longer, and produce more intense storm-events, we should also be thankful to the degree they also reverse the damages we’re causing.

I remember the day after Irene passed, walking around, my thoughts drowned out by the sound of power saws, and remarking on how clean the air felt. It was like everything had been wiped clean. As for the Chesapeake, they’re recording the fourth highest juvenile striped bass count since the census began 58 years ago. Devastating?
Top

Seaweed Spotlight: Oregon Shores Conservation Coalition
A new regular feature of Blue Notes where we shine the light on a group from the Blue Movement Directory in order to create a more self-aware and collaborative movement.

“We have some good laws in Oregon with public shoreline (ownership) and land use planning and our job is to see they’re enforced,” says Oregon Shores Conservation Coalition Executive Director Phillip Johnson. OSCC, with a staff of two and a half and hundreds of volunteers, works to preserve “the natural communities, ecosystems and landscapes” of the Oregon coast while assuring public access. Among their efforts is the Climate Change Adaptation Project which held the third in a series of talks on November 9 titled “Coastal Forests and Climate Change” with a panel of experts in Lincoln City, a coastal town of 8,000 located 88 miles from Portland. OSCC also has programs on marine reserves and renewable ocean energy.

Their ongoing battles include a fight to protect Crook Point in southern Oregon from being developed as a golf resort. Along with local activists they beat back a similar plan to have the state trade off a scenic headland at Flores Lake State Park for another golf resort. They are also fighting gravel-mining operations that threaten coastal rivers. One of their most unique efforts is CoastWatch, a citizen monitoring program where volunteers adopt a mile-long segment of the 362 mile coast looking for natural changes and human-induced impacts and sounding the alarm when necessary. “We’ve got close to 1,300 mile adopters,” Johnson notes proudly.

One of these coast watchers, Steve Bauer, has to descend a cliff by a rope to get to his mile, #305, near Tillamook that includes coves and caves only accessible at low tide. A few years ago he helped sheriffs and the Coast Guard find and recover part of a fishing boat that had sunk. Other coast watchers report on stranded sea lions, salmon sharks, changing seasons and changing patterns of development that they share with each other, the coalition, government agencies and the public. To learn more or volunteer, contact OCSS.
Top 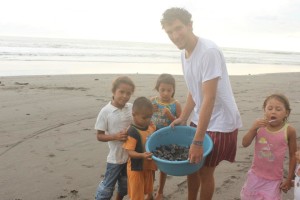 grassroots group that uses sea turtles to engage coastal communities in wider conservation practices. He went down there five months ago to help protect the Olive Ridley sea turtles that nest along the beach. He spent the first weeks helping sand-bag a village getting inundated by a month of high waves. Now that nesting season is underway he walks 11 miles of beach every night looking for nests in the sand. For every 6 or 7 nests harvested (legally, no less) he might find one undisturbed and move its eggs to a makeshift hatchery he’s helped create. He and others are also working with local egg collectors to shift their focus to turtle ecotourism. (See Zander’s TedxTeen talk.) To get in touch with Zander, find him on Facebook under Turtle Talks or e-mail him.

UR CALENDARS: DATE CHANGE  The date of the 5th annual Peter Benchley Ocean Awards has been changed. They will now be taking place at the California Academy of Sciences in San Francisco on the evening of Friday, June 1, 2012.

NOMINATE  And don’t forget, if you have an Ocean Hero you’d like to see win in one of the 2012 award categories, nominations are still open through the end of the year. Submit yours today.
Top

Blue Frontier Campaign grew out of a book I wrote 10 years ago. I’ve just released the updated 10th anniversary edition of Blue Frontier: Dispatches from America’s Ocean Wilderness as an e-book. It includes new reporting on the BP disaster in the Gulf, the Obama administration’s National Ocean Policy and offshore energy policies, new ocean science, etc. It’s just become available on Kindle, Nook and all other platforms. A dollar from each sale will go to support Blue Frontier Campaign. Thanks in advance for your download.
Top

Or Give a few Clams

A big thanks to all who contributed to BFC on Give to the Max day. You were among 17,838 people who gave “to the Max” on November 9th and helped raise $2,034,434 for nonprofits in the greater Washington area! If you like Blue Notes please consider making a small (medium or large) contribution. Even a fin would help.
Top