Wednesday January 13 marked “Wear Blue for the Oceans Day,” that grew out of a Blue Frontier strategy meeting in support of a Strong National Ocean Policy (see the last six Blue Notes). Colorful rallies were held in a dozen cities across the nation including Washington D.C., San Francisco, New Orleans, Cambridge and Anchorage.  300 ocean lovers and charter school students participated at the State Capitol in Honolulu, as did students in California, Colorado, Massachusetts and elsewhere.  In Portland Oregon Voodoo Doughnuts produced blue treats for the day and in New Orleans a blue dolphin highlighted a local press conference reported on by the Times Picayune.  In San Francisco, where Philippe Cousteau and several elected officials spoke to a crowd of 75 (including a costumed shark), the Board of Supervisors introduced a resolution calling on the President to issue an Executive Order for an ecosystem based national ocean policy. Cartoonist Jim Toomey ran a three-day ‘Wear Blue’ series in his ‘Sherman’s Lagoon’ comic strip that helped inspire additional actions and group photos linked by a wearblueforoceans website, facebook and twitter accounts (an online feeding frenzy).  Pix came in from various marine labs, conservation and agency offices and a group of divers floating off the Kona coast in Hawaii, also from Iceland, Canada and Belgium. 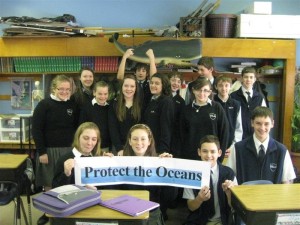 In D.C. we attended a gathering of 75 people in “Protect Our Oceans” blue tee-shirts (pulled over our winter coats), also in fish costumes and carrying colorful placards and inflatable globes.  We gathered in Lafayette Square in front of the White House to support a meaningful ocean policy. Among the speakers were Jim (whose ’50 Ways to Save the Ocean’ crab and fish characters, Clawdia and Finley, were icons of the day).   “We’re here to demonstrate America cares about its oceans and Great Lakes,” he explained.  “It’s more than amber waves of grain, it’s also blue.   We’re here to ask the president to issue an executive order to take a more unified approach to ocean policy based on science and the boundaries of nature.” 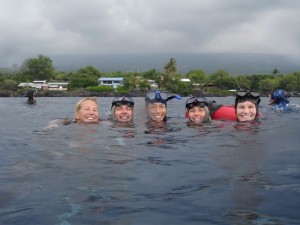 Other speakers included explorer David Guggenheim (“The Ocean Doctor,”) Sean Cosgrove of the Conservation Law Foundation, Julie Lawson of Surfrider’s D.C. Chapter, Wendy Benchley and myself.  I admitted it was a personal adjustment to rally in favor of the government and have people in government who not only know what they’re talking about, but listen to the people.  The group then marched across the park to pose in front of the office of the White House Council on Environmental Quality whose chair, Nancy Sutley, is leading the President’s Ocean Policy Task Force.  A T-shirt was given to her assistant to pass on to her. 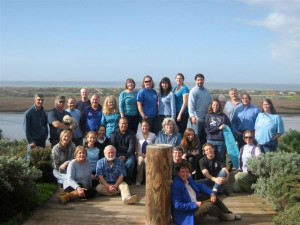 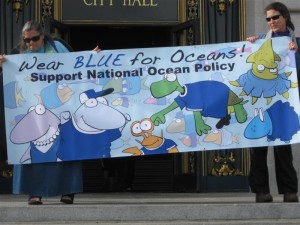 We’ll be looking for a final report from the task force in February and an Executive Order from the President shortly thereafter.  If you’re organization hasn’t joined the 100 other groups already signed on to a letter of support for an ecosystem friendly blue policy please contact Megan Mackey for a review copy you may want to sign.  Contact her at megan_mackey@speakeasy.net.  Deadline is Feb. 10.

Seven years ago Blue Frontier’s first intern Jeff Oppenheimer learned html and jury-rigged a website for the Blue Frontier Campaign.  Yesterday, Feb. 3, 2010 www.bluefront.org was re-launched with help from web designer Ivey Doyal and BFC’s Viviana Jiménez.  Our new site should be more dynamic with more blue news, marine policy analysis, activist guides, pictures, videos, projects and other useful tools including an updated Blue Movement Directory which we soon hope to expand from a U.S. to a global seaweed activist guide for our more than 15,000 monthly website visitors. One other change we’ve begun – you’ll note this Blue Notes was sent to you not as a rambling long picture embedded email but as a shorter email with a link to its new online posting site.

Why Scalia Hates the Ocean 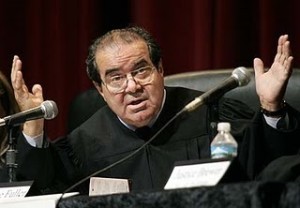 On January 21 the Supreme Court’s conservative majority voted 5-4 to overturn a century of precedent that has set limits on corporate control of elections.  It ruled that Corporations can now spend as much as they want supporting or opposing candidates in federal elections.  So, while I might support a candidate who opposes offshore drilling, Exxon is now free to drop a few million, or tens of millions, to unseat that same candidate.  The plastics or fertilizer industries can now more easily target elected officials who support legislation to limit coastal runoff of waste and pollution and the real-estate industry (once it revives from its last burst bubble) can go after those who would protect salt marshes and other coastal habitats that act as marine wildlife nurseries, pollution filters, carbon sinks and storm barriers if that industry prefer they be bulldozed and built on for water view mansions and high-end resorts.

I could go along with the idea that giant corporations have the same free speech rights as I do if the court would also confer on average citizens some of the unique privileges of chartered corporate entities, such as immortality or immunity from physical pain.  You’d think our democracy, like some of our banks, would be too big to fail but I’m not sure I see any bailout from this latest threat to citizen participation or our public seas.

Why Pandora is Blue

Any diver or marine scientist who sees James Cameron’s Avatar recognizes where this long time director of ocean films both fictional (The Abyss) and documentary (Aliens of the Deep) got much of his three dimensional inspiration.

From the floating air jellies to the red tube-worm like blossoming jungle flowers to the marine phosphorescence that brightens much of Pandora’s biological abundance, Cameron, the diver and ocean explorer, has taken inspiration he found in our ocean depths and transformed it into an awe- inspiring computer generated jungle world that reflects both the challenges, threats and promise of our own blue marble planet.

What more can I say?  It’s the best $300 million anti-corporate, pro-nature, cultural diversity and action-adventure film ever made.

U.S. Coast Guard Commandant Thad Allen recently told me he worries about the impact of foreign fishing fleets on areas like Micronesia that don’t have their own Coast Guards to protect their fish stocks from predation by foreign fishing vessels.

The coast of Somalia and the Horn of Africa is another area where foreign fishing vessels from Europe, China and the Middle East were until recently decimating ocean resources, making it hard for local fishermen (and fish) to survive.  Some of the Somalis then turned pirate.

Now a report from 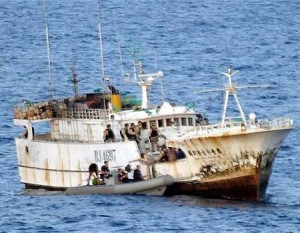 the Associated Press says one surprising result of the scourge of piracy besetting the shipping lanes off East Africa is that the illegal foreign trawlers have fled in fear (except for a Chinese Trawler recently seized by the pirates), resulting in better catches for local shore-based fishermen as well as sports fishers.  “We had the best marlin season ever last year,” one Kenyan sports fishing guide reported.

The recovery of fish and other marine wildlife in recent years seems too often related to wars (there’s great diving off Eritrea and Mozambique) the forced isolation of pariah states (Southern Cuba has the greatest marine biodiversity in the Caribbean, Libya has the most pristine coastline on the Med) and now piracy.  When peace, safety and reconciliation pose threats to ocean life its time we rethink what we’re doing.  We need better options, including science-based global agreements to protect and restore edible fish stocks and other marine wildlife and large no-take ocean wilderness parks to ensure survival of unique marine habitats and living genetic diversity in a warmer more acidic ocean.  And we need well-trained Coast Guards to enforce these agreements.   In the U.S. I’d like to see a Department of the Ocean established made up of NOAA and the U.S. Coast Guard.  NOAA could do the science and policy and the ‘Coasties,’ provide the firepower to make those policies stick.