In this issue
Will the next President be good for the fish?
Home Waters
Bipolar Activity
Seaweed Spotlight: Florida Oceanographic Society
Peter Benchley Ocean Award Video

Will the next President be good for the fish?

While President Barack Obama and Governor Mitt Romney may differ widely on ideology they share one thing in common. To date neither presidential candidate has mentioned coastal and ocean issues in their campaigns. And so on August 14 a letter was delivered to their campaigns signed by 60 leaders in marine exploration, conservation, law, science, art and business calling on them to recognize the economic and environmental benefits of America’s coasts and oceans and asking them to commit to four broad principles and actions.

In the international arena these include supporting global initiatives and agreements to restore fish and wildlife, reduce pollution, establish marine wilderness parks and encourage scientific collaboration.

Domestically it calls for an ocean policy to coordinate the work of federal agencies responsible for the ocean with local, state and regional efforts now underway to assure healthy waters and sound planning for our public seas. It also calls for adequate funding of front line agencies involved in marine stewardship, exploration and law-enforcement including the U.S. Coast Guard and National Oceanic and Atmospheric Administration.

As leaders and representatives of millions of concerned Americans the signatories look forward to the candidates’ responses and will share that information once it becomes available. The full letter that Blue Frontier Campaign coordinated can be found here.
Top

At the local level, Tuesday, July 31, saw the Richmond, California, City Council vote unanimously to use $154,000 of settlement money from the 2007 San Francisco Bay Cosco Buson oil spill (see Blue notes #40) to reopen the Point Molate Beach. The beach, the largest in the city, has been gated and locked for eight years due to lack of city funding. In April, Citizens for a Sustainable Point Molate (CFSPM), a project of the Blue Frontier Campaign, held an Earth Day clean up of the beach in anticipation of families returning to the natural treasure that is Point Molate. Earlier CFSPM had played a key role in helping stop a plan to convert Point Molate into a private mega-casino 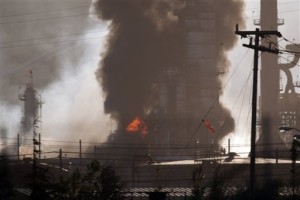 (see Blue Notes #81). Unfortunately on Monday, August 6, disaster struck on the other side of the Point Molate peninsula when a petroleum unit caught fire at a 110-year-old oil refinery. This makes me wonder how NASA engineers can not only land a robot vehicle on Mars but take a picture of it parachuting to the surface from another spacecraft, yet Chevron engineers down the street from where I live can’t prevent two major fires at their refinery within five years (or 3 within 13)? I’ve visited a few refineries including this one and can confirm oil-refining technology predates Mars landings.

In the 1990s Chevron ran a ‘People Do!’ ad campaign in which they took credit for environmental mitigations they were required to carry out under laws they’d lobbied against. Today Chevron has a new series of ads titled, ‘We Agree. Do You?’ Among their affirmations, ‘The world needs more than oil!’ Certainly a wind spill from a turbine farm would not have sent over 1,000 people to area hospitals, as did the black smoke plume of toxic hydrocarbons from Chevron’s petroleum fire. ‘It’s time oil companies get behind the development of renewable energy!’ Chevron also suggests. It sounds right in principle, just like it’s time the Tobacco Industry get behind cancer prevention. Chevron brags about reducing their carbon emissions from their refineries, which is kind of like bragging about reducing gun violence at the Colt firearms factory. In their public relations (if not their core operations) they and their partners have also committed to low-carbon transportation fuel, “even if that answer doesn’t come tomorrow.” No, what came the day after the fire was a 25 cent spike in California gasoline prices (that are still rising) taking us back up over $4 a gallon. This is in part due to the loss of some of the Richmond plant’s 240,000-barrel a day refining capacity that produces about a third of the California blend of gas. This blend is designed to meet the higher air quality standards of the state which raises another question – why isn’t that the American blend? Since when did clean air become a regulatory burden to the other states? We can only hope that Chevron’s short term retail profits at the gas pump will help shelter them from the sting of public criticism just as the sirens going off every half hour August 6 reminded me and thousands of other residents to shelter in place. What really bothers me is that little kids in low-income neighborhoods of Richmond already knew what shelter in place meant. Unfortunately even if Chevron’s refinery safety finally improves those kids and their parents are still in trouble – as is our bay and ocean. 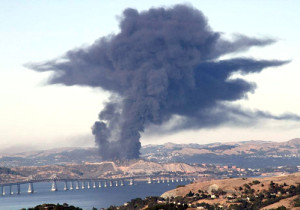 Living in the cooling fog and occasional gassy haze of the Bay Area it’s sometimes hard for me to remember that this past month was the hottest in U.S. history or that 9 of the 10 hottest years on record have occurred since 2000 and the 10th was 1998. A study just out from NASA reveals that the extreme summer heat we’re seeing, including the dustbowl like drought are linked to fossil-fuel fired climate change as are rising seas (at least 3-6 feet by the end of the century), loss of Arctic sea ice and ocean acidification that reduces the amount of dissolved oxygen and number of shell forming critters in the ocean. Now reasonable folks at Chevron and other oil companies may disagree with these latest findings, but they didn’t land an autonomous wheeled laboratory on Mars, NASA did. All Chevron did is let their #4 crude unit in Richmond blow up and poison our air and water.
Top

Bipolar Activity
As hot as it is globally scientists have long predicted climate change will be most pronounced in the polar regions and this has been demonstrated by the rapid loss of summer sea ice in the Arctic and dramatic warming along the Antarctic Peninsula where I once got to spend several months reporting on climate change. The bad news is the melting caused by fossil fuel use has inspired a new “cold rush,” to drill for more oil in the newly opened waters of the Arctic, including Shell’s planned drilling in coming weeks approved by the Obama administration.

The good news is there are strong alternatives being promoted. Along with campaigning against Shell in the Arctic, Greenpeace has started a global petition with over 1.3 million signatures to date to declare a global sanctuary in the Arctic protecting it from extractive and military uses just as the Antarctic Treaty does in the southern hemisphere. The petition can be found at savethearctic.org.

At the same time the Antarctic and Southern Ocean Coalition is having some success expanding protections for Antarctic waters. They’re campaigning to fully protect the Ross Sea south of New Zealand as part of a network of Marine Protected Areas for the Southern Ocean encircling Antarctica. ‘The Last Ocean’ a documentary on overfishing in the Ross Sea by New Zealand director Peter Young powerfully

visualizes the urgency of this campaign (watch the movie trailer).

This October at a meeting of the Commission on the Conservation of Antarctic Marine Living Resources that includes 24 nations and the European Union the U.S. and New Zealand are expected to introduce a plan to establish a Ross Sea Marine Protected Area.
Top

Seaweed Spotlight
A regular feature of Blue Notes where we shine the light on a group from the Blue Movement Directory in order to create a more self-aware and collaborative movement. This month we feature the Florida Oceanographic Society.

Returning to the warm and muggy, our 14th group to come under

the seaweed spotlight reminds me of a bit of old Florida amidst that state’s coastal sprawl. The Florida Oceanographic Society has been a part of Stuart Florida since 1964 including its slightly newer 57-acre Nature Center located on Hutchinson Island with its 750,000 gallon Game Fish Lagoon full of tarpon, snook, sharks and sea turtles. About 100 miles north of Miami on the ‘Treasure Coast,’ the Society’s Nature Center draws some 55,000 visitors a year ranging from estuarine scientists to eco-tourists to local families. With a budget of $1.3 million, a staff of 23 and 250 volunteers the society has also become a major force in researching and restoring the mangrove and seagrass waters of the half million acre St. Lucie Estuary including waterfront oyster gardening and oyster reef restoration projects. In June and July they took about 400 people on nighttime turtle walks to observe hatchlings emerging from some of the 8,000 loggerhead turtle nests in the area.

“We have the most biodiverse ecosystem here with over 4,300 species of plants and animals so we never run out of stories to tell,” explains Oceanographic Society Executive Director Mark Perry who’s been with the group since 1978. One of their major efforts is educating the public on the need to restore the Everglades natural water flow north to south as it was before the St. Lucie Canal and other water diversions were built to ‘drain the swamp.’ For close to a century these diversions have damaged salt marshes, mangroves and oyster reefs with floods of increasingly polluted water and sediment. “We drain 1.7 billion gallons a day of fresh water that goes out to sea

that used to recharge our aquifer,” Mark points out. “We consume about 1.3 billion gallons a day so we’re wasting more fresh water than we’re consuming during a drought….Sometimes I wonder if we’ll ever have progress in my lifetime and then I see a kid at our touch pool getting excited and I have some hope again.”

He explains that their ray tank and touch pools are their most popular exhibits. “When you see a kid overcome fear and put a hermit crab in his hand and then want to learn more, that keeps me going. What I’ve found over the years is some of our own staff had worked through our teen ocean program and then went off to college and got marine degrees and came back to work for us because we really do inspire environmental stewardship.”

“And you live in paradise.”

“We sort of do but we don’t like to tell people about that,” he happily admits. “We just tell them it’s really hot here.”
Top

We’ve just posted the video from our 2012 Peter Benchley Ocean Awards at the California Academy of Sciences in June. Check it out! And of course feel free to repost or pass on Blue Notes. Also, if you’d like to contribute a few clams to BFC click here.
Top