What do a West African President, a pair of scientists studying life in the ocean, a twenty-year-old veteran of 4-H clubs, a Massachusetts Congressman, and two California women who spent over a decade working to create underwater parks have in common? They are among the winners of this year’s top ocean honors. The sixth annual Peter Benchley Ocean Awards, presented by Blue Frontier Campaign and marine conservationist Wendy Benchley, will take place May 15th in Washington, D.C. during Blue Vision Summit 4. The Benchleys are the only awards program dedicated to recognizing excellence in ocean conservation solutions across a wide range of categories including science, policy, media, youth and citizen activism.

This year’s winners were selected from among dozens of highly qualified candidates whose names were submitted to the selection committee.

We are please to announce the recipients for 2013.

For Excellence in National Stewardship – President Macky Sall of Senegal
As one of his first acts after his election in 2012 President Sall rescinded all foreign fishing permits in his nation’s Exclusive Economic Zone. Within months of his action thousands of local fishermen were seeing their catches dramatically increased and their families and communities restored. President Sall is now moving forward with plans to assure a sustainable domestic fishery free of foreign exploitation, creating a resource management model for West Africa and the world.

For Excellence in Science – Boris Worm + Heike Lotze
Working both separately and in collaboration this husband and wife team of scientists from Dalhousie University in Canada have continued to expand on the work of the late Ransom Meyer, the first Benchley science award winner. Through their extensive body of work they have significantly increased the world’s knowledge about the changing abundance and diversity of the planet’s fish and marine wildlife populations and the impact of nutrient pollution and other human activities.

For Excellence in Policy – U.S. Representative Ed Markey
Representative Markey (D-MA) has a strong record of support for the oceans including as a critic of offshore drilling and outspoken critic of BP during its oil blowout in the Gulf of Mexico in 2010. He has promoted legislation to address climate change and ocean acidification, supports sustainable fishing policy and, as the ranking member of the House Natural Resources Committee has been a strong defender of National Ocean Policy, the Clean Water Act and other environmental protections.

In 1999 leading ocean scientists and communications professionals established COMPASS to train marine scientists in communications skills needed to talk to the media, the public and policymakers about their findings. As the long-time Ocean Science Outreach Director for COMPASS Nancy Baron has played a pivotal role in establishing strong links between thousands of scientists and journalists so that changes and discoveries in our seas become news and information we can all use.

Christopher Benchley Youth Award – Sean Russell
Twenty-year-old Sean Russell became aware of the problem of marine plastic pollution as a high school intern at Mote Marine Laboratory in Florida. In response he founded the “Stow It-Don’t Throw It” project, a statewide monofilament fishing line recycling program and collaborative effort between youth and environmental groups that has since gone national. In 2011, with the help of Mote Marine Lab, Sean led the first Youth Ocean Conservation Summit held in Florida that inspired the creation of the activist Youth Ocean Conservation Team (YOCT). He has also given countless hours to community service projects while serving as a member of the Florida 4-H Program. Sean is now a senior at the University of Florida.

Hero of the Seas – Karen Garrison + Kaitilin Gaffney
They have worked together for more than a decade leading the effort to create, design and implement California’s 1999 Marine Life Protection Act (MLPA) that, following a long and arduous process, has resulted in a world-class system of ocean wilderness parks. As of late 2012 these Marine Protected Areas (MPAs) cover some 16 percent of California state waters. While working for the Natural Resources Defense Council and The Ocean Conservancy Karen and Kaitilin kept their focus on grassroots organizing. In the words of California Secretary for Natural Resource’s John Laird, “They were incredibly successful in persuading others to their view because they listened to people’s concerns, and worked with them to find solutions that worked for all…their contribution to our blue ocean and to the communities that depend upon it is monumental.”

Hopefully hundreds of you will join this year’s winners at the Carnegie Institution in D.C. on the evening of May 15. The awards ceremony will be free and open to the general public. The awards dinner will be a ticketed event and not included in Blue Vision Summit 4 registration. Tickets will go on sale in February.
Top

Join the Tour for The Golden Shore
Karen and Kaitilin’s (and California’s) recent ocean victory was followed by President Obama’s expansion of two of California’s National Marine Sanctuaries that will extend protection from offshore oil drilling along the Sonoma and Mendocino coastlines north of San Francisco, a legacy to retiring Congresswoman Lynn Woolsey and her constituents. These protections are consistent with what I call the “California model”of ocean use where a democracy of public interests tends to generate the best environmental solutions to the challenges we face on our public seas. It’s only when a single industry or interest dominates coastal decisions that things tend to go bad. How the Pacific has defined California and how Californians have learned to live well by the sea is the theme and topic of my new book, The Golden Shore – California’s Love Affair with the Sea, available February 19th from St. Martin’s Press. Below are my book tour speaking dates so far. I hope ocean lovers and seaweed activists reading this will be able to join me. For any additional information or speaking opportunities contact me at helvarg@bluefront.org.

Seaweed Spotlight
A regular feature of Blue Notes where we shine the light on a group from the Blue Movement Directory in order to create a more self-aware and collaborative movement. This month we feature the Ocean River Institute.

ORI is a seaweed group after my own heart in its stated belief that “many environmental issues can be addressed best by people taking action in their own communities and regions, not by national or international entities.” Founded in 2007 by educator and scientist Dr. Rob Moir, who has been Curator of Education at the New England Aquarium and President of the National Marine Educators Association among other things, ORI with its 3 person staff works like a blue SWAT team facilitating grassroots efforts, aiding local groups by providing them needed expertise, services, resources, and information around Ecosystem-based ocean management, river science, environmental justice and projects in Florida, the British Virgin Islands and its home state of Massachusetts. Here’s a few examples: 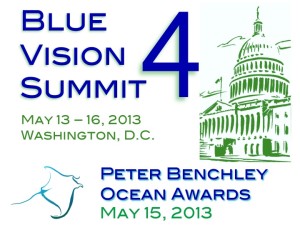 Like what you read? Support Blue Notes by dropping a few dollars in the hat and/or reposting, forwarding, tweeting, sharing or +1ing them.
Got an idea or a response? Let us know. We value your feedback. Thanks in advance!
Top