What do Dr. Sylvia Earle, Dr. Jane Lubchenco, Senator Sheldon Whitehouse, Representatives Ed Markey and Sam Farr, a syndicated cartoonist, a coast guard admiral, a port director, an oyster farmer, a young sub pilot and a coastal paddler all have in common? They, along with hundreds of other ocean champions, will be participating in Blue Vision Summit 4 this May 13-16 to send a message to our nation’s leaders in Washington: “Now is the time. Our oceans are rising and our voices are too!”

This year’s Blue Vision Summit and 6th annual Peter Benchley Ocean Awards represent both a challenge and hope for ocean conservation in the United States and across our blue marble planet. The challenge is what brings blue activists coming back to D.C. every two years, to educate our elected officials on the vital importance our public seas play in assuring the safety, security and stewardship of our nation. Representative Sam Farr of Monterey once told me that, “California is the one state where you can get elected or lose your job based on your position on coastal protection and offshore oil.” We need to spread that inspiration and fair warning to 49 other states and their elected officials. This year’s Summit will focus on three themes: responding to coastal disasters in ways that will protect the ecosystems that protect us all, making climate a blue issue and highlighting youth leadership for ocean conservation. We also plan to hold the largest Healthy Ocean Hill Day in history on May 15 with hundreds of people from across the nation meeting directly with their representatives on Capitol Hill to let them know we expect them to support a common sense ocean policy for the nation and stop slashing the budgets of frontline marine agencies like NOAA and the U.S. Coast Guard. We’ll also be encouraging them to support bills that fight both seafood fraud (mislabeling of edible marine wildlife) and illegal pirate fishing. This is something we’re obliged to do as citizens and legally permitted to do as non-profit educational groups, activists, businesspeople, scientists and youths. Among the most active participants we’re expecting will be scores of high school and college students and young explorers who love the ocean, are finding new ways to protect it and are joining us from New York, California, Florida and other areas, even Colorado because at 5,000 feet above sea level they too understand that, “every state is a coastal state.”

The hope for ocean conservation will be reflected in this year’s Peter Benchley Ocean Award winners that include President Macky Sall of Senegal, a West African head of state who chased foreign fishing fleets out of his nation’s waters, providing a huge boon for local fishermen and their families; ocean scientists Dr. Boris Worm and Dr. Heike Lotze from Canada who in expanding our knowledge of marine ecosystems are carrying on the legacy of the late Ram Myers, our first science winner back in 2004; Representative Ed Markey, an ocean champion of the House now running for a Senate seat in his home state of Massachusetts; Nancy Baron and COMPASS, a long-time ocean communicator and the organization she works with translating marine science into public understanding; Sean Russell, a young man from Florida who has challenged recreational fishermen to clean up after themselves and helped show them how; and two California women, Karen Garrison and Kaitilin Gaffney, who effectively have helped move the state’s park system into the water column where 16 percent of state waters have now been protected after more than

a decade of effort.

Please join them and other seaweed activists from around the nation and the planet to help us turn the tide for our ocean planet in the nation’s capitol this spring. Many thanks to our sponsors for making it possible to provide affordable registration fees and scholarships. Remember, we don’t know if we can win the fight for a healthy blue marble planet, all we know for certain is if we don’t show up for the fight we lose. Plan to join us and register today. 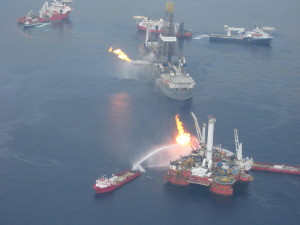 It’s been three years since the predictable BP blow out and massive oil spill in the Gulf of Mexico – predictable because of a lack of a safety culture within the company and any credible government oversight of drilling operations. In 2000, BP took me out to some of their deepwater rigs in the Gulf when I was writing my first ocean book, Blue Frontier. When I asked one of the rig bosses what would happen if there was a blow-out a mile or two below the surface his response was, “Guess we’ll find out when it happens.” Ten years later we found out and I got to see people I’d seen traumatized by Hurricane Katrina traumatized anew five years later. I also saw hundreds of oiled pelicans being scrubbed in Louisiana and close to a hundred dolphins and a humpback whale trapped and dying in oil slicks that stretched out to the horizons off Alabama.

Today new protections against the next oily disaster are about as effective as new laws protecting us from the next Wall Street bubble bursting, which is to say not at all. 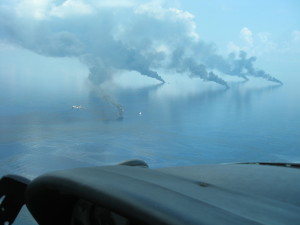 Even as watchdog groups like the Mobile Baykeeper and Gulf Restoration Network report new deaths of marine mammals, ecosystem disruptions and BP oil continuing to come ashore 36 months later, recent attempts to drill the frontier waters of the Arctic Ocean have run into early – and also predictable – trouble. Shell’s drilling test platform lost power and grounded this winter and the Coast Guard is now asking the Justice Department to investigate possible criminal negligence on Shell’s part. Meanwhile Exxon is busy minimizing media coverage of its pipeline spill in Arkansas lest people make the connection between that and the proposed Keystone XL pipeline. Until we break the political power of Big Oil in Washington, our seas and waterways will remain at grave risk both from oil pollution and the consequences of burning fossil fuels that includes loss of Arctic sea ice, ocean acidification and ever more severe hurricanes and typhoons. We’ll be hearing more about this at Blue Vision Summit 4.

A regular feature of Blue Notes where we shine the light on a group from the Blue Movement Directory in order to create a more self-aware and collaborative movement. With our gathering of the ocean folk so close we thought this month we’d just ask some Seaweed leaders from nine of the states that will be represented there why they’re coming to the Blue Vision Summit this year.

“Blue Vision Summits provide a great opportunity to meet others throughout the country who work to protect our oceans. These summits allow me to raise Gulf issues to a national level while working with other participants to support national policies critical to the protection of marine resources.” Cynthia Sarthou, Gulf Restoration Network, Louisiana

“The Ocean River Institute will be attending this year’s Summit because it’s a part of the thing we do every day: try to save the ocean. When our coalitions are broad and diverse with enough savvy constituents calling for responsible stewardship then the politicians will act and do right for all.” Rob Moir, Ocean River Institute, Massachusetts

“Being in Colorado, it is especially important to both maintain and grow our network, and the Blue Vision Summit provides that opportunity in spades.” Vicki Nichols Goldstein, Colorado Ocean Coalition, Colorado

“We are returning to the Blue Vision Summit this year to continue to promote our youth voices for ocean conservation” Erin Sams, Teens4Oceans, Colorado

“I’m excited to join ocean activists from around the country at the Blue Vision Summit. It’s time to take the message of the oceans to Washington, D.C.!” Peter Stauffer, Surfrider Foundation, Oregon

“I look forward to the Blue Vision Summit…to hear from those who are involved in quantifiable progress in marine conservation, scientific research and ocean management policy – to meet and speak with those who truly are making a difference.” Richard Theiss, RTSea Media, California

“The Blue Vision Summit is a great opportunity to learn and get together with fellow ocean advocates and let your local congressman and others know what’s important for our nation’s marine and coastal environment.” Paul G. Johnson, Florida Coastal & Ocean Coalition, Florida

“Way down here on the coast, we often forget we have partners working across the nation to protect our beaches. Joining colleagues at the Blue Vision Summit reconnects us, gives us hope and the knowledge that we can make a difference when we work together.” Casi Callaway, Mobile Baykeeper, Alabama

“The Blue Vision Summit is a one-of-a-kind gathering where ideas can start to become policy change in the course of a few short days.” Jim Toomey, Sherman’s Lagoon, Maryland
Top

From author Isak Dinesen: “The cure for anything is salt water – sweat, tears or the sea.”
Top