BLUE NOTES #113: The Next Generation of Heroes & More

The Next Generation of Heroes The tragedy of the 19 Hotshot firefighters from Prescott Arizona killed battling a sudden blaze in the ongoing heat and drought of Arizona and the Southwest on June 30 rightfully deserved the nation’s attention and respect. Unfortunately their sacrifices will not be the last among a new generation of warriors on the world’s environmental, industrial and oceanic frontlines.

For thousands of years, warfare has been the main rite of passage by which young men proved themselves as warriors and heroes, going on to become leaders of our clans, tribes and nations. Today, given the interdependence of an increasingly crowded planet, and faced with growing impacts from extreme weather, including historic drought, heat waves, wildfires, increased tornado activity and coastal storms and flooding linked to climate change, also bombings, migrant surges, industrial disasters and pandemics, we are finding new heroes deserving of our respect and honor among our first responders. 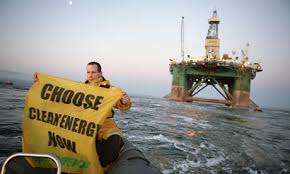 In the future our warriors and leaders may more often emerge from the ranks of young men and women willing to go in harm’s way to confront an expanding range of catastrophes in unusual and dangerous settings from the algae choked beaches of China to the burning islands of Indonesia to the floodwaters of Europe to the blazing hills of Arizona and California. Their ranks include firefighters, Coast Guard and rescue services, cops, Lifesavers, Greenpeace campaigners, Doctors without Frontiers and of course the 19 brave men who lost their lives on the Arizona fire line last month.

No doubt wars will continue to distract us from the essential work of the 21st century. But despite the instability we leave behind in Iraq and Afghanistan and the ongoing and horrific bloodshed in Syria, Pakistan and elsewhere, the key global conflicts and frontlines of today have moved away from the traditional military battlefield.

The outcome of the next major global conflicts for clean energy, potable water, arable soil and healthy seas could be the real game changer for society. It’s going to be a rough transition to a sustainable blue planet for ten billion people if we even manage to avoid a civilization destroying catastrophe. And while wildfires, hurricanes and high seas can be adrenalin charged, they don’t have the same insidious attraction as warfare. After all, war gives armed men a sense of control over life and death. Environmentalism only teaches us where we fit into that cycle – and it sometimes takes the lives of those brave enough to attempt to restore the balance.
Top

The Next Generation of Ocean Power

On the 4th of July weekend, while we were celebrating our independence from Britain, the Prime Minister of Britain inaugurated the world’s largest offshore wind farm that can power half a million homes. Denmark now gets a quarter of its power from mostly offshore wind and wants to double that by 2020.

When will we declare our independence and freedom from Big Oil? It started in an extremely modest way on June 13 when the first U.S. offshore wind turbine, a floating model designed for deep water deployment hooked into the U.S. power grid. The 65-foot floating wind turbine launched in Castine, Maine, is a 1-8th commercial prototype designed by the University of Maine’s Advanced Structures and Composites Center with support from the State and $12 million from the Department of Energy. Eventually they plan commercial arrays of turbines 20 miles offshore where the winds are strong and potential coastal conflicts few. The Cape Wind company’s conflicts with Cape Cod residents a decade ago proved a setback for offshore wind in the U.S. but also led to the creation of the Massachusetts Ocean Advisory Commission. Plans are now moving forward for wind farms off Massachusetts, Delaware and Maryland. In Maine, a Coast Guard small boat station receives about 60 kilowatts of power from a barge-like tidal power generator located 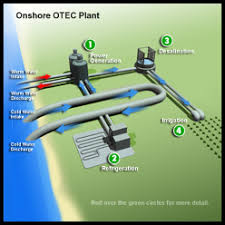 on the huge tidal bore of the Gulf of Fundy. On the West Coast and in Hawaii the Navy has been working on wave power generated systems as has a public-private partnership off Oregon though nothing at the scale of the commercial Oyster wave generator being installed off Scotland that can power 30,000 homes.

Having proved the viability of OTEC, Ocean Thermal Energy Conversion, at its Natural Energy Lab on the Big Island where the temperature difference between cold deep water and surface water is used to generate electricity, the State of Hawaii inexplicably pulled the plug on its power plant several years ago. So now, with the U.S. having proven the concept, China is moving forward with a major OTEC project with technical support from Lockheed Martin. Obviously the U.S. is not exactly leading the pod when it comes to advancing clean blue energy. Part of this has to do with the stranglehold oil and gas has on U.S. offshore energy policy and part can be attributed to what I call NOBO, Not On my Bay or Ocean resistance, the maritime equivalent of Not In My Backyard (NIMBY) resistance to many planned onshore solar and wind turbine projects. This is not to say that offshore wind, wave, tidal, current or OTEC projects might not pose a threat or do harm to existing fishing grounds, coastal views, marine wildlife, national defense training or shipping routes, even standing waves and point breaks favored by surfers. But that mostly has to do with where they are sited. That isn’t an argument against their placement but rather for local citizen participation and ecosystem based marine planning by government and various other coastal stakeholders just now being implemented by the National Ocean Policy and regional programs. At the Blue Vision Summit in May, during the Making Climate a Blue Issue panel, Mike Tidwell of the Chesapeake Climate Action Network talked about his group’s campaign that helped Maryland launch its move to well-planned and publicly supported offshore wind power. Being ocean advocates should include making sure that clean carbon-free ocean power becomes a viable alternative to offshore oil and gas. After all, while oil can both foul a coastline and overheat a planet, no beach was ever destroyed by a wind spill or a rolling wave.
Top 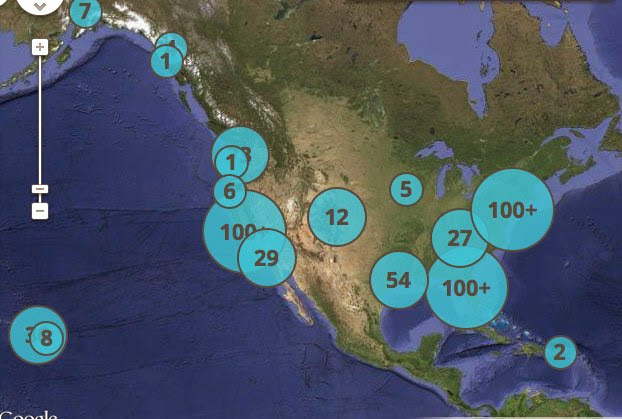 group from the Blue Movement Directory in order to crate a more self-aware and collaborative movement. Since the summer of 2011 Blue Notes has profiled more than 25 seaweed or marine grassroots groups and their leaders from Alaska to Baja, New England to Puerto Rico, also Colorado and Arizona because every state is a coastal state.

Sometimes I feel like I’m writing for Steve Colbert’s “Better Know a District,” his “435-part series of Congressional interviews,” only the Blue Movement Directory is more daunting, listing over 1,400 U.S. groups involved in ocean and coastal conservation. One of the first things the Blue Frontier Campaign did on getting established in 2003 was begin to create a user-friendly directory for every organization in the United States working on coastal and ocean conservation. This eventually led to The Ocean and Coastal Conservation Guide – 2005-2006, published by Island Press. This book project had the support of the Munson Foundation, Center for the Study of Responsive Law and Project AWARE. It also included a cover photo by Wolcott Henry and back cover endorsement by Leon Panetta. The large-format 193-page Directory was divided into four sections: Blue Groups, Government Agencies, Marine Schools and Science Centers, and U.S. Coastal and Ocean Parks. Each section was in turn broken down by state. You can still find copies of the guide in seaweed groups’ offices, foundation offices, science labs, university and government libraries (and for sale on Amazon).

Blue Frontier volunteers Diane Williams, Javier del Castillo and Jon Christensen and Blue Frontier Program Director Jean Logan were crucial in helping put it together. Jeff Oppenheimer, BFC’s first intern and webmaster then helped organize the guide as an online directory that became searchable beginning in 2006. Since then the online directory has become a valuable resource accessed tens of thousands of times and used to contact seaweed groups and others by potential volunteers, students, reporters, policymakers and to organize local and regional public meetings, for book tours, sign-on letters, academic research, etc. In the summer of 2012, we began updating of the directory’s contacts, links and information through research and contact with the listed groups. We will continue to do this until the directory is up-to-date. We’ve also partnered with BlooSee – an online and mobile platform that shares knowledge about the ocean – and are working to add all of the groups to a navigable map to make it easier for you to use. Use the Directory to dive into your state’s groups or just to surf the wild world of our growing blue movement for the ocean, coasts and communities that depend on them. And of course, if you don’t find your own blue group there you can submit it for inclusion.
Top

While July is a traditional vacation time for many people heading to the beaches and the shore it’s also been a great opportunity for a number of seaweed groups to stage beach clean ups, organize on-the-water events, hold fundraisers and/or just let their staff and volunteers get away to the coast and ocean they both love and defend, thus Blue Frontier will be closed July 15-22.
Top

Happy Birthday to Us Speaking of summertime blues, check out our tenth anniversary letter and funding appeal that went out last month. We’re proud of what we’ve been able to accomplish in the last decade but still work to build an even more inclusive movement to turn the tide for our blue planet. We’re committed to growing the seaweed movement locally and globally in the year and years to come. As “Her Deepness” Dr. Sylvia Earle says, “Support for Blue Frontier translates directly to actions aimed at a better, healthier ocean…and for the future of humanity.” Thank you for your partnership and support over the years.
Top