In this issue
Whales 1, Pirates 0
A Day at the Beach for Point Molate
Shell: the BP of the North
Over the Blue Horizon
Heroes of the Sea – The Coasties and the Benchleys

On March 31 the International Court of Justice, meeting in the Hague, ruled that Japan has to end its annual whale hunt in the Southern Ocean of Antarctica which it’s long claimed is for scientific purposes.  At the same time Japan’s sold thousands of tons of dead whale meat for $60 a pound.  In recent years environmental activists including Sea Shepherd ships and their crews have actively opposed the killings, as recorded in the Animal Planet series ‘Whale Wars.’  The Japanese called the blockading activists “terrorists,” but it looks like they were the real lawbreakers all along.  The Japanese government says they will abide by the court’s ruling that protects the whales.

The court’s judgment is the result of an Australian legal action taken 4 years ago by former Environmental Minister Peter Garrett who before that was lead singer for ‘Midnight Oil.”  To quote from the band’s ‘Beds Are Burning,’ “The time has come, A fact’s a fact, it belongs to them, we’re gonna give it back!” 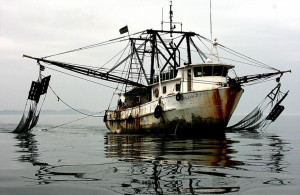 On May 15 2013 participants in the Blue Vision Summit’s Healthy Ocean Hill Day met with and asked 6 Senators (and many other Senators’ staffers) to ratify four treaties targeting illegal pirate fishing.  This April 4th the U.S. Senate unanimously ratified those four treaties.

Illegal pirate fishing may account for a third or more of the world’s catch of edible marine wildlife and marine mammal and seabird entanglement deaths.  These treaties will target the pirates both at sea and in their landing ports.

The co-chairs of the Senate Ocean Caucus – Sheldon Whitehouse (D-RI), Lisa Murkowski (R-AK), Mark Begich (D-AK) and Roger Wicker (R-MS) have long championed having the U.S. sign onto the treaties. The ratification vote was bipartisan and unanimous, suggesting that, even on Capitol Hill, sanity can win out and that the sea unites us all.
Top

A Day at the Beach for Point Molate 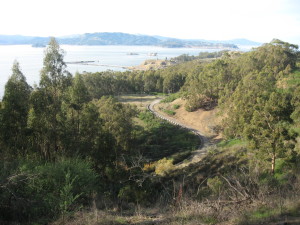 It’s been called, “the most beautiful part of the bay no one’s ever heard of” but the official opening of Point Molate Beach Park in Richmond California on April 19 will change that.

The beach, that’s been closed to the public for almost a decade, is just one part of the 422-acre Point Molate headlands also home to ospreys, owls, wild turkey, mule deer and 50 acres of offshore eel grass beds that provide habitat for both fish and shellfish.  It also contains a historic wine port (with a brick castle) that later became a navy fuel oil depot, before the Navy sold it to the city for a dollar in 2003.

For the next seven years Citizens for a Sustainable Point Molate (a project of Blue Frontier) led a successful battle to stop plans for a mega-casino development slated to be the largest gambling complex west of Las Vegas.  In 2010 Richmond voters cast their ballots 58% to 42% against the casino scheme – believing they could do better. 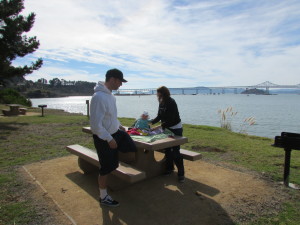 The controversy generated in those years has since been replaced by a sense of promise as Richmond looks to this natural treasure for new opportunities in recreation, tourism and youth education.

Blue Frontier will sponsor the first high school field trip to Point Molate with support from the Elmwood Café in Berkeley.  This will follow an Earth Day talk and drawing presentation at John F. Kennedy High School by myself and ’50 Ways to Save the Ocean,’ illustrator (and ‘Sherman’s Lagoon’ cartoonist) Jim Toomey plus an additional presentation that evening at MARE – Marine Applied Research & Exploration – in Point Richmond.  100 copies of our book will also be donated to the Richmond school system thanks to Elmwood Cafe.

Shell: the BP of the North

Given the new reports on the devastating impacts of fossil-fuel fired climate change from the U.N.’s Intergovernmental Panel on Climate Change (IPCC) and the latest U.S. National Climate Assessment, it’s hard to fathom why new offshore drilling proposals are still moving forward from the Atlantic seaboard to the Arctic ocean.  OK, it’s not that hard.  Money talks and the Supreme Court’s conservative majority just ruled that it can shout louder. 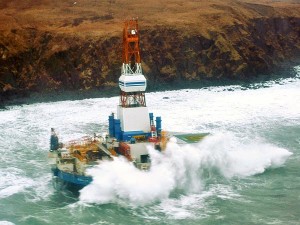 Still, along with the illogic of burning fossil fuel that melts arctic ice so you can drill for more fossil fuel in newly ice-free waters, there’s also the ongoing issue of pollution.  This was highlighted by the recent under-reported oil spill in the Houston Ship Canal that, like the Mississippi River spill earlier this year or BP’s massive 2010 blowout in the Gulf, or the ongoing oily destruction of Nigeria’s delta, just illustrates the industry’s willingness to write off pollution disasters as the cost of doing business.

Knowing the history of the industry is to advance into new frontier territories like deep and ultra-deep waters in the Gulf of Mexico and not worry about safety till after a major disaster, it’s easy to predict the next horrific environmental insult will come in the Arctic Ocean, if we let it.  The first major screw up has already been documented.

According to the final Coast Guard accident investigation report just released Shell’s “inadequate assessment and management of risks,” along with “potential evidence of negligent conduct” (read, illegal activity) resulted in the New Year’s Eve 2012/2013 grounding of the Kulluk, Shell’s massive $292 million oil exploration barge that broke loose from its towboat and went aground off an Alaskan Island during an attempted 1,700 nautical mile tow.  Part of the reason it was being towed from Dutch Harbor to Canada during the winter storm season was so Shell could avoid paying state taxes on oil equipment set to go into effect that January 1according to the report.

“This report shows that Shell ran through every single safety and common-sense red light in moving this rig because of financial considerations,” says Sen. Edward J. Markey of Massachusetts, formerly the ranking Democrat on the House Natural Resources Committee and also the 2013 Peter Benchley Ocean Award winner for Excellence in Policy. “This kind of behavior should raise major red flags for any future Arctic drilling plans,” Markey warned.  Shell has since suspended its attempts to drill in the Arctic Ocean this coming summer.
Top

Over the Blue Horizon

It seems like this would be an excellent time for the blue movement to demand an immediate end to all offshore oil exploration and drilling and a transition to properly-sited clean blue energy including offshore wind, wave and OTEC. 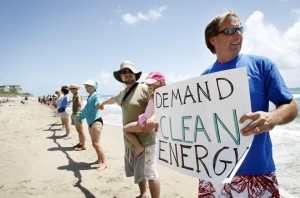 This is also the type of issue to be addressed at the ‘Over The Horizon’ (OTH) meeting set for June 18 at the Carnegie Institution in Washington D.C. with video-conferencing opportunities for participants from across the nation.  It will take place following a two-day conference on the global oceans, led by Secretary of State John Kerry.  The focus of OTH will be more domestic – how we make U.S. public seas into a high profile public policy issue by 2016.

Planning for OTH has begun with representatives from Blue Frontier, Surfrider, Waterkeeper, NRDC, Ocean Conservancy, Oceana, Greenpeace, Restore America’s Estuaries, Center for American Progress and the Ocean Foundation. We’re now seeking to open the discussion further to solution-oriented local, regional and national blue advocates.  It’s important to have everyone’s ideas and input if we’re to build the broad ocean coalition needed to turn the tide by 2016.  Contact us to get involved.

There was initial agreement that one challenge for our movement is to look beyond our immediate battles and consider what societal shifts we can achieve in the next two years.  How can we get ocean solutions to the level of debate now taking place around immigration, energy or health care?

Between now and the presidential election of 2016 we need to build the networks and alliances necessary to make our elected representatives take notice.  In California, “You can get elected or lose your job based on your position on offshore oil or coastal protection,” says Rep. Sam Farr of Monterey. How do we expand that level of popular connection between a healthy ocean, economic wellbeing and lifestyle across the nation?

At OTH, we will begin to develop strategy, including educational actions around the 2014 elections, targeting those contests where ocean issues count.  We’d also like to identify key focus areas for the 5th Blue Vision Summit and Healthy Ocean Hill Day visits with our elected representatives in Congress in May of 2015.  And we want to plan follow up work in our home waters leading into the 2016 presidential election cycle so that candidates can’t ignore the blue in our red, white and blue.

OTH might open with 1-2 hours of briefings from key folks involved in policy from the White House, House and Senate, Ocean Champions, Joint Ocean Commission, etc.

The meeting would then seek common ground on:

1. What are our mid-term goals and key public issues?

2. When/how do we partner with other marine interests for specific goals?

3. How can we expand our communications to leverage these goals?

4. How do we build our 2015 Hill Day and local fieldwork into an ongoing and powerful constituency by 2016?

If you or your group would like to be part of the “Over The Horizon” meeting this June as sponsors or participants – or if you’d like to be kept up to date through the planning process – please contact Blue Frontier Associate Director Jud Nirenberg at Jud@bluefront.org.
Top

Heroes of the Sea – The Coasties and the Benchleys 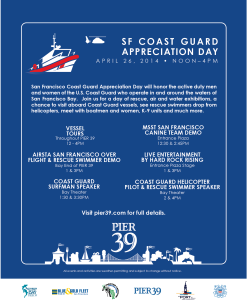 Ever since writing, ‘Rescue Warriors’ I’ve wondered why there are no big city celebrations of the Coast Guard when 14 of our 20 largest cities are coastal and the Coast Guard is America’s leading agency in enforcement of marine protection laws and regulations.   Blue Frontier has decided to rectify that by partnering with Pier 39, the Port of San Francisco, SF Aquarium of the Bay, Red & Gold Fleet and others for a fun day of boats, helicopters, K-9 Dogs, sea lions and celebration at San Francisco’s famous Pier 39 April 26 Noon-4

On May 30 we’ll be holding the 7th annual Peter Benchley Ocean Awards at the California Academy of Sciences in San Francisco.  Check out what happens when you bring 200 solution-oriented ocean lovers together to honor the most inspiring among us.  There are seven outstanding winners this year.  For more about them and the Awards go to: LINK.

And if you can’t make the Awards join us the next day at the Aquarium of the Bay for our first ever ‘Peter Benchley Bay to Sea Symposium’ – free to the public on May 31st.  Hear and ask questions of Dr. Sylvia Earle, Dr. Jane Lubchenco, Scripps Institution of Oceanography Director Dr. Margaret Leinen, Dr. Steve Gaines, Dr. Steve Palumbi and lots of other inspiring ocean friends and award winners past and present.
Top