In this issue
PBOA7 – “A tidal wave.”
Bay to Sea Symposium
Tomorrow’s New Horizon
Save the Date- Blue Vision Summit 2015
Restoring the Blue 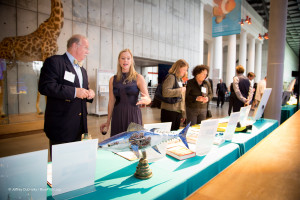 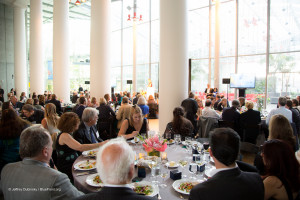 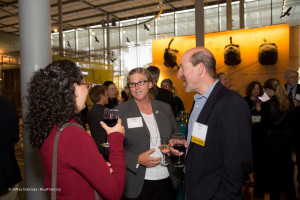 The winners came together with the directors of the National Aquarium, the Aquarium of the Bay, Hopkins Marine Lab, Marine Mammal Center, Mission Blue, Seakeepers, Greenpeace and close to 200 other ocean champions (including the director of ‘Ocean Champions’) at the California Academy of Sciences in Golden Gate Park.

The evening started with winners and seaweed rebels greeting each other, Leon Panetta hugging Jane Lubchenco, Louis Psihoyos explaining about his new movie ‘6’ (the global extinction crisis with elements of a Hollywood thriller).  Gabriela Cowperthwaite talked with her NASCAR driver buddy Leilani Munter whose ‘Blackfish’ racecar is painted to look like an Orca. While ROV pilot Dirk Rosen spoke to one of Leon’s Secret Service agents, Leon told me about the romance of growing up with sardine canneries in Monterey.   Although he was White House Chief of Staff, CIA Director and Secretary of Defense, he still counts creation of the Monterey Bay National Marine Sanctuary as one of his proudest moments. 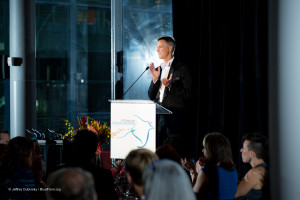 Soon we’re making our way to the elegant “swamp area” of the Academy as a new wave of people arrive and begin quaffing champagne, and we’re finding our way to our tables decorated with Hawaiian flowers and small dolphin sculptures.  The first course of our vegetarian gourmet feast is served and Wendy Benchley and I introduce the opening video on Peter Benchley. Wendy recalls “Peter and I were fortunate to be able to travel the world and see the amazing work being done by marine scientists, researchers, explorers, policy makers and photojournalists…many Benchley honorees over the years… in addition to being pleased by the recognition of the award…find great value and enjoyment in getting to know people who are passionate about the ocean but who come at it from entirely different perspectives.”

‘Sherman’s Lagoon’ creator Jim Toomey launches the festivities as this year’s MC.  All the evening’s winners and presenters’ give heartfelt talks that we hope to soon h 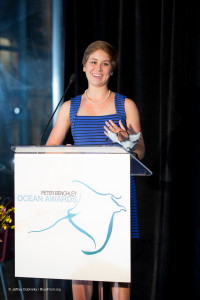 Jane Lubchenco introduces a video from Maria Damanaki.  She and Maria worked closely together to crack down on illegal, unreported and unregulated (pirate) fishing.  In her video statement, Maria Damanaki reminds us that while real progress is taking place, “we need to stand shoulder to shoulder to address the tremendous challenges that our oceans and seas are still facing.”

Sam Farr introduces Leon Panetta “It all starts with California’s love affair with the sea as well written in David Helvarg’s book, ‘The Golden Shore’” and I’m all but blushing until Leon reemphasizes how we need to move faster on marine protection as the threats to our seas are mounting.   “At a time of crisis over development, pollution, fisheries… we need to protect the oceans not just for the oceans sake but for life itself,” he points out.

In his acceptance speech, Dr. Steve Gaines, Dean of the Bren School at UC Santa Barbara explains that, “Everything I’ve done (on fishing reform, marine protected areas, etc.) is through putting together interesting teams.  Solutions come when teams of people combine skills but… we have to find solutions that grow faster than the problems.”

In introducing Gabriella Cowperthwaite, Louie suggests that when deftly handled “film is a weapon of mass construction,” while Gabriella, a first-time filmmaker recounts the surprising and ongoing response that her riveting ‘Blackfish’ on captive whales and corporate malfeasance con 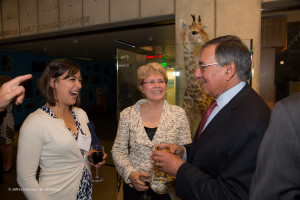 Long time sailor and this year’s  ‘Hero of the Seas’ Captain Charles Moore, who discovered the ‘Great Pacific Garbage Patch’ and founded the Algalita Research Foundation notes that, “We live in the age of plastic.  The annual consumption of plastic and the weight of the earth’s human population are nearly equal… I hear it expressed that somehow technological advancements will result in ways to clean up the ocean and create non-polluting plastics that will cancel the need for radical changes in our globalized economic and political system that creates megatons of  waste…I am not an optimist… (still) the raised fist Seaweed Rebel symbol must express our refusal to accept the status quo in its entirety.  There is a need for global change.  Heroes will make it happen!”

Perhaps 16-year old sea turtle activist and 2014 Youth winner Casey Sokolovic expresses most clearly what unites all 48 past and present Benchley winners and their dedicated supporters. “I have learned many lifelong lessons in my 8 years of activism — which is half my life…I’ve discovered that to make a difference, you have to become the difference and not just be a small wave of change. You have to be a tidal wave and flood the world with this change.” 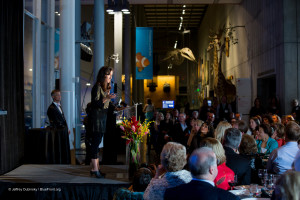 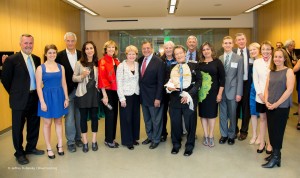 The following day hundreds more change seekers showed up for the Peter Benchley Bay to Sea Symposium sponsored by Blue Frontier, Wendy Benchley and the Aquarium of the Bay.  They heard outstanding talks and panels on the Bay and the Wonder and the Challenges of the Ocean from people such as including past and present award winners Jane Lubchenco, Geraldine Knatz, Steve Gaines and Steve Palumbi, as well as the Bay Institute’s Program Director Marc Holmes and myself.   I moderated a luncheon conversation between National Geographic Explorer in Residence Dr. Sylvia Earle and Scripps Institution of Oceanography Director Dr. Margaret Leinen.  They both addressed glo 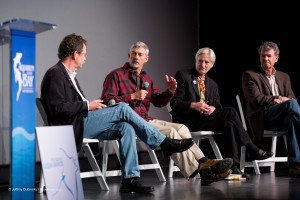 bal issues like overfishing and climate change and the belief that it is not too late to enact solutions that can turn the tide in favor of our living seas.   Sylvia even led a meditation on the sea.

If that wasn’t enough to provide hope, you could leave the aquarium and walk down the pier to see dozens of sea lions noisily hauled out on the docks along the city’s waterfront where one of the world’s great marine wildlife recoveries is taking place.  This includes the return of harbor porpoises to the bay for the first time in 60 years and the huge numbers of whales, dolphins, salmon and seabirds thriving just beyond the Golden Gate and up and down California’s coast.

If the world’s eighth largest economy (California) can prosper while protecting and restoring its coast and ocean, there’s no reason commonsense solutions can’t be scaled up to a national and global level.  That’s what Peter Benchley Ocean Award winners are working towards every day. Blue Frontier, Wendy Benchley and this year’s more than 20 sponsors including Google, The Campbell Foundation and the Moore Foundation are proud to honor them.

Wednesday will mark another effort to drive solutions.  Sponsored by Blue Frontier, Oceana, Ocean Champions, NRDC, Clean Ocean Action and the Colorado Ocean Coalition and supported by dozens of other groups, Over The Horizon’s all day D.C. gathering with teleconferencing from across the country will address key challenges we face if we’re to expand our public visibility between now and 2016

The agenda will include briefing

s from ocean policy leaders including Sylvia Earle, reporting back from Secretary of State John Kerry’s ocean conference that will have just ended.  We will then seek to develop a set of 2-4 key issues the blue movement can agree to take to the public and policymakers between now and 2016.  Other sessions will focus on bringing these issues into focus during the 2014 campaign season and onto Capitol Hill during the 2015 Blue Vision Summit so that ocean issues get acted on locally, regionally and nationally by 2016.  For the full agenda click here.

If you would like to participate live or by teleconference on Wednesday contact Jud@bluefront.org for sign-on information

Finally, if you enjoy Blue Notes and support the ongoing work of Blue Frontier please consider making a tax-deductible contribution to us HERE.  Help us restore the blue in our red, white and blue.
Top