In this issue
The Keystone Pipeline for the Sea!
Our Spring Offensive
Mission Blue
Props to Senator Brian Schatz
If is can happen in Toledo
Seaweed Spotlight

The Keystone Pipeline for the Sea!

“Get Oil Out” was the battle cry against offshore oil drilling after the 1969 Santa Barbara Oil Spill that also helped launch the modern environmental movement.  Years of citizen lobbying led to a congressional moratorium on drilling off most of the U.S. that lasted 26 years, but came to an end during the Bush Administration.  Now the Obama administration wants to open up much of the Eastern Seaboard, parts of the Gulf of Mexico and the Arctic Ocean to new drilling.  This is a poorly thought out decision.  It is in conflict with his National Ocean Policy and Climate Action Policy.  This could be the Keystone XL pipeline of the ocean, in that it threatens both massive pollution and climate disaster.

The ocean community will have to mobilize popular opposition to stop it.  Putting an end to 118 years of offshore drilling needs to become a public priority before the Department of Interior’s “Five Year Plan” for 2017-2022 lease sales starts up.  The best available science has already indicated that in order to avoid catastrophic impacts from climate change (as opposed to the bad ones we’re already experiencing) we have to choose not to tap 80 percent of all the known reserves of oil in the ground, never mind looking for new oil in places like the Arctic Ocean off Alaska.  Fossil fuels already burned have melted much of the ice that has kept that ocean frozen during the relatively tranquil climate regime of the past 10,000 years.

In 2000 I visited two BP Deepwater Rigs in the Gulf of Mexico.  On the second I asked the “Company Man” (rig boss) what would happen if they had an oil spill 1-2 miles down.  “I don’t know.  Guess we’ll find out when it happens,” he replied.  Ten years later we found out.  The 2010 BP blowout disaster continues to impact the Gulf of Mexico today.  I was flying 2,000 feet above the Gulf that June.  There were oil slicks out to the horizon, columns of black smoke where some of it was being burned off the surface and over 100 dolphins and a humpback whale trapped and dying in the sludge.

I’d already witnessed boats, birds and other wildlife slimed in the marina next to my home in Richmond California during the Cosco Busan bunker oil spill in SF Bay in 2007.  Then, right afterwards, I went off to report from aboard Coast Guard Cutters protecting Iraq’s offshore oil terminals in the Northern Persian Gulf: a lifeless sea smelling of hydrocarbons and bristling with weaponry.  After Chevron spent millions of dollars, this July the Richmond City Council approved a billion dollar “modernization” for the company’s century-old-refinery that will let it burn higher-sulfur oil from places like Iraq (see my San Francisco Chronicle commentary). http://bit.ly/1oUD6Dr

So to review: we have wars for oil:  Whenever there’s a spill we lose wildlife and jobs in fishing and tourism: Childhood asthma and adult cancer rates at least double in low-income refinery neighborhoods from Richmond to Houston to the lower Mississippi: And now science tells us there’s a product liability issue as well – petroleum, used as directed, overheats our planet.

Last year Blue Frontier and more than 20 other blue groups including Waterkeeper Alliance, Greenpeace and the Gulf Restoration Network signed a pledge not to take any money from oil companies.  Now we have to step up our commitment, to:

1. Not let oil companies do any new drilling on our public seas

2. Begin to replace their present 18 percent of domestic oil production with clean green energy both on and offshore.

‘Get Oil Out!’ must again become an American battle cry from sea to shining sea.  Already large numbers of citizens have begun protesting seismic oil drilling surveys (that generate their own noise pollution) from New Jersey to North Carolina.  Activist groups including Oceana, Clean Ocean Action and the Alaska Wilderness League have been particularly outspoken as protests and popular mobilization seem likely to spread to Virginia, South Carolina, Florida and beyond.

In the Gulf of Mexico where Big Oil rules Texas and Louisiana constant small spills and leaks are part of the Oil Patch lifestyle.  Here the companies have figured out how to save money on their tapped out rigs by abrogating the legal requirements to dismantle them.  Instead they proselytize the benefits of converting “Rigs to Reefs.”

But a just published book ‘Bring Back the Gulf’ from oil and coral experts Richard Charter and DeeVon Quirolo makes a cogent case that with 5 percent of the habitat in the Gulf of Mexico now comprised of oil rigs, the Rigs-to-Reefs program of the Department of the Interior may not actually benefit the marine environment in the same way it benefits the oil companies bottom lines.  For a free download of the book go to: www.bringbackthegulf.org

Blue Frontier will also be convening a meeting on offshore oil drilling opposition between now and 2016.  This strategy meeting will take place November 3rd during Restore America’s Estuaries & Coastal America’s National Summit at the Gaylord Convention Center just outside Washington D.C.  Hopefully this will be an opportunity to expand on our climate and pollution message:  “No Offshore Drilling or Fracking.  Get Oil Out!”

We hope you’re all saving the date and planning to join Blue Frontier, Dr. Sylvia Earle, Ralph Nader, Prince Albert of Monaco, Rep. Sam Farr, Legal Sea Foods CEO Roger Berkowitz, the marine artist Wyland and hundreds of other ocean leaders and activists May 11-14, 2015 for the 5th Blue Vision Summit, Healthy Ocean Hill Day and 8th annual Peter Benchley Ocean Awards to expand our solution-oriented work for our public seas and take the right answers including – “Get Oil Out” – to our elected representatives.

Speaking of Sylvia Earle, the documentary about her life and the ocean, ‘Mission Blue’ became available on Netflix on August 15th.    To quote the ‘Hollywood Reporter’ (which I rarely do but in this case agree with): “It’s her natural charisma and infectious enthusiasm that are most compelling onscreen. As one of the first and foremost American women oceanographers, she became a standard-bearer among female field-research scientists, while also marrying and raising a family, long before the term “supermom” ever entered the lexicon.”

For the official trailer and more information go to: http://mission-blue.org/mission-blue-film/ 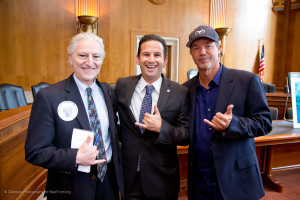 First term Senator Brian Schatz (who greeted us last May during our Hill Day with the story of how he became a seaweed rebel at age 16) won the Hawaii Democratic Primary by a razor-thin margin last week.  For those of you who know Hawaii that means it’s almost certain he’ll win a new term in office.  This is great news for those who love the ocean and want to see real action on climate change.  Along with Senator Sheldon Whitehouse of Rhode Island and Senator Ed Markey of Massachusetts, Schatz is quickly becoming a top Congressional leader on ocean protection and climate response.  Plus, with champions on both the Atlantic and in the Pacific we have greater ocean basin balance.

If it can happen in Toledo

The threat of harmful algal blooms (HABs) fed by industrial scale farm and urban runoff was in the news again when Toledo, Ohio’s half million residents were not able to drink their water.  Algae blooms tied to pollution are an issue for both fresh and saltwater coastal residents.  Here’s a good explanatory blog by Tom Henry an award winning journalist and Great Lakes Expert at the Toledo Blade newspaper. http://bit.ly/1xZgaYC

A regular feature of Blue Notes where we shine our light on a group from the Blue Movement Directory in order to create a more self-aware and collaborative movement. This month we feature Daniella Russo and Margo Pellegrino

Sometimes it is groups (we’ve profiled dozens to date) and sometimes it’s individuals who help turn the tide for our blue planet whether its J. Wallace Nichols spreading the word of his new ‘Blue Mind’ book and movement or a working couple in Florida, Dan and Stephanie Clark’s ‘Cry of the Water’ (cryofthewater.com) campaign to protect the most northerly of Florida’s endangered corals off Fort Lauderdale.

Two other innovative individuals I spoke with this week are Daniella Russo and Blue Frontier’s own paddle personality Margo Pellegrino.

ublic awareness of plastic pollution of the seas as Executive Director of the Plastic Pollution Coalition.  She recently used her extensive business background to cofound the new ‘Think Beyond Plastic (TBP)’ Business Accelerator in Silicon Valley.  It aims to help startup companies with sustainable alternatives to petroleum based plastic such as heat-resistant paper cups and a clay nano-particle substitute for plastic micro-beads in personal care products.  TBP will help find capital for these innovators and connect them with major corporations looking to transition to more environmentally friendly product lines.  “We don’t want this to be a way for them (some major corporations) to greenwash,” Daniella explained to me.  “We’ll bring business and entrepreneurs and innovators together and see who’s serious and who means it and who doesn’t.”  She believes that transitioning off plastic and to healthier lifestyles on a wide enough scale will require both using less plastic and bringing more viable alternatives to the marketplace.  Here’s a good story on the project from Business Week.

Margo Pellegrino’s last major coastal paddle was from Seattle to San Diego for Blue Frontier where she connected with seaweed activists and raised ocean issues all along the West Coast in 2010.  In 2015 she’ll begin her New York to New Orleans paddle up the Hudson, across the Great Lakes and down the Mississippi to connect river, watershed, coastal and ocean groups around our shared concerns over water quality and climate change.

On August 14 in collaboration with a number of New Jersey groups she started paddling the state from Trenton to Newark with a focus on Climate Change impacts on New Jersey: from slow recovery support provided to Hurricane Sandy impacted towns to proposed offshore seismic testing linked to potential oil drilling.   She will also look at the pollution threat from Combined Sewer Overflows that dump wastewater during storms and flooding.  She will be collecting water samples with testing kits donated by Blue Ocean Sciences of Santa Barbara California in order to track pollution hotspots.

“Clearly, New Jersey needs to address the reality of rising tides, sinking land, aging infrastructure, and dangerous run-off like at no other time in our history,” Margo says.  To track her journey go to:  Miami2Maine.com