BP and the Secretary of Interior

In early September I attended a conference of the Society of Environmental Journalists (SEJ) in New Orleans. On the opening night BP’s Vice President for Communications and former Pentagon spokesman Geoff Morrell, having helped us understand our successes in Iraq, told the gathered reporters how the media failed to cover the story of the great recovery and resiliency of the Gulf of Mexico since 2010, how BP’s clean-up efforts have left beaches, “in better shape than they’ve been in years.” With dead dolphins and tar balls still washing up along the coast, a BP spokesman talking about the resiliency of the Gulf struck me as about as appropriate as a Vatican spokesman talking about the resiliency of abused children. The following day a federal judge agreed, ruling BP “grossly negligent,” in the 2010 Deepwater Horizon disaster that killed 11 workers and created the worst oil spill and toxic brew of oil, fire and chemical dispersant ever recorded in U.S. waters.

I organized a panel titled ‘In Depth Stories of our Troubled Seas,’ on the third day of the conference. Three of our four pan

el participants were past Peter Benchley Ocean Award winners. They included marine ecologist and paleontologist Dr. Jeremy Jackson (see his new NY Times opinion piece – http://nyti.ms/1tnxCav), Louisiana Universities Marine Consortium director and Gulf dead zone guru Dr. Nancy Rabalais, Gulf Restoration Network executive director Cyn Sarthou and, a winner in many other ways, 5 Gyres Co-Founder and marine plastics researcher Marcus Eriksen. It was agreed the one resource not fully exploited in the ocean is good stories and many of the reporters attending the session found new leads there. Based on the best available science and a book he’s now working on Jeremy Jackson also sadly predicted that within a few decades the Cajun culture of coastal Louisiana will be gone along with the bayous that define it, victims of wetland loss and sea level rise from oil company operations and fossil-fuel fired climate change. According to leading climatologists and others at the conference South Florida and the Everglades are also slated to go the way of Louisiana’s bayous, coastal Bangladesh, parts of North Carolina and some small island nations in the Pacific, disappearing beneath the sea in coming decades.

One of the conference’s keynoters was Secretary of Interior Sally Jewell who spoke of the importance of addressing climate change. During the Q&A that followed I asked her how she reconciled a commitment to climate action with the Obama administration’s decision this summer to open up large parts of the Atlantic coast and Arctic ocean to acoustic surveys for oil and gas prior to offshore lease sales beginning in 2017 (see Blue Notes #126).  Part of her answer: “It’s important to know what we have… and I think anyone would suggest that reducing dependence on foreign oil is good… I think in the Atlantic seaboard, as we get good data, you’ll have different types of reactions from different states as we’ve had already. We have those that say we really want offshore oil and gas activity in our state and those that say we don’t want any of that. And those are all going to be taken into account by BOEM (the Bureau of Ocean Energy Management) when they do that 17 to 22 analysis (lease sales).” In response to an anti-drilling letter she received from the three West Coast Governors she said: “Governors Inslee, Kitzhaber and Brown, I believe will be consistent in saying we don’t want it here in the Pacific coast. That will make a very significant difference to the Bureau of Ocean Energy Management in where they decide to put their limited resources.  If the states don’t want it, it’s more likely you’ll concentrate where they do.” In other words the Obama administration’s “all of the above” approach to energy is based on politics rather than science-based policy.

The best available science has already indicated that in order to avoid catastrophic impacts from climate change – if global temperatures rise above 2 degrees Celsius as they are now expected to – we’d have to choose not to tap two-thirds of all the world’s known petroleum reserves and there’s no time in history when we’ve promoted the search for more oil and gas reserves – as these surveys would do – in order to leave them in place.

Of course California as a society has chosen to leave its offshore oil under the seabed, increase its energy efficiency and conservation and begun a needed transition to cleaner carbon-free energy including wind, solar and hydro. But California is the exception. Louisiana, as an oil colony, may be closer to the present status quo, which is to say, heading towards Hell (or at least a very warm planet) in a hand basket. Having visited before to cover Hurricane Katrina in 2005 and the BP Gulf oil blowout in 2010 I expect I might be returning to this disaster prone area in 2015 when Godzilla attacks.

A Monument Under Attack

Another monstrous attack is taking place in the Pacific, led by the Pacific Fisheries Management Council, one of eight federal fisheries councils that oversee fishing in federal waters of the U.S. Exclusive Economic Zone (EEZ). Because they’re exempted from the conflict of interest laws that apply to other regulatory bodies, the councils tend to be dominated by commercial and recreational fishing interests. The Pacific council goes above and beyond however being the one most consistently under investigation by legislators and law enforcement. That hasn’t stopped them from leading a campaign, with supportive coverage from Fox News, to get the Obama administration to roll back the president’s expansion of the Pacific Remote Islands Monument originally created by President Bush in his last days in office (see blue notes 125).  The waters of the south Pacific Monument, protected from drilling, fishing or dumping will be expanded from 50 to 200 nautical miles (the extent of the U.S. EEZ). This one act will create the largest marine wilderness park in the Pacific and increase global protection of the world’s ocean from 2 to 3 percent.

Earlier this month a 9-person delegation from the Fisheries Council was granted a 90-minute White House meeting with John Podesta, the White House climate and energy chief (and long time Democratic operative), also Mike Boots from CEQ and several others. They warned that the new protections would devastate the U.S. tuna fleet (that gets about 2 percent of its catch from these waters), give fishing and therefore strategic advantage to China’s fleet and encourage illegal fishing in the reserve if it wasn’t properly guarded. Interestingly these were the same arguments the council used when it campaigned against the establishment of Northwest Hawaii’s Papahānaumokuākea Marine National Monument established by President Bush in 2006, a pristine stretch of ocean that contains 70 percent of U.S. coral reefs, also monk seals, turtles and tiger sharks. Also interesting, in its online story Fox News went with a photo of John Podesta sitting next to Hillary Clinton at an energy summit. While she has nothing to do with the Monument Clinton is expected to run for President in 2016. I was just impressed Fox showed enough restraint not to link the Remote Islands to Benghazi.

Six Coast Guards and 1/3 of the World 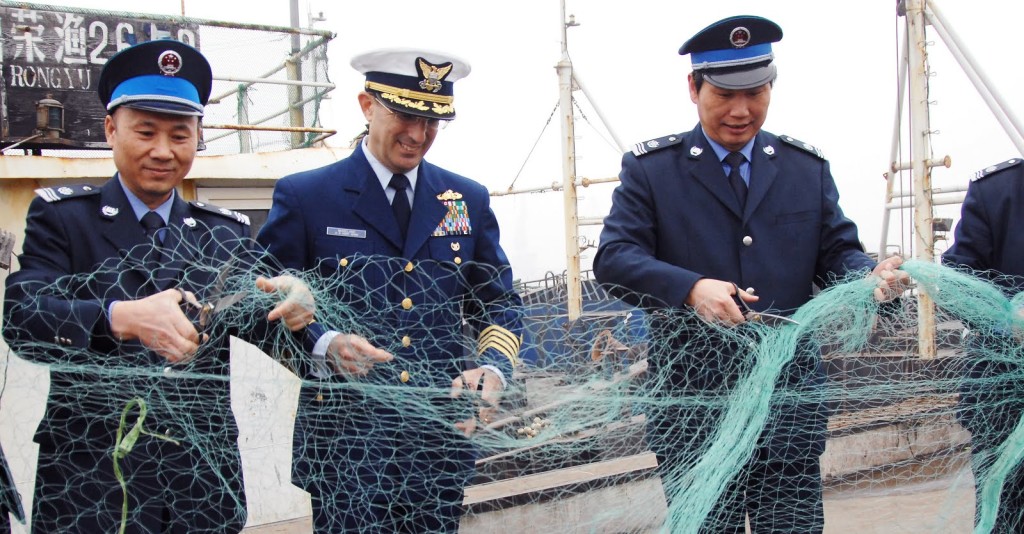 On Thursday September 18 I was honored to give a luncheon speech to some 80 representatives from the North Pacific Coast Guard Forum, hosted this year by the U.S. Coast Guard in San Francisco.   Initiated by the Japanese Coast Guard in 2000 and now including the services of Japan, Canada, the United States, Russia, China and Korea the Forum aims to improve multilateral cooperation on an ocean that covers one third of the globe. They are working to pool resources in the fight against illegal trafficking in drugs, migrants, maritime security issues and in response to various natural (and not so natural) disasters across the Pacific. Since 2005 they’ve also held combined operations targeting pirate driftnet and other illegal fishing on the high seas with the understanding that illegal fishing, including miles long nylon driftnet “walls of death,” (banned by the UN for over 20 years) pose a grave threat to global food security.

In my talk I pointed out the links between their missions and the cascading environmental crisis in our seas from overfishing, pollution, coastal sprawl and climate change. I also made the argument that their work may be more important than that of traditional navies in the 21st century. Here’s why:

For thousands of years warfare has been the main rite of passage by which young men proved themselves as warriors and heroes and, if they survived, went on to become the leaders of their clans, tribes and nations. Today, given the social and economic interdependence of an increasingly crowded planet, and faced wi

th growing impacts from disasters including extreme weather events, droughts, terror, piracy, industrial poisoning, migrant surges and pandemics we may be seeing the emergence on an alternative path.

In the future our warriors, heroes, and leaders may more often arise from the ranks of young women and men willing to go in harm’s way to confront a wide but unknowable range of threats in dangerous situations on a planet that’s two thirds salt-water. And that to me sounds very much like the definition of a coast guard service.

Obviously they didn’t mind hearing this and afterwards lots of Pacific spanning business cards were exchanged before they got on their buses for a trip down to Google to learn about the Google Ocean Program.

Climate is a Blue Issue

On Sunday Sept. 21 hundreds of thousands of people marched in NYC and across the planet to call for action to address Climate Change.  We hope you’ll join us this spring in D.C. to promote alternatives to offshore fossil-fuel drilling, overfishing, pollution and other threats to our blue planet.

Because we know the expenses involved in flying to DC and finding accommodations during 4 days of meetings, awards, celebrations and educations (of your elected officials) we’ve always sought to keep the registration fee for the biennial Blue Vision Summits inexpensive by having larger sponsoring groups help subsidize smaller seaweed groups so that the registration charges are actually below the cost per person of putting on the Summit. The registration for the 5th Blue Vision Summit May 11-14, 2015 will be $200. However, we’re also offering an early calendar year half-price registration for only $100. This offer is good till Dec. 31 2014. Register HERE. Also, if you’re planning on coming to the Summit this spring but worried about your budget, check out Chris Palmer’s inspiring suggestions on how to fundraise your way to DC for BVS5. LINK.

Nominations for the 2015 Benchley awards are now open. CLICK HERE to cast your nomination. 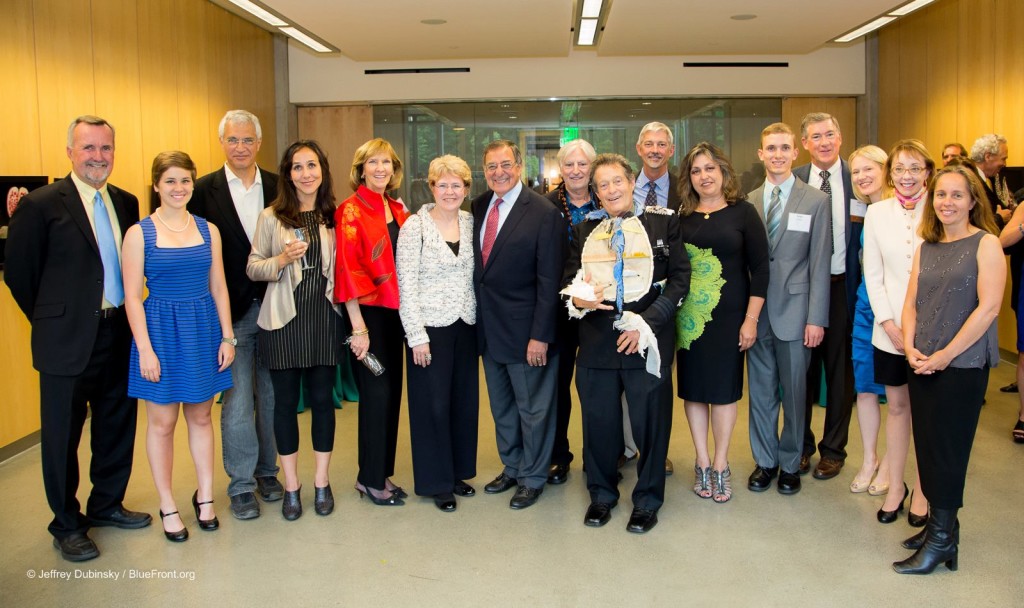