In this issue
Will This Election Be Good For Fish?

Big Oil is Stalking Me

The Lighter Side of the Apocalypse

Will This Election be Good for Fish?

In May, the 5th Healthy Ocean Hill Day will see delegations of seaweed citizens marching on the House and Senate to remind our elected representatives that the ocean, coasts and communities that depend on them matter, and that doing nothing (as Congress presently does) is not acceptable. But who we’ll be talking to will largely be determined this. November 4 in an election that could change the makeup of the Senate, and impact decision-making on the health of our public seas from bay and coastal towns like Richmond California where I live, to the White House and beyond.

In the senate, some candidates like democrat Mark Begich of Alaska are big on oil development in the Arctic, which might not be appealing to many ocean advocates. However, as the head of the Senate Oceans subcommittee he’s also been a champion of sustainable fisheries. He’s gone after pirate fishing on the high seas and championed the Magnuson-Stevens Act reforms of 2006, which help protect U.S. waters from overfishing. However this reform (unsurprisingly) is now under attack in Congress, just as commercially fished marine wildlife species are beginning to recover off our shores. 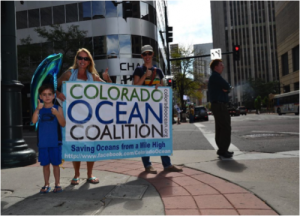 environmental issues, though his support of natural gas fracking in his home state has hurt him with some voters. He is facing a tight election race in which some unusual players including the Colorado Ocean Coalition (COCO) are working to keep their (our) issues visible and vibrant during this campaign season. After all, as COCO founder Vicki Nichols Goldstein has noted, when it comes to the air we breath and the rains that nurture us every state is a coastal state.

On the House side little is expected to change thanks to gerrymandering and political polarization, even though polls indicate the House’s single digit approval ratings make it only slightly more popular than ISIS and Ebola.

There are of course some great members like ocean champions Sam Farr and Congresswoman Chellie Pingree of Maine who is running for a third term. She was among the “ocean champions” who greeted our 2013 Ocean Hill Day folk along with Senator Brian Schatz of Hawaii (see Blue Notes #126), Rep. Jarred Huffman of California and others. “You can’t separate the ecology of our oceans and the economy of our coastal communities,” Rep. Pingree says knowing of what she speaks. She lives on an island 10 miles off the coast of Maine in Penobscot Bay and has the strong endorsement of the Ocean Champions organization which bills itself as “the only political voice for the oceans” and has a Political Action Committee to support friends and oppose enemies of marine conservation.

In 2006 Ocean Champions targeted and helped defeat Richard Pombo, a California Republican who dropped the word ‘Natural’ from the House Natural Resource Committee when he took it over as Chair. He was a major proponent of offshore and arctic drilling, selling off National Parks and gutting the Endangered Species Act. For more on the “Wise Use” environmental backlash he was a self-proclaimed member of, read my first book, ‘The War Against the Greens’

This fall Ocean Champions is working on a number of House and Senate races from California to New Hampshire. 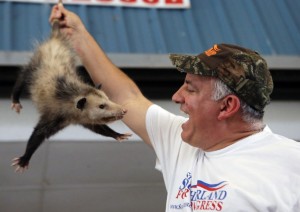 Steve Southerland is being challenged by moderate Democrat Gwen Graham, daughter of long-time Florida Senator Bob Graham, in a tight race that has gained national attention. Like Richard Pombo in his day, Ocean Champions has labeled Southerland, “Ocean Enemy #1,” because of his efforts to promote offshore oil drilling and block key provisions of the Clean Water Act, President Obama’s establishment of marine monuments and Gulf of Mexico Fishery Management Council decisions among other things. He thought he was pandering to local fishermen but actually just pissed them off with some uninformed meddling (see this Ocean Champions ad starring local Fisherman Billy Archer – http://bit.ly/YeVAc9

“We as a community are doing more than ever in this election to make sure we come back from it with a pro-ocean congress,” says Ocean Champions’ Executive Director Dave Wilmot. “We’re doing our best to influence it. I feel like our (ocean conservation) community has really stepped up this year.”

Big Oil is Stalking Me

Unfortunately, like every other community and movment for change, we no longer just have to confront greed, ignorance and malfeasance among certain of those we elect, we now also face the insidious impacts of the Supreme Court’s Citizens United decision of 2010. That’s the one that allows unlimited corporate campaign spending based on the idea that corporations are people and money is free speech. Meanwhile, my California town has become ground zero for corporate spending at the municipal level.

Chevron has one of the nation’s largest and oldest petroleum refineries (built by Standard Oil in 1902) in Richmond, my Bay Area city of just over 100,000.  Two years ago, a major fire at the refinery sent some 15,000 locals to hospitals. Chevron later pleaded no-contest to six misdemeanor criminal charges and paid a $2 million fine. No one went to jail.

Until 2008, when a group of candidates calling themselves the Progressive Alliance won seats on Richmond’s City Council, it was dominated by a refinery-friendly majority known as the ‘Chevron Five.’  Now the oil giant wants to turn Richmond back into a company town where elected officials won’t force it to pay its fair share of property taxes, or demand transparent environmental impact reports, or challenge it on pollution and local hiring practices. In recent negotiations for a billion-dollar refinery modernization that will allow Chevron to burn high-sulfur oil from countries like Iraq, the company offered $30 million in community “investments” to assuage residents who fear the health and environmental effects, although it ended up having to commit to $90 million under pressure from city council members. That may be pocket change for a company with $220 billion in revenues, but Chevron still took notice.

Elections filings show this oil company has spent over $5 million on Richmond municipal elections since 2010. The 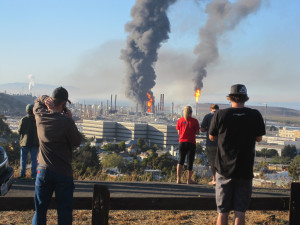 company’s Moving Forward political action committee describes itself as a coalition of labor unions, small businesses, public safety and firefighter associations, but Chevron has funded 99.7% of it – $3million so far this year alone. That’s about $75 a head to get into the heads of me and every other registered voter in town, also about 12 times what all the candidates for office– including the 4 they’re backing – have spent.

About half of the slick mailers deluging my mailbox attack the 3 ‘Team Richmond’ progressive candidates (they’re anarchists! they’re jet setters!); the other half sings the praises of the company’s chosen ones.  Almost all the mailers say “major funding by Chevron” in tiny type, and that’s not counting all the towns billboards and TV ads on Comcast (even when I’m watching The Colbert Report), the campaign calls and telephone polls with loaded questions, or what pops up online.

Whenever I click on an online news site, say a local columnist’s story titled  “Chevron pouring money into Richmond elections,” an online ad also appears encouraging me to subscribe to the Richmond Standard.  While it touts itself as a free “community driven news” site, the Richmond Standard is a Chevron site, named in honor of Standard Oil. One of its recent “news” items trashed the appearance and behavior of Richmond residents who participated in last month’s national climate protests (see Blue Notes #127).

Chevron’s spokeswoman told me the company wouldn’t talk about how much it was spending, but it will continue to support candidates it feels are best for the city. Richmond’s termed-out mayor, Gail McLauglin, a member of the Green Party now running for a council seat, says, “If they spend millions … they’ll make it back thousands of times over if they can get the city council in the palm of their hands.”

What’s happening in Richmond makes me worry about the fate of our democracy and a city’s ability to deal with issues like climate change, coastal protection and pollution in its own backyard. It gives off a distinct odor of corruption.

On October 16 Progressive Senator Bernie Sanders of Vermont visited and told 600 Team Richmond supporters gathered at our civic center, “If you stand up to Chevron and all their money, you’ll give hope to people all over this country.”  As Lincoln said “You cannot fool all the people all the time.”  The good news is they haven’t fooled us yet.

The Lighter Side of the Apocalypse

Sherman’s Lagoon cartoonist and Blue Frontier board member Jim Toomey has often used wit and skill to spread environmental messages and lighten grim news about our ocean planet. In a recent series of his widely syndicated comic strip he educates his readers on the threat of Ocean Acidification while also making them laugh, not an easy task even for a bunch of talking fish. To see the strips that run Oct. 9 to Oct. 25, go to www.shermanslagoon.com and click on the calendar below the cartoon strip. Set it to Oct. 9 and then keep hitting ‘next’ to read the full series.

To learn more about OA (the fact you use the acronym shows you’re hip to the threat) read this article on the latest GAO report faulting the Federal government’s failure to take a coordinated approach in addressing Ocean Acidification – http://www.commondreams.org/newswire/2014/10/14/federal-watchdog-faults-government-failure-address-ocean-acidification

“Power concedes nothing without a demand. It never did and it never will.” – Frederick Douglas.

Like the abolitionists, environmentalists and others who’ve helped expand our nation’s freedoms the ocean community will be demanding lots of common sense solutions to protect and restore our last great frontier this spring during the 5th Blue Vision Summit. We’ll be joined by many friends such as Dr. Sylvia Earle, Coast Guard Commandant Admiral Paul Zukunft, Ralph Nader, Rep. Sam Farr and the artist Wyland. When we go up on Capitol Hill to educate our lawmakers we’ll greet more of our true blue friends such as Senators Whitehouse, Markey and Schatz and again be inspired meeting with and celebrating the 8th annual Peter Benchley Ocean Awards the following evening including 2015 winner for National Stewardship Prince Albert II of Monaco.

Registration for the 5th Blue Vision Summit May 11-14, 2015 will be a cost-saving $200. However, we’re offering an early year half-price registration for only $100. This offer is good till Dec. 31 2014. Register HERE. Also, if you’re planning on coming to the Summit this spring but worried about your budget (who isn’t), check out Chris Palmer’s inspiring suggestions on how to fundraise your way to DC for BVS5. LINK.

And don’t forget to honor your own living heroes and mentors. Nominations for all 2015 Benchley awards categories other than national stewardship remain open. CLICK HERE to cast your nomination. 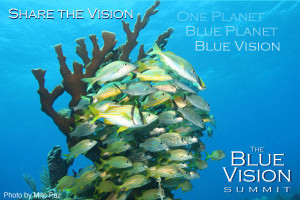 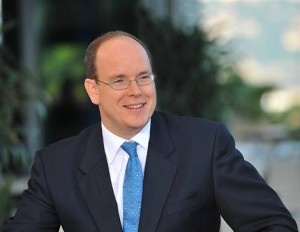