Time For a Sea Party?
Offshore Drilling – “Secret from the Start”
Offshore Opposition – Open to all
Props for giving us hope
Plan your DC trip to Blue Vision Summit – May 11-14, 2015

Time For a Sea Party?

of State for Oceans Judy Garber.  Looking at the state of local, national and global politics 3 days after the 2014 elections it was agreed that ocean health remains an area that generates unique coalitions and non-partisan engagement, though it helps to have strong advocates such as Rep. Castor, who was a major critic of BP during their 2010 oil blowout and is a fierce defender of her constituents’ beaches and offshore waters.  Ocean Champions, even in an election that saw pro-oil drilling republicans take back the Senate, managed to see 54 of 59 “ocean champions” it endorsed elected.  While some were incumbents not at great risk of losing their seats, other winners like Senator Jeanne Shaheen of New Hampshire, could prove vital allies in the fight for marine protection.  One race was particularly sweet for Ocean Champions, which fought hard to defeat “Ocean Enemy #1” Rep. Steve Southerland (see Blue Notes #128).  He would prove to be one of only two incumbent republican House members defeated this year (by democrat Gwen Graham).

As for the State Department, under John Kerry the U.S. has now emerged as a champion in the fight against illegal pirate fishing, for marine protected areas (with Kerry’s encouragement President Obama expanded three marine monuments in the Pacific by hundreds of thousands of square miles) and for addressing environmental concerns at both poles, even as Kerry prepares to take the chairmanship of the 8-nation Arctic Council.  Of course, in a case of one fin not knowing where the other fin is flapping, the Obama administration is also opening the eastern seaboard and Arctic to acoustic surveys for oil drilling.  The last time anything on this scale was attempted (under the Reagan administration back in the 1980s) broad based public opposition not only stopped new drilling but led to the creation of some of the nation’s largest and most popular marine sanctuaries off California and Florida.  The first President Bush supported creation of the Monterey Sanctuary in California in the hope it might help him win the state in the 1992 election.  Presidential election years are actually a great opportunity for environmental organizing.

While the Tea Party has proven a powerfully divisive force in U.S. politics, a Sea Party of ocean activists, businesses and communities committed to bringing the health of our public seas into public life and politics could prove a constructive and viable force by 2016.  It could become active in coastal primary states like New Hampshire, New Jersey and Florida, threatened by offshore oil development, pollution, catastrophic storms and sea level rise.  In some areas sea party activists are already sharpening their tridents.  Expect to see costumed fish, jellyfish, polar bears with picket signs, militant mermaids and oiled surfers (don’t worry, it’s really chocolate syrup) at public forums and raising questions at town hall meetings for the candidates, and yes, in inland primary states like Iowa and Colorado – because every state is a coastal state.  Did I also mention North Carolina? 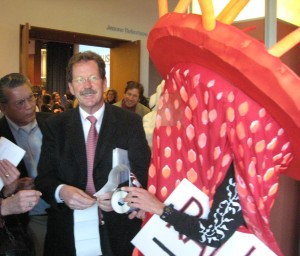 Offshore Drilling – “Secret from the Start”

to open the east coast for the first time ever to offshore oil drilling (despite President Obama’s new agreement with China to begin limiting Greenhouse gas emissions from coal and oil).  On November 6 North Carolina Governor Pat McCrory held a closed door meeting with representatives from the federal Bureau of Ocean Energy Management (BOEM) and representatives from the South Carolina and Virginia Governors’ offices that also favor seismic testing for oil off their coasts.  Although the meeting was closed to the public and reporters, at least three groups linked to the oil industry gave presentations. Environmental groups protested the lack of public access, including Ocean Defense, who launched a social media campaign with pictures of people wearing gags reading ‘Big Oil.’

Offshore Opposition – Open to all

Three days before the North Carolina Governor’s meeting, Blue Frontier and the Ocean Foundation’s Richard Charter convened a daylong gathering of several dozen coastal activists from up and down the east coast who were opposed to the seismic testing that could kill tens of thousands of marine mammals, as well as lead to new drilling.   Out of this meeting came some common sense strategies that we’re not keeping behind closed doors.

We believe the way we’ll defeat plans for new offshore drilling and the politicians who support it will be to work with local community leaders and leverage that local opposition to coast wide actions.  We’ll bring different allies to the table and focus on local elected officials and resolutions at the town and coastal county level.  We’ll build coalitions with beach residents, businesses, fishermen and recreational ocean users.  We’ll highlight offshore oil’s potential conflicts with military training areas and other ocean users.  We’ll highlight how offshore oil companies have also been secretly carrying out offshore fracking and dumping the toxic wastewater byproduct, only admitting they’re doing it after getting caught.  We’ll promote well-situated ocean wind and clean energy projects as a smart, job-generating alternative to oil –

after all, no wind spill ever destroyed a bayou or a beachfront community.  We’ll encourage citizen nomination and creation of new national marine sanctuaries that exclude drilling in ecologically and historically significant areas.  The 5th anniversary of the BP oil blowout disaster in the Gulf (for which a federal judge found BP “grossly negligent”) will provide a teaching moment –8 months long unfortunately – to remind people of the huge risks we’d be placing our coastal economies, people and critters in if we open our east coast and Arctic ocean frontier to offshore drilling.

Props for Giving Us Hope

In the lead up to the election I wrote, “If the Supreme Court is right that Corporations are People and money is free speech, then Chevron is the biggest loud mouth in my town of Richmond.”  It turns out no one likes a loudmouth.

Having spent $3 million on a vicious campaign (see Blue Notes #128) to oust our city’s progressive council majority, Chevron lost big on Nov. 4.  After spending more than $250 on me and every other active voter in the city, the 4 candidates this oil company backed all lost and the 5 candidates supported by the progressive ‘Team Richmond’ all won. The city lawsuit against Chevron’s Richmond refinery that caught fire two years ago will continue, and lessons will be learned.  One of them is that when elections pit Corporations against informed citizens, Cindy Lauper is proven wrong.  Money doesn’t change everything.  Sometimes decency and democracy win out.

In a squeaker of an election that won’t be officially called till early December, Serge Dedina, founder of the marine environmental group WildCoast and a longtime surfer and waterman holds a steady 42 vote lead, out of more than 4,200 cast, for Mayor of the small San Diego border and beach town of Imperial Beach.  Living where California becomes Baja, California, Serge is an outstanding example of a seaweed rebel who took on city hall and will now have to run it.

This year RAE held their 6-day annual Summit in partnership with The Coastal Society.  Over 1,200 people came to D.C. to learn and present on a range of action projects, from massive post-BP and Hurricane Sandy ecosystem restoration efforts, to emerging Blue Carbon offsets to protect mangroves and sea grasses.  I got to talk about Citizens for a Sustainable Point Molate’s restoration efforts in Richmond as part of a panel on citizen engagement with Stefanie Sekich-Quinn of Surfrider, Dan Burger of the South Carolina Department of Health and Environmental Control and other folks involved in practical ways of restoring our coasts and waters, be they salty, brackish or fresh.

This week long carnival of ocean movies and conservation heroes – recently relocated from Monterey to St. Pete – may look and feel like an international film fest, especially as it prepares to shift over to Monaco for the 2015 season.  But at its heart, it’s a family run operation inspired by former documentary producers Deb Kinder and her husband Chuck, along with their daughters, Ashley and Sarah.  Though I missed the ‘Island President’ film I got to meet the President of the Maldives, Mohamed Nasheed (overthrown in a Coup), Australia’s ‘Shark Girl’ Madison Stewart (the film on her won the festival’s top honor) and hear from renowned ocean explorers including Bob Ballard (who brought along his ship EV Nautilus), Fabien and Celine Cousteau and Don Walsh.  Did I mention Academy Award winning actor Jeremy Irons talking about his movie ‘Trashed’ (no, it’s not about a night of overindulgence – but a whole culture of one)?

For mainstreaming our ocean message with her new award as one of Glamour magazine’s ‘2014 Women of the Year.’

U.S. Senate these three outfits have teamed up to create a high-tech weapon in the fight against overfishing: a satellite based global surveillance system that can identify and track large fishing vessels of over 300 tons.  These vessels are required to carry AIS (Automatic Identification System) transponders onboard, which enable this new ‘Global Fishing Watch’ to keep an eye in the sky on the ships and make their actions transparent.  The next step is to require tracking beacons on thousands of smaller fishing vessels, many of which are also involved in Illegal, Unreported and Unregulated pirate fishing. For details see: http://www.globalfishingwatch.org/ 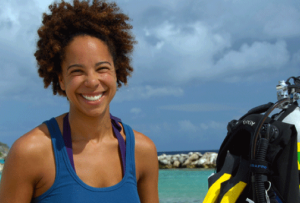 Don’t forget half price registrations for only $100 are available till Dec. 31 PURCHASE HERE.  Also put in your nomination(s) for a 2015 Peter Benchley Ocean Award HERE

And don’t forget we don’t live on dissolved oxygen and plankton.  To make a contribution to Blue Frontier so we can continue our work from sea to shining sea, please donate HERE.