From Bristol Bay to Havana Harbor 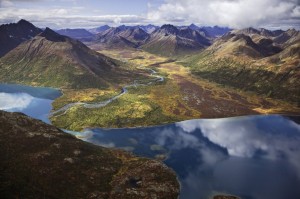 “In Alaska fish are the one thing that can trump oil,” offshore oil activist Richard Charter stated rather succinctly in describing President Obama’s decision on Tuesday December 16 to prevent oil and gas drilling in Bristol Bay, the 52,000 square mile coastal zone off southwest Alaska that’s also the world’s biggest sockeye salmon fishery worth some $2 billion a year. The decision was seen as a significant victory for Alaskan fishermen, Native Alaskans and environmentalists following a 30 year struggle that proved herculean even by Alaskan battle standards (and Alaska, just to remind one of its scale, contains one third of all U.S. coastline). The White House decision will protect, “one of America’s greatest natural resources and a massive economic engine, not only for Alaska but for America,” Obama stated and promised to “make sure that it is preserved into the future.”

The area was first opened up for oil leasing in 1986 under the Reagan administration. Following the 1989 Exxon Valdez oil spill in Alaska’s Prince William Sound, Congress established a nationwide moratorium on any new offshore drilling and the feds paid $95 million to buy back the Bristol Bay leases from the oil companies. In 2008 under the George W. Bush administration the drilling moratorium was allowed to expire.

Still not decided by the White House is whether to allow the copper and gold “Pebble Mine,” that woul 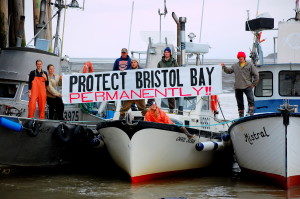 d be the largest open-pit mine in North America that’s been proposed for the Bristol Bay watershed. Arguably it makes little sense for the administration to protect the Bay’s offshore waters from oil pollution and then turn around and put the sockeye’s upstream spawning rivers at risk from massive mine runoff pollution. This is what an EPA report has already indicated would happen if the mine is permitted. So one victory seems to suggest a second might be in the offing.

My only question is if Bristol Bay is worth protecting from the risks of offshore oil development why not the Outer Banks of North Carolina?  The Outer Banks also have biologically diverse waters and bays, a unique maritime history and a multi-billion dollar a year ocean dependent industry in recreation and tourism. Still, the Outer Banks are part of the Atlantic Seaboard federal waters that the Obama Administration has opened up for seismic oil surveying leading to possible offshore oil leasing in 2017. The seaweed rebels of the Sea Party Coalition (see BN #129) are now working at the grassroots, regional and national level to assure this never happens.

We’ve also come a long way since the CIA conspired to put poison in Fidel Castro’s wetsuit or have a Navy dolphin plant an exploding conch shell near where Castro was known to scuba dive. Of cours 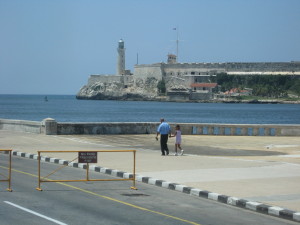 e President Obama’s announced normalization of U.S. relations with Cuba on December 17, aside from meaning my next trip will probably be legal, is bound to increase cooperation around economic, political and environmental issues between the U.S. and the island nation of 11 million, home to the greatest natural biodiversity in the Caribbean. The expected rush of hotel, tourism and other development could pose a threat to Cuba’s extraordinary system of coastal and marine reserves including turtle breeding beaches and coral reefs inside and outside the world famous 850 square mile ‘Jardines De La Reina (Gardens of the Queen) marine National Park off the island’s south coast.

Luckily several U.S. based environmental groups have already established good working relationships with colleagues and oceanographic and marine institutes in Cuba that are committed to ocean conservation and research. Among them are the Cuba Marine Research and Conservation Program (CMRC) at The Ocean Foundation, the Environmental Defense Fund’s Cuba program that includes working with the Cubans on creating reserves and incentives for local fishermen and Ocean Doctor David Guggenheim’s Cuba Conservancy Program that’s worked with Cuban marine scientists for over 14 years.

New York State’s December 17 decision to ban fracking as a health risk, following the release of a damning 184-page report from the state’s Department of Health, will change the world’s approach to this energy boom both on and offshore. In California the offshore oil industry has been fracking and dumping toxic fracking fluids into the ocean for years without informing state officials. This was only brought to light through the work of investigative journalists at the Associated Press who identified some 200 locations where this was taking place. 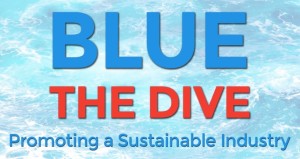 On November 21 over 100 divers and dive industry folk got together in a meeting room at the huge Dive Industry Manufacturers Association (DIMA), show in Las Vegas. They were there to talk about how ‘Blue The Dive’ aims at nothing less than transforming the dive industry into an engine of marine conservation stewardship. Aside from this long overdue initiative, I was pleased to see Blue The Dive T-shirts had adopted a Blue Frontier T slogan – ‘Blue is the new Green.’ This meeting certainly had the feel of a new social movement with lots of free ranging discussion and break-out sessions to brainstorm new approaches to reach out to more elements of an industry that, more than any other, depends on healthy reefs and ocean habitat to sell its products (recreational dive equipment and experiences).  Blue the Dive’s consensus statement, already signed by over 1,000 divers, half a dozen dive shops and an international scuba certification program aims to: “1. Improve dive industry sustainability and conservation practices. 2. Create a more informed and educated consumer to improve the way our communities interact with the ocean. 3. Improve dive industry manufacturing and supply chain sustainability business practices to reduce waste and increase efficiencies and profits. 4. Support scientific research and actions that protect our ocean resources.” It was great to see that the BTD launch leadership includes some close allies of Blue Frontier including the Colorado Ocean Coalition and Ocean First Divers of Boulder. For more on BTD go to bluethedive.org

California’s Gulf of the Farallones National Marine Sanctuary expansion is being finalized for April with its Environmental Impact Report having gone into the federal register on December 18 – one of the final steps that will soon see this ‘Galapagos of California’ about triple in size. The expansion, long advocated by former Congresswoman Lynn Woolsey and thousands of coastal residents, will protecting offshore waters from drilling and assure conservation and exploration opportunities from San Francisco’s Golden Gate to its offshore islands 27 miles out to Point Arena in Mendocino County 130 miles to the north. NOAA’s National Marine Sanctuary System has also reopened the process for citizen nominations of new U.S. sanctuaries. 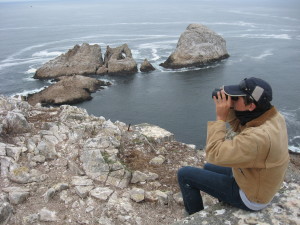 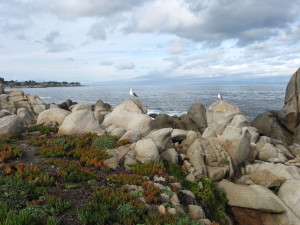 The 5th Blue Vision Summit May 11-14 in Washington DC will see hundreds of grassroots, regional and national ocean conservation leaders network and meet with policymakers, lead a ‘Healthy Ocean’ citizen lobby of Congress and celebrate solution-oriented heroes at the 8th annual Peter Benchley Ocean Awards. Along with addressing issues ranging from climate impacts on coastal communities to offshore oil to how a healthy ocean makes for a healthy economy this year’s BVS5 will provide strategic guidance for young ‘Sea Party’ activists who aim to make the state of our public seas a major public issue in primary states and beyond during the 2016 Presidential Elections. 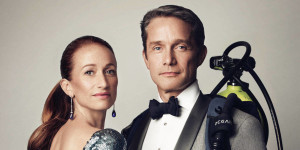 And a Poem for this Holiday Sea Sun

The Night Before Exxon

Twas the night before Christmas but for Santa T’was Hell.

The workshop was sinking, on the horizon was Shell

The noise from their rigs gave belugas a scare

While at the reindeer paddock lurked hungry polar bear 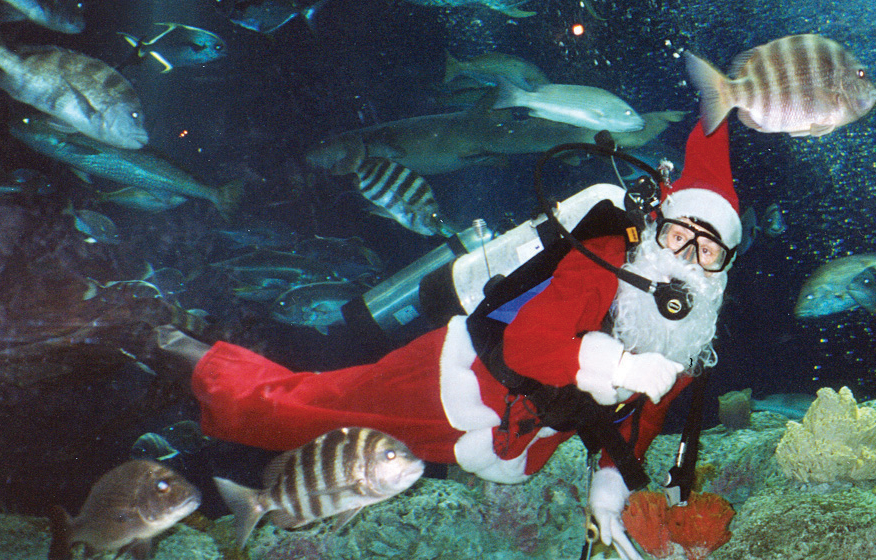 The clatter and stink from shipping lanes north of Russia

Meant less work for dogsleds and also their mushers

For now he could prospect for oil, coal and tin.

With denial of climate science by oil shills assured

The Grinch hoped to drown Santa’s elves and his herd

But others took loss of Arctic Sea Ice as warning

To end fossil fuel and begin a new dawning

For an age without waste be it tropic or polar

We must quit coal and oil and go wind/hydro/solar