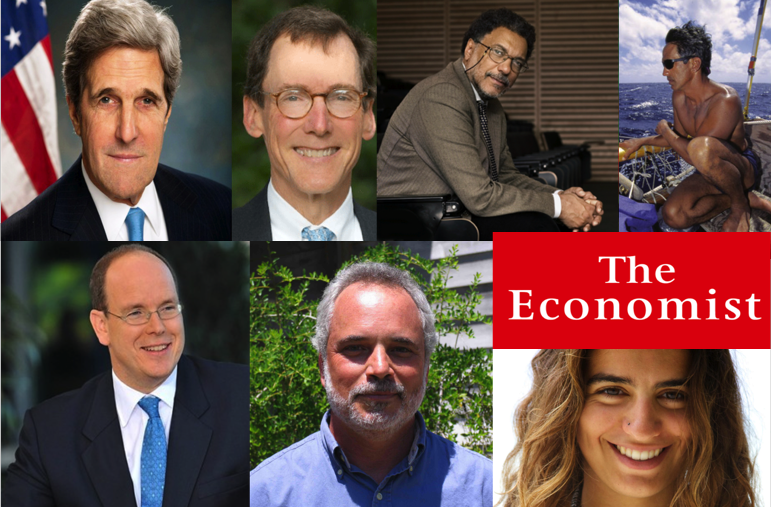 What do the U.S. Secretary of State, a European Prince, a French born scientist working in Canada and an Australian who’s been swimming with sharks since age 12 all have in common? They are all winners of the 8th annual Peter Benchley Ocean Awards.

Selected from an outstanding field of candidates nominated by the ocean conservation community the 2015 winners will receive their awards in Washington DC on Thursday May 14 (following the 5th Blue Vision Summit May 11-14). This year’s winners are:

In 2006 the Prince established the Prince Albert II of Monaco Foundation dedicated to protecting the environment that has since highlighted and supported a number of marine conservation efforts. In 2009 the Prince participated in a three-week scientific journey to Antarctica following several polar expeditions. Since then he has played a vital role in supporting scientific research, conferences and collaboration around the issue of ocean acidification and climate, advocated for protection of biodiversity on the high seas and promoted healthy ocean policies in a wide range of forums likely to influence change on a global scale.

Dr. Daniel Pauly is founder and leader of the ‘Sea Around Us’ Project at the University of British Columbia. Known for developing the concept of ‘Shifting Baselines’ and scientifically documenting and explaining ‘fishing down the food web,’ he has become a world leader in identifying overfishing as a threat to marine ecosystems and global food security. In addition he is an outspoken advocate for taking corrective action, his views widely respected by policymakers, the media and his fellow scientists.   His hundreds of peer-reviewed publications, several books and years of research based out of Germany, the Philippines and Canada mark him as an exceptional scientific resource for our living seas.

For Excellence in Policy – Secretary of State John Kerry

“Our oceans are in trouble…We have to summon global cooperation so that we can take the steps necessary to protect our oceans for generations to come,” says Secretary of State John Kerry. As a Senator John Kerry worked hard to restore the health of Boston Harbor and long promoted a healthy ocean and coastal environment. As Secretary of State he has taken extraordinary steps to realize these goals including advancing global efforts to end IUU pirate fishing, encouraging the President and other world leaders to expand marine wilderness parks including the U.S. Pacific Remote Islands whose protections were recently tripled in size to half a million square miles. He has convened the first of continuing ‘Our Ocean’ summits to seek additional solutions among global policymakers. As chair of the eight-nation Arctic Council he will also bring an appreciation of this fragile climate-impacted region to deliberations on its future.

For Excellence in Media – The Economist

The Economist has been an influential weekly news publication since 1843 with a contemporary circulation of some 1.5 million highly educated readers. In recent years it has dedicated a significant amount of its news coverage to the growing and varied crisis in the world ocean. Along with superior and consistent coverage of issues ranging from the Arctic to the deep seas to ports, shipping and fishing, it has also sponsored an annual ‘World Oceans Summit’ first launched in Singapore in 2012. This Summit bring together world leaders, policymakers, innovators, businesses, science and journalism to try and advance the cause of a sustainable ocean and global blue economy.

For Excellence in Exploration – Nainoa Thompson

Charles Nainoa Thompson is president of the Polynesian Voyaging Society and master of the traditional Pacific Island art of “wayfinding,” or non-instrument navigation. He was the first Native Hawaiian since the 14th century to practice long-distance wayfinding, and in 1976 inspired a revival of Hawaiian knowledge and culture with the launch and navigation of Hōkūleʻa, a traditional double-hulled voyaging canoe. For decades, Thompson has dedicated himself to teaching the skills and values of wayfinding to generations of navigators throughout Polynesia. Hōkūleʻa has now sailed over 145,000 nautical miles throughout the Pacific and is currently on a journey around the world to join and grow the movement for a more sustainable future.

Twenty-one-year-old Madison Stewart became an activist at the age of 8 passing out a petition in her school to get rid of shark killing nets near her home in Australia. Starting at age 12 she began diving with sharks, turning to home schooling at 14 so she could focus more of her time on diving and filming tiger sharks and other of these endangered predators on the Great Barrier Reef and elsewhere. Over the last seven year’s she’s campaigned against the shark meat and shark finning trade in Australia, Mexico, Fiji, Palau and other locales. Last year she became the subject of an award-winning Smithsonian documentary, “Shark Girl.”

She continues campaigning to defend sharks and their ocean habitat.

Tod Miller is a native North Carolinian raised in the town of Ocean on the Bogue Banks. In 1982 he founded the North Carolina Coastal Federation to promote coastal stewardship through education, advocacy and habitat preservation and restoration. Under his guidance the federation, with a staff of 22, has led campaigns that have reduced pollution and protected hundreds of thousands of acres of coastal habitat while restoring oyster reefs, salt marshes and other vital components of the North Carolina coast and economy.

Dana Beach is a South Carolina native who founded the South Carolina Coastal Conservation League in 1989. With his staff of 30 he works with communities, businesses and citizen groups to protect the state’s white sand beaches, salt marshes, swamps, pine savannahs and marine wildlife. Along with successfully fighting industrial hog farms, coal plants and other unsound development his group and its partners have protected over a million acres of South Carolina’s spectacular coastline.

UN Nor Lost at Sea 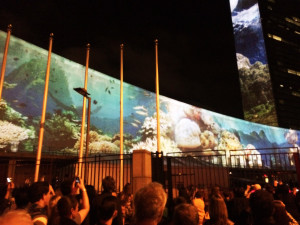 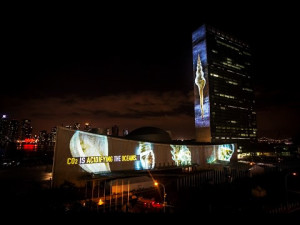 In late January a 4-day UN meeting agreed to begin negotiations for a treaty to protect biodiversity on the high seas.   Activists from the High Seas Alliance and other civil society groups played a significant role in, among other things, moving the U.S. delegation from an obstructionist position to a supportive one. Right now the open seas that cover 43 percent of the planet are little more than a wild west for the outlaws of industrial overfishing, pirate fishing, illegal dumping, drug-running and human trafficking. Unfortunately a treaty to protect its remaining life and diversity is not expected to be created or finalized until 2018. Even a 3-year delay is hard to fathom when our last great commons faces a cascading crisis of human-driven depredations and extinctions. Ultimately of course the ocean will endure. It’s what form it will endure in and if that form is supportive of human life that is unclear. The evolutionary experiment with large brained beach apes continues. 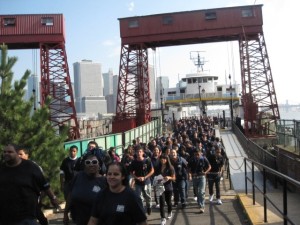 n recent weeks I got to join Benchley Award winner Dr. Daniel Pauly, Greenpeace Oceans Campaign Director John Hocevar and dozens of other blue experts (and two experts’ baby girl Avani) at the Planet of the Ocean conference in NYC sponsored by the Rosa Luxemburg Stiftung. A key focus of this two-day meeting was privatization of the seas. Panels questioned how to protect the ocean’s living resources from corporate interests that are rapidly liquidating its common property (like fish) while externalizing their costs in the form of pollution (like plastic).

While visiting the frozen slush of my natal town I also got to visit solution-oriented seaweed activists at the Metropolitan Waterfront Alliance, Waterkeeper Alliance, NRDC and the Harbor School on Governor’s Island. A city magnet school for 450 ferry-commuting high school students, I got to see their scuba, policy, oyster aquaculture and ocean engineering classes along with a big aquarium of stripped bass in the school entryway. As with past Blue Vision Summits, a delegation of 5 Harbor School students and 2 teacher-chaperons will be attending the next one in DC this spring.

Two days after cruising the snowy waters of New York I got to visit and speak about my book, ‘The Golden Shore’ at the Cabrillo Marine Aquarium in the southern California port city of San Pedro. Here I met lots of inspiring people specializing in everything from copeopods (tiny crustaceans) to greening ports (Geraldine Knatz) plus fell in love with the aquarium’s exhibition of squiggling 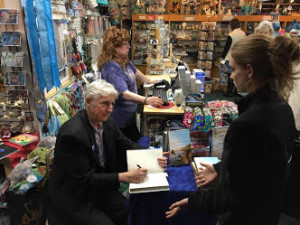 shark babies both in their eggs and newly hatched. I also got to cruise past the 35-acre AltaSea complex in the Port of LA that will soon include a range of marine science, educational and ocean industry startups.

The next morning I watched surfers catching waves within sight of stacked shipping containers at the largest port complex in the Western Hemisphere. At the same time two Stellar Sea Lions have recently been spotted hanging out with their smaller California Sea Lion cousins just off the port entry, the first time these endangered pinnipeds have been seen off southern California in generations. So can urban coastlines really combine dense human populations with healthy coasts and ocean environments? Yes we can.

The marine community lost a good friend, award-winning underwater filmmaker, shark advocate and all around nice guy when 63-year-old Richard Theiss crossed over the bar after a battle with cancer on February 5. His work has appeared on National Geographic, PBS, Discovery and elsewhere. Our thoughts go out to his family. Here’s a link to one of his many fine films – – a just under 2 minute ode to tiger sharks titled, ‘Elegance in Black & White’ 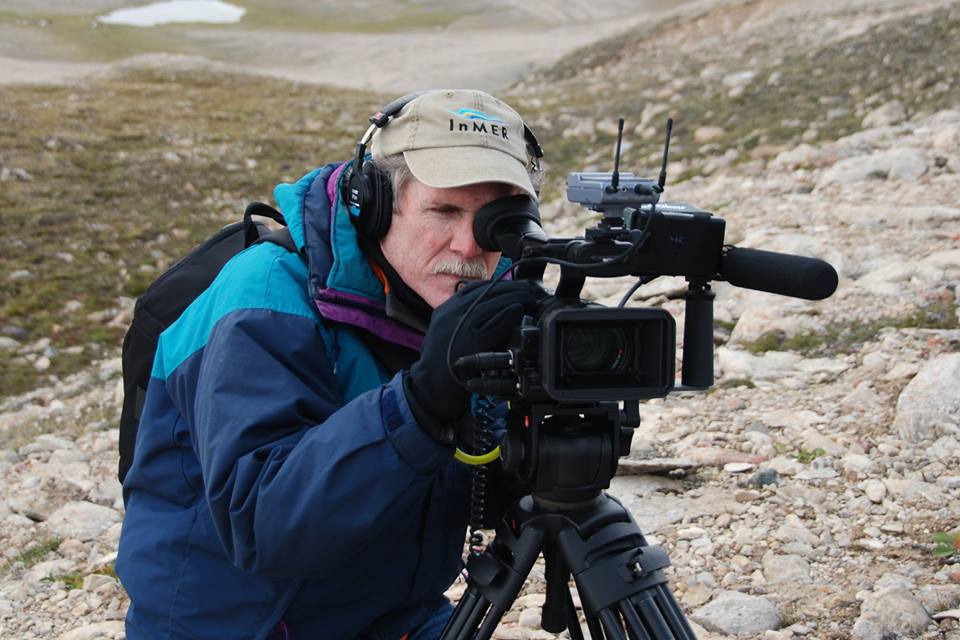 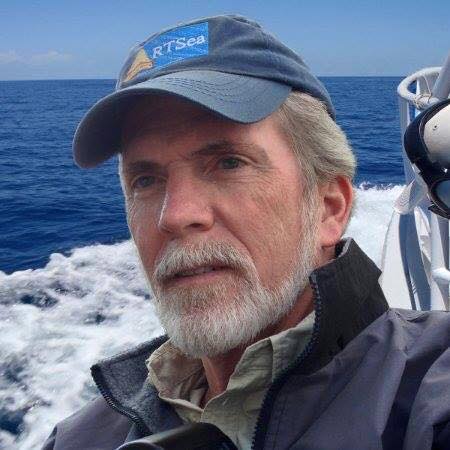 Our spring mobilization in our nation’s capitol including the 5th Blue Vision Summit (BVS5), 5th Healthy Ocean Hill Day visits and 8th Peter Benchley Ocean Awards will take place May 11-14 in Washington DC. For the latest on ocean leaders attending, sponsors and registration check out the BVS5 pages at http://www.bluefront.org/blue_vision_blog/2015-summit/ 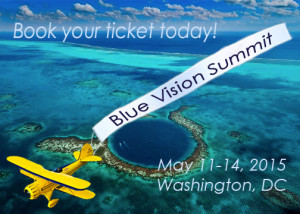 are looking for about 20 volunteers to help us with outreach and organizing leading up to the Summit and a host of support activities during the days of the summit. If you’d like to volunteer please apply HERE. Feel free to contact us at info@bluefront.org or call our outreach coordinator Kathleen Collins at 202-387-8030 if you have any questions.

In 2004 at our first Hill Day we met with 3 Senators, 12 House members and 29 House & Senate staff members to promote ocean and coastal protection. At our last one in 2013 our 21 state delegations met with 7 Senators, 16 House members and more than 65 staffers. If you’d be interested in helping to lead or organize a state delegation to meet with your elected representatives on May 13 please contact us at info@bluefront.org

And if you’re concerned about how to raise the funds to get to DC but know you need to be there check out Chris Palmer’s ideas on how to do it at: https://bluefront.org/chris-palmer-on-fundraising-4-blue-vision-summit/