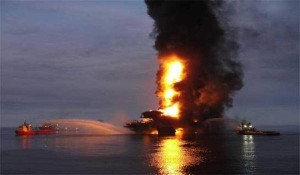 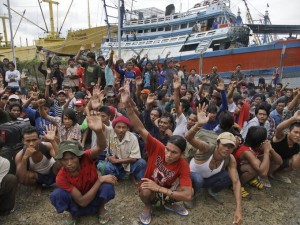 On Wednesday April 1st a Pemex oilrig blew up in the Gulf of Mexico killing 4 workers with 3 missing and presumed dead and another 47 injured.  Luckily no massive spill took place like with BP’s Deepwater Horizon blowout that killed 11 workers and dumped 5 million barrels of oil into the Gulf of Mexico just five years ago this month.

On Thursday April 2nd a giant 330-foot Russian Factory Trawler, the Dalny Vostok sank in the Pacific killing 56 crewmembers from Russia, Burma and elsewhere with another 13 missing and presumed dead. It keeled over while trying to pull in an 80-ton fishing net.

Then on Friday April 3rd over 300 mostly Burmese slaves, forced to work on Thai fishing boats without pay and often beaten and imprisoned onboard and on an isolated Indonesian island were freed by Indonesian authorities following an Associated Press expose. The A.P. reported on how the illegal pirate fishing boats used slave labor to feed their product into the global seafood market including U.S. outlets.

Our work as advocates for healthy seas have real world consequences when we don’t succeed.  The 5th Blue Vision Summit (BVS5) coming up May 11-14 in Washington DC can build the strategies and coalitions that will minimize ocean disasters: BP type oil spills, unsafe pirate fishing, climate disruption, plastic pollution and widespread loss of life both human and wild.

The Summit will promote and celebrate bottom-up solutions such as community based fishing family initiatives that have helped establish fully protected local waters in places like Port Orford Oregon, Culebra Puerto Rico and Barbuda in the Caribbean, all of which will be represented at the Summit. It will highlight the links between the environment, economy and equity from Far Rockaway in New York City as local city councilman Donovan Richards will tell us to the icy waters of the Arctic as the commandant of the U.S. Coast Guard Admiral Paul Zukunft will report.

The Summit will address the risks to businesses of our failure to deal with issues such as Overfishing, pollution and Ocean Acidification that has already impacted companies including Legal Sea Foods and Taylor Shellfish of Washington whose corporate leaders will report on their responses. At the same time it will highlight the benefits of cleaning up pollution that impact communities along our coasts. This is what the ports of LA and Long Beach chose to do eight years ago as a Long Beach port official will explain.   As a result of their action plan they’ve reduced port pollution over 75percent. Their neighboring communities of San Pedro, Wilmington and Long Beach California are now cleaner and healthier with reduced rates of cancer and childhood asthma. As a result clean air lawsuits have gone away and the ports are able to expand after a decade of delay, helping speed a billion dollars of goods across their docks every day. 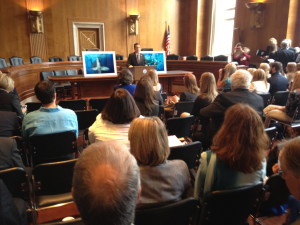 Elected Ocean Champions like Rep. Sam Farr of California and Senator Brian Schatz of Hawaii will also meet with delegations from their states on ‘Healthy Ocean Hill Day’ May 13 when conference attendees from more than 20 states take their message of ocean health to Capitol Hill. The Summit and Hill Day will also bring together high school and college student and youth leaders from many shores including New York, Florida, Colorado, North Carolina and Australia.

These are just a few of the solution-oriented folks who will get to network, meet and strategize with ocean leaders and winners of the Peter Benchley Ocean Awards that take place May 14 following a seminar at National Geographic.

Among other keynote BVS5 speakers and Benchley Award winners are the Administrator of NOAA Dr. Kathy Sullivan, National Geographic Explorer-in-Residence Dr. Sylvia Earle, Secretary of State John F. Kerry (winner of the Benchley Policy Award), Prince Albert II of Monaco (winner of the National Stewardship Award) and Fabien Cousteau, an ocean explorer and conservationist like his father and grandfather before him.

Questions to be resolved or at least advanced at BVS5 include; how marine conservationists become leaders in planning for the inevitable impacts of climate disruption along our shores and in our public seas, how we stop federal plans for offshore oil drilling on the Atlantic and in the Arctic and how we make ocean health and the blue economy a visible issue for presidential candidates and the public in 2016.

We know what the solutions are to the cascading disasters facing our living seas. The challenge is how we create the political will to enact them.

In 2010 Citizens for a Sustainable Point Molate (CFSPM), a project of Blue Frontier,

helped defeat plans for a mega-Casino complex with 4,000 slot machines, a hotel and high-rise parking at Point Molate a 422-acre natural headlands in the city of Richmond on San Francisco Bay. In that year’s election Richmond citizens voted 58% to 42% against the scheme and to reclaim the land for nature and recreation.

In 2014 we helped reopen the Point Molate Beach to the public for the first time in a decade. Shortly thereafter, with a grant from Berkeley’s Elmwood Cafe we organized the first field trip to Point Molate for a biology class from Richmond’s underserved JFK High School. This was a huge success re-connecting the teenage students to their city’s waterfront treasure, home to native grasslands, nesting ospreys, wild turkey, mule deer and shorebirds. This April 13, with support from the Strong Foundation, CFSPM sponsored our second JFK high school field trip, this time for chemistry students to get field experience studying water quality and ocean acidification along the shore. They also each got a copy of our book, ’50 Ways to Save the Ocean.’ Again they had a great time. This is how we build the next generation of Seaweed Rebels.

‘Saved by the Sea’ on the first Blue Vision 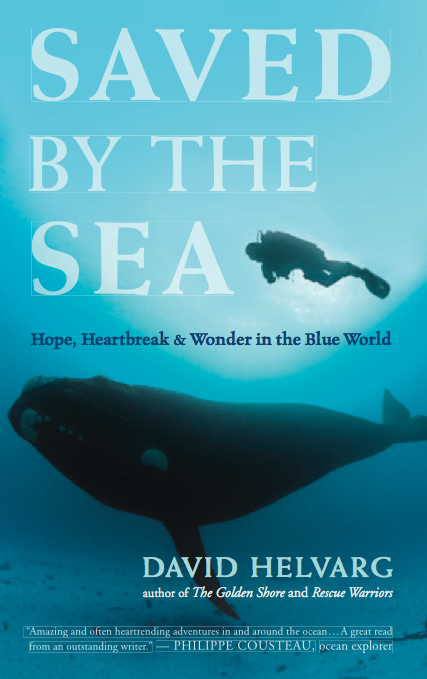 Today, April 14, marks the launch of my updated paperback, ‘Saved by the Sea – Hope, Heartbreak and Wonder in the Blue World,’ with a ‘Writers for the Sea’ event sponsored by the Bay Institute, Aquarium of the Bay and Blue Frontier at the Bay Model in Sausalito California. The evening’s discussion will involve myself, Biologist Wallace J. Nichols, author of ‘Blue Mind,’ (whose Blue Mind Summit in D.C. will proceed BVS5 on May  11) and Susan Middleton, photographer and author of ‘Spineless.’ Below is a brief excerpt from ‘Saved by the Sea’ describing the origin of the first Blue Vision Summit in 2004.

The years 2003 and 2004 saw two reports published by two U.S. blue-ribbon panels on the ocean, the first ones since 1969. The independent Pew Oceans Commission was made up of scientists, fishermen, environmentalists, and elected officials, including the governor of New York. Its chair, Leon Panetta, a former congressman and Clinton White House chief of staff, would head the CIA and Department of Defense under President Obama.

In response to the establishment of the Pew Commission, the Bush administration appointed the U.S. Commission on Ocean Policy. It included representatives from the offshore oil industry, ports, navy admirals, academics, and Titanic explorer Bob Ballard. Its chair, Admiral Jim Watkins, was the Pentagon’s former chief of naval operations and secretary of energy under the first President Bush.

Despite their very dissimilar make-ups, their findings were remarkably similar. Both commissions concluded that the ecological degradation of the ocean represents a major threat to the nation’s economy, security, and environment. They proposed a number of solutions for the restoration of ocean health, including an ecosystem-based management approach (also known as Marine Spatial Planning), a kind of ocean and coastal zoning that would incorporate a system of cleaned-up watersheds; estuaries; offshore shipping lanes and greener ports; wildlife migration corridors; clearly delineated clean-energy, national defense training, and fishing areas; recreational and marine wilderness parks; and other public benefits. They recognized that humans are a part of the marine ecosystem but also that the basic laws of nature—including biology, chemistry, and physics—are not amenable to negotiation or compromise. They also proposed a four-billion-dollar-a-year ocean trust fund to carry out their proposed initiatives.

In 2004, in response to these reports, our Blue Frontier Campaign organized its first three-day Blue Vision gathering in Washington, D.C., for some 250 leaders of marine conservation, recreation, and industry. 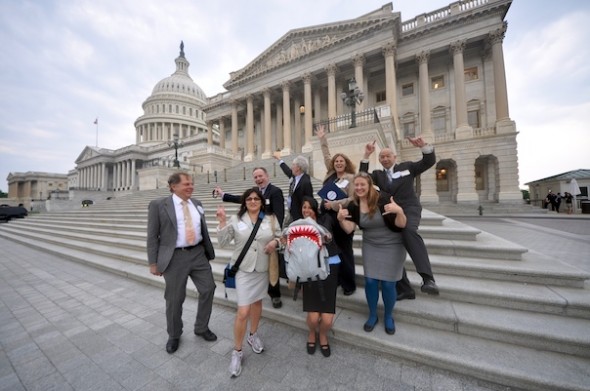 Our keynote speaker, the late marine conservationist and Jaws author Peter Benchley, contrasted his youth on Nantucket Island, when you couldn’t haul in a swordfish without a shark taking a chunk out of it, with today’s rapid decline of large predators. He recalled a dive off Costa Rica where he found the bottom littered with dead sharks whose fins had been cut off to sell for shark fin soup.

At one session we presented the first annual Blue Frontier Awards (now the Benchley Awards). The science winner was marine wildlife biologist Dr. Ransom Myers, of Dalhousie University in Nova Scotia, whose work included that disturbing 2003 study published in Nature explaining how 90 percent of large fish in the ocean have been scoured from the sea by overfishing just since the time I was born. “There is no blue frontier left,” he worried. “The ocean is changing in ways that we simply cannot fathom and we’re losing more and more biodiversity every day. There is no equivalent of a blue frontier organization in Europe or in Southeast Asia and I think we really need to take the vision and expand it worldwide.” Myers passed away in 2007.

We honor people like Benchley and Myers by continuing their efforts to alert the public about policies and behaviors that threaten the crucible of life on our blue planet and by proposing practical alternatives and solutions that can work.

And thanks to our sponsors who are making BVS5 possible.