A Wave of Blue Activists roll into D.C.

Ocean and Coastal advocates from across the nation and our blue world converged on Washington DC May 11-14 for an inspired week of action, education, citizen lobbying and celebration. Here’s a brief summary of what occurred at the 5th Blue Vision Summit and the 8th annual Peter Benchley Ocean Awards. 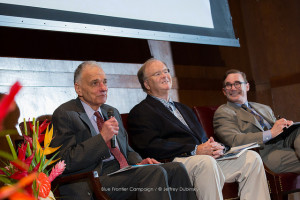 Following an all-day ‘Blue Mind’ Seminar BVS5 opened with an evening ‘Celebration of the Sea’ for more than 300 ocean citizens including Ralph Nader, Rep. Sam Farr and Legal Sea Foods CEO Roger Berkowitz who discussed how to build the ocean movement (hint, start local and build broad coalitions like with the clean-up of Boston Harbor or the California fight against offshore oil, be persistent in your organizing efforts).   Explorers Fabien Cousteau and Paul Rose of Nat Geo gave lively presentations on conservation and exploration although I was jealous that Paul got to harass polar bears with camera drones while I spent the last six months organizing conference events. The evening continued with schooling behavior around the food, drink, art, photography and nine ‘Writers for the Sea’ doing book signings for works ranging from ‘War of the Whales,’ to ‘Lunch wore a Speedo.’

Tuesday’s Summit workday included ‘State of the Seas’ talks by Senator Sheldon Whitehouse of Rhode Island (the Ocean State), NOAA Administrator Dr. Kathy Sullivan, Dr. Ayana Elizabeth Johnson of the Waitt Institute and U.S. Coast Guard Commandant Admiral Paul Zukunft who pulled no punches about the risks of operating in the Arctic, warning of a “black swan” incident — a disaster of historic proportion — if an oil spill or shipwreck were to occur there, because there would be no way to effectively respond to it. 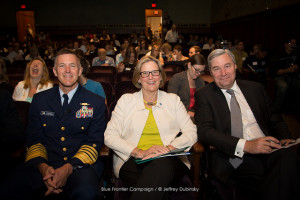 ocean such as Dr. Jeremy Jackson, NYC Councilman Donovan Richards, National Ocean Council Director Beth Kerttula, Taylor Shellfish Company’s Bill Dewey (whose oyster aquaculture operations in Washington state are being impacted by ocean acidification) and dozens of others speaking from their hearts and fins about the challenges and solutions to key issues: coastal climate impacts, offshore oil, the future of fish and fishing (integrated aquaculture on Long Island Sound and community-based fishing management in Port Orford Oregon are two solutions needing to be scaled up), the polar regions, Marine Protected Areas, marine pollution, ocean recreation (getting the industries who profit from our ocean stoke to work with us for its protection), the Blue economy and other deep topics. That evening included a ‘Blue the Dive’ reception sponsored by the Colorado Ocean Coalition and D.C.’s Blue Planet Scuba dive shop and theme dinners on noise and plastic pollution, using video and using your blue mind to connect with our seas.

On Wednesday we held the largest citizen lobby for ocean conservation in U.S. history! 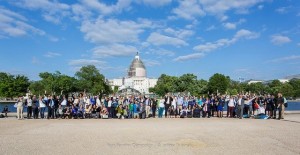 More than 130 ‘Healthy Ocean Hill Day’ participants were welcomed by Senator Brian Schatz of Hawaii and 4 members of the House including Rep. Ben Ray Lujan of New Mexico who clearly understands that every state’s a coastal state. Our 24 state delegations went on to hold 163 Hill meetings with 9 Senators, more than 25 House members and dozens of their staffers to voice opposition to new offshore oil drilling in the Atlantic and the Arctic and support a bipartisan bill against IUU (Illegal, Unregulated and Unreported) fishing and pirate fishing. The day of our visit a senate bill was introduced as a companion to the House bill we were supporting. We expect to follow up on this commonsense bipartisan anti-fish piracy (food and national security) legislation until it becomes the law of the land. Foot weary after our long march through the halls of Congress we gathered afterwards for a group photo in front of the Capitol. Our only disappointment was it was too windy to inflate the Great Whale Conservancy’s 90-foot inflatable blue whale lest it take off and become a whale over Washington (the Secret Service warned they’d shoot it down if it left the ground). That evening the D.C. Chapter of Surfrider held a celebratory party including surf videos where not everyone drank like fish. 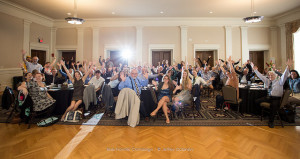 ‘Ocean in 2050’ at National Geographic headquarters. Panelists included His Serene Highness Prince Albert II of Monaco, Enric Sala of National Geographic’s Pristine Seas project and Admiral Chuck Michel, Chief of Operations for the Coast Guard. The Forum was moderated by “Her Deepness” Dr. Sylvia Earle. That evening’s Peter Benchley Ocean Award presenters included Senators Schatz of Hawaii and Ed Markey of Massachusetts. The winners included Prince Albert II for National Stewardship, Dr. Daniel Pauly for Science, The Economist for Media, Nainoa Thompson for Exploration, 21-year-old “Shark Girl” Pip Stewart won the Christopher Benchley Youth Award and Todd Miller of the North Carolina Coastal Federation and Dana Beach of the South Carolina Coastal Conservation League won the Hero of the Seas Award for their longtime work on coastal restoration (now threatened by proposed offshore drilling).   Secretary of State John F. Kerry who won the Policy Award was unable to attend because he was in Russia (damn you Putin!). He did however send a letter of regret and thanks. His presenter Senator Markey spoke of the links between this winter’s massive snowfalls in Boston and record low snow in Alaska and changes in the Arctic from fossil fuel fired climate change that is also warming the ocean. He noted that his state’s famed cod and lobster are “voting with their fins and claws” by moving north into colder waters. We have our work cut out for us but our Benchley winners remind us that we still might be able to scale up our solutions faster than our problems. 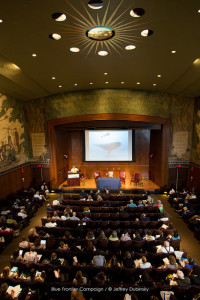 Benchley Awards, sometimes called ‘the Academy Awards of the Ocean’ were followed by a sold-out dinner that included gourmet vegetarian fare (more sustainable than sustainable seafood) and lots of socializing. The next day the Washington Post society page ran a story on it by a reporter who approached the Prince who has explored both poles and worked for marine protection from the high seas to funding vital research on ocean acidification and asked his serene highness, whose twins were recently baptized, ‘Why are we all so obsessed with royal babies?” Really? I thought some of us were more concerned with saving our blue planet.

The feedback from the 400 plus people who attended the Blue Vision Summit and Benchley Awards has been outstanding in our shared belief we advanced the networking, strategy and power of the marine conservation movement May 11-14. Just doing our part to restore the blue in our red, white and blue. 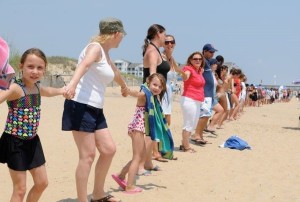 The day after BVS5 some 30 folks from Oceana, Sierra Club, Surfrider, Greenpeace, OCS Coalition, Clean Ocean Action, Blue Frontier and other Summit participants gathered to plan strategy in the ongoing fight against bipartisan greed (new air gun surveys and oil drill leasing). As grassroots support grows so do our hopes for effective field campaigns (what I call Sea Party activism) that will put a final stop to this nonsense.

The following day, Saturday May 16 thousands of people on dozens of U.S. beaches participated in the 6th annual Hands Across the Sands protest against offshore drilling and in support of clean 21st century onshore and offshore energy alternatives to coal and oil, once the leading energy sources of the 16th and 19th centuries. In Seattle hundreds of “kayaktivists” surrounded Shell Oil’s Arctic exploratory rig, Polar Pioneer, hoping to use their bodies (and kayaks) to keep it away from Alaska’s Chukchi Sea this summer. Thanks to Dede Shelton and other ‘Hands Across the Sand’ organizers. 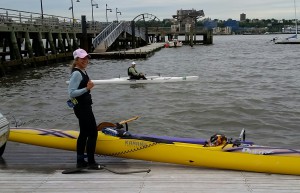 On May 20th Blue Frontier’s Field Organizer Margo Pellegrino, having already paddled solo outrigger canoes from Miami to Maine, Seattle to San Diego and in the Gulf of Mexico among her other blue adventures, launched her Big Apple-2-Big Easy paddle that will take her from Newark to NY to Chicago this summer via the Hudson, Erie Canal and Great Lakes, continuing next summer down the Mississippi to New Orleans. Along the way she’ll meet with and promote clean water activists linking all our causes be they protecting our rivers, watersheds, coasts or mother ocean. She’s already gotten good local TV coverage along the way. Here’s an EarthJustice report on Margo’s latest eco-adventure.

And to follow Margo’s daily reports on her progress go to: https://paddle4blue.wordpress.com/ 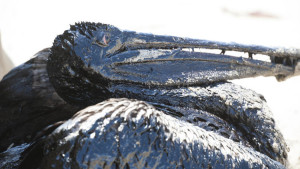 The latest inevitable disaster in the oil industry has seen the only oil pipeline in Santa Barbara County California without an automatic shutoff valve (because the company won a lawsuit against the regulators) rupture and spill 100,000 gallons of oil including 20,000 gallons into 9 miles of coastal waters killing seabirds, oiling sea lions and exposing other wildlife (and people) to danger. The onshore pipeline was linked to the offshore oilrigs still pumping off Santa Barbara. Here’s an LA Times opinion piece I wrote on May 22 arguing this latest atrocity (or “inconvenience” according to the pipeline company) is another reason we should “Get Oil Out.”

Washing up near you?

The BVS5 Celebration of the Sea included the largest book signing by ocean authors ever, 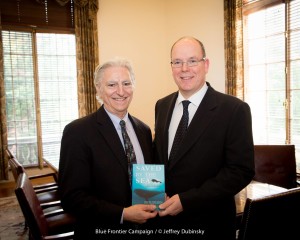 including my signing ‘Saved by the Sea – Hope, Heartbreak and Wonder in the Blue World.’ Here I am shamelessly presenting my book to Prince Albert II of Monaco.

Sylvia Earle claims, “This book has the power to change the way you think about the world, about yourself and about the future of humankind.” I suspect if she really liked it she’d have said, “…the future of fishkind.” Still, having written about traumas and changes the ocean and I have shared over the last half century I’m looking for opportunities to speak to different audiences both about the book and the next steps we need to take to make sure our ocean and coastal challenges become part of a Sea Party debate during the 2016 presidential elections and beyond. Anyone interested in bringing me to speak to their group, school or other venue feel free to contact Kathleen Collins or myself at info@bluefront.org. And of course ‘Saved by the Sea’ is available for purchase and review on Amazon or, better yet, at your local independent bookstore.