June has arrived and we should be at the beach chasing the gulls away from our french fries and meeting up with old friends (whatever became of Spuds the Bud dog?), also getting our stoke in the waves because you protect what you love. Being at the beach is like the good old days in the here and now. As Lord Byron wrote in 1818: 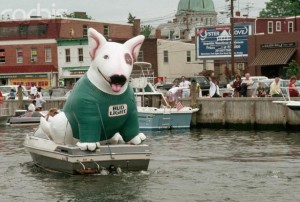 “And I have loved thee, Ocean! And my joy

Of youthful sports was on thy breast to be

I wantoned with they breakers. They to me

Were a delight; and if the freshening sea

Made them a terror, ‘twas a pleasing fear.”

That’s the best description of bodysurfing I ever read.

Feedback from last month’s Blue Vision Summit and Peter Benchley Ocean Awards also continues to be superlative. Energized activists have returned home to carry out myriad activities in their home waters, congressional districts and states. One of their inspirations was our four opening keynote speakers; Senator Sheldon Whitehouse of Rhode Island (“The Ocean State”), U.S. Coast Guard Commandant Admiral Paul Zukunft, NOAA Administrator Dr. Kathy Sullivan and Dr. Ayana Elizabeth Johnson of the Waitt Institute. Not since JFK met with Jacque Cousteau at the White House in 1961 has Washington D.C. heard such an amazing hour of discussion of the state of our seas. For an 18-min. highlights reel go HERE.

What we know we don’t want is an ocean full of pirates and criminals stripping it of its remaining marine wildlife while carrying out the other activities organized crime tends to from human trafficking to drug running. During Blue Vision we held the largest citizen lobby for ocean conservation in U.S. history (see Blue Notes 135) to get Congress to pass legislation to stop Illegal, Unreported and Undocumented (IUU) fishing among other things. Some progress has been made since our visit last month.

Of course it’s hard not to admire the direct 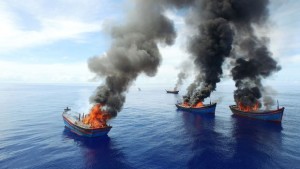 approach of the island nation of Palau which just burned four pirate fishing vessels caught in its waters. Not to be outdone Indonesia burned 44. Now we’re getting into an air quality issue. Before the Peter Benchley Ocean Awards Forum on May 14 I asked the U.S. Coast Guard’s chief of Operations Admiral Chuck Michel why we didn’t do to pirate fishing vessels what we do with drug runners in the Pacific; take off their crews, evidence and fuel and then sink them. He said he saw nothing wrong with that, it would just require guidance from above. OK Congress, Mr. President, it’s your call!

Our other Healthy Ocean Hill Day request of Congress was to “Get Oil Out,” to stop senseless plans to expand offshore drilling along the Atlantic coast and in the Arctic Ocean. While the most recent Santa Barbara oil spill is still being cleaned up in California, Chevron’s massive Big Foot oil platform in the Gulf of Mexico lost its mile-long teather cables and couldn’t be secured where it was supposed to start drilling so it’s headed back to shore as soon as they can find a dock big enough to receive it. The U.S. Energy Information Administration told the press the delay of this major project isn’t a problem because land based oil and gas output in the United States has risen so steeply in recent years that events in the Gulf of Mexico 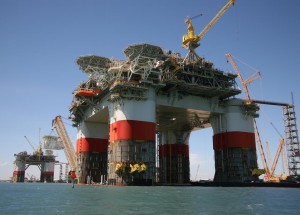 barely move the needle anymore in terms of impact on supplies and pricing.

So, just to be clear, the Gulf of Mexico that was horribly impacted 5 years ago with the BP oil blow out that’s still killing dolphins and destroying habitat, this body of water where almost all U.S. offshore production now takes place, is more or less insignificant in terms of U.S. oil supply. Yet the Obama administration and many politicians both Republican and Democrat want to put half the eastern seaboard along with the frontier waters of the Arctic Ocean at risk to drill for more unneeded fossil fuels. OK, as long as that’s clear… 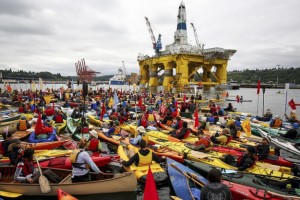 Big props to the Sea Party ‘Kayaktivists’ in Seattle who blocked Shell’s giant Polar Pioneer rig slated to head up to the Arctic this summer. On June 12 two protestors also chained themselves to the Shell support ship American Trader (think Boston Tea Party) and on April 15 over 20 more were arrested trying to block the pioneer as it was towed out of port. I’ve been on offshore rigs and super-tankers in California, the Gulf of Mexico and the Persian Gulf and witnessed oil spills in California and the Gulf. When we put a stop to proposed new drilling under the Reagan Administration in the 1980s it was still a question of marine pollution versus energy. Today it’s a product liability issue – oil, used as directed, overheats our planet and acidifies our seas as well as pollutes our beaches. Offshore 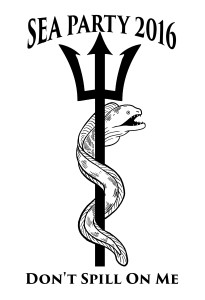 drilling is the Keystone pipeline of the Seas which is why, like with the pipeline, we need a massive citizen movement to stop it.

The newly formed Sea Party Coalition represents coastal and inland cities and towns, businesses, fishermen, surfers, divers, boaters and other concerned citizens regardless of political affiliation who support a healthy and vibrant coastal economy and oppose proposed new oil surveying and drilling along the Atlantic Coast and in the U.S. Arctic Ocean. Among the initial 33 groups signed on are the North Carolina Coastal Federation, South Carolina Coastal Conservation League, Gulf Restoration Network, Friends of Palm Beach, Friends of the Earth, Blue Frontier, Alaska Inter-Tribal Council, Pacific Coast Federation of Fishermen’s Associations, Waterkeeper Alliance, Greenpeace USA and Surfrider Foundation. For the full Sea Party Coalition statement and growing list of members look HERE. If your group, city or business would like to become a member of the coalition please contact us at info@bluefront.org 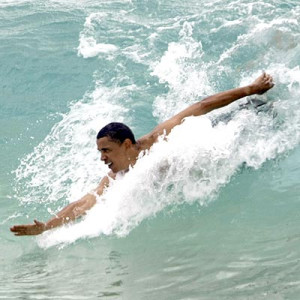 World Ocean Day was more robust than usual this year. While it got its start at the 1992 UN Earth Summit in Rio where I saw a nighttime march of 30,000 global and local activists formed up behind a banner reading, “When the People lead the Leaders will follow,” it didn’t get its official UN designation until 2008.   Then last year President Obama declared June ‘Ocean Month,’ in the U.S. a proclamation he repeated this year, stating, “no matter where you live or who you are, a healthy and thriving ocean is essential to all people all year… I call upon Americans to take action to protect, conserve, and restore our oceans, coasts, and Great Lakes.”

So that’s what we’re doing, starting with our Sea Party protests of his proposed oil drilling off the Atlantic and in the Arctic. We’re also supporting clean energy development like offshore wind where it’s responsibly situated. After all no wind spill ever destroyed a beach or a bayou. 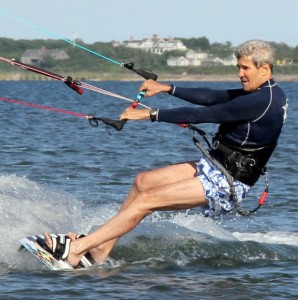 Hill Oceans Week (CHOW) and a Blue Ocean Business Summit with online discussion among a number of ocean luminaries. I also got to be one of more than 30 contributors to a ‘What’s working’ series of opinion pieces put out by Huffington Post. Here’s mine titled Solutions Are the Easy Part HERE.  To grow solutions faster than the cascading problems however is the real challenge.

As one of our 2015 Peter Benchley Ocean Award Winners, Secretary of State John F. Kerry, stated on Ocean Day, “Protecting the ocean is a task too big for any government or institution to handle alone. All of us can – and must do – our part. Choosing sustainable seafood, carpooling or taking public transportation more often, picking up litter, and reusing products are just a few small ways that we can all help to protect the ocean we share. If we all take the steps we’re able to take, day after day, we can work to keep the ocean clean and do our part to promote a sustainable, responsible relationship with our planet.” For more ideas on how to follow his advice read 50 Ways to Save The Ocean

Getting Stoke With Every Stroke 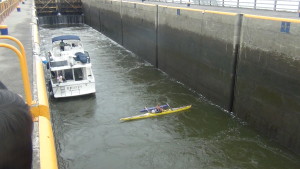 Blue Frontier’s Margo Pellegrino is now into her 4th week of paddling from New Jersey to Chicago (and on to New Orleans next summer). She’s through the Erie Canal and on Lake Erie past Cleveland where I used to summer as a child (yes, it’s a long story). You can keep up with her daily adventures linking river, lake, coastal and ocean activists and meeting and making “strangers no more,” at her website paddle4blue.com

While oil is still being cleaned up in Santa B 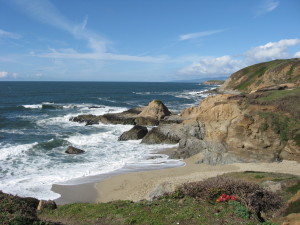 arbara in Southern California in Northern California years of citizen lobbying supported by former Congresswoman Lynn Woolsey has led to the near tripling in size of two national marine sanctuaries where oil drilling will not be permitted.

On Sunday June 28 people will be holding a celebration of the expansions of the Cordell Bank and newly renamed Greater Farallones Marine Sanctuaries in the small coastal town of Gualala. It begins at 10 AM at the community center just 2.5 hours north of San Francisco on the Redwood Coast.

Writers For the Sea 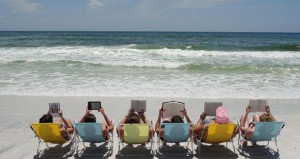 Awareness Project, Inc. (DBA Blue Frontier): Its purpose is to support and promote authors and their books that are written about the greater part of our blue planet that is ocean. Other purposes include promoting understanding of the critical state of our living seas in terms of a global ecosystem at risk and ways in which engaging books and the additional media that they generate can help educate and activate the public, also WFS will be mentoring emerging writers including youth and students. It’s 35 ‘plank owners’ or founding members include Carl Safina, Susan Casey, J. Nichols, Sylvia Earle, Juliet Eilperin, David Doubilet, Callum Roberts, Jim Toomey, Ray Troll, Susan Middleton and many other authors whose company I’m honored to be schooling among.

For the full list and description go to Writers for the Sea’s new Facebook page HERE. It’s also open to readers’ comments. I’ve also written an article about WFS’s founding that will appear shortly in Publishers Weekly.