Waves, Sharks, Coasties and Blue News You Can Use

On February 13 my friend Dave and I launched his 16-foot Boston Whaler at Pillar Point Harbor near Mavericks, the famous California break where some of the world’s top big wave surfers were about to ride the largest waves ever seen in any surf contest.

Our friend June joined us at the boat ramp just after 7a.m. and we headed out the harbor channel but with the strong incoming tide were battered and soaked within seconds of clearing the entrance. After less then ten minutes of testing the boat’s capabilities we turned around and headed back in to wait for the high tide to peak.

While we waited a big wave washed over the crowded contest beach, knocking people off their feet and off the seawall. From where we were we saw a tournament tent, big speakers, metal scaffolding, several people and an empty skiff washed out into the harbor followed by other people going to their rescue. 13 were injured according to news reports.

With the tide full we headed back out the harbor way a little after 10:30 and managed to surf and slide over the swells a few miles inside the reef before rounding back up towards the breaking surf line half a mile offshore. There we joined a flotilla of some forty camera boats, observers and PWCs (Personal Watercrafts) with drag sleds that were there to assist the 24 invited contestants plus a few locals taking on the giant waves. 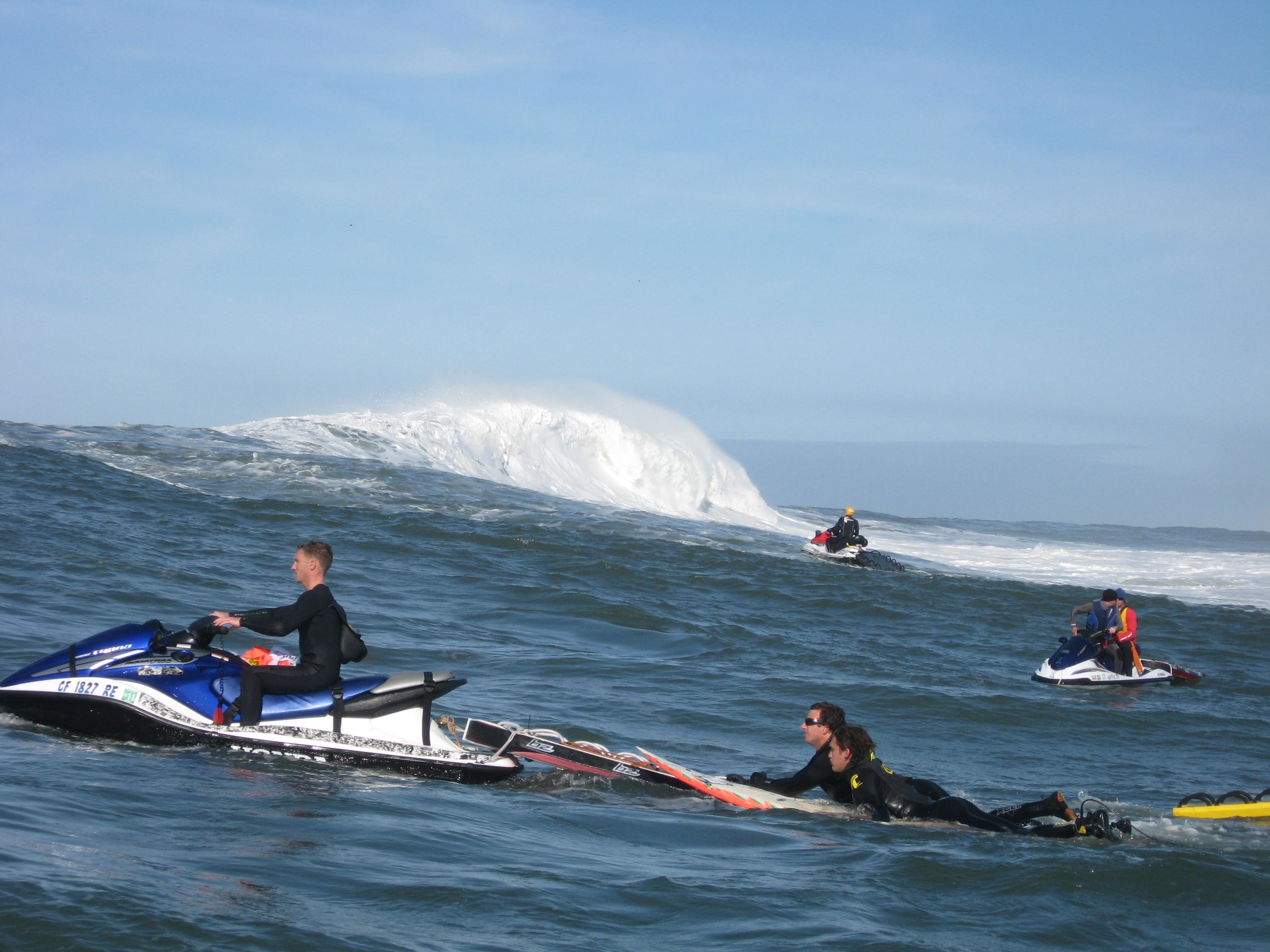 From a few hundred feet distance the contest surfers looked like they were riding moving mountains of dark green water chased by white avalanches where the lip of the giants reached out and then broke to gravity, trailing twenty foot rooster tails of mist behind them that set off fractured rainbow shimmers.

“It’s hard to explain how much water was moving around out there,” said the eventual contest winner Chris Bertish of South Africa. “I took the worst beating of my life out there.”

We watched heart-stopping drops and people making impossibly steep lines down the waves and several scary wipe outs with big flying boards and surfers skipped like stones down the face of the waves before hitting the trough and being swallowed up in body munching cataracts that thundered down on them like Thor’s hammer. One surfer thought he’d made his ride but failed to see the Mac Truck’s weight of white water suddenly coming up behind him, “Dude that lip just swallowed him,” one of my friends noted.

We saw Shane Desmond of Santa Cruz (who came in second) take some heart stopping drops and make it through the boom and reverb. Some local (I assume) who wasn’t wearing a brightly colored rash guard (that contestants had on so the Judges ashore could see who was taking which drop) took a steep angle and then popped back up through a bottom curl that looked less like a tube than a highway tunnel. People cheered and hooted. It was going off like bombs on 10-second intervals and as the contest came down to its final heat the top guys hung farther out waiting for the really big rides on 40 and 50 foot faces that periodically showed up like Jurassic Peaks. Those few observers who weren’t taking pictures or trying to avoid collisions with other boats just shook their heads in disbelief. 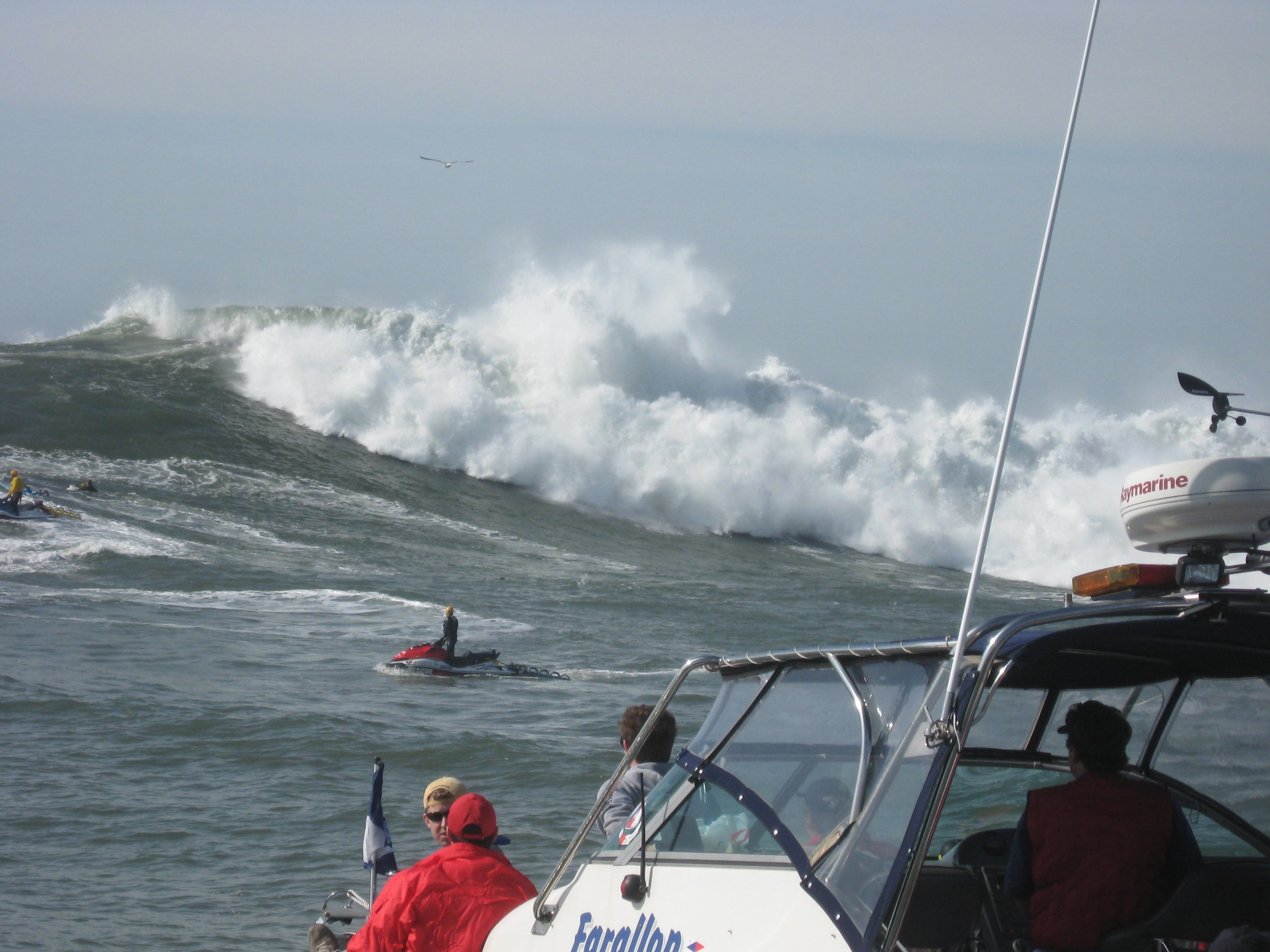 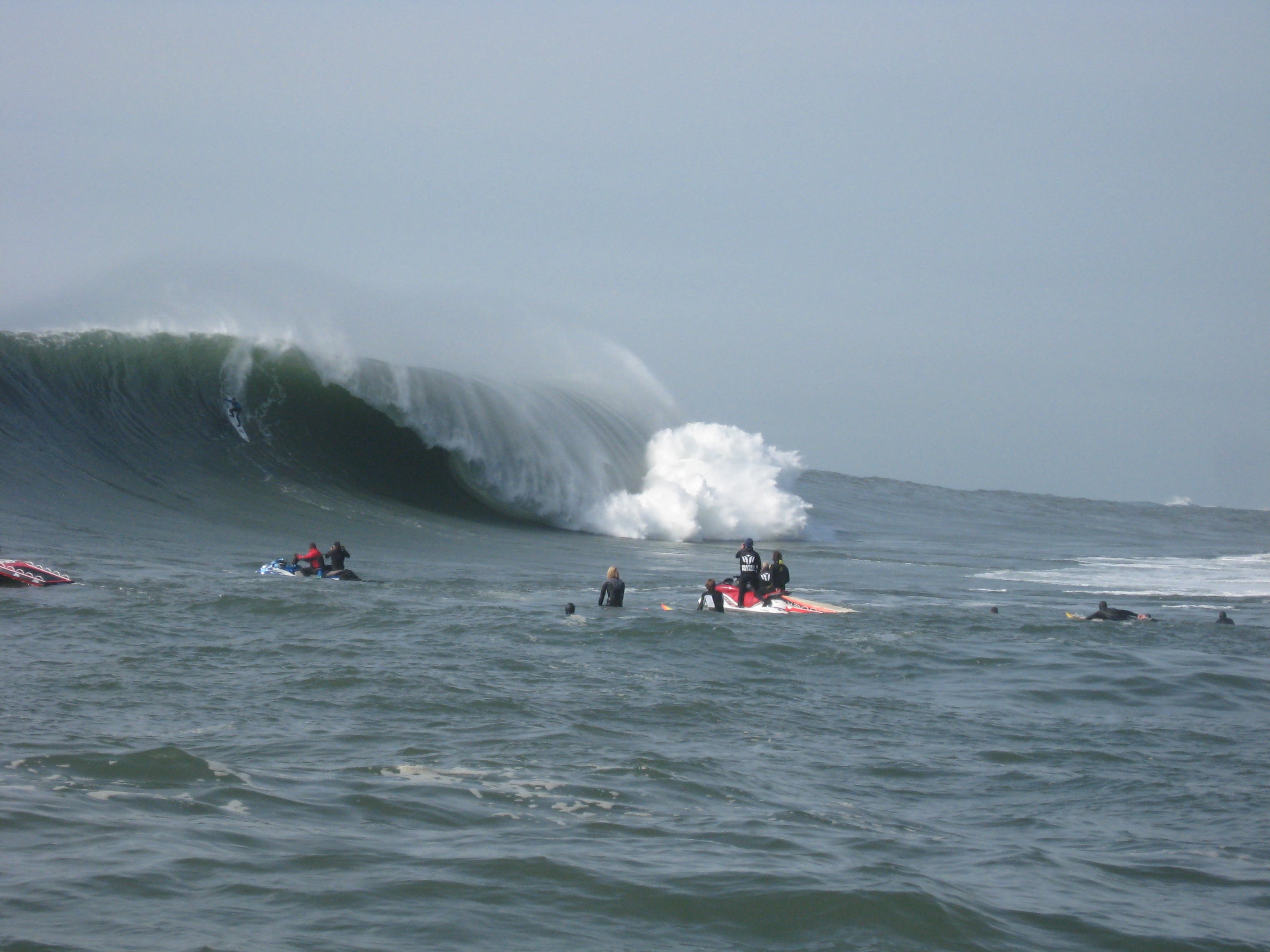 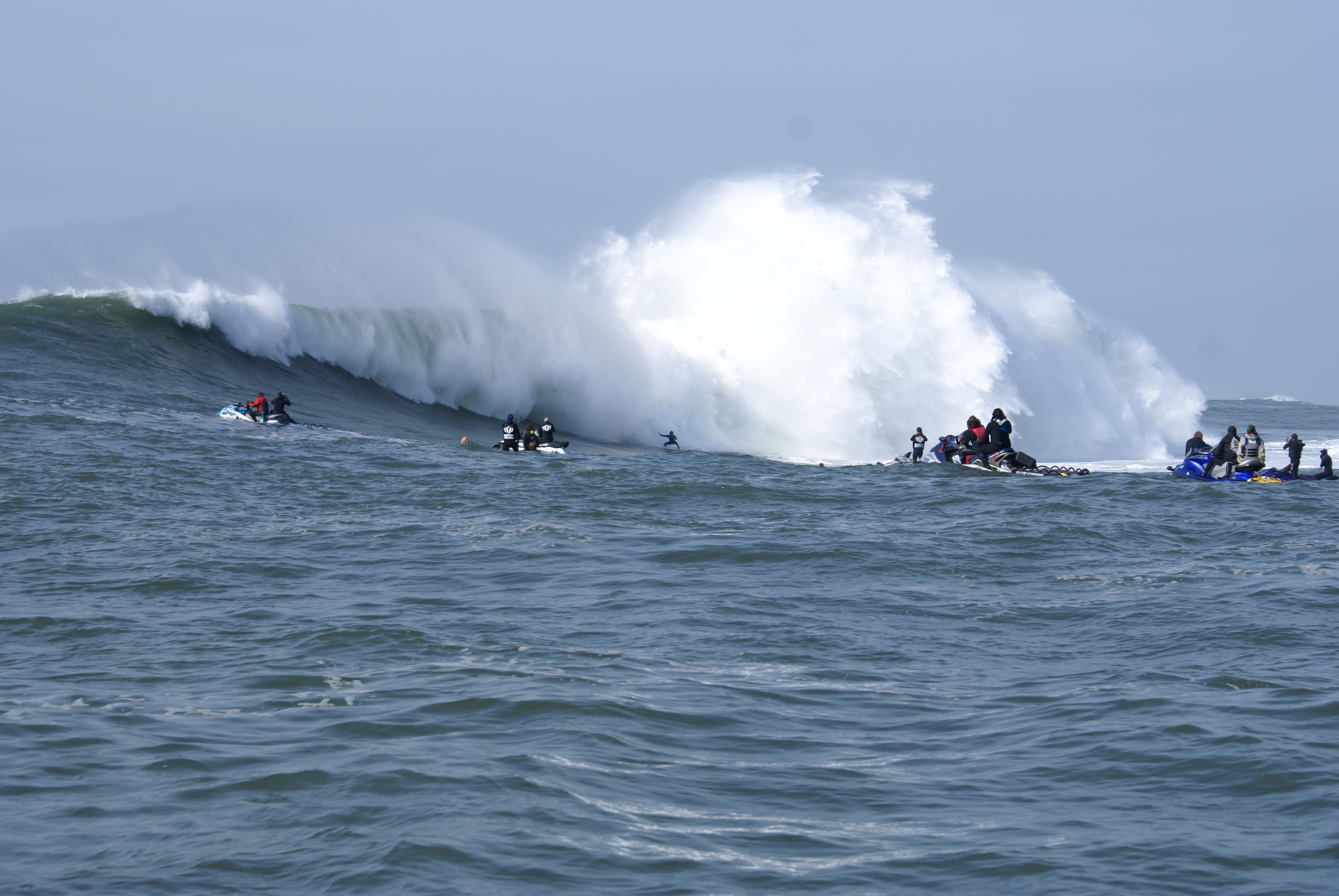 Back at the boat ramp Dave went to get the car and trailer as a gull stole a plastic bag with bread from among our stuff. The bird was floating nearby and I was shouting at it to not mess with the plastic (‘Cause we hate that stuff in our oceans). Shane Desmond who’s just pulled in with his PWC guardian jumped on his board and took the bag away from the bird. I tossed the gull the soggy bread and then gave a copy of ‘50 Ways to Save the Ocean’ to Shane and congratulated him. Turns out he works for Whole Foods and is concerned about plastic pollution of the seas, so we discussed things like charging a fee for single use plastic bags and I realized he’s both a regular nice guy who loves the ocean and a meta-human, one of a handful of our species who can ride moving mountains of water five stories high and not only survive but make it look sweet.

Not surprisingly the Coast Guard was standing by at Mavericks with an 87-foot Cutter, 47-foot surfboat and orange dolphin helicopter overhead, just in case. The Coast Guard’s maritime missions cover not only potential and actual search and rescue (saving 15 lives a day) but port security, buoy tending, oil spill response, narcotics and migrant smuggling interdiction and fisheries enforcement that provide us the safety, security and stewardship on our public seas we’ve come to expect. As the 21st century advances into its second decade it’s becoming increasingly clear America needs its “Coasties.” 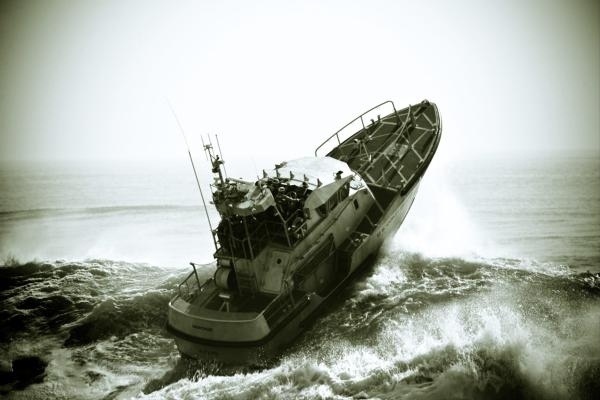 Since the attacks of September 11, 2001 the Coast Guard budget grew from around 5 billion to just over 10 billion dollars, but most of that has been focused on security. Its armed responders grew in number from around 300 to 3,000 (out of 42,000 active duty members). But as a top admiral explained to me while I was working on my book, ‘Rescue Warriors,’ “We shifted assets to security, and we’ve failed to keep pace on the safety and environmental side.”

President Obama’s 2011 budget not only fails to address this problem but actually mandates a 3 percent cut for the Coast Guard that will require a reduction in force of some 773 active duty positions next year. At the same time the budget provides 2.3 percent growth for the Pentagon giving the other four military services over $708 billion.

But when you look at the collapse of global fisheries and rise of piracy, seaborne migrants, coastal populations at risk, the growth of commercial shipping and impacts of fossil-fuel fired climate change the sensible response should be to double the Coast Guard in this decade and double it again by 2030 so it’s closer in size to the U.S. Marine Corps than the New York Police Department. You could grow the Coast Guard 25 percent this year just with the price of extra C-17 transport planes that the Pentagon says it doesn’t need to defend the nation but that contractor-friendly politicians on Capitol Hill keep pushing.

For more on why we should be expanding rather than cutting the Coast Guard’s budget check out my story in Huffington Post at: http://www.huffingtonpost.com/david-helvarg

Also check out my latest piece on the CIA and the Law of the Sea.

And the White Sharks

A survey completed as part of the Census of Marine Life using tagging studies of white sharks finds their numbers are about the same as another wild predator species that’s been listed as highly endangered, the tiger (not to be confused with the tiger shark). Unfortunately with predator fish, even those that can grow to 20 feet and weigh over two tons, out of sight is often out of mind (unless demonizing them in film and during ‘Shark Week’). One of the discoveries of tagging was that white sharks are far ranging critters. The same animal seen off California in the fall could be cruising off Hawaii and mistaken for a different animal the next summer. Of course we have little or no knowledge of their historic numbers but, as with the tiger, we know we’ve had a negative impact on their numbers. Meanwhile I suggest you check out The Great White Shark Song on You Tube for a funny but telling take on this apex ambush hunter. That and Surfing Dolphins were among my favorite shorts at this year’s San Francisco Ocean Film Festival. And remember, shark is the new dolphin.

– We’re likely to see a raft of news stories on the state of the ocean if President Obama issues an Executive Order for a new (really first) U.S. Ocean Policy as expected next month. Meanwhile op-eds and letters to the editor always help. Remember what DJ Scoop Nisker used to say, “If you don’t’ like the news, go out and make some of your own.”

– On February 17 the NY Times reported on a slow boat to China, actually a fleet of them. Seems Maersk shipping of Denmark (a major player in the global fleet) has slowed many of its ships to half speed while cruising the ocean. It saves as much as 30 percent on fuel while greatly reducing emissions of greenhouse gases, something Europeans see as a future market requirement even if our Congress continues to take the Neville Chamberlain approach to fossil fuel use.

– On the documentary front, Louie Psihoyos’ ‘The Cove,’ about the dolphin slaughter in a fishing town in Japan is up for a best documentary award at the Oscars this year (he’s also a winner of the upcoming Blue Frontier/Peter Benchley Award for Media). Disney is also planning to release its spectacular new documentary, ‘Oceans’ on Earth Day, April 22. It’s made by the same people who did ‘Winged Migration,’ (shall we call it ‘Finned Migration?’). And on a more modest documentary note, Dave McGuire of Sea Stewards Studios has just released a nice video compilation of some of the ‘Wear Blue for the Oceans Day’ events that took place January 13. Check it out here!

– Green books also seem to be getting bluer. In Mindy Pennybacker’s upcoming, “Do One Green Thing,” there is an extensive and well-informed chapter on Fish that explains why eating lower on the marine food web is better for human health and mother ocean. And speaking of consumer-friendly books we received a nice photograph of International Fund for Animal Welfare representative Jake Levenson giving a copy of ‘50 Ways to Save the Ocean’ to one of the primary school teachers in the village of Le Plaine on the island nation of Dominica (they all got copies). Jake’s an ex Fish Cop by the way, although I think they prefer the term, NOAA Enforcement agent.

– One final book note – The spring/summer tour for my memoir, ‘Saved by the Sea – A Love Story with Fish,’ is coming together nicely thanks to the work of lots of seaweed activist friends. If you or your group think you might like to help out please go to the ‘Projects’ section of our new www.bluefront.org website.