Obama Parts the Waters for Exxon

President Obama’s decision to have Secretary of Interior Ken Salazar open up vast new areas of federal waters to offshore oil drilling is no surprise. In his State of the Union Address, the President told us he thought we could develop a new clean

energy system based on offshore drilling, nuclear power and clean coal. Unfortunately that’s like advocating a healthy diet based on fast-food snacking, amphetamines and low-tar cigarettes.

Thirty years ago this debate was about energy versus marine pollution. Today it’s expanded to include a product liability issue.  This product used as directed, overheats your planet.  Also pursing offshore oil outside the context of marine spatial planning (see previous blue notes) undermines the promise of a unified national ocean policy the president advocated last June and his administration has been pursuing since then.

As a result of his actions on offshore drilling, should he now decide to sign an executive order establishing a new (really first) U.S. ocean policy it will look oddly incomplete, like the Massachusetts’ Ocean Plan where they work to coordinate all offshore activities except fishing because they found that issue too politically challenging.  Apparently energy politics has now trumped a truly unified national approach for managing our public seas.  For more of my thoughts on the President’s decision see my April 1 Los Angeles Times opinion piece, “Oil Drilling – A Nasty National Habit.”

Pass the Bluefin sushi, shark fin soup and polar bear paw ashtray. It’s all over except for the name change following the March 13-25 meeting of the U.N.’s Convention on the International Trade in Endangered Species (CITES) in Doha Qatar that included a Japanese Embassy reception serving highly endangered Bluefin Tuna. I wonder if it had been a conference on Human Trafficking would the embassy have staged a live sex show?  Unlike Germany, Japan never seriously accepted responsibility for its crimes during World War Two and I’m sure after it has helped facilitate the decimation of the seas its government will find a way to again deny responsibility for this latest crime, continuing to brand any criticism of its corporate fleets and seafood companies, “Japan Bashing.”

Along with mercury contaminated dolphins and whales the Japanese consume over 75 percent of the world’s (also mercury laden) Bluefin tuna as sushi and sashimi.  These large apex predator fish can sell for $10,000 each (one huge fish once fetched $175,000).  Given that kind of market incentive it’s no surprise that the existing stocks have plummeted.   The Eastern Atlantic and Mediterranean stock is nearing total collapse while the Western Atlantic stock, that includes U.S. Bluefin, has declined some 80

Still, the CITES meeting not only failed to enact a ban on trade in Bluefin Tuna meat (very expensive Japanese sushi), but also rejected any protection for seven species of highly endangered sharks (used in shark fin soup, a gelatinous $100 a bowl status symbol in China).  They also refused to protect rare pink and red corals (used for expensive jewelry) or even Polar Bear body parts (proof of the kill for “sports hunters”).

The U.N. has now become Japan’s accomplice in a shortsighted rush to end our last great hunter-gatherer activity on our last great wilderness commons.  As a result the end of wild fishing due to the extermination of marine wildlife has becomes increasingly likely.  We should probably start reworking some of our common sayings like, ‘there’s always another fish in the sea…until there’s not.’

In 1997 I joined a tour of Maine sponsored by the Institute for Journalism and Natural Resources (IJNR.org). Part of our on the go education involved visiting one of the last sardine canaries in America. With its vintage 1940s steam canning

machines and local women chopping heads and tails off small fish with blurring speed it felt like we’d been transported back through time to John Steinbeck’s cannery row.  The only difference was in the loading dock area where we   saw an attempt to update this first American fast food of the 1920s with market niched pallets full of jalapeño and barbecue flavored sardines.

Apparently it didn’t work as the New York Times now reports that Bumble Bee Foods is shutting down the nation’s last sardine cannery in Prospect Harbor Maine. 128 people will be laid off.  Although the company blames federal regulations on the herring catch, changing markets and tastes may have more to do with it. While employees are allowed to take home two cans a day most do not.  One of the soon to be canned workers said he takes home one a day but just to feed his cat.

Saved by the Sea

Isak Dinesen wrote that the cure for anything is salt water – sweat, tears or the sea. The 22-city –tour for my salty memoir ‘Saved by the Sea – A Love Story with Fish’ (out May 11 with St. Martin’s Press) keeps expanding. Added on since the last Notes are the Ocean First Divers shop in Boulder Colorado May 26 7PM and South Street Seaport Museum, NYC July 8 6:30 PM.

Please join Blue Frontier in organizing or attending one of my talks, writing a review for your magazine/newsletter (we’ll send you a review copy) and/or helping spread the word. For the full tour listing and more go to our Saved By the Sea page.

Author Peter Benchley was the keynote speaker at our first Blue Vision Summit in 2004 where we also presented our first awards to ocean heroes.  After Peter passed away, his wife Wendy agreed to let Blue Frontier title the next awards in his honor, which we did in 2009. Wendy is a grass roots environmental activist and she and Peter worked together for most of their 43 years of marriage on ocean conservation issues.

We have now decided to establish the Blue Frontier/Peter Benchley Awards as an annual marine conservation event. We see them as an opportunity to unify, inspire and recognize the varied people and players that make up the expanding ocean community: both to celebrate what we have accomplished and also the wonders of our blue ocean planet. 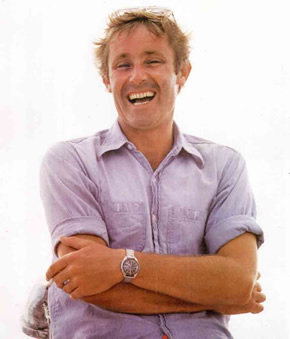 Marine artist Wyland has generously offered to design a unique awards statue exclusively for ‘the Benchleys.’ He, along with Ralph Nader, Sylvia Earle, Jim Toomey and the evening’s Master of Ceremonies Philippe Cousteau are among the more than three dozen dedicated members of the host committee working to make sure our June 25 Awards at the California Academy of Sciences in San Francisco’s Golden Gate Park creates the highest possible standard of recognition and inspiration for our emerging blue movement.

Click here for more on the Blue Frontier/Peter Benchley Awards.

Mermaids for the Sea

Blue Frontier’s Roz Savage, a slight blond Englishwoman with a sure pull and an iron will is preparing to launch on the third and final leg of her trans-Pacific row. As the first woman to row solo across the Pacific (in a 23-foot rowboat) she hopes to raise awareness of our blue planet at risk and what we can do to turn the tide.  She leaves from Tarawa Island in the south Pacific this spring and, if all works out, arrives in Australia three months later.

Roz came under Blue Frontier’s non-profit wing (fin?) after I was introduced to her by Margo Pellegrino who’d read Blue Frontier’s ‘50 Ways to Save the Ocean’ and came up with a 51st. A natural activist, athlete, organizer and mother of two small children (and a very supportive husband) Margo paddled a small outrigger canoe from Miami to Maine in 2007 raising money and awareness for Seaweed (marine grassroots) groups along the

way.  In 2009 she paddles from Florida to New Orleans to raise awareness of coastal pollution in the Gulf of Mexico.

This year Blue Frontier will be sponsoring Margo’s Pacific Paddle from Seattle to San Diego. She’d like to launch around the 4th of July. Still it’s not a done deal.  Safety and logistical costs for her several months long paddle could run $20,000 or more and with two months to go we’ve yet to raise the money.

If you’re interested in helping fund Margo’s Pacific paddle (or contributing to Roz’s ocean row) please contact us at info@bluefront.org.  If you can’t help with financial support but still want to help Margo we’re also looking for escort boats and paddlers off Washington, Oregon and parts of California as well as people to meet with her at haul out points along the way, also groups to help sponsor meetings, press conferences and nightly lodging for this cold-water mermaid from New Jersey.