It’s happened before but you wouldn’t know it reading the New York Times. On April 28 the Times wrote a “Gulf Spill” editorial defending continued offshore oil and gas exploration. Without questioning its source it wrote, “the federal Minerals Management Service says there have been no major spills — defined as 1,000 barrels or more — in the last 15 years, a period that includes Hurricane Katrina. In that context, the blowout — while tragic and destructive — can be seen as a freak occurrence.”

But when I was down in the Gulf covering Hurricane Katrina less than five years ago the Coast Guard reported that over eight million gallons of oil spilled in and around the Gulf, more than two thirds of an Exxon Valdez. Of course that wasn’t from the 180 rigs damaged, destroyed or set adrift like the Jack Up rig Ocean Warwick that I saw grounded in the surf on Dauphin Island Alabama. The MMS, parsing things very finely indeed, was only counting spills from active offshore rigs, not the pipelines, onshore tank farms, refineries and other infrastructure essential to offshore operations.

While traveling the Gulf between hurricanes Katrina and Rita I was reminded of war zones I’d previously covered, seeing fewer casualties (about 1,600 dead at the time) but far wider destruction. I was convinced that after the dead were all counted and mourned the massive oil spill would become a major media story, but it never did much to my surprise and that of some of the Coast Guard environmental Strike Team members I later interviewed for my book ‘Rescue Warriors.’ Nor have we heard much about the half million gallons of oil spilled in the Gulf last year when I flew with the Coasties into Hurricane Ike in Texas. Nor has there been any talk of the persistent leaks and pollution that comes from the rigs I’ve visited in the Gulf or of the spills that drift down the Mississippi from upriver refineries and barge traffic like the more than 60,000 gallon spill last year that hardly made the news outside southern Louisiana.

Of course for a disaster on the scale of what we’re now seeing you’d either have to go back to the 2009 blow-out in the Timor Sea off Australia that took months to get under control but was largely ignored by the U.S. media or, if you want a Gulf of 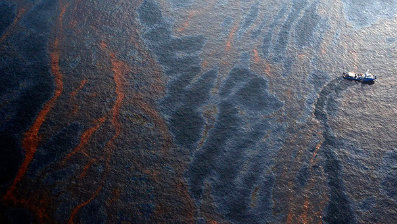 Mexico precedent you’d have to go back to 1979 when the Mexican-owned and U.S.-operated Ixtoc platform exploded, gushing 150 million gallons of oil in a fiery uncontrolled spill (several men died trying to control it) that lasted ten months and fouled the beaches of Texas, including the Los Padres National Seashore. Although some coastal communities were up in arms, the oil-dependent state government kept notably silent during that ongoing eco-disaster.

But of course the history of offshore oil and gas development has always seen industry moving rapidly into new frontier waters and then trying to develop “safer drilling technologies” only after disaster strikes whether your talking about the oil-slimed drilling piers and gushers of Summerland California in the late 19th century, the Union blow-out in Santa Barbara in 1969, the Deep Waters of the oil fouled Gulf today or the Arctic Ocean of tomorrow where the industry doesn’t even pretend to have technology capable of cleaning up a spill on or under sea ice.

I once asked the former Chief of the environmental division of the Mineral Management Service why the agency has never cancelled an oil lease sale based on its own oil-spill risk assessments. His response: “It’s hard to make or break something as big as a lease on one issue.”

The debate used to be between marine pollution and energy.

Today it’s no longer just about the loss of lives and livelihoods, destruction of America’s wetlands or America’s most productive coastline that we’re seeing. It’s also a product liability issue. This product, used as directed overheats our planet. Among other actions needed, it’s time to re-establish the moratorium on any new offshore drilling that was abolished in the waning days of the Bush Administration and also for the Obama administration to stop pretending we can drill our way to clean energy and start making a more serious commitment to offshore wind and wave energy, ocean thermal, algae-fuels and other carbon free possibilities. After all, no ecosystem has ever been destroyed by a wind spill.

Of course I’ve been on BP deepwater Rigs in the Gulf of Mexico and I mourn the loss of their people killed and injured along with the tens of thousands of other people now being affected. I respect the roughnecks and roustabouts I met on the drill decks working the hydraulic tongs and the derrick men above them leaning out from their monkey boards like trapeze artists to grasp the pipe tops and line them up with the rubber mud hoses dropping down from above and how they all worked together in a loud clattering steel-toed ballet to move those pipe strings down through thousands of feet of seawater and tens of thousands of feet of rock knowing the risks. Some wore T-shrits reading, “New Rig, New People, New Records.” They showed the same professional pride as America’s 19th-century whalers with their harpoons and try pots, who, by extracting leviathans’ living oil, lit and lubricated an earlier industrial age until they too passed into history. I’ve also seen enough oiled birds up close and personal. It’s all too awful and it’s time to move on.

Explorers, books and other updates

Before the blow out I was in D.C. where I got to participate in the 50th anniversary of the dive of the Bathysphere Trieste into the Challenger Deep the lowest point on our planet – two miles deeper than Everest is high. The final part of the three-day celebration of this historic dive to the bottom of the sea drew 500 people to Smithsonian’s Sant Ocean Hall to honor Don Walsh (USN Ret.) and the late Jacques Piccard who ventured with him to the bottom. Kudos to these blue heroes and to Blue Frontier friend Melanie Marks who helped organize the events. Don Walsh who was awarded the Navy’s Hubble Prize is also slated for a Blue Frontier/Peter Benchley Award June 25 at San Francisco’s Cal Academy of Sciences.

Speaking of explorers, BFC’s Roz Savage has launched from Tarawa and is rowing the third and final leg of her solo crossing of the Pacific (the first woman to do so) raising awareness of our ocean planet at risk. To read Roz’s blogs from the ocean go to www.rozsavage.com. Margo Pellegrino, who has already paddled Miami to Maine and the Gulf of Mexico, will be paddling the West Coast from Seattle to San Diego starting July 3, spreading word of the seaweed rebellion and meeting with local activists along the way. You can support both these Blue Frontier water-women by voting for them online in the Pepsi challenge where we hope to raise the funds needed to keep them going. Just click on the image below! You can vote every day. Or you can donate money to us directly.

And to inspire the next generation of ocean champions and adventurers (and anti-oil activists) there are a couple of new books for kids (and the young at heart). Blue Frontier’s seaweed fist logo was designed for us by the fabulous illustrator and artist Dawn E. Navarro who has now teamed up with famed author and Blue Ocean Institute founder Carl Safina to produce a charming book called The Great Whale Rescue about 11-year-old Nina Delmar (a real ‘Ocean Girl’) who joins some adults and helps free a humpback whale entangled in fishing gear.

Joel Harper is a newer author who along with illustrator Marg Spusta has created a story about two boy buddies, Isaac & James who trace runoff and waste from their neighborhood storm drains, “All the Way to the Ocean,” which is also the name of their kid-friendly story. According to Big Wave Surfer Laird Hamilton’s Foreword it’s, “a gentle reminder that, by working together, we can preserve these natural resources and insure they will be here for future generations…or I’ll pound you into jelly”… O.K. he didn’t write that last part, that’s just how I think of Laird Hamilton in the water, but who knows, maybe he’s a big-eyed kid at heart like Isaac or James.

Chris Palmer, long time documentary and IMAX producer of ocean and other wildlife films also has a new book with Sierra Club Books called ‘Shooting the Wild,’ a great insiders look at the challenges, both physical and ethical, of producing conservation films that can still make a difference.

My memoir ‘Saved by the Sea – A Love Story with Fish,’ also comes out May 11 along with the paperback of ‘Rescue Warriors – The U.S. Coast Guard, America’s Forgotten Heroes. To see the Rescue Warriors video go to www.bluefront.org A Saved video should be out shortly. I’ll be starting my book tour at the New England Aquarium 7Pm on the 11th. Legal Sea Foods will provide free and delicious clam chowder to anyone who comes to the opening event to hear me and to meet folks from the Conservation Law Foundation, Ocean River and other people who love the sea. Check out the full 25-city tour schedule on BFC’s website. Also if you want to order online try doing so on Amazon on May 10 and see if we can bump its standing for its release. 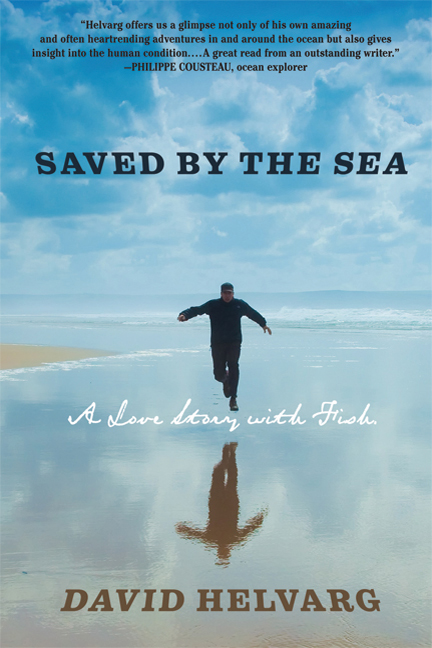