Blue Notes # 74 – Book touring, Celebrating what we can, Raging against the oil machine

The beginning of May BFC board member and Sherman’s Lagoon cartoonist Jim Toomey and I joined the Digital Ocean project at the UN’s Global Oceans Conference in Paris.  Along with participating in the D.O. panel on Social Networking tools for ocean conservation, we also did our dogfish and pony show on ’50 Ways to Save the Ocean’ at the opening reception.  While forums like this are critical for advancing proposals for improved global policy, science and regulation we still believe change will come from bottom up “seaweed” (marine grassroots) citizen efforts.  As the late marine scientist Ram Myers once explained, “There is no equivalent of a blue frontier organization in Europe or Southeast Asia and I think we really need to take the vision and expand it worldwide.”   His extended quote can be found in my new book.

Touring amidst an oily apocalypse 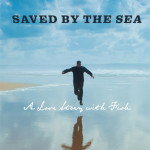 Talking about my new book and my love of the ocean is not hard.  Selling optimism while oil gushes into the Gulf of Mexico threatening our public seas and coastline is another matter.   In lieu of optimism I got some water time in Newport Rhode Island on a borrowed paddleboard thanks to Dan Pingaro of Sailors for the Sea. 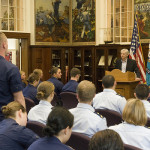 My book tour for ‘Saved by the Sea – A Love Story with Fish’ and the paperback of ‘Rescue Warriors – The U.S. Coast Guard, America’s Forgotten Heroes’ started the day of publication, May 11, at the New England Aquarium.  It was like a family reunion with Seaweed rebel friends including Rob Moir (Ocean River), CLF (Peter, Sean) author Deb Cramer, BU scientist Les Kaufman, a giant fiberglass penguin and complimentary chowder from Legal Sea Foods.  Next night I was in Mystic CT. with Gary Poe of Windows on Our Waters, Shaw Thatcher and centuries of history. The following day I spoke to 100 Coast Guard Cadets at their Academy in New London about why they shouldn’t trust oil companies among other topics.  Providence was a bust but boat and water time in Newport revived my spirits thanks to Dan and his wife Kim (also got to see the New York Yacht Club open its season).  In D.C. I spoke to folks at Politics & Prose bookstore (later broadcast on C-SPAN Book TV), NOAA and Public Citizen (thanks Rob, John). 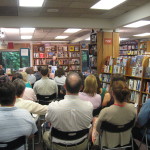 Good book Reviews have appeared in the San Francisco Chronicle, Honolulu Weekly, E magazine and elsewhere as I also keep writing about the oil crisis.  In Colorado I spoke to 50 folks at the environmentally responsible ‘Ocean First Divers’ shop 5,000 feet above the sea in Boulder and again the next night at the Tattered Cover bookshop in Denver with support from BFC Board member Vicki Nichols-Goldstein and, of course, my Aunt Renate.  Now it’s on to California, Oregon, Washington, Hawaii, etc.

Celebrating what we can

This is probably also a good time to celebrate what progress we have achieved.  On June 25 we’re holding the third annual Blue Frontier/ Peter Benchley Awards dinner in San Francisco (see www.bluefront.org for more information).  By then Blue Frontier’s awesome Roz Savage may have completed her trans-Pacific row (the first woman in history to do so) and Margo Pellegrino will be getting ready for her July 3 launch of her West Coast paddle from Seattle to San Diego, also to raise awareness of our oceans at risk and ’50 Ways to Save the Ocean.’

Meanwhile I’ll keep talking and writing about the people and salty places I love including those at greatest risk like Louisiana’s wetlands, sea turtles and pelicans as well as those who have crossed over the bar, including friends and loved ones who also loved the sea.

And Raging – Because it’s Personal

Nancy Ledansky loved the ocean. We spent years together diving, snorkeling, sailing and walking its shores.  When she died from breast cancer at the age of 43 we had a memorial service at her favorite beach on the Marin California headlands.

It was a windy day, feisty like the gal.  Although she used to say I never looked happier than when I was coming out of the water after getting beaten up by the waves, the ocean can also provide solace, remind us that we are part of something larger, even when large parts of our own soul have drifted away.

Five years later I returned to Rodeo Beach where oil had come ashore.  Behind the orange plastic fencing and pollution warning signs fifty-eight contract workers in yellow hazmat suits were removing oil stained boulders and scraping away the contaminated sand with a front loader called a Bobcat.  We’d seen real bobcats around there and I just hoped they didn’t find any dead seabirds to feed on as toxins tend to bio-accumulate up the food chain.  I’d come to the beach for a Coast Guard press conference before going out with them to do a damage assessment in parts of Richardson Bay where Nancy and I used to live, and it all felt like sacrilege.

This was during the 2007 Cosco Busan spill when a large container ship hit the San Francisco Bay Bridge spilling 53,500 gallons of toxic bunker fuel into the Bay, though the initial estimates by the Ship’s captain were far lower.  Three years later you can still find remnant oil in the wetlands near where I live and the Bay’s herring fishery has yet to recover.

According to conservative government estimates the BP Deepwater Horizon’s almost mile-deep wellhead has pumped 400 times a Cosco Busan spill worth of raw petroleum into the Gulf of Mexico so far since the rig exploded in April.

I remember after Hurricane Katrina spending an evening with a dozen displaced Cajun fishermen who were living in a carport below a three-story office building in Bell Chasse Louisiana.  They slept at night on dry patches of carpet in one of the water damaged law offices above.  They insisted on sharing the food and beer they had in big coolers with me and told me they weren’t sure they’d move their families back to Buras or Empire or other storm devastated towns I’d seen in Plaquemines Parrish where the world had turned upside down with boats on the land and houses in the water.  They would keep catching fish out of the Bayou however.  Of that they were certain.  Now their livelihoods are at risk from BP’s oil spill as are the wetlands that have sustained their people and culture since 1699 when Pierre Le Moyne landed on the Gulf Coast and reported an abundance of game, “and some rather good oysters.”

Oil, unlike some chemicals and vast amounts of plastic polymers we’re also dumping into the sea, will biodegrade over time.  In about 40 years much of the damage we’re

seeing as the BP spill begins to come ashore will naturally remediate.  Of course by then changing weather, ocean productivity and sea level rise linked to the burning of oil and coal will also have radically altered the 40 percent of America’s coastal wetlands now at immediate risk.

I’m deeply tired of wake up calls that don’t seem to wake us up to our intimate and essential connections to the everlasting sea.   If the rapid loss of Arctic sea ice linked to climate change won’t do it, if the industrial overfishing of the world’s oceans that threaten commercial extinction of edible fish by mid-century won’t do it, if the loss of over a third of the world’s coral reefs in the blink of an eye in which I’ve lived my life won’t, then I’m not sure an oil spill the size of Connecticut  spread throughout the water column and still growing will do it either.

What’s most frustrating is the solutions are known.  If you stop killing fish faster than they can reproduce, if you stop producing 100 million tons of single use plastic every year, if you don’t build and dump on salt marshes, mangroves and other protective coastal habitat, if you repair aging sewage systems and don’t use storm drains as toilets, if you move from oil and gas to new energy systems including offshore wind, waves and tides, you can turn the tide.  All it takes is our personal and political will.

After Nancy died I thought about returning to war reporting because I knew it was an effective antidote to depression.  Instead I founded a non-profit group dedicated to the ocean and seaweed (marine grassroots) organizing thinking that while we’ll probably always have wars we may not always have healthy and abundant seas – or coastal wetlands.  I don’t know if it’s too late.  All I know for certain is if we don’t try we lose and this salty blue world of ours is too beautiful, scary and sacred to lose.