BLUE NOTES # 76 – Benchley Ocean Awards, Roz lands, Margo launches and have we got a job for you

Forget the Nobel Prize, the Benchley Manta is the new standard for heroes and champions of the other 71 percent of our blue planet.

The third annual Blue Frontier Campaign/ Peter Benchley Ocean Awards was held Friday June 25 at the California Academy of Sciences museum in San Francisco.  It was an evening that was inspirational and sobering, momentous yet fun.

Over 200 ocean and coastal leaders participated in the glassy, crystalline main hall of this 21st century natural history museum to celebrate some of our heroes and role models even as we faced the ongoing BP oil disaster in the Gulf of Mexico. 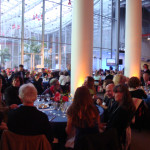 The winners talks buoyed the audience who’d been warmed up by world-class California wines and beer served during a highly sociable pre-dinner reception.

Before people sat down to their dinner (delicious fish-free meat and vegetarian entrees) we showed a video of the late author and ocean champ Peter Benchley followed by some still shots of the Gulf Disaster shot by Waterkeeper John Wathen during a flight I took with him and SouthWings pilot Tom Hutchings the week before (See Blue Notes #75). Cyn Sarthou then explained how bad things were but also how people in the Gulf are determined to carry on.

“I found it very moving that while the Gulf photographs were being shown this room full of 200 plus networking ocean champions was dead silent. This was a testimony to the “power of witness”– and to the deep empathy that our particular cohort has for the ocean,” noted Michael Stocker of Ocean Conservation Research.

Ocean Explorer Philippe Cousteau who’s been reporting from the Gulf for Discovery, ABC and CNN hosted the awards and, according to Rob Moir of Ocean Rivers Network, “…was a most masterful MC, One could

almost sense his grandfather in the room.”

Wendy Benchley and I handed ‘Manta Awards’ to each of the winners, who were all brief and eloquent (we’ll soon have a video of the evening posted).  Among their comments Director Louis Psihoyos called for “a media that helps create social movements,” while Jesse Ausubel wants to begin planning a “Day of silence” in the world ocean to highlight the problem of human-generated noise pollution.

The Awards, designed by famed marine artist Wyland are based on a story Wendy told of how Peter, she and others were filming in the Sea of Cortez in the 1980s when a Manta with a 20 foot wingspan came up under their boat.  It had one wing being torn by fishing line.  After they removed the line the Manta stayed with them for 3 days, letting them ride on its back, gliding through the clear waters like a thankful steed.

Each winner was introduced by a presenter including three past Benchley award recipients: Smithsonian’s Dr. Nancy Knowlton (science), Sea Studio’s Mark Shelley (media) and longtime offshore drilling opponent Richard Charter (Hero of the Seas).  Others included Maria Brown of the Gulf of the Farallones National Marine Sanctuary, Explorer Greg Stone of Conservation International, Meg Caldwell of the Center for Ocean Solutions and “J.” Nichols of Ocean Revolution who read the last line from my ‘Saved by the Sea’ memoir, “It’s not God’s green earth – it’s God’s blue marble,” before passing on some blue marbles. 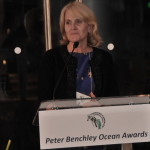 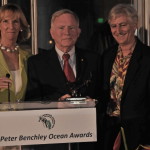 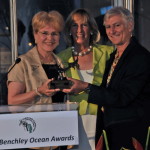 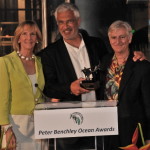 “The winners were all very deserving and the event was inspiring,” noted Seacology’s Duane Silverstein.

“It really was an amazing evening,” agreed Jenny Miller Garmendia of Project Aware.

By the end of the presentations things were rocking to the mellow sounds of the Kapalakiko Hawaiian Band and some rowdy good conversations.

e had a blast and we were all thrilled and inspired,” Lara Graham Truppelli of the Beach Chalet told us.

“The event was classy, emotional and powerfully rich,” agreed Stuart Ruddick, another of the 40 host committee members who along with Blue Frontier’s Viviana Jiménez, Organic Events, Wyland, Wendy, Chappellet Wines and the many event Sponsors volunteers have now established the Benchley Ocean Awards as something the entire marine community can take pride in.

As a fundraiser it wasn’t quite as awesome but it’s never too late to contribute to the Blue Frontier Campaign at www.bluefront.org.  Monies raised will be used for the next Blue Vision Summit in response to the Gulf Disaster.

And of course, like a shark, Blue Frontier always has to keep moving which is why one of our Benchley guests was Blue Frontier’s own Margo Pellegrino who, along with her land support driver June Barnard was on her way to the Seattle launch of her Pacific Coast Paddle, another project of Blue Frontier.

Passing the oar, paddle, whatever to Margo

For those who’ve wondered (see Blue Notes #74), on Friday June 4 Blue Frontier’s Roz Savage completed the third and final leg of her Transpacific voyage landing in Madang Papua New Guinea to a tumultuous welcome and thus becoming the first woman ever to row solo across the Pacific (in the cause of ocean and climate protection no less).

In a surprisingly fast month and a half row (and current carry) from Tarawa she came within a hairs breath (OK, a continent) of her initial planned landfall in Australia but in the process won the hearts and soul of the newer nation of PNG and also avoided bumping into the Solomon Islands.  With lots of supplies left over I for one am not surprised she’s now considering rowing the Indian Ocean which I believe would get her close to becoming the first person to circumnavigate the world in a rowboat.  As we’ve long said, Roz Rocks and rows!

But we can’t stop there. Blue Frontier believes a woman’s place is at sea (or wherever else she wants to be).

On July 3rd Blue Frontier ocean explorer Margo Pellegrino began her next paddling journey down the left coast via outrigger canoe. More than 100 people gathered on a chilly morning at Waterway 18 on Lake Union in Seattle to wish her a safe and successful journey and support her efforts to call attention to the need for healthy oceans. “An effective public education campaign is critical for advancing public policy”, she explained.

During the launch, Margo and June Barnard – her “land crew” who is driving down the coast in a donated Ford van – were joined by members of the Pacific Northwest Outrigger Racing Canoe Association (PNWORCA) and the Seattle Outrigger Canoe Club (SOCC), Margo’s family, various media, BFC’s Viviana Jiménez and others. As Margo herself pointed out “it was the warmest launch, on the coldest day of any of my paddling expeditions”.

In outrigger fashion, the launch ceremony included the traditional Hawaiian Ho’okupu, Hawaiian chanting along with words from all organizations represented and Margo herself. She presented Lance Mamiya – a long-time supporter and one of Margo’s paddling teachers –  with a blue glass marble from New Jersey, pointing out that from space the earth resembles a blue marble.  If we mess up our ocean, which provides the source of life, no one is going to be able to do an emergency water change, as can be done in an aquarium.  The blue marble is just a simple reminder of this and is meant to be passed on and on.  (Learn more at BlueMarbles.org)

After, some 60 paddlers took off to accompany Margo through the union locks into Elliot Bay, in an evocative display of unity and synchronization with the sole purpose of giving voice to the world’s ocean.

A natural activist, athlete, organizer and mother of two small children (and wife of a very supportive husband, Carl) Margo is no stranger to long distance paddling. In 2007, she paddled a small outrigger canoe from Miami to Maine raising money and awareness for Seaweed (marine grassroots) groups along the way. In 2009 she paddled from Florida to New Orleans to raise awareness of coastal pollution in the Gulf of Mexico, now the center of the worst environmental disaster in U.S. history.

Margo’s Seattle to San Diego paddle should conclude in late August. During the two months of her journey, she will paddle approximately 1,500 miles making some 60 stops along the West Coast.

Margo decided to launch despite a lack of funding. If you’re interested in helping fund Margo’s Pacific paddle please donate on our secure website by clicking here. If you can’t help with financial support, we’re also looking for people to provide boat escorts, meet with her at haul out points along the way, and also groups to help sponsor meetings, press conferences and nightly lodging for this cold-water mermaid from New Jersey.

You can also track Margo’s journey online at www.seattle2sandiego.com.

Be the Change – At Blue Frontier

Blue Frontier is looking for a new Associate Director to run our Washington D.C. operations including programs, administration, policy, finance and development.  For a full description of the job and how to contact us go here.