Blue Notes #78 – Count on the Gulf, Paddle for the Seas, work for them too

They’ve finally cemented up BP’s runaway well (from above with a second relief well plug still to seal it from below).  Unfortunately this comes after 220 million gallons of oil slimed the Gulf of Mexico.  So what’s the effect of a spill 20 times the size of the Exxon Valdez?  Apparently not much if you believe the government’s estimates. 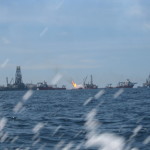 The Deepwater Horizon Oil Budget put out by the Department of Interior and National Oceanographic and Atmospheric Administration says one quarter of the total oil naturally evaporated or dissolved.  Having spent time in the heat and oil of the Gulf in June and July, and given the volatile compounds in the light crude that was released I don’t have a hard time believing this.  Score one for air pollution. They claim 25 percent was burned, skimmed or recovered from the wellhead.  Again, having seen the surface burns and the Q-4000 rig flaming off 6,000 barrels a day in July, creating a black column of oily smoke, skipping the middle men (cars and trucks) and putting sooty carbon dioxide right into our already overheated atmosphere, I can almost believe this figure although it would represent the most successful mechanical recovery of spilled oil in history and I know from being there a lot of oily water was counted as recovered oil.

The ‘Budget’ also claims 24 percent of the oil was dispersed into the water (either naturally or through millions of gallons of chemical dispersants being sprayed on the surface and pumped down to the wellhead). They claim 26% remains on or just below the surface or has been collected (or not collected) from the shoreline as oily muck and tar balls.  This ‘residual oil is being naturally degraded they reassure us.   The oil budget, like the federal budget, seems to be running on a deficit however. 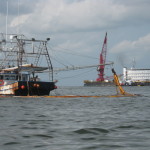 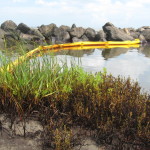 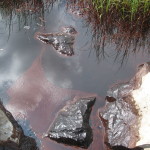 Two problems; one, the 24 percent they say is dispersed into the water column has not gone away any more than the 26 percent on or just below the surface (also staining wetlands and beaches).  In addition the massive amounts of methane gas released into the water (remember, they’re drilling for oil and gas), though not counted in the budget, is also impacting the Gulf ecosystem from deep ocean bottom habitat to warm surface waters, along with every living thing therein. 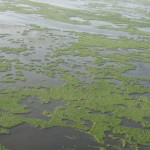 So the good news is maybe half the oil has been burned off, skimmed and dumped, evaporated in the heat, eaten by bacteria in an anaerobic process that also sucks oxygen out of the water or otherwise biodegraded.  That’s good news in the sense that amputation is better news than gangrene.  We still, conservatively, have half the oil and gas mixing with saltwater, algae and resident wildlife, though harder to spot and corral thanks to chemical dispersants.

Three years ago, in November 2007, we had the Cosco Busan bunker fuel spill in my home waters of San Francisco Bay.  That’s one two thousandth as much fuel as the government estimates oil still left in the Gulf.  Subsequent NOAA studies (that were not made public until San Francisco Weekly reporter Peter Jamison did an expose in March of this year) found that herring embryos exposed to the type of oil used in the bunker fuel were fatally deformed.  For the last three years the Bay’s annual herring return has disappeared and the most famous urban fishery left in America has collapsed.  Crab counts have also fallen precipitously in the last few years with the spill being viewed as a likely reason. 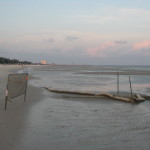 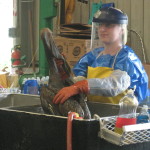 The persistence of oil released into the marine and coastal environment can also be seen in Alaska by digging eighteen inches below the surface along the Prince William shoreline where oil can still be found just deep enough to maintain its toxicity.  Sea otters digging for clams have been spotted bringing up welling pockets of oil.

BP has already begun cutting back on its ‘clean up’ effort in the Gulf and talking up the idea of returning to drill that part of the Mississippi Canyon deep oil reservoir they didn’t let explode into the water.   So what is the definition of clean other than the slate BP would like to write its story on?

In June Greenpeace biologist John Hocevar took me onto a beach near Grande Isle Louisiana that had been cleaned two days earlier.  You could still see small medallions of copper oil spots on the sand but it looked pretty clean compared to a sludgy nearby wetland.  “Some of the oil has also sunk into the sand,” he told me.  Wanting to check for myself I took a sandy stick and dug a hole about two feet down.  Sure enough there were more penny-sized medallions of oil deeper down in the sand.  I tossed the stick and vigorously brushed my hands together but the sand stuck to my palms.  I rubbed them on my jeans and light brown oil stained my jeans and hands where the sand rubbed off.  Multiply that a million times and you begin to understand what persistent pollution means. 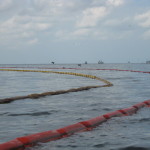 It will take years of study to determine the impacts of the BP disaster on the Gulf of Mexico’s ecosystem.  My fear is that if Florida’s tourist beaches aren’t heavily oiled (as they appear not to be for now), and if the mainstream media no longer feels it has to “feed the beast,” (as a CNN producer put it) then the long term impacts of the spill on the Gulf’s habitat and marine wildlife and those whose livelihoods depend on them may be ignored and forgotten. Consider how other long-term and larger disasters degrading our ocean commons are being ignored.  These include plastic, urban and agricultural runoff pollution, climate linked sea-level rise, acidification and arctic melting, loss of habitat (including Louisiana’s shredding wetlands) and industrial overfishing for the global seafood market.

Maybe if Snooki and the Situation from ‘Jersey Shore’ were as oil covered as a flock of Louisiana Pelicans or Lindsey Lohan’s flesh as saturated with leaked methane as it’s been with alcohol or BP’s Bob Dudley admitted he was a True Blood vampire we’d be able to retain public interest in this unfinished disaster.  Still, for people of the Gulf and beyond who understand what it means to have your life linked to a living sea, BP’s impacts won’t be going away anytime soon, or probably anytime in our lifetimes. 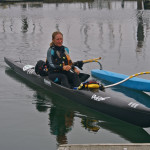 Blue Frontier’s own Jersey mermaid Margo Pellegrino has made it past the shores of Washington and Oregon (with a few bumps and bruises along the way, recently surfing waves bigger than her big, lance-like outrigger) and entered California’s seas on Saturday August 7th.  This is part of her Seattle to San Diego paddle for the Pacific (and other clean seas).   She has an expected Bay Area ETA of around Saturday August 21 and we’re hoping to have a big welcome at Crissy Field at San Francisco’s Presidio.  A few days later she’ll be arriving in Monterey during the Blue Film Festival that celebrates ocean film and entertainment and we hope to have another good greeting for her there (sea otter escorts, 21-bark sea lion salute, pelican fly-by, etc.) Speaking of mermaids, there’s also a planned celebration for Sylvia Earle’s 75th birthday at the film fest.

50 Ways to win a film prize

And speaking of Blue Film Festivals…The 2010 Gray’s Reef Ocean Film Festival in Savannah this coming September has selected “Students Saving the Ocean” for their Judges’ Best Pick film.  ‘Students’ follows a group of San Francisco Bay Area students learning about the bay and ocean and is based on our Blue Frontier book, ’50 Ways to Save the Ocean.’   It was produced by the Digital Ocean project’s Dave Toole and directed by Satva Leung.

For more information on the book or the movie contact: info@bluefront.org or dave@outhink.com 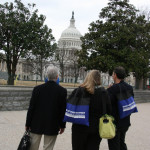 Blue Frontier’s Associate Director Viviana Jiménez is off to Oxford for an advanced degree this fall.  D.C. of course has had many advanced degrees all summer, 92, 98, 101… Still, it’s not only hot but exciting to work in D.C. on Ocean policy and movement building (like our T-shirt says, ‘Blue is the New Green’).  For information on the Associate Director position opening with Blue Frontier please go to our website www.bluefront.org and if interested, send a cover letter and resume to info@bluefront.org 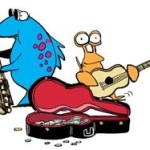 And of course feel free to go to our site and make a donation– a fin or more – to help continue the work of Blue Frontier from sea to shining sea – and sometimes oil-stained shores.  We go where we’re needed and do what we can.