ly and August). Record temperatures, massive forest fires in Russia, catastrophic flooding in Pakistan and other extreme weather events along with the melting Arctic convinced even climate skeptic Bjorn

Lomborg to reverse course and write a new book calling for a $100 billion a year commitment to finding a solution (now that you know, you don’t have to buy the book).  In addition there has been another oil rig explosion and fire in the Gulf of Mexico at a Mariner Energy platform.  Luckily, no one was killed and no massive spill occurred this time, unlike with BP’s Deepwater Horizon. Still it seems like we ought to be close to recognizing that offshore oil and gas drilling is, to paraphrase friend of Blue Frontier Ralph Nader, unsafe at any depth.  As cinematic as all these fires, explosions, oil eruptions and at sea rescues (of both people and pelicans) are, I am surprised I didn’t see any oil disaster themed films at this year’s Blue.

In its second year, and first in Monterey California, the Blue Ocean Film Festival drew hundreds of ocean filmmakers, sea fans, divers, conservationists and underwater photographers along with others and otters, sometimes packed like sardines at the Golden State Theatre, the famous aquarium and other venues.  It went on for five days with spectacular views on and off screen, mild bay temperatures and hot off the editing-bay films.  At one point I cut out of the screening of the film ‘180 South’ about the spectacular coast of Patagonia to show a friend the amazing shoreline of Pacific Grove.

Along with seminars on ocean issues and business practicalities (like Chris Palmer’s workshop on Fundraising for your film) there were technical dive opportunities and ocean-themed ceremonies.  In addition to the Making Waves Awards given Jean-Michel, Fabien and Celine Cousteau, Carl Safina was given the Sylvia Earle Award for conservation. Rumor is that Sylvia’s now up for a Safina award.  Then there were all the great opportunities for social networking, though if you missed the GOOGLE party you could check it out on YouTube.

If my late photographer friends John Hoagland and Richard Cross gave their lives to show us another face of humanity at war, this festival honored those who are today taking risks to give voice to our threatened oceans.  That included a memorial tribute to underwater shooter Wes Skiles who died earlier this summer in a diving accident while on an expedition off the east coast of Florida.

The more than 100 films selected for the festival provided a needed balance between wonder and warning, between films that highlighted the otherworldly beauty of the seas like Disney’s ‘Oceans’ or ‘The

Ultimate Wave Tahiti 3D’ with those that warned of the cascading disasters threatening them. These included ‘Acid Test,’ and ‘The Krill is Gone,’ whose cast is not only animated by the threat of climate change, but is also animated.  The Jury Award went to ‘Bag It’ a movie about a guy who tries to go cold turkey on his use of plastic.  But it didn’t win because of its message, rather because, “it was a film that really moved people,” according to Debbie Kinder.  Festival founders Debbie and Charlie Kinder and festival Director Arlene Burns worked like jack tar sailors to make Blue the success it was.  I suspect any white cloud clipper captain, or the Calypso’s Captain for that matter, would have been proud to call them crew.

With the passing of Labor Day and the end of a too hot summer the question everyone, or at least some people between New York and Delaware Bay, are asking is – What does it take to be a real Jersey Girl?  MTV’s runaway hit show ‘Jersey Shore’ which has redefined reality TV (as even more scripted drunkenness and hook ups) has given us this generation’s Gidget in the form of the diminutive 22-year-old Nicole “Snooki” Polizzi.

While I haven’t personally met Snooki, I do know a real housewife of New Jersey, 43-year old Medford Lakes mother of two Margo Pellegrino.  Margo has spent most of the summer away from her husband Carl, 5-year old daughter Julia and 8-year old son Billy paddling a fast light outrigger canoe down the Pacific Coast from Seattle to San Diego (expecting to arrive for the local Surfrider’s Paddle Out on Sept. 12). Full disclosure – Margo’s doing this extreme paddle as a project of Blue Frontier of which I, fuhgeddaboutit, happen to be president.

So, while I have no more biases than any cable news network named after a small carnivorous mammal, what we probably need to determine the winner of this True Jersey Girl contest are some wachamacallit?  Metrics – dates and attributes that will allow you the reader to compare and make your own judgment.

In 2007 Margo, partly inspired by my book ‘50 Ways to Save the Ocean’ paddled an outrigger canoe from Miami Florida to Camden Maine to raise awareness of ocean issues and citizen groups fighting to make a difference.

In 2007  Snooki, a year out of high school, allegedly took some nude photos of herself on Valentines Day and now wishes she hadn’t.

In 2009  Margo paddled from Miami to New Orleans to raise awareness of oil, chemical, agricultural and industrial pollution in the Gulf of Mexico.   Among her supporters was the Gulf Restoration Network, now one of the frontline citizen groups responding to the BP blowout disaster.

In 2009 Snooki scored huge when she was chosen for the opening season cast of “Shores” having earlier made an appearance on  “Is She Really Going Out with Him,” the story of “sweet girls” and the “douchebags” they date.

Sooki – Got punched in the face by a drunk guy in a New Jersey bar.  Gedoudahere! You missed that episode?

Margo – “This coastal paddling journey is my way to call attention to the need for healthy oceans.”

3) How others see you

Margo – “She’s a great example of someone with passion and drive and commitment, doing what she can do.  She’s a small piece of the fabric of what needs to be done to save the ocean.  She’s doing it for her children.”  – Husband Carl to the Philadelphia Inquirer.

Snooki – “She’s a great girl and anyone would be happy to date her.  I’m the lucky one.” – New boyfriend Jeff Miranda to Radaronline.

An aside – He seems way better than her ex Emilio Maella who, according to TMZ, says he regrets they didn’t make a sex tape.

Margo – “I love all the microbreweries here on the West Coast.  All the beers, especially the IPAs, are so much better than what you get at home (in New Jersey).”

So as summer simmers to an end and the tourists leave the shore the Real Jersey Girl Award has to go to – badda bing..badda boom – the actual legal resident of New Jersey, Margo Pellegrino.

The 3rd Blue Vision Summit is beginning to take shape, set for this spring in Washington D.C. Bringing together hundreds of ocean and coastal leaders from around the nation and our blue planet its major themes are likely to 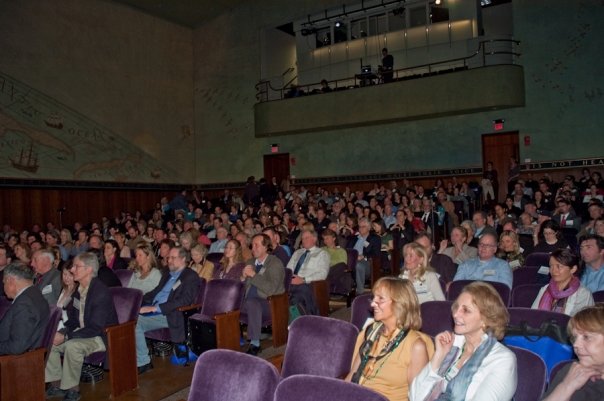 include – Restoring the Gulf of Mexico

after the BP oil disaster, Expanding U.S. Marine Policy and making it work and addressing the impacts of climate change on the global ocean.

The last Blue Vision Summit, sponsored by more than 20 ocean and coastal organizations in March 2009, included over 400 ocean leaders meeting over 4 days with the new administration and Congress.

West Coast and D.C. planning meetings for this next stage Summit will take place in October and November with specific times and places soon to be announced.

Also check out the new report we’ve just posted on our homepage on what Blue Frontier has done over the last 18 months and what we hope to do in the future: ‘Moving into the Future 2010-2011 and Beyond.’ If you like what you read please consider making a donation to help us realize a better future for the seas and all those who depend on them.