In this issue
Saving the other 71 percent
Oceans Awash: 5 wins/5 Losses in 2010
Speaking of Extinction
Summit: what’s coming up
Saving the Ocean International
We’re Hiring

Saving the other 71 percent
In the last half century (the blink of an eye in which I’ve lived my life), the ocean—the crucible of life on our blue marble planet—has been devastated by a series of cascading disasters. These include industrial overfishing for the global seafood market that has seen 90 percent of the large open ocean fish killed off, as well as the possible extinction of edible species of fish by mid-century.

Oil, chemical, and plastic pollution of the seas has also become ubiquitous. Add to this the effects of fossil-fuel-fired climate change, and it’s understandable why some leading marine scientists have begun to despair.

Personally, I’m more frustrated than despairing because we know what the solutions are (I wrote a whole book of them, 50 Ways to Save the Ocean). Fish tend to grow back once you stop killing them faster than they can reproduce. We don’t need to produce 100 million metric tons of single-use plastic a year if much of that ends up in the ocean killing seabirds and turtles. Protecting coastal wetlands, reefs, and mangroves also protects human populations from storm impacts while providing livelihoods in fishing, tourism, and other industries (plus, they sequester carbon). Coal and oil are the leading energy systems of the sixteenth and nineteenth centuries. We’re now in the twenty-first. And it’s worth noting that no Louisiana bayou was ever destroyed by a wind spill or turbine-turning tide.

It’s unclear if we can establish the rule of law at sea in ways that can rein in the saltwater special interests such as BP and Mitsubishi (a major buyer of endangered bluefin tuna). All we can know for certain is that if we don’t try, we lose. And this salty blue marble planet of ours is too wild, fun, and sacred to lose.

For my full rant, I mean article, see the December/January issue of The Progressive magazine. Also, below, see my analysis of 2010 wins and losses for the ocean excerpted from my December 27, 2010 Huffington Post Blog. Top

distribution and abundance of life in the oceans” was conducted between 2000 and 2010. It found there are still new and amazing critters and habitats out there to protect.
* New Shark Protection Laws: First Hawaii banned the trade in shark fin that endangers a 600 million year old keystone predator of the sea in order to sell soup to rich folks in Asia. Then, just before recessing, our Lame Duck Congress lent a hand (or wing) and passed a bill that pretty much prevents any new shark finning in U.S. waters.
* New Ocean Wilderness Parks created: California established new no-take protected areas off southern California in December, part of a network of marine wilderness parks under its Marine Life Protection Act. In doing so California joins a number of nations including the U.S., Britain, Kiribati and Australia who have set aside vast areas across the Pacific, Indian, Atlantic and Southern oceans to protect and restore the seas natural bounty.
* Some offshore drilling protection: In the wake of the BP disaster, the Obama administration walked back the dogfish saying there will be no new drilling off the Atlantic seaboard or in the eastern Gulf of Mexico. While that’s an advance from the President’s pre-Gulf blow out proposal to open extensive U.S. waters to oil development, it’s still less than what was protected under the drilling moratorium in effect for a quarter century.

LOSSES
* BP Disaster: Flying over the Gulf of Mexico in June seeing oil spills out to the horizon and 100 dolphins and a whale trapped and 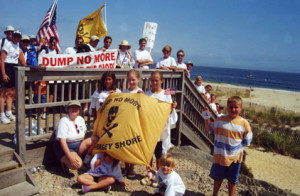 dying in the slicks it was hard to believe this would not have profound impacts on U.S. energy policy, but it doesn’t seem to have.
* Bluefin condemned to extinction: Japan served endangered Bluefin Tuna sushi at the Convention on Endangered Species meeting in March where it blocked attempts to protect this top ocean predator whose population is collapsing, with 80 percent of the biomass fished out since the 1970s. In the wake of the CITES failure, the International Commission for the Conservation of Atlantic Tunas was expected to take bold action but also failed to act.
* New study says nowhere left to fish: A new science study by the University of British Columbia and National Geographic found that we’re now overfishing everywhere from the deep ocean to Antarctica, stripping the last previously unfished populations of marine wildlife out of our seas.
* Plastic waste now found everywhere in ocean: The 2010 ‘5 Gyres‘ expedition launched by the Algalita Marine Research Foundation is finding plastic refuse and debris in all ocean gyres or whirlpool currents, not just the Pacific’s.
* Climate failures mean rough seas ahead: The failure of the U.N.’s 2009 Climate Meeting in Copenhagen and token progress in Cancun this year on addressing fossil-fuel fired climate change means continued trouble for the world ocean. Top 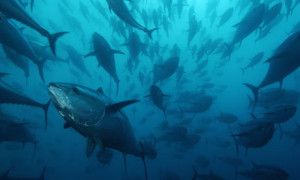 A giant bluefin tuna fetched a record price of nearly $396,000, in Tokyo in the first auction of the New Year at the Tsukiji fish market in Tokyo. That translated to $526 per pound for the huge fish, more than the price of hummingbird tongues, cat whiskers or panda paws.

Japan is the world’s biggest consumer of seafood, with Japanese eating 80 percent of the Atlantic and Pacific bluefins caught (and responsible for the collapse of 80 percent of the specie’s biomass since the 1970s – See Blue Notes #82). Is it time to revisit a Mitsubishi boycott like the one Rainforest Action Network successfully carried out against their rainforest logging? Whoever mentioned a boycott plan around Bluefin tuna please reconnect with us at info@bluefront.org. After all, the 1990 Earth Island institute Tuna Boycott resulted in dolphin-safe tuna. Maybe its time we start organizing an effort to create tuna-safe humans. Top 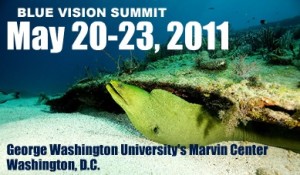 Summit: what’s coming up.
This spring’s Blue Vision Summit (BVS 3) is adding to its potential day by day. Recent additions include Celebrity Chef and seafood maven Barton Seaver (watch for his upcoming book, For Cod and Country). Along with Ocean Champion’s Dave Wilmott leading a workshop on Ocean Funding on Capitol Hill, Filmmaker/educator Chris Palmer will lead a workshop on how your blue group can do more effective fundraising (check out his new book Shooting the Wild). And of course many of our usual heroes: Sylvia Earle, Wyland, Philippe Cousteau, Carl Safina (new book The View from Lazy Point), Dr. Nancy Knowlton (new book Citizens of the Sea), and many others will be there. My book Saved by the Sea will celebrate its first birthday at the Summit. Along with celebrations of the sea in film, art and music on BVS3’s opening night we’ll also have an authors’ book signing. Registration opens January 21. Mark your calendars! Top

Saving the Ocean International
Students Saving the Ocean, the film developed in collaboration with San Francisco area high school students and inspired by 50 Ways to Save the Ocean, is going international. NOAA has selected the film to play in their Oceans Today network, which has 25 kiosks worldwide. Thanks to our partners at Digital Ocean for helping make this happen! Read the full story. Top

We’re Hiring
Blue Frontier Campaign is looking for a few good interns for spring 2011. Check out the job descriptions here and feel free to pass them along to anyone you think might be interested. Top