and other blue news

In this Issue
Fish Don’t Revolt
Doc’s Deadly Remedy
The Joke About Salmon (and the State of the Union)
Some Good News
Meet our newest supporters
BVS3 Registration
Like us?

Ten years ago I led a workshop for regional (mainly Arab) journalists on environmental reporting in Tunisia. At night we drank sweet tea and smoked water pipes in Carthage and discussed if a democratic revolution is a requisite for environmental reform and, if so, could it take place in that part of the world. The answer is not in yet, but it’s looking hopeful thanks to the sacrifice of Tunisia’s youth and the ongoing struggle of the Egyptian people. Meanwhile there is growing concern over how the depletion of our natural resources including wild fish could also be a driver for global instability. Somalia’s pirates, it’s worth noting, started out as local fishermen who began seizing foreign trawlers that were depleting their waters. Top

Upton Sinclair once said, “It is difficult to get a man to understand something when his salary depends on his not understanding it.”

The new chair of the House Natural Resources Committee, Representative Doc Hastings (WA), doesn’t understand President Obama’s new ocean policy, claiming it is “an irrational zoning process” that “will harm the economy and cost jobs”. In 2010, his largest campaign contributor was the oil & gas industry. 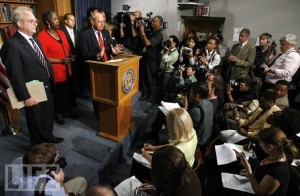 Hastings says that a national ocean policy “will place ‘off-limits’ signs on huge portions of our oceans and coasts, seriously curtailing…all types of energy development”. To date the largest marine protected area “off-limits” to extractive uses is in the remote Northwest Hawaiian Islands and was established under an executive order issued by President George W. Bush in 2006.

Last July President Obama established a U.S. ocean policy by Executive Order shortly after the BP wellhead was capped in the Gulf of Mexico. It is based on the recommendations of two blue ribbon ocean panels (one appointed by President Bush, the other led by Leon Panetta) that reported in 2003 and 2004. There followed a long process of public hearings by an ocean-policy taskforce attended by thousands of citizen stakeholders (seaweed rebels also staged ‘Wear Blue for the Ocean Day’ rallies in more than a dozen cities). The policy’s inelegantly titled operating principle is called ecosystem-based coastal and marine spatial planning (CMSP). 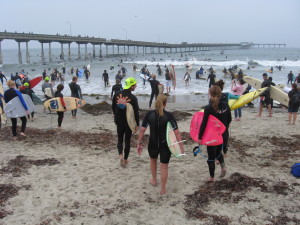 The CMSP idea is to take a more unified and mapped out approach to ocean management that, had it been applied earlier, would have required the regulatory oversight and full impact analysis that might have prevented the BP deepwater drilling disaster.

Under the nation’s present system, America’s public seas are run by 24 different federal agencies operating under 140 laws with little or no coordination among them. The result has been decades of overfishing, pollution, coastal sprawl and beach closures.

Retired Admiral Thad Allen, who was deeply involved in the ocean policy task force as Commandant of the Coast Guard (before taking charge of federal response to the BP blowout), defines marine spatial planning as, “basically taking the notion of urban planning and putting it into the water column.”

Ultimately, if done correctly, it could involve cleaning up our coastal watersheds, greening our ports and designating offshore waters not only for shipping but also energy, fishing, national defense, wildlife and wilderness in a dynamic and regionally responsive manner. (Massachusetts has presently taken the lead 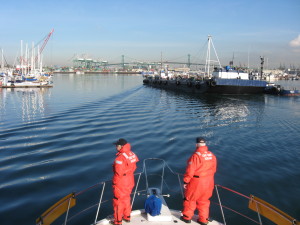 What is clear is that most Americans today have not even begun to consider the challenges required to protect our seas whether through marine spatial planning or by use of other conservation and management tools. Yet, our ocean activities represent a larger part of our economy than agriculture in terms of jobs and money generated. Literally billions of dollars and million of jobs in transportation, trade, recreation and coastal real estate depend on our ability to establish effective policies that promote healthy, abundant and secure waters.

Doc Hastings has hinted he may hold hearings on the President’s ocean policy and congressional hearings may in fact make sense. We need a wider dialogue about how to manage our last great commons and frontier in ways that continue to benefit us in the present while preserving the seas natural resiliency for future generations.

What we do not need are partisan-based attacks or a pre-determined demand for unrestricted access to our public seas based on the agenda of a single saltwater special interest such as the oil and gas industry. Top

The Joke About Salmon (and the State of the Union)

President Obama got a laugh line in his State of the Union when he said, “The Interior Department is in charge of salmon while they’re in freshwater, but the Commerce Department handles them when they’re in saltwater.  I hear it gets even more complicated once they’re smoked.”

How about this one:  “What does a salmon say when it hits its head?”

The truth the President was trying to get at is there’s lots of redundancy   involved in government work (although he was technically wrong – NOAA – Commerce – handles salmon in both fresh and saltwater). It’s not bureaucracy but competing interests that has led to the decline of wild salmon in the Pacific Northwest. The best available science has long indicated that taking down 9 marginally productive dams on the Snake River would restore the once vast Columbia River salmon runs in ways that little else is likely to.  Back in the 2000 election season, George W. Bush campaigned in defense of the dams and Northwest energy industry while Al Gore punted. Today the Obama administration continues to punt. But in some ways that may not matter.

By not addressing fossil-fuel fired climate change in his State of the Union following the hottest year in recorded history (2010 actually tied 2005 for this distinction) and by letting his Climate chief Carol Browner leave the White House with no indication of a replacement, he may be condemning salmon, corals and other temperature sensitive species to extinction whether or not we remove those dams. Top

I participated in a panel “Beyond the Obituaries” at this year’s National Council for Science and the Environment’s conference in D.C. where the overall theme wa

s “Changing Oceans”. Organized by Peter Benchley Ocean Award winner Dr. Nancy Knowlton of the Smithsonian Institution, our panel on marine ecosystem success stories included Dr. Steve Palumbi of Stanford’s Hopkins Marine Lab talking about the rebirth of Monterey Bay (the subject of his new book), Kathryn Mengerink of the Environmental Law Institute talking about advances in marine policy and law, and Professor Rom Lipcius of the Virginia Institute of Marine Science talking about efforts that are leading to the recovery of blue crabs and oysters in Chesapeake Bay. Nancy has explained that, biologically, the most important lessons for recovery concern scale. The larger and longer lasting the protections the more effective they tend to be.  That’s why the 2011 Benchley Ocean Awards will include a “Solutions” category whose recipient will be someone who’s been involved in a very large-scale effort.

In other good news, the Commonwealth of the Northern Marianas Islands has joined Hawaii in banning the possession and sale of shark fins. As goes CNMI, so may go Guam. Still, I wonder if Hawaii can do this why not California? People are now working on that next step. Other good news from the Golden State is that Santa Monica has now joined a list of other California cities banning single use plastic bags since the plastics industry lobby in Sacramento defeated a statewide ban on them last year. Top 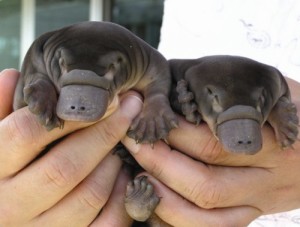 I’ve named them Bluey and Benchley in honor of the fact that when you register for the Blue Vision Summit this spring you also get free admission to the 4th annual Peter Benchley Ocean Awards. Mostly though this is a shameless pretext to show you a terminally cute image of two baby platypuses. Did I mention that they don’t get put back into the water till we’ve gotten twenty-five new registrations? Top

BVS3 Update
Registration is open for Blue Vision Summit 3. Check out the website for details and to register. Top

Like us?
If you like Blue Notes, feel free to reprint or forward them and/or donate to Blue Frontier Campaign. And remember, Blue is the new Green. Top

We’re Hiring
Blue Frontier Campaign is looking for a few good interns for spring 2011. Check out the job descriptions here and feel free to pass them along to anyone you think might be interested. Top