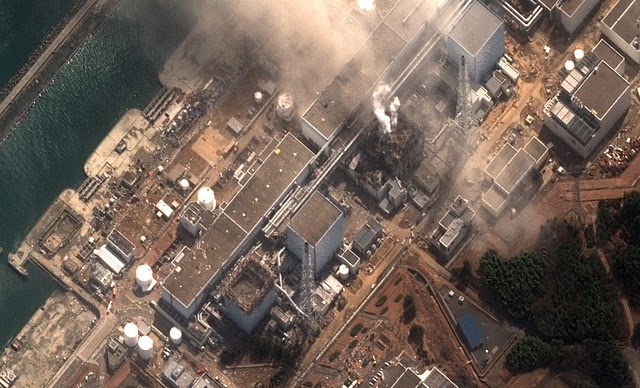 Radiation leaking into the Pacific from Japan’s damaged nukes, firefights in the coastal dunes of Libya (the least developed coastline on the Med) and new reports of ecological collapse in the seas–It’s not a good time for Congress to slash ocean research funding though that seems to be the plan in the latest House budget proposal. In one case they could argue that they’re not slashing a budget but simply refusing to restore $700 million in pre-planned funding to upgrade NOAA’s Polar satellites that are essential in search and rescue, oceanographic, climate and weather forecasting among other uses. This reminds me of the last House effort to gut environmental and science projects in the mid-1990s when a leader of the 104th Congress also proposed getting rid of the Department of Commerce (that includes NOAA). When told that that would mean abolishing the National Weather Service he replied, “You can get that information from the Weather Channel” (not realizing where they got their information). Top

Shadow on the Reef
On March 28 I got to visit the Golden Shadow, the mother ship for the five-year Global Reef Expedition being launched by the Khaled bin Sultan Living Oceans Foundation. The launch party took place in Miami and while Prince Khaled bin Sultan

bin Abdulaziz was there as was the foundation’s Executive Director Phil Renaud (USN Ret.), the star of the evening was the 219-foot ship itself, a combination oceanographic working boat and luxury yacht with its own labs, dive locker, decompression chamber and 9 passenger float plane that can be launched from the ship’s stern elevator. Beginning this month in the Bahamas the Golden Shadow’s crew and various scientists will begin a five-year program of collaborative coral reef research aimed at improving management and protection of the coral heart of our blue planet.  The ship’s journey will cover the Atlantic, Pacific and Indian oceans, all in the name of what the foundation calls ‘Science without Borders.’ Top

On March 22nd more than 75 people from a range of citizens groups and blue institutions including Reef Relief and the Mote Marine Lab descended on Florida’s State House in Tallahassee for their annual Florida Ocean Day to promote healthy seas off their peninsula. On April 4th I joined over 80 fellow Californians for the 4th annual Ocean Day at the state Capitol in Sacramento where, under the coordination of Environment California and with support from groups like the Monterey Bay Aquarium we spoke to our elected representatives about a number of marine concerns from offshore marine parks to improving oil spill prevention. Hawaii’s recent citizen initiated ban on destructive shark finning, that Californians are now working to recreate in law, is another example of bottom up efforts having a positive effect at the state level. We need to recreate these efforts at the national and global level as well if we’re to turn the tide for ocean protection.

On Monday May 23, the last day of Blue Vision Summit 3 (BVS3) in Washington, D.C., we’re gathering hundreds of people, Summit attendees and marine enthusiasts from a variety of sectors, who care about our blue planet to join the largest Capitol Hill Ocean Day in history. We already have state and regional organizers for California,

Florida, New York/New Jersey, Colorado and the Gulf of Mexico but need more. If you’re thinking of helping to educate your lawmakers this May on the importance of a good ocean policy for the United States please sign up (it’s free!) where you register for BVS3 to be part of the Capitol Hill Ocean Day Team. Top

organizations, statewide coalitions, tribes, public agencies, local governments, grassroots groups, businesses and more to learn the best strategies for river restoration and discuss critical information from the field and from Washington, D.C.; and to network and share their love of clean sweet waters of course. For more information visit the website. Top

Peter’s Legacy
While there is a growing understanding of the huge problems and challenges confronting our seas amongst the general public and various public officials, they are not hearing enough about or from the dedicated ocean champions creating and implementing practical solutions to these problems in science, policy and other spheres.

The Peter Benchley Ocean Awards, presented by Blue Frontier Campaign, aims to correct this by acknowledging some of the best among us. Named for ‘Jaws’ author Peter Benchley, the awards are given to those who exemplify Peter’s passion for marine conservation issues and who actively work at improving perception, understanding, and quality of the marine environment.

By presenting the 4th annual awards during BVS3, we have a unique opportunity to celebrate these blue heroes in front of hundreds of their peers who are also dedicating their lives to the protection and restoration of our last great public trust.

The 4th Annual Peter Benchley Ocean Awards will be held at 5:45 PM May 21, 2011 at George Washington University’s Marvin Center, followed by a celebration and fundraising dinner at the Carnegie Institution honoring both present and past recipients. Tickets to both the Awards Ceremony and Dinner are available via the BVS3 registration website.

Earth Day Discount for BVS3
Mark your calendars: Sponsors of Blue Vision Summit 3 are offering a special Earth Day discount — rolling back the registration cost to its early seabird rate of $160 for 24 hours on April 22nd from 12:01AM – 11:59 PM.  Act quickly. The rate will return to its still fabulously inexpensive $215 registration fee April 23rd. Top