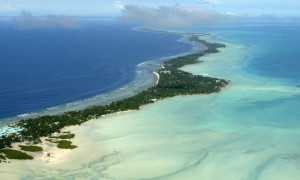 If you‘re not satisfied with how the leaders of major powers like the U.S., China, India and Brazil are addressing climate change or protecting the ocean maybe you could help direct their attention to Kiribati (pronounced Kirr-i-bas). Luckily this tiny islands nation has responsible leadership, which is why, following on last year’s stewardship award to President Laura Chinchilla of Costa Rica, Blue Frontier Campaign and Wendy Benchley are proud to announce this year’s 2012 Peter Benchley Ocean Award for Excellence in National Stewardship is going to President Anote Tong of Kiribati. He will be joining seven other outstanding winners in San Francisco, June 1 at the 5th Annual Peter Benchley Ocean Awards (see Blue Notes #96 for who else we’ll be honoring).

President Tong was in the news recently over his government’s negotiations with the nation of Fiji for a 5,000 acre land purchase to provide new opportunities for his people in the face of inundation from rising seas linked to fossil-fuel fired climate change. These opportunities would include the beginning of population relocation, as well as farm production and landfill for export to the low-lying atolls nation of 100,000.

President Tong, recently re-elected for a third term, has become a globally recognized figure for his work on climate response, ocean protection and regional collaboration. He was instrumental in creating one of the World’s largest and most

biologically rich marine protected areas, the Phoenix Islands Protected Area, that was recently declared a UN World Heritage Site. He has also been an outspoken global advocate for climate response given the threat sea level rise poses to his nation and people. He is also a key player in the Pacific islands Forum of 16 independent states that are taking control of their marine resources.

I got to interview President Tong on his last visit to the Bay Area during the 2010 California and World Ocean Summit. Here’s part of what he had to say at that time.

Q: What motivated Kiribati to set aside the largest marine reserve in history?

A: Earlier at the United Nations I was bitter at the international community for not listening [on climate change]. But then it became clear that if we made a contribution this large, it was also a statement on our part. So, this was a significant contribution to the world community in the hope they would also act.

Q: Kiribati was the first nation to greet the new millennium [because of its location on the international dateline], but it may not be around to greet the next century because of rising sea levels.

A: This is exactly right, and this is the challenge for the global community to act. I went to [the 2009 global climate negotiations in] Copenhagen and I was extremely disappointed. There was not what we’d have liked to see there. Where will our people go [if our land is submerged]? No one has come forward with an offer [for relocating Kiribati’s population]. We would take what’s available. The former president of Zambia told me “we have plenty of room,” and we could move there, but he’s since died. New Zealand allows 75 [Kiribati] people in its annual quota. A scenario like that is doable, but it would have to be greatly expanded.

Q: Can you envision your people being relocated intact, the whole population staying together in another place?

A: That’s hard to envision. 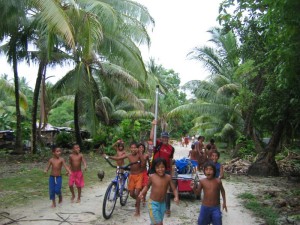 Q: Returning to the more hopeful subject of the new marine reserve, you’re also working to create a linked system of protected areas across the entire Pacific Ocean, aren’t you?

A: We’re looking to work with others on a Pacific oceanscape framework and again moving ahead, moving forward. You cannot do one of these in isolation. We need to link with the rest and beyond because the ocean does not stop where political boundaries are drawn. It’s a dream, and if we all dream alike, we can make it so.

Want to meet President Tong? Join us at the Benchleys.

waterfront in lower Manhattan and told me that by mid-century 100 year floods would become decadal events along America’s shores. The Ambassador from Micronesia was with us and explained how their taro fields and his family cemetery plot were already being flooded. Now a new and widely reported study put out by the Princeton, New Jersey-based research center Climate Central says the risk of more extreme coastal flooding in the U.S. has already doubled due to sea level rise and by 2030 once in a century storm surges will in fact be occurring every decade threatening the homes of 4 million Americans living in coastal areas less than four feet above sea level. Some of the greatest at risk areas are southern Florida and southern California. And while the natural world is warming the virtual world just keeps getting cooler so that if you go to their website Climate Central will let you input your zip code and show you how much risk your own home is at. I checked it out. My marina townhouse in Richmond, California is OK for now but the San Francisco Bay Trail where I jog will be underwater by 2020 during most king tides and winter storms and that’s just 8 years from now. So forget our obligation to future generations and welcome to the Greenhouse Century we’ve already created, home to expanded tornado seasons and weird winters! At least California is starting to do some coastal adaptation planning for sea level rise. Florida’s governor Rick Scott says he’s not convinced “that there’s any man-made climate change.” Neither officially are any of his party’s four presidential candidates. In terms of evolution and the theory of gravity they’re also up in the air. Top

Seaweed Spotlight
A regular feature of Blue Notes where we shine the light on a group from the Blue Movement Directory in order to create a more self-aware and collaborative movement. This month we feature two groups that share a common island chain, the Conservation Council for Hawaii and Kahea.

The Conservation Council for Hawai‘i (CCH) is one of Hawai’i’s oldest wildlife organizations with some 5,500 members. Since 1950 it’s been a leader and coordinator of the environmental movement in Hawai’i helping shape some of the most important policies and programs in the Islands, opposing sand removal from public beaches in the 1950s, fighting for a “greenbelt” land use law in the 1960s, opposing commercial whaling, reckless development and invasive species in the 1970s, fighting pesticides and logging on Moloka’ in the ‘80s, and continuing to protect native ecosystems and fight inappropriate coastal development up until the present. Today its four strategic drivers include responding to climate change, invasive species, defending wildlife and connecting people to nature which in Hawaii is largely about the sea and the shore including regular beach clean-ups and educational campaigns in defense of Na Manu Kai (Birds of the Sea), fish, turtles, sharks, seals and other of our sibling creatures.

The Council has long built, led and worked in coalitions for needed legislation (from banning the shark fin trade, to funding nature reserves to charging for single use plastic) in partnership with the National Wildlife Federation, Kahea, Surfrider and other local organizations, government agencies, and communities.

Executive Director Marjorie Ziegler has worked for the Council since 2003. She was raised on the Windward side of Oahu. Her father was a zoologist and dedicated environmentalist, “and I grew up with a number of semi-wild pets, and a healthy attitude about standing up for wildlife,” she recalls. “I now live in ‘Ahuimanu not far from my family’s home. Protecting rare and endangered Hawaiian species is definitely my passion,” she says, “speaking out for those who have no voice at the table: Hawai’i’s native plants and animals.”

Another of Hawai’i’s more effective seaweed activist groups is Kahea – The Hawaiian-Environmental Alliance. Kahea translates from Hawaiian as “the call,” and this group, founded just twelve years ago works to call people together to resist, “assaults to Hawai’i’s land, ocean, water, native species, culture, and way of life,” believing that, “the land and the people are one.”

“Our campaigns are about increasing the ideals of Aloha for all of the sacred beings and we’re one of the only native Hawaiian conservation groups and its proper to lead in this way—to help resolve issues and build Pono, or righteous relationships,” explains Kahea’s acting President Kealoha Pisciotta, who lives on the Big Island and once represented Hawaiian Rights activists at the United Nations.

With a small staff of two women and 12,000 members on every island and beyond, Kahea works on issues including ocean protection, environmental justice and creating functioning non-industrial food systems, including restoration of traditional fish pond aquaculture.

Among their projects they’re campaigning to strengthen the critical habitat protection status for endangered Hawaiian Monk Seals whose numbers are now below 1,100 putting them at risk of going the way of the Caribbean Monk Seal declared extinct in 2008. Kahea has partnered with the Conservation Council for Hawaii to create PSAs and TV commercials on the Monk Seals that will roll out during the annual Merry Monarch Hula Festival in Hilo.

Having been a key player in the bottom up citizen movement to give the Northwestern Hawaiian Islands recognition as a unique coral and predator-dominated ecosystem, Kahea is also working to assure the continued protection of the Papahanaumokuakea Marine National Monument, one of the world’s largest ocean sanctuaries (and home to 70 percent of U.S. coral reefs). They are also part of a coalition appealing a plan for a massive new hedge fund-backed 26-story hotel and condominium development that would shadow and encroach on what’s left of the famous wave-sliding beach at Waikiki where Jack London first reported on surfing for the mainland media.

We occasional visitors to the archipelago can only say Mahalo Nui Loa for the work these groups are doing and a shout out to the many other waterwomen and men of Hawai’i struggling to protect and restore their culture, wild places and ocean based way of life. Top

Is this river otter praying for clean water and an end to polluted runoff? Sometimes prayer’s not enough and you just have to roll up your shirtsleeves (unless you’re a member of the weasel family and don’t wear shirts) and begin working for the change you want. Please join Blue Frontier Campaign in our work to turn the tide for our coasts, ocean and the communities that depend on them. Join us June 1 at the Benchley Awards if you can. (Get your Tickets!) Any donation you can make will also be greatly appreciated. (Show us some love!) Top