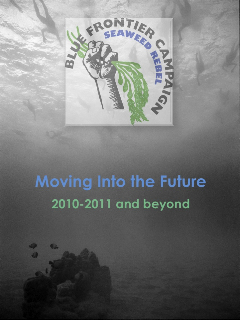 The cascading crisis in our seas from overfishing, pollution, coastal sprawl and climate change is real and critical. Blue Frontier is the only group dedicated to promoting unity among all ocean interests in order to build a social movement for our seas and identify and enact solutions that can make a difference both in policy and in the water.

If once we had to ‘think globally and act locally’ BF believes that new conditions require we think globally but act locally, regionally, nationally and globally simultaneously if we’re to turn the tide and restore our blue planet.

BF is continuing its efforts to:

BF is expanding its work:

BF is dedicated to following up on the White House’s Ocean Policy initiative by seeing it codified into law as a U.S. Ocean Protection Act.  Also BF believes that along with a newly dedicated ocean fund, the U.S. needs to establish a Department of the Ocean made up of the U.S. Coast Guard for operations and the National Oceanic and Atmospheric Administration (NOAA) for science and policy to provide solid leadership for the restoration and use of our public seas.

Blue Frontier has spent seven years promoting a “seaweed rebellion,’ of bottom-up solution-oriented marine grassroots efforts in the United States.   At the same time we recognize the world ocean has no borders or boundaries.  In 2011 we want to begin the process needed to take our vision global.

The first step will be to update and expand our ‘Ocean and Coastal Conservation Guide’ that was a book and is now an online directory identifying over 1,200 U.S. citizen groups, agencies, science centers and marine parks working on ocean protection.  We need to include their counterparts around the world.

This project would run parallel with the planning of a first global Blue Vision Summit for our Blue Planet.  Summit planning, including an appropriate venue outside the United States, could begin at or before the spring 2011 Blue Vision Summit in D.C.

BF will also continue to solidify the Blue Frontier/Peter Benchley Ocean Awards as the gold standard for marine conservation recognition of excellence in a range of fields and disciplines including science, policy, media, youth activism and the grassroots, ‘Hero of the Seas’ category.

BF will also continue to expand its educational efforts through public speaking, its Blue Notes online newsletter, opinion and video pieces in the media and its ’50 Ways to Save the Ocean’ book distribution and educational spin-offs.

To achieve all this BF needs to rapidly expand its capacity (we presently have a staff of two and a part-time intern).  This means a major development campaign focusing both on foundation and private sector support for our efforts as well as individual donors, an expanded board of directors recommitted to meeting these goals and a series of well-targeted fundraising events.

A short video about Blue Frontier’s aims and efforts, incorporating existing footage will also be produced as a way to introduce people to our organization.