You expect certain things from a book on the history of the California coast—a forward written by Ted Danson is likely not one of those things. But Sam “Mayday” Malone (look it up, kids) loves the ocean and his experience as a coastie is likely similar to lots of ours: he moved to the beach because he liked going to the beach, and once he settled in, he looked around and realized that not only was the coast he loved often under threat – it has a long, fascinating history that’s worth knowing.

Which is why you should read David Helvarg’s terrific (new in paperback) book, “The Golden Shore: California’s Love Affair with the Sea.” Not because of Danson’s forward, I mean, but because the history of California’s relationship with the Pacific Ocean is an integral part of your life if you live and surf in the Golden State. Know your history, folks. 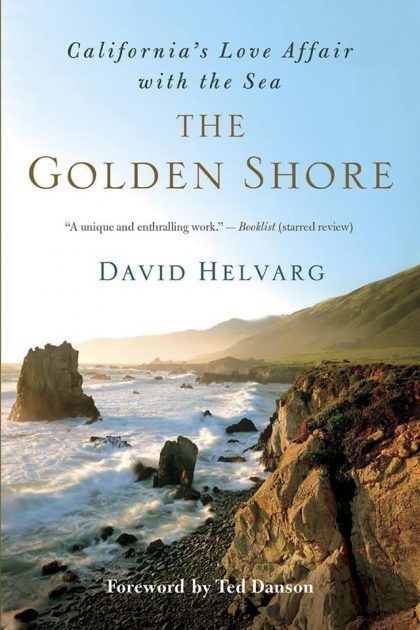 What do you want to know about the history of the California coast? The first native Americans who ventured south from the Aleutians? They’re in here. The devastation industrial fishing has caused to the wild fisheries? Helvarg’s on it. The European voyages that settled the state’s first great ports? Oh, yeah. The effects of World War II and military mobilization on Southern California? Boom. All the crazy things that go into making transPacific shipping work? Yup. How California’s coastline is one giant lab for the best marine scientists on earth? You’re in luck, that’s in here, too. The great work environmentalists have done to protect the joint? No problem. Helvarg even gets into the history of California surf culture, but if you’re reading this far, I’ll just assume you’re already well-versed in that. In fact, the surf part was the least interesting of the whole book.

But everything else was a joy to read. Really, a joy. Helvarg literally takes you on walking tours of the places he talks about; get ready to want to discover parts of California you’ve either never been to or have completely forgotten even existed. I particularly enjoyed the section on how often European “explorers” kept sailing right on past San Francisco Bay because it was too obscured by fog for them to see it. Amazing to think of how the bay must have looked before overcrowding and civilization drained most of the rivers that empty into the Golden Gate, harvested all the sea life, and physically changed the bay’s coastline topography. Oh, wait, Helvarg covers all that, too.

We gets lots of books about surf culture and ocean history thrown our way here at the world’s foremost repository of surf knowledge, but we don’t make it a point to recommend them unless we’re particularly moved. Well, consider us impressed by Helvarg’s book. Starts off with Ted Danson, ends with you ready to stroll down to the shore to figure out a way to give the California coast a great big hug.
Read more at http://www.surfermag.com/blogs/reviews/california-the-real-gold-coast/#V6HeuCRYk46ZyKc2.99