Top
You are here: Home / articles / How Should a Fish Vote in This Election? 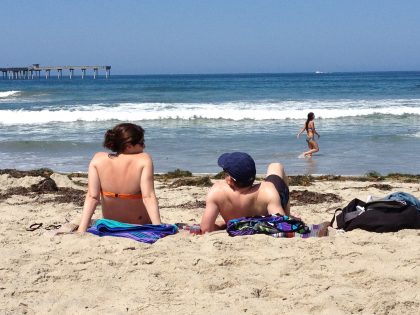 Hillary Clinton and Donald Trump have vastly different positions on immigration, education, health care, trade, and foreign policy. One of the few things both presidential candidates have in common is a failure to address what to do with the blue in our red, white and blue.

Ocean policy has yet to be mentioned on the 2016 campaign trail, despite toxic green algae covering large stretches of the Florida coast this summer and the many other signs of pollution, overfishing, loss of habitat and climate change impacting our public seas. More than 100 ocean leaders in business, science, conservation, and education have drafted a letter to the candidates urging them to speak up. Signers include Dr. Sylvia Earle and Philippe Cousteau, the heads of Scripps Institution of Oceanography, the National Aquarium, the Professional Association of Dive Instructors and former heads of EPA and the National Oceanic and Atmospheric Administration.

Some of the key issues are illegal fishing, creating marine protected areas, coastal adaptation to sea level rise, and realistic levels of funding for frontline maritime agencies involved in conservation, exploration and law-enforcement (like NOAA and the U.S. Coast Guard). We also need a national ocean policy to help coordinate among all the different national, state and local interests granting permits for use of ocean space. For example, offshore wind farms need to be located where they don’t impact fishing or shipping lanes or breeding and feeding areas for whales and other marine wildlife.

How will the next President act on these issues? One has to read the kelp leaves to know what a Clinton or a Trump administration might do for our public seas.

Hillary Clinton’s campaign has put out an environmental “briefing” that confirms her stand from earlier that she will not support new oil drilling in the Arctic Ocean or along the Atlantic seaboard.  She has not yet taken a position on continued drilling in the Gulf of Mexico that accounts for about 17 percent of domestic oil production. In calling for the protection of communities from the threat of sea level rise, she acknowledges the impacts of climate change. She also calls for infrastructure improvements including upgrading water treatment facilities and storm drains that could help reduce coastal flooding.

The strongest indicator of the direction of ocean policy under a Clinton Administration might be the role her campaign chair John Podesta, who has a reputation for aggressive environmental policy is likely to play in a Hillary Clinton White House. As Counselor to President Obama Podesta had a major influence in the President’s decision to expand vastMarine Monuments in the Pacific. Earlier this year he tweeted “Oceans are under threat from climate change, ocean acidification, pollution and illegal fishing. We need Action now.”

It’s hard to be specific about the positions Trump will take in regard to our public seas. His campaign only lists seven issues of concern and the environment is not among them.

One major challenge for Mr. Trump when it comes to ocean health is his insistence, contrary to well-established science, that climate change is a “hoax.”  While reflecting Republican political orthodoxy, this makes it unlikely he’ll respond to a range of threats to our seas from climate change, such as ocean warming, increased storminess, ocean acidification, and sea-level rise. The managers of at least one of Trump’s coastal properties in Scotland, on the other hand, are already planning for sea-level rise adaptation.

Trump’s call for expanded oil drilling and a revival of coal mining poses other challenges. Mercury from coal-fired power plants is now the major source of deposition (through rainfall) of this dangerous neurotoxin into the ocean.

The candidate’s son and advisor Donald Trump Jr. is a big game hunter and fisherman and fan of Theodore Roosevelt, America’s first conservationist President.  Donald Jr. has called for keeping public lands public (not selling them off to the states) but has yet to publically address ocean issues.

The non-partisan Ocean Champions group, which tracks the performance of lawmakers on ocean protection and raises funds for marine conservationists running for office, thinks this November could see more ocean advocates or ‘champions’ elected to Congress than at any time in history. They’re endorsing some sixty candidates this year.

Given the present state of our overfished, overheated, highly polluted public seas, we could use all sixty in office, plus a President with the vision to see beneath the surface and give hope to our endangered blue world.

David Helvarg is an author and Executive Director of Blue Frontier, an ocean conservation and policy group.  His latest book, The Golden Shore – California’s Love Affair with the Sea will be out in paperback this fall.

« « Older Entry | Next Entry » »
« Previous Post: Will Obama Protect the Atlantic’s Grand Canyons?Next Post: Hillary Clinton Reveals What She Will Do for the Ocean »