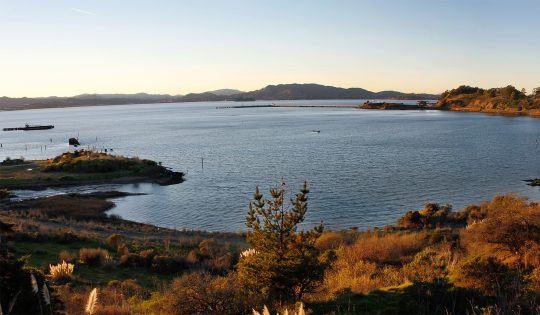 Soon after I moved to Richmond, California, nine years ago, I was told, “It’s the most beautiful part of the Bay Area no one’s ever heard of.”

It rang true even before I made my first sojourn to Point Molate, my city’s greatest natural treasure, where I now regularly bring loved ones, friends, and local high school students.

Point Molate is 413 acres of spectacular wooded uplands, native grasslands, and eelgrass meadows just north of the Richmond Bridge. Its breathtaking view of Marin County’s Mount Tamalpais (“Mount Tam”), gets better as you climb higher up its 400-foot hills. At the top is a ridgeline that divides the spectacular headlands from Chevron’s sprawling century-old oil refinery on the other side. This is the last significant green space left on San Francisco Bay.

The area, largely undeveloped, does feature a historic wine port, Winehaven, with a red brick castle and a company workers’ village along with bits of old railroad tracks, piers, concrete pads, and buried storage tanks. The wine port, once California’s largest, then functioned as a U.S. Navy fuel depot before the Navy sold it to the city for a dollar in 2003.

In 2010, Point Molate almost became the biggest casino development west of Las Vegas, with 4,000 slot machines, two luxury hotels, and unaffordable housing. But the mostly low-income people of Richmond, despite the promise of jobs, voted the scheme down 58 to 42 percent, expressing their fear of increased crime, traffic, and gambling addiction.

Still, despite having more shoreline than any other Bay Area city, Richmond is the only one without an integrated plan to deal with threats to its shoreline, including sea level rise, erosion, and unsustainable development—the specter of which is again looming over Point Molate.

Jim Levine, the failed casino developer who in 2010 sued the city for rejecting his plan, and Richmond Mayor Tom Butt recently began negotiating a massive real-estate developmentthat could include up to 1,100 high-end houses and condo units. The scheme has been discussed at four closed-door, Richmond City Council meetings this past summer, with another one likely this fall.

The real-estate development, as understood through public records requests, would be part of a proposed lawsuit settlement with Levine that would reward him for having gambled and lost, including all his legal appeals to date. (Last year, a federal judge ordered him and his cohorts to pay Richmond $2 million in attorneys’ fees.)

The settlement, if it goes through, would exclude any alternative development plan. The mayor seems to advocate for this kind of deal, having written,

“as much as some people would like to see it, I don’t think Point Molate is going to end up as predominately [sic] open space.”

He’s also argued that there should be a “neighborhood” (massive housing) on the headland.

A few years ago, I got permission from the U.S. Fish and Wildlife Service to spend two nights on the Farallon Islands—known as California’s Galapagos but off-limits to visitors—while working on my book, The Golden Shore: California’s Love Affair with the Sea. I was on the islands with six scientists, 10,000 seals and sea lions, and 100,000 seabirds, including puffins. (The islands are perhaps most famous for their great white sharks that congregate there every fall to feed on juvenile elephant seals.)

I felt like I was back at Palmer Station in Antarctica or one of the other remote marine science stations I’ve visited while covering the ecological wonders and threats of the new age we live in, when human activity defines planetary processes from local land-use decisions to global carbon and nitrogen cycles.

The funny thing about the Farallons is that they’ve got a San Francisco zip code. At night on the islands, if the marine layer’s not too thick, you can see the streetlights of the city’s Ocean Beach neighborhood some twenty-five miles away. Yet you sit surrounded by a dome of stars, rocky spires and the screeching cacophony of thousands of gulls, many strutting within feet of you.

I had a similar feeling of happy disequilibrium when a red-bearded botanist named Lech Naumovich first took me out to Point Molate in 2007. It appeared as if a large slice of Angel Island State Park had drifted onto urban Richmond’s thirty-two miles of shoreline.

Lech, along with an incredible knowledge of landscape and habitat, held the keys to paradise—literally. These he used to unlock the chain-link fencing that still blocks public access to most of Point Molate’s wonders, including its uplands, coastal bluffs and giant bowl of a creek-fed watershed, home to more than 100 species of migratory and native birds.

Local volunteers, including members of the California Native Plants Society, have begun working to remove the French broom and other water-thirsty, invasive plants that are crowding out native grasses and flowers. They’re not too worried about the invasive but still lovely eucalyptus groves and woods that have long covered the hills above the old wine village.

This built up area is the focus for various citizen-initiated plans proposed for a historically themed recreational hub by the castle and village. The plans include restaurants, a conference center, museum, and LEED-certified inn that would be surrounded by public green space for camping, kayaking, sports fields, and hiking trails. After the chain-link fences come down, the recreational fees and taxes from these, and other sustainable uses could help fund long-term jobs and new opportunities that will allow people to connect to their waterfront heritage and the natural world.

I first got to know Richmond in the 1980s when I was working as a private investigator. Almost half my public defender work was there, mostly homicides and drug cases. It was a corrupt, crime-ridden town dominated by Chevron and sticky fingered politicians. The police force was mostly white and brutal, self-identified “cowboys” and the population was mostly African American and low-income, including several kids who ended up as my clients.

Since then, the demographics and some of the politics have changed. Today, Richmond is 40 percent Latino, 30 percent African American, 20 percent Caucasian and 10 percent Asian and other folks. It is still mostly poor, but with community-based policing and a force that reflects its population. With new jobs in solar and other sectors and expanded youth services and training, the homicide rate has dropped to a thirty-year low while the political engagement of its citizens is at an all-time high. Local community activists helped elect a Green Party mayor in 2006, defeat the casino plan in 2010, and reject a city council slate massively funded by Chevron in 2014.

One of Richmond’s longtime community activists is Andres Soto of Communities for a Better Environment. On Earth Day 2012, I worked beside Soto and others collecting a truckload of trash on the half-mile crescent beach at Point Molate that had been shut down to the public for over a decade. In April 2014, the beach officially reopened, with then-Green Party Mayor Gayle McLaughlin and others cutting a ribbon with a giant scissors as a crowd of locals cheered. Soto played with a Latino jazz band as the Richmond Fire Department Fireboat blasted a powerful arc of rainbow refracting water into the air and newly installed picnic tables and cooking grills got their first test runs from the hungry celebrants.

Since then, Citizens for a Sustainable Point Molate, which led the anti-casino battle and to which I belong, has worked to expand public access to Point Molate. We’ve raised money to bring Richmond High School classes to Point Molate on all-day field trips and recently received a Coastal Conservancy grant to transport low-income Richmond community groups and citizens to the park.

I remember the first two busloads of teens from John F. Kennedy High School pulling up at the beach before taking waterfront classes and hikes along the shore and through the uplands with Lech. As a group of girls disembarked, they spotted several Canada geese with a line of fluffy yellow goslings marching behind them and exclaimed, “Awww…!” Later, some of the boys found a dead bird and bat ray on the beach that got them all excited. And when the whole class spotted harbor seals in the water—most had never seen a live seal before—that took their interest to a whole other level.

While walking back from watching nesting ospreys at the end of the old Navy pier, a seventeen-year-old girl told me she’d been to an anti-pollution protest in front of Chevron’s refinery on the other side of the hill but didn’t know the beach and shoreline were here. By the end of the field trip, the students were planning their Senior Sunset at Point Molate.

A few months ago, thirty students from the Health Academy at Richmond High School were in the middle of an open-air class, sitting under some trees by the beach bluff, when an osprey flew down and snagged a fish out of the water with its talons. They all shouted in amazement. There was more shouting when some students discovered a six-inch fence lizard on a tree. I asked them what they thought. “It’s like a miniature dinosaur,” one of them observed.

A dozen local and Bay Area social and environmental justice groups have come together to form the Point Molate Coalition to affirm the parcel’s unique and special place and insist that it be developed carefully, democratically, and sustainably. Rather than opting for a questionable legal settlement that would despoil and privatize a great public space, Richmond should make sure future generations of its youth have the opportunity to visit Point Molate.

Here, by the edge of an urban estuary linked to a wild ocean, those generations might yet learn how the web of life can be as strong as a fearless flock of wild turkeys by a wine-red castle or as fragile as the blue green wings of a swallowtail butterfly.

David Helvarg is an author and executive director of Blue Frontier, an ocean conservation group. His book The Golden Shore: California’s Love Affair with the Sea, will be available in paperback in October.