Float for the Coast 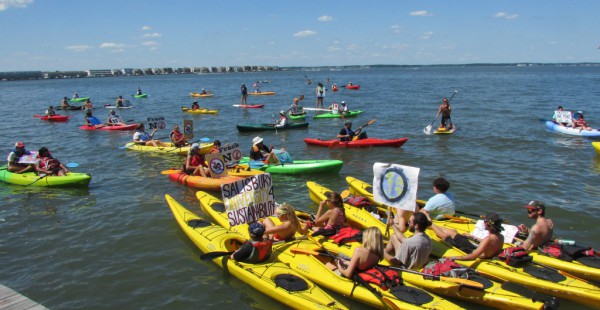 Upwards of 100 watermen and women on 50 kayaks, stand up boards, a Boston whaler and pontoon boat gathered on the water in front of Ocean City Maryland’s Convention Center on Friday August 14 organized by Assateague Coastal Trust, Waterkeepers and other Sea Party groups including a Blue Frontier contingent of paddlers and speakers. This was the first pod of kayaktavists to appear off the east coast following major schooling in the harbors of Seattle and Portland Oregon that blockaded Shell Oil vessels headed to the Arctic Ocean. Shell has now arrived and begun exploratory drilling.   Plans for drilling off the east coast are also moving forward despite growing popular opposition. 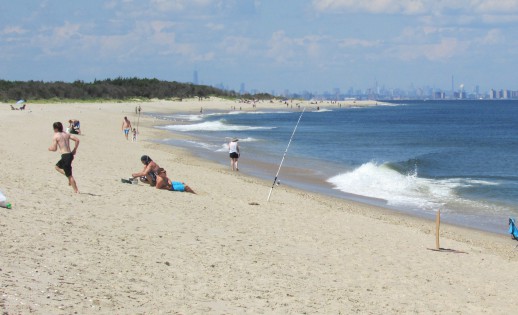 Along with this month’s floating protest in Ocean City I also got to visit Montauk at the eastern end of Long Island, Sandy Hook at the northern tip of New Jersey and the Assateague National Seashore on the Eastern Shore of Maryland. While they contain some of the most spectacular beaches, shorebirds and wild ponies I’ve seen in a while I also got to observe some of the problems associated with bad coastal planning and development. In the Hamptons, aka Disneyland for the rich, its congestion and septic runoff that’s generating algal blooms this summer. Post-Hurricane Sandy Jersey shore towns like Highland have rebuilt in harm’s way even as sea level rise exposes them to regular flooding and gradual decline. With rising seas and storm tides Ocean City Maryland is a larger scale example of building in harm’s way that could threaten, among other things, one of the world’s great congregations of miniature golf courses. 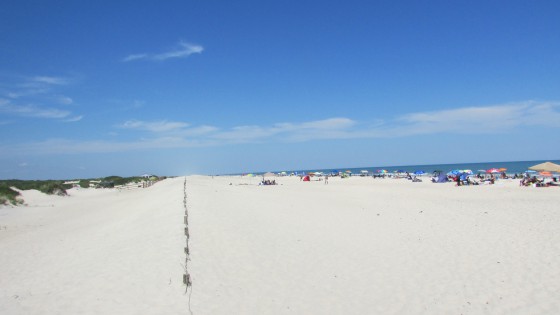 But despite the ongoing challenges faced here and in similar beach areas like Cape Code Massachusetts, North Carolina’s Outer Banks and Florida’s Gold Coast the eastern seaboard remains an escape and refuge for tens of millions of people seeking to reconnect with the other 71 percent of our blue planet. A day at the beach can still be like the good old days in the here and now. Beach going is still the U.S. number one outdoor recreational activity generating hundreds of billions of dollars in tourism and real estate. Putting all of this at risk to open up the eastern seaboard to new offshore fossil fuel drilling and inevitable spilling that will in turn promote more hurricanes and sea level rise is the definition of a bad idea that’s now become bad policy.

President Obama’s historic Climate Action Plan announced Monday August 3 and focused on reducing carbon dioxide emissions from U.S. power plants 32 percent over the next 15 years promised real leadership leading into the U.N.’s Climate Summit in Paris this December. Then on August 17 he permitted Shell Oil to begin exploratory drilling in the Arctic.

It’s hard to understand the logic by which this administration aims to reduce carbon outputs while encouraging massive new inputs by promoting oil development not only in the newly opened waters of the Arctic Ocean (opened by sea ice loss linked to fossil-fuel fired climate change) but also drilling along the crowded Atlantic seaboard.  These are two high-risk enterprises that, in the case of the Arctic, also has a 75 percent chance of a major oil spill in the future according to a study by the

Department of Interior that is nonetheless permitting Shell’s drilling.  And of course a BP type disaster not in the Gulf of Mexico but along the Atlantic seaboard with its more diverse ocean economy is something no one wants to contemplate although we’ll have to if present plans for exploratory acoustic surveying, leasing and drilling continue to move forward.

The contradiction between reducing greenhouse gas emissions while seeking new carbon energy offshore hasn’t gone unnoticed by the world’s other major greenhouse gas emitter China.   Four days after the President’s August 3rd announcement the deputy editor of the China Daily U.S. edition that translates China’s official policy and news perspectives into English wrote a biting column charging the U.S. with “hypocrisy” over carbon emissions citing its planned new offshore drilling and insisting that if China commits to carbon reduction (in Paris) it won’t be because of U.S. leadership but because of its own air pollution.

A study, based on the President’s EPA draft climate plan from last year indicates that while the regulations for coal-fired power plants would reduce greenhouse gases by some 2 billion tons a year, there could be upwards of 60 billion tons of greenhouse gases released from the drilling and burning of all the industry estimated offshore petroleum to be leased starting in 2017.

At the same time a report in the journal Science states that the only way to avoid catastrophic climate impacts associated with projected warming above 2 degrees Celsius is to leave at least 80 percent of known coal reserves and 30 percent of known oil reserves in the ground and under the seabed.  That’s what California has chosen to do since the first Santa Barbara oil spill of 1969.   When I asked Secretary of Interior Sally Jewel why the administration was not going to offer federal leasing for already known reserves off California and the West Coast she more or less admitted the whole process was political stating, “If the states don’t want it, it’s more likely you’ll concentrate where they do.” 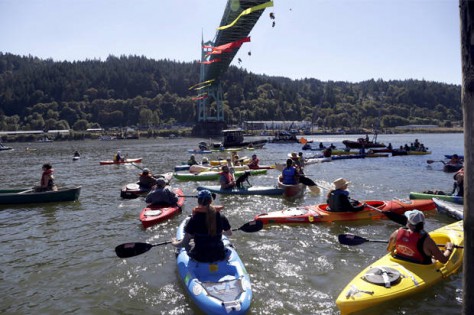 Kayakers gather as activists hang from the St. Johns Bridge in an effort to stop the Royal Dutch Shell PLC icebreaker Fennica from departing in Portland, Ore., Thursday, July 30, 2015. The Fennica left dry dock and made its way down the Willamette River toward the Pacific Ocean soon after authorities forced the demonstrators from the river and the St. Johns Bridge. (AP Photo/Don Ryan)

th and 19th centuries to the clean energy revolution that will define this century.  So what will it take to focus on a real and practical energy policy?

At the 1992 UN Earth Summit in Rio where initial plans to reduce greenhouse gas emissions led to the failed Kyoto protocols I witnessed a march by 30,000 local residents and global environmentalists behind a banner carried by Buddhist monks with cell phones that read:  “When the people lead the leaders will follow”

Today citizen activists are mobilizing against offshore oil from the bridge-hanging and paddle waving Kayaktivists of Seattle and Portland and Ocean City to some 60 east coast towns and cities that have passed resolutions opposing any new acoustic surveying and drilling to our growing Sea Party Coalition that plans to make offshore drilling a major issue – the Keystone Pipeline of the seas – in primary states and presidential debates during the 2016 election season.

Our movement should not be confused with NIMBYs or, more accurately, NOBOs ‘Not On My Bay or Ocean.’  While vehemently anti-oil pollution the Sea Partiers are also pro-jobs and green power advocating for the emerging clean energy sector including solar, hydro and on and offshore wind where appropriately situated.  After all no wind spill ever destroyed a beach or a bayou.

Check out the Sea Party Coalition membership list here and consider if your group or business would like to join. For More on the Sea Party, Click Here.

Dead Zones on the Move

It’s also a given that a warmer more acidic ocean will contain less dissolved oxygen meaning more dead zones in our seas. Right now the biggest North American dead zone is in the Gulf of Mexico where seasonal discharges of petroleum-based synthetic farm chemicals from the Midwest corn and soy fields grows a second crop of algae every summer. This year’s dead zone has grown to be the size of Connecticut and Rhode Island combined.

For more see this article

Lobsters on the Move 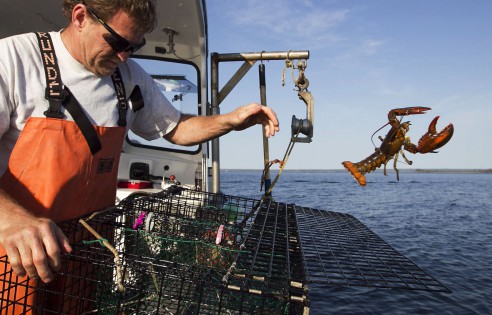 FILE – In this May 21, 2012, file photo, Scott Beede returns an undersized lobster while fishing in Mount Desert, Maine. Fisherman in northern New England have been catching record numbers of lobsters, but south of Cape Cod, the lobster population has plummeted to the lowest levels ever seen, in a northward shift that scientists attribute in large part to the warming of the ocean. (AP Photo/Robert F. Bukaty, File)

At this year’s Peter Benchley Ocean Awards Senator Ed Markey talked about climate change and the migration of marine wildlife due to warming ocean currents with cod and lobster moving north, “voting with their fins and their claws.” Here is a report on the lobsters’ movements.

Heroes for you to Name

Senator Markey was a 2013 winner for policy. We’re asking you to help nominate your heroes of the sea for the 9th annual Peter Benchley Ocean Awards that will take place May 20, 2016 at the Monterey Bay Aquarium in California.  Nominate your heroes here.

The 2015 Benchley Media winner was the Economist magazine. Past media winners have included filmmakers and writers like Washington Post White House reporter and author Juliet Eilperin.   Writers for the Sea is our newest project with over 50 author members to date. Its also got a lively new facebook page that is open to all. Check it out at: Writers for the Sea

A Few Clams Will Do

And if you like Blue Notes or any of Blue Frontier’s myriad projects and efforts – all done with a small staff plus many friends and volunteers – please consider a tax-deductible donation to keep us afloat. Thanks and have a great Labor Day at a beach or other body of water.