Great Victory- On to New Orleans! 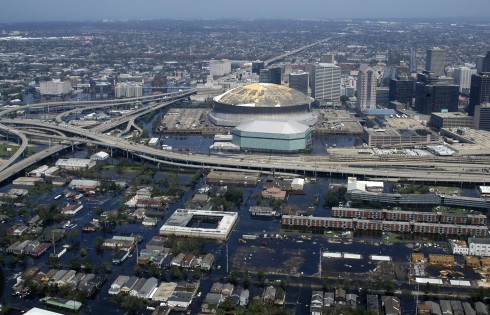 Proposed Atlantic drilling has gone the way of the Keystone Pipeline – a bad idea whose time has passed. President Obama’s decision to cancel his own proposed lease sales for oil and gas along the Southeast Atlantic coast on March 15 was a clear victory for grassroots activism up and down the eastern seaboard. Seaweed (marine grassroots) activists by the millions signed petitions, passed town and coastal city resolutions, mobilized small businesses, demonstrated and spoke out along with their elected officials of both parties and together they turned the tide.

But the Gulf of Mexico and Arctic Ocean remain open to future drilling and the next President could easily reverse the present course away from fossil fuels and toward job-generating clean energy sources.

That’s why I’ll be flying into New Orleans to join hundreds of Gulf Coast citizens from climate, health and environmental justice groups rallying outside New Orleans’ Superdome the Wednesday March 23 to oppose a federal auction for offshore oil leases taking place there.   The lease sale, occurring inside where hurricane refugees once huddled in their thousands, offers up to 43 million acres in the Gulf of Mexico for oil and gas development, the largest sale of Obama’s presidency. But the people of the Gulf are tired of seeing their land, their waters, their health and their communities turned into a national sacrifice zone for the fossil fuel industry. Right now about 20 percent of U.S. crude oil production comes out of Gulf Waters, where dolphins are still dying, people still getting sick and oily waste still surfacing from the massive BP oil spill of six years ago.

Twice in the past decade I’ve been to New Orleans and the Gulf Coast reporting on disasters. Hurricane Katrina reminded me of war zones I’d covered only with fewer casualties (over 1,400 dead by the time I arrived) and far greater destruction; in the abandoned flooded city with its receding mud line bisecting thousands of homes, business, churches and schools and the sunken parishes to its south and the devastated coastal impact zone below I-10 extending east as far as Alabama.

A NASA scientist in New York told me Katrina represented the kind of once in a century storm we can now expect to see every decade or so with warming, rising seas from fossil fuel fired climate disruption. Super Storm Sandy hit New York and the eastern seaboard just 7 years after Katrina.

If covering Katrina reminded me of war zones I’d worked in, reporting on the BP blowout that killed 11 rig workers, the subsequent months-long spill reminded me of something else. Witnessing a large pod of dolphins and a humpback whale trapped and dying in the oil, the smoky black plumes of fires set on the oil thick water, the blackened marsh grasses and dead oyster beds of Barataria Bay, the hundreds of blackened pelicans being cleaned near the hurricane devastated town of Buras and the smoggy offshore disaster site where some 70 vessels gathered the day the wellhead was capped amidst the stink of hydrocarbons, reminded me of cancer wards and of seeing loved ones dying.

Like using whale oil as the lubricant of the machine age, fossil fuels seemed to make sense for a time; but the best available science, and the proof of our own eyes and senses, tells us it’s now time to quit it or die. The solar industry now employs more than three times the number of people than does the U.S. offshore oil industry, plus no wind spill ever destroyed a bayou. Solar accounted for 1 percent of all new jobs in the U.S. last year while the oil sector is seeing continued job layoffs. The organizers of the New Orleans protest –  Nonewleases.org – are demanding 1,000 new jobs repairing the dangerous rusting infrastructure of the oil industry along the coast and offshore to mark the beginning of a transition to clean energy on and offshore. I’ll be joining my fellow seaweed rebels this time not to report on, but to help avert a disaster. 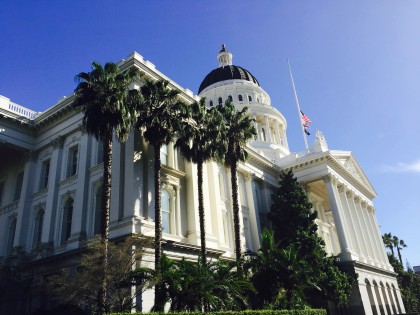 Being part of the 11th annual Ocean Day at the Sacramento State House last week reminded me of our Healthy Ocean Hill Day at the U.S. Capitol last spring, only with far fewer corridors to hike and mostly nicer (more ocean-friendly) politicians. Organized by Environment California and Surfrider Foundation, about 70 state coastal and ocean activists split into ten teams to meet with California’s elected officials and their staffs. My team included folks from Clean Water Action, the California Marine Sanctuary Foundation, Marine Applied Research & Exploration and Outdoor Outreach. Among our eight meetings, I particularly enjoyed talking to Assemblyman Mark Stone of Santa Cruz, an ocean champion who sponsored a Coastal Commission Transparency bill (AB 2002) to make lobbyists meeting with members of the commission register and disclose their activities and clients so the public knows what’s going on. This bill was introduced following a 7-5 closed-door vote by the Commission’s political appointees (including all four of Governor Brown’s) to fire Executive Director Charles Lester on February 10 (see Blue Notes # 143). Lester had been carrying out the environmental protection and public access mandate of the Coastal Act when he was canned. And while California Secretary for Natural Resources John Laird told me, “I do not detect a weakening of the commission coming out of this (firing),” no one else participating in Ocean Day seemed to agree. 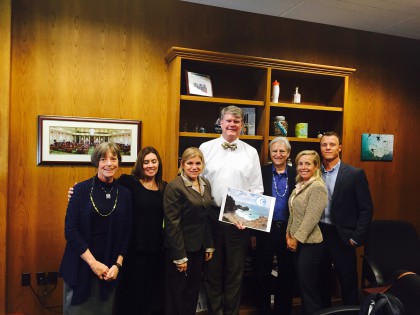 Other issues raised included marine debris and plastic, science study and enforcement for California’s statewide network of 124 marine protected areas, and water use including sewage recycling (favored) and desalinization (three bills that promote big industrial plants that fail to address environmental risks were not favored).

Like California, Florida folks have held several Statehouse Ocean Days in Tallahassee. I think it would be a great idea if ocean advocates in other states such as Massachusetts, Texas, Oregon, Alaska and Hawaii were to follow suit. Really I think every state should have a citizen Ocean Day at their statehouses since when it comes to things like oxygen, weather, climate and food security every state is a coastal state.

In the wake of another successful San Francisco International Ocean Film Festival the San Francisco Green Film Festival will be highlighting several ocean-themed movies that Blue Frontier is helping sponsor including ‘Freightened’ about the challenges of global shipping which will have its world premier on April 16th at 5:45 PM at the Roxie Theater and ‘Of the Sea’ which will premier April 17 at 3PM also at the Roxie Theater about the plight of California’s fishermen and women and the living resources they depend on. For more on the SF Green Festival go to: http://www.greenfilmfest.org/festival 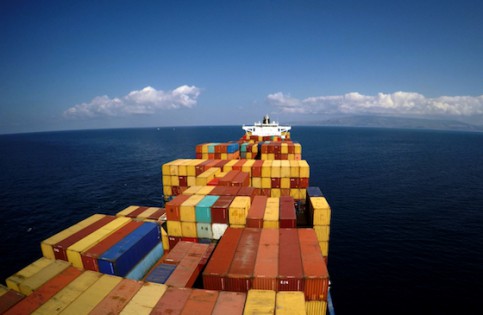 As a reminder, this year’s Benchley Awards will take place at the Monterey Bay Aquarium on the evening of Friday May 20. A public forum on ‘California and the future of the Pacific’ including two 2016 Benchley winners, Dr. Barbara Block of Stanford and Imperial Beach Mayor Serge Dedina of San Diego, will take place the following morning at the Asilomar conference grounds followed by other ticketed events.   To buy Benchley tickets or learn more about the 9th annual ocean awards go to: peterbenchleyoceanawards.org

Ferries to the People 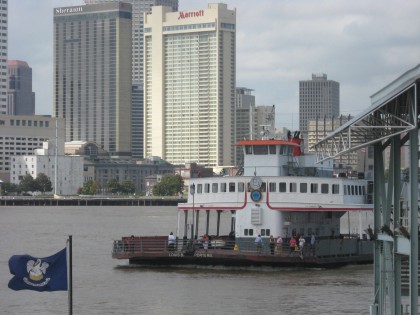 Seattle does great ferry. Washington State has the largest ferry system in the U.S. Every day tens of thousands of people, their cars and bikes, take to the waters of Puget Sound as commuters. The Washington State Ferry system carries over 10 million vehicles and 23 million people a year.

Where I live on the San Francisco Bay there are also a growing number of commuter ferries and routes though not as many as before they built the bay bridges back in the 1930s. As we return to the water I’m impatiently waiting for the San Francisco Bay Ferry Authority to begin operations between my town of Richmond and San Francisco promised for this year, next year and now 2018.

Meanwhile in New York City where 80 percent of the Big Oyster is unconnected to the U.S. mainland (except by bridges and tunnels), Mayor de Blasio just announced that the Hornblower company has been selected as the operator for a new Citywide Ferry Service starting next year with prices competitive with the NY Subway system. Kudos to our friends at the Waterfront Alliance and CEO Roland Lewis who was at Pier 15 with the Mayor. The Alliance has long promoted expanded safe and environmentally friendly maritime transportation for the city. Also Kudos to City Councilmember Donovan Richards of Far Rockaway who was there, and also with us at last springs Blue Vision Summit and this fall’s Sea Party event at the Explorer’s Club. He’s a strong advocate for dealing with the threat of sea-level rise having seen what Super-Storm Sandy did to his Queens constituents. By reconnecting with the wonders and benefits of their waters, New Yorkers are more likely to begin the necessary process of preparing and adapting to the threat of sea level rise that is now projected at 4-6 feet by the end of the century. This will leave major cities like New York and Shanghai at great risk of flooding and leave others like Miami and Bangkok pretty well doomed to become something other than major cities. 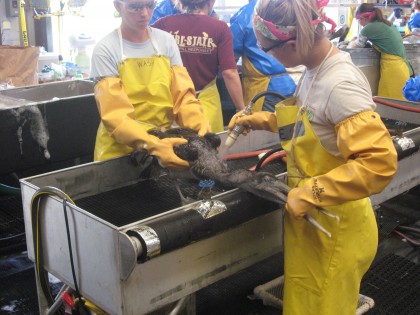 Favorite quote of the month:

“We heard from many corners that now is not the time to offer oil and gas leasing off the Atlantic coast. When you factor in conflicts with national defense, economic activities such as fishing and tourism, and opposition from many local communities, it simply doesn’t make sense to move forward with any lease sales in the coming five years.” – Secretary of Interior Sally Jewell

“Or ever!” – Your friends at Blue Frontier

If you enjoy the Blue Notes newsletter please consider making a tax-deductible charitable contribution to Blue Frontier to help us continue our work at: http://www.bluefront.org or send a check to: Blue Frontier, PO Box 19367 Washington D.C., 20036.