Climate Shock & the Wonders of Palau

At the beginning of June I visited the southern Sierras in California where the news is stark. Here’s a photo I took where half the pines are dead across the landscape from climate change – i.e. – four years of drought, fire and pine beetle infestation. 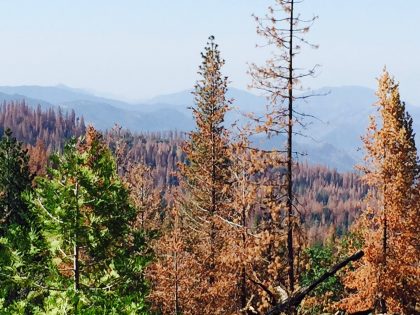 A Forest Service official in her 35th fire season said, “This is beyond our worst nightmare. No one ever thought we’d lose most of our pine forest.” One of the Forest Service’s scientists we met added that he’s switching his studies from Fishers (a forest weasel) and the mountain lions that prey on them (as well as the cartel pot growers that poison them) to how wildlife in general will adapt to climate change, a change that could cause the Sierra and other regions to morph into new types of scrubland and forests that are more adapted to a warmer, dryer world. Down on the San Joaquin valley floor below the Sierras the temperature never dropped below 100 degrees that week. 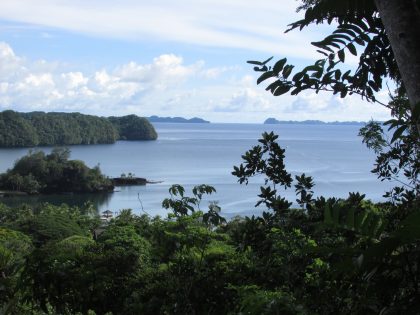 That’s why it was such a pleasure and reassurance to me to spend June 8-19 in the island-nation of Palau. Most of our time was spent on or under its pristine waters diving among healthy coral reefs, none visibly impacted by the global coral bleaching event now underway elsewhere (see Blue Notes # 146). Palau alone has 400 species of hard corals and 300 species of soft corals along with some 1,300 fish and other marine life species. Some of the abundance I saw with my dive buddy David Schwartz included huge fan and cabbage corals, sharks, rays, pilot whales, turtles, jacks, barracuda, parrot fish, napolean wrasse, sea snakes, groupers, puffers, lion fish, unicorn and squirrel fish, angelfish, sweetlips, octopus, giant clams and of course Nemo (anemonefish) and Dory (blue tang). 80 percent of Palau’s shark enhanced waters (never shark infested) are protected in a no-fishing reserve larger than the state of California. To recap, the diving was great, the corals healthy and diverse, the people as warm as their waters, and only the triggerfish bite (she got me in the leg – here’s the perpetrator’s photo). 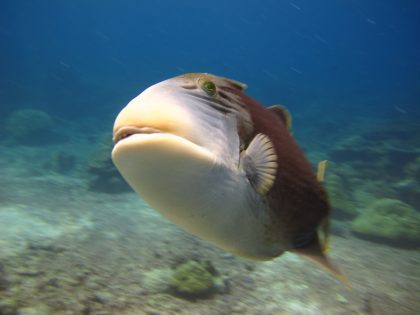 We did take one day off of diving to present the Peter Benchley Ocean Award for National Stewardship to President Tommy Remengessau Jr. of the Republic of Palau on behalf of myself, award co-founder Wendy Benchley and our selection committee. BTW – The call for nominations for the 2017 Benchley Ocean Awards opens on Monday, August 2, 2016 and remains open until Friday, November 18, 2016. For more information on nominating an ocean hero in one of eight categories go to peterbenchleyoceanawards.org.

Although Palau has escaped much of the coral bleaching that’s hit other parts of the world I asked President Remengessau about other impacts they’re feeling from climate change. 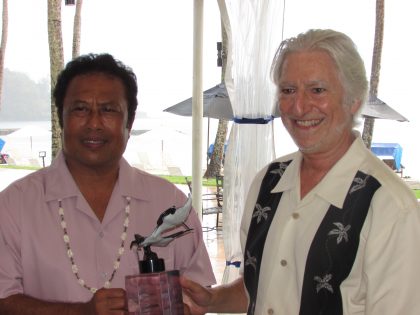 “Sea level rise is a challenge for us,” he said. “We have low-lying atolls and agricultural lands that have been flooded by saltwater. We have low-lying atoll communities threatened by the rising sea level.   It doesn’t help that global warming is creating unpredictable storms, typhoons and what have you. All of these are happening here in Paradise and the only way we can begin to address the long-term solution is for the world community to begin to stop what’s contributing to this problem.”

I also asked about what other countries can do to follow Palau’s lead in protecting most of their ocean as a biological reserve for future generations.

“The future of the world is really bleak if no nation of the world will take a concerted effort to set aside a portion of their ocean as a sanctuary,” he warned. “I’m happy now that the United States is talking about a 10% target.” 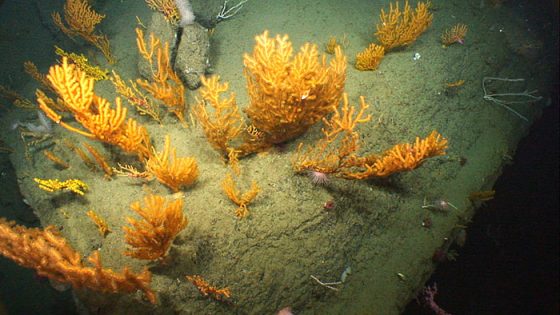 Presently, while there are some impressive marine monuments in U.S. Pacific waters west of Hawaii (established by Presidents Bush and Obama), less than 1 percent of U.S. continental waters are fully protected. There is, however, hope that President Obama will change that before leaving office.

I was on an expedition off New England with Woods Hole Oceanographic Institution on 9/11. We were too far offshore to see the attack on TV though we were able to follow it on the radio. That night I watched some of the video taken by cameras aboard the submersible Alvin. These images were taken 4,500 feet down in the dark, crushing depths of Oceanographer Canyon. There were beautiful branching deep-sea corals in yellow, brown, and white, also deep sponges, cutthroat eels, rattail fish, red crabs, luminescent purple shimmering squid, and other life abundant amid the marine snow (organic detritus falling from above). Someone then told me we had gotten TV reception and I went to the lounge on the fo’c’sle (foreword deck) to see. Through a weak and snowy signal we saw our first images of the jetliners hitting the World Trade Center towers and the towers coming down.

For the rest of my days I’ll be stuck by those contrasting images of what we’re capable of as a species, from exploring and discovering new life in the most remote and challenging part of our ocean planet, to using modern technology to carry out mass murder in the heart of a great city.

Sixteen years later the “War on Terror” has morphed into a war without end while our technologies have expanded to include commercially viable deepwater fishing, oil drilling and ocean mining. A few years after 9/11 I had a choice to return to war reporting or launch Blue Frontier. My thought at the time is we’ll probably always have wars but we may not always have living reefs or healthy seas.

These same concerns have inspired a new coalition of marine conservation groups including NRDC and the Conservation Law Foundation that are calling on President Obama to establish the Atlantic Ocean’s first National Marine Monument. This would protect Oceanographer and four other undersea canyons off New England along with four nearby Sea Mounts (undersea mountains) that between them represent a unique deep water version of Palau, full of slow-growing coral gardens, sponges, crabs, squid and upwelling waters that feed both small fish like mackerel, big billfish and sharks and great whales including the endangered Right Whale. For more information on this effort to bring protection to New England’s Coral Canyons and Seamounts Area visit here.

Margo goes “Down the Mississippi…

…to the Gulf of Mexico.” At least that’s how the Jimmy Driftwood song “Battle of New Orleans” goes. Starting in August, Blue Frontier’s Field Organizer and Explorer Margo Pellegrino will complete the second part of her New York to New Orleans one-woman outrigger paddle that started last summer on the Hudson River, then through the Erie Canal and Across the Great Lakes. This summer’s circuitous paddle will take her out of Chicago via the Sanitary Canal. Then the Des Plaines River, the Illinois, the mighty Mississippi then back upstream on the Ohio and Tennessee into Kentucky Lake, then down the Tombigbee Canal to Mobile Alabama and along the coastal bays, bayous and estuaries to New Orleans. 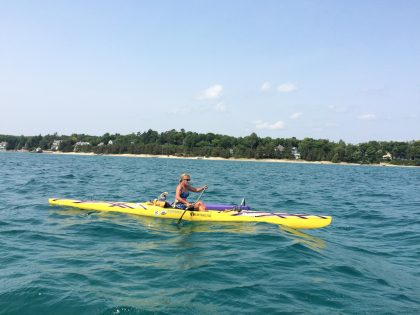 Sure it’s an adventure but it’s also about campaigning for clean water and helping out local organizations along the way working on local issues from water quality and establishing blue waterways to healthy coasts and oceans. After linking various watershed, riverfront and coastal groups in the common cause of clean water we hope Margo will lead a flotilla to DC next spring for our next Blue Vision Summit. To learn how you can support Margo on her journey check out her blog! 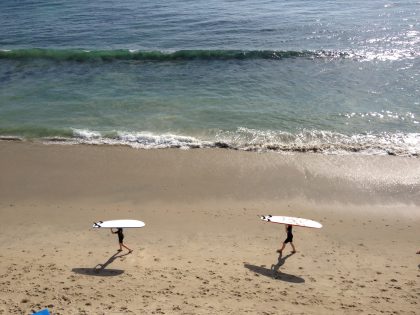 The paperback edition of my book The Golden Shore – California’s Love Affair with the Sea is coming out this fall with a new introduction by Ted Danson and a new updated epilogue. Unfortunately, while I still see California as a large-scale model for how to grow solutions faster than the problems facing our ocean planet, the three years since the hardcover edition have seen some unfortunate turns. In those three years California has experienced a pipeline oil spill in Santa Barbara that dumped Exxon oil back into the ocean, a pro-developer coup against the leadership of the Coastal Commission (one of the world’s leading environmental protection agencies) as well as the cascading collapse and poisoning of marine organisms and ecosystems. This collapse has lead to starving sea lion pups, wasted sea stars, toxic delay of the commercial crabbing season and northern Kelp forests turned to urchin barrens due to ocean warming linked to El Niño and climate change. While some recovery is expected it’s still frustrating to see California, which has been a leader in climate action, have its ocean life compromised by other peoples’ energy and pollution choices plus saltwater special interests on its own shore.

Still I find hope in some of our victories from a local headlands saved from a Casino where Blue Frontier’s Citizens for a Sustainable Point Molate project is now bringing high school classes from our underserved Richmond community to connect with their waterfront heritage to a proposed new Chumash Heritage National Marine Sanctuary north of Santa Barbara.

Plus this week it was announced the last of our coastal nuclear power plants, Diablo Canyon, would shut down in the next decade as we move from a fossil & nuclear past to a clean green (and blue) energy future. Mostly when things go bad though I find new inspiration in grabbing a wetsuit and heading back out into the water, almost anywhere along California’s Golden Shore. To pre-order the paperback from its new publisher go to www.newworldlibrary.com there are even bulk order discounts for non-profit groups.

Every two years the marine conservation community comes together in Washington, D.C. for our Blue Vision Summit. Four days of action and education: strategizing and meeting with policymakers to turn the tide for our public seas. In the spring of 2009 the Blue Vision Summit helped spur the incoming Obama Administration into launching a National Ocean Policy and lobbied congress to support ocean conservation. By last year’s 5th Blue Vision Summit we were able to hold the largest Ocean Conservation Lobby day in history that helped pass a bipartisan pirate fishing bill as well as launch a national campaign to stop new offshore drilling plans for the Arctic Ocean and Atlantic coast that were subsequently defeated through citizen action. 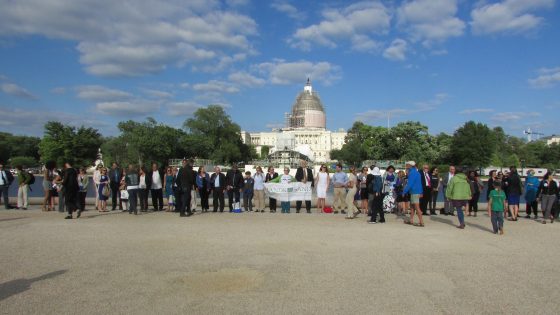 Next spring we’ll reconvene for the 6th Blue Vision Summit to bring a new administration a new ocean leadership agenda that, based on our initial planning call, might include an end to offshore oil drilling, a commitment to coastal protection against rising seas and an expansion of monuments and sanctuaries for key marine habitats essential to the restoration and health of our ocean, jobs and communities, both human and wild. If you’d like to be a sponsor or help in planning for next spring’s summit please reach out to us at info@bluefront.org.

Even a few clams 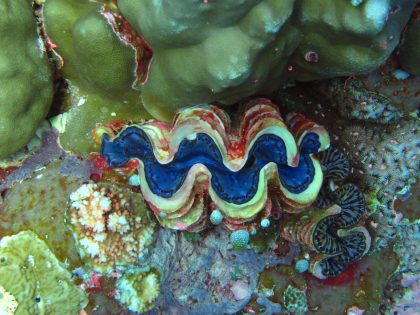 What is Your News?

Please send us your breaking news from across the nation and our blue planet. This will help us in building the networks of activism and media needed to communicate the wonder and the warnings about our salty blue frontier at risk. If you have news you would like to submit, please email us at info@bluefront.org.