Join Us for the 6th Blue Vision Summit May 9-11 in Washington, D.C.

Rise Up for the Ocean 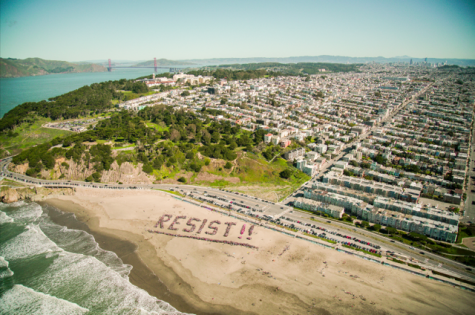 Since its rocky launch in late January, the Trump White House brand and its Republican supporters in the House and Senate have been advocating for new offshore oil drilling, reduced runoff pollution controls, gutting of a sound fisheries law (“If it’s not broken, smash it!”), crippling of climate change initiatives and defanging of the Endangered Species Act among other terrible ideas that could impact our public seas. Still, for some Republican members of Congress such as Carlos Curbelo of Florida, Mark Sanford of South Carolina and Frank LoBiondo of New Jersey, protecting our coasts and ocean remains a nonpartisan issue. For my take on the major environmental threats likely to emerge under President Trump check out my story in the February issue of The Progressive magazine.

The Days of My Life

Luckily 47 more months of a Trump administration doesn’t seem that scary when looked at in a geological timescale.

I am regularly unnerved when I measure my own life against the state of our blue world. When I visited the New York World’s Fair at age 13 there were just 3 billion people on the planet. Today there are 7.5 billion, a population bomb that keeps on booming. Global shark populations have collapsed since I saw my first wild shark in Key West at age 15. At the time we shut down my campus during a national student strike to protest President Nixon’s invasion of Cambodia when I was 18-years-old in 1970, there were twice the number of wild animals in the world as there are today. 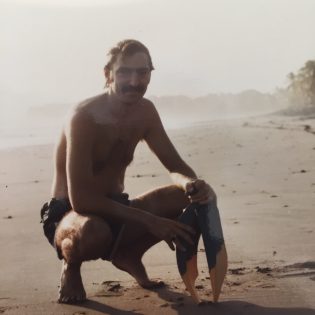 Since working as a private investigator at age 34 there has not been a single month that has dropped below the median average temperature of the 20th century. The last three years have been the hottest since recordkeeping began in the late 19th century. When I was 50-years-old and my ocean policy book Blue Frontier was published scientists didn’t understand why the atmosphere wasn’t heating even more rapidly as their computer models suggested it should. It was only in the following years that they realized much of our anthropogenic carbon was being buffered by the ocean and converted into carbonic acid. Today the impacts of ocean acidification are being felt globally with the shellfish industry first to suffer economically. We used to think the ocean was too vast for us to seriously impact it. Now we’re changing its very chemistry in ways that could prove catastrophic.

60 Million years ago during the Paleocene era a meteorite hitting earth caused the planet’s 5th mass extinction event. Now our species has given its name to a new geological era, the Anthropocene, the age in which human activity has become a dominant influence on planetary processes and is driving the 6th great extinction.

Personally I don’t plan to live my human existence without strongly resisting this trend, which I think we can. In the last century we overcame two seemingly insurmountable existential threats – the rise of global fascism under the Nazis and the Nuclear Balance of Terror during the Cold War that could have taken out most of the planet’s more complex life forms. That’s not to say that the threats of fascism and nuclear weapons have been eliminated, recent events suggest otherwise. Still there’s a sound argument to be made that we can grow ecosystem-based solutions faster than the problems we now face and that in saving and restoring plankton, sharks and sea turtles we can also save ourselves.

California and Rhode Island (“The Ocean State”) are just two examples of good role models for protecting and restoring our coasts and ocean.

In California I’ve been stuck in traffic on Highway One and looked out to sea to see pods of dolphins making better time than I was. Much of our state’s marine wildlife is coming back thanks to wise decisions first taken 30 and 40 years ago. With almost 40 million people and the world’s sixth largest economy, our Golden State is a shining example of how we as a species can improve ourselves and our natural surroundings recognizing that our economy is a fully owned subsidiary of our environment.

On March 14 California will have its annual ‘Ocean Day’ citizen lobby and celebration at the Statehouse in Sacramento with support from Environment California, Surfrider, the Monterey Bay Aquarium and many others. This year it will focus on three areas: Guaranteeing coastal access, addressing offshore industrialization and promoting the state’s new network of Marine Protected Areas (MPAs). As part of Ocean Day Blue Frontier will distribute over 150 copies my book, ‘The Golden Shore – California’s Love Affair with the Sea’ to every State Senator and Assembly member as well as leaders of Governor Brown’s administration. The book both describes how California has gotten so much right while also highlighting new and emerging threats including sea level rise, ocean warming and acidification.

After our state lobby in March I expect a number of California Ocean Day attendees will join us again on the other side of the Continent for the Healthy Ocean Capitol Hill Day citizen lobby in D.C. on May 10 during the 6th Blue Vision Summit May 9-11. Blue Vision will be the first large gathering of ocean advocates from across the nation since the 2016 election. This year the threats and challenges are not only on our coasts and in our waters but also in the halls of power. Now, more than ever, we have to mobilize and commit our lives, our fortunes and our honor to restoring the blue in our red white and blue. Lives and communities, both human and wild, depend on our willingness to resist attempts to liquidate our public resources for private profit.

Three themes of this years Summit include; Ending offshore oil by 2030, finding ways to end plastic and other forms of ocean pollution, and building coastal resiliency in the face of rising seas. Major outreach for the Summit will be directed at expanding youth participation and leadership, and increased diversity including geographic diversity with greater involvement of the inland ocean movement.

A rough breakdown of the Summit schedule to date:

May 9th at George Washington University will be a day of outstanding presentations, panels, networking, and education with theme dinners focused on continuing the day’s conversations.

May 10th is our Healthy Ocean Capitol Hill Day – the biggest citizen lobby for the Ocean ever held in the United States (don’t forget to wear blue!) followed by a State delegations debriefing and celebration at Mott House.

How we can again win the offshore oil battle will be one of our key themes this spring, and one the public gets. Despite President Trump’s advocacy for bringing back offshore oil and coal mining, the market has already moved on. It’s not environmental regulation that’s taken coal jobs away but competition from cheap natural gas and clean energy. Depressed global oil prices have made the dirtiest and most expensive forms of fossil fuels – coal, tar sands and offshore oil – non-competitive.   The CEO of Diamond Offshore Drilling, a company that leases rigs for deepwater drilling doesn’t see any industry interest in reviving offshore operations until at least 2019 or 2020. That doesn’t mean the oil industry won’t bid for new offshore leases if offered, putting them aside for a rainy (floody and heat record-breaky) day provided the Trump administration finds a way to overturn President Obama’s decision to close off Arctic waters and parts of the Atlantic to new drilling.   I suspect he will.   While Obama was playing chess in his final days Trump is playing knock over the board and kick the table. 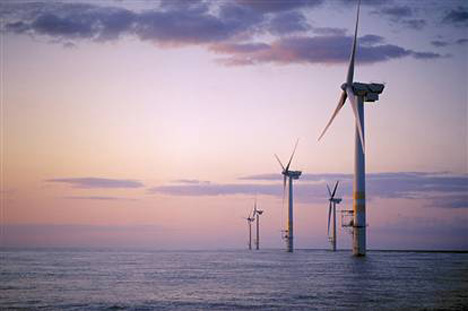 So it’s up to the ocean community to revive the Sea Party and all the other grassroots efforts by Oceana, Surfrider, Sierra Club, Greenpeace, Clean Ocean Action in NJ, SODA POP in South Carolina, Assateague Coastkeeper in Maryland, legal and policy actions by NRDC, local mayors and chambers of commerce, etc. that helped turned things around in 2015 and 2016. We also need to learn from our past victories of the 1980s and stand in solidarity with the folks in the Gulf of Mexico including Gulf Restoration Network, the Louisiana Bucket Brigade, the Houma Nation, Green Army and others who also marched against new lease sales last March because even in Louisiana and coastal Texas people are tired of having their waters and their health be the national sacrifice zone for the fossil fuel industry.

Plus as a movement it’s time we put an end to the lie about jobs in the oil and pipeline industry. Solar is now the fastest growing jobs generator in the energy sector, growing almost 25% between 2015 and 2016 while thousands of workers were being laid off in the oil and gas industry. With 373,000 solar jobs according to an industry report, solar now outstrips the natural gas (fracking) boom in terms of employment and has 3 times the number of workers as the coal industry.   Add about 100,000 jobs in the wind sector and clean job creation is closing in on the half a million now employed by Big Oil. But unlike fossil fuel jobs, solar & wind (average pay over $25 an hour) don’t go through booms and busts, or give their workers black lung and cancer, or disrupt the global climate system. Plus there’s still huge potential in U.S. offshore wind. This past year saw the first U.S. commercial wind turbines installed off Rhode Island.   The Block Island Wind Farm can generate up to 30 Megawatts of power. The European Union by contrast already has 12,631 Megawatts of installed offshore wind power.

No matter how much the President and his Trumplicans in Congress try and tilt the free market to favor fossil fuel the winds of change are blowing. Today Elon Musk may be the new John Rockefeller, promoting the battery technology for clean energy that will drive the next energy revolution just as JR once consolidated the ‘rock oil’ (petroleum) boom that displaced whale oil as a driver of the U.S. and global economy in the late 19th and early 20th centuries.

It can’t come soon enough for our warming, rising and acidifying seas and all the communities, human and wild, that depend on them. See you in May!

Lost to the Sea 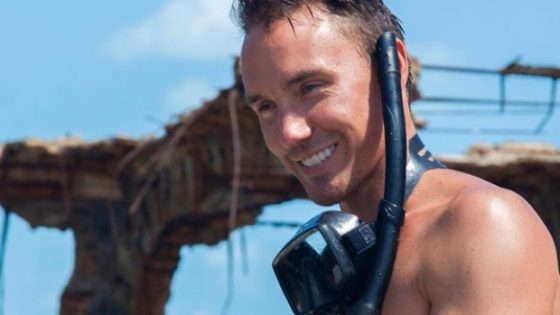 The ocean conservation community and the world’s endangered shark population lost a champion in the waters off of the Florida Keys on January 31 when 37-year-old ‘Sharkwater’ director Rob Stewart died in a diving accident. He was filming a sequel, ‘Sharkwater Extinction.’ Stewart and another diver were doing sequential deep dives to over 200 feet using technical diving rebreather equipment that he had just gotten certified on. The Coast Guard is now investigating the tragedy. Our condolences go out to Rob Stewart’s Family and loved ones.