Rage For A Dying Reef 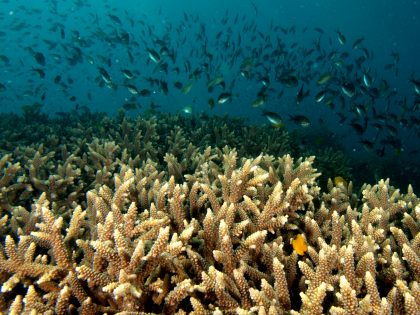 I first dove the Great Barrier Reef in 1990 having dreamed about it since childhood. It was all I’d hoped for; warm clear waters alive with big critters including giant potato cod (grouper), blue-green Napoleon wrasse, reef sharks and multihued parrotfish, eating coral and pooting sand. There were coral canyons and bommies and walls with branching elkhorn, staghorn and fan corals. They sat in brown, green, red and purple, crevices full of moray eels and shelves of geisha like lion fish along with red and blue spotted coral trout amidst a confetti of colorful smaller fish including clown, damsels, sweetlips, chromis and Moorish idols. The giant clams with their beautiful soft mantels of purple, green and red algae-covered mollusk skin open like fat lips to the sea seemed to have calmed down considerably since my early TV viewing, when they’d trap Sea Hunt’s Lloyd Bridges by the leg and try to drown him. The days we spent on that dive boat reminded me of an Isak Dinesen quote, ‘The cure for anything is salt water – sweat, tears or the sea.’ 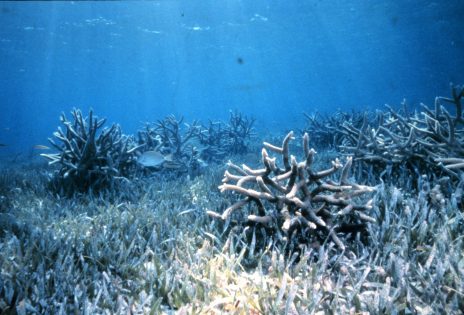 A decade later I returned to Australia to report on coral bleaching for a book ‘”Feeling the Heat – Dispatches from the Frontlines of Climate Change.” Heat stress from a warming ocean combined with El Niño cycles that periodically warm and cool the eastern Pacific were turning coral reefs wedding cake white while slowly starving them to death. Along with seeing my first bleached coral, I described a reef that had just died and where, among broken fields of coral rubble and silt, I found a burrowing clam encased in dead rock; its rainbow mantle’s still healthy algae giving it the look of a fashion model posing in a cemetery. The El Niño years of 1997-98 and 2002-2003 saw the first global coral bleaching events that impacted reefs across the planet. Since 2015 we’ve been in the third event that’s also the largest and most extended. Not surprisingly it’s taking place during the hottest years on record (2014-2016).

This past week a new cover story in Nature reports that huge sections of the Great Barrier Reef are now dead from bleaching. The paper documents vast coral death in 2016 along a 500-mile section of the reef. Where we took our dive boat trip in 1990, aerial surveys show that 67 percent of the corals are dead with some patches over 80 percent gone. Other parts of the northern reef have seen less dramatic die offs averaging 17-35 percent. Few marine scientists now doubt that most of our coral reefs will die off due to rapidly accelerating climate change in the course of this century.

“We didn’t expect to see this level of destruction to the Great Barrier Reef for another 30 years,” Terry P. Hughes, one of the paper’s authors told the New York Times, one of the few U.S. media outlets to do any serious reporting on this global catastrophe.

So we’ve now reached the stage of triage – working ever more intensely to save what we can. Our 2011 Peter Benchley Ocean Award winner for Science Dr. Steve Palumbi of Stanford is going to be in Palau this spring to study the genetics of corals that appear more resistant to heat strain. At the Blue Vision Summit the Coral Restoration Foundation will be leading a panel examining the possibility of large scale farming and planting of new coral. Ecosystem restoration projects like this one will have to become a major focus of governments and civil society groups during the rest of this century as ecological collapse leads to economic and social collapse.

Unfortunately our immediate need is a rapid transition off of fossil fuels that drive climate disruption. Instead we have a new administration and Congress that claims coal is the future and climate change is a myth. That skewed perspective is reflected in the new Trump budget.

Is This Budget Good for Fish?

As if our Ocean were not in enough trouble…

In the newly released Trump proposed federal budget big increases for the military and Border Patrol are matched by drastic cuts for almost every other part of government. Amidst growing public concern over cuts to the National Institutes of Health, Corporation for Public Broadcasting (Big Bird) and other mainstream agencies few have noticed that the budget also unravels the blue in our red, white and blue.

Some of the following I wrote in a mass email we sent you a few days ago but it’s worth repeating. The Ocean will lose under this budget both in terms of our knowledge of how our blue world functions and in the elimination of programs that keep our public seas from becoming public toilets.  Among proposed cuts:

The 12th annual Ocean Day California on March 14 was a needed moment of salty sanity and good eats. It was launched in 2005 as a way to bring blue advocates to the State Capitol in Sacramento to educate legislators on the latest issues of concern along California’s coastline. Blue Frontier was among 15 sponsors this year along with Azul, Environment California, Surfrider and others who provided much of the organizing support. Statehouse team leaders also distributed copies of my book, ‘The Golden Shore” to members of the State Senate and Assembly while the Ocean Protection Council distributed additional copies to the Brown administration. 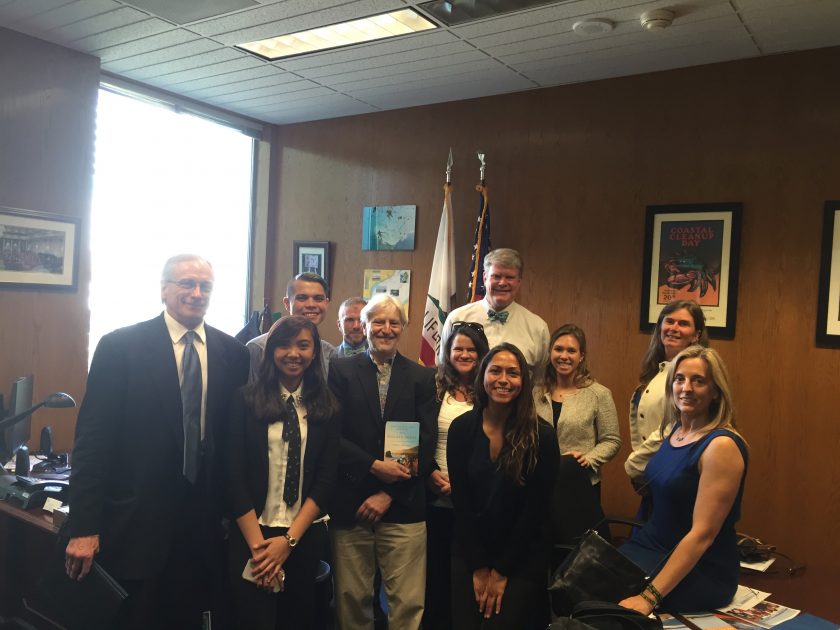 Close to 100 people from around the state held 90 meetings with their elected representatives to discuss bills such as AB 18 that would fund “Clean water, Climate, Coastal Protection and Outdoor Access for All,” to the tune of 3.5 billion. Other issues included plastic pollution, water conservation and enforcement on and below the state’s network of underwater parks. During a luncheon Secretary of Natural Resources John Laird explained how the state will “legislate and litigate” to defend its environmental standards, recognizing the challenges will also be monetary as the Trump administration cuts off federal funds for coastal protection and climate change.

That evening the Monterey Bay Aquarium held a sustainable seafood gathering at the stately Sutter Club to highlight how good fisheries and sea farming practices are also good for the economy and our diet. During our earlier citizen lobby I joined 9 colleagues for a series of meetings including one with Assemblyman Mark Stone of Monterey (see photo – look for bowtie) who is one of the state’s ocean champions and a co-chair of its Environmental Caucus. One of his bills (AB 319) would require a leash between plastic bottles and their plastic lids that get thrown away more frequently.

Attention – Please send us reports on Ocean Actions in your state for future Blue Notes. info@bluefront.org

The Blue Vision Summit is just seven weeks from today May 9-11!

Before it arrives there will be two other opportunities to express your belief in observable and measurable reality based on science, including climate science.

On Earth Day, April 22 there will be the March for Science endorsed by, among others, the American Association for the Advancement of Science (AAAS) the most prestigious science organization in the United States. Marches will take place across the nation and internationally. For more information go to: https://www.marchforscience.com/

Then on April 29 there will be the People’s Climate March on Washington (“for climate, jobs and justice”) that will include an Ocean Contingent. For more on that click here. 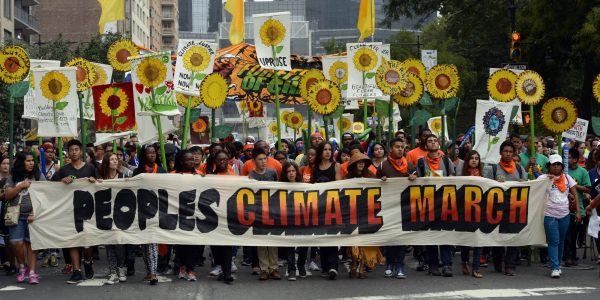 Marchers make their way across Central Park South during the People’s Climate March on September 21 2014, in New York. AFP PHOTO/Timothy A. Clary

And of course May 9-11 will be the sixth biennial Blue Vision Summit that will be the first large gathering of ocean conservationists since the election, followed by the tenth annual Peter Benchley Ocean Awards that celebrate ocean solution leaders. 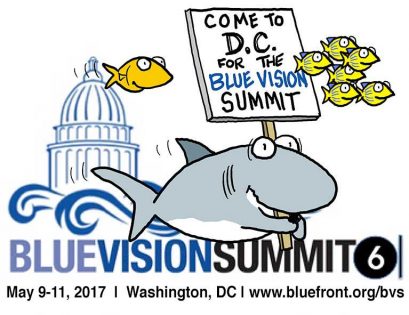 So we’ll have two days and a morning to develop effective strategies for the next four years during BVS, followed by an inspirational honoring of leading ocean figures at PBOA.

To register and learn more about the Blue Vision Summit, visit our website!

To attend the Benchley Awards go to: www.Peterbenchleyoceanawards.org