Thought we would share a first brief video of this spring’s opening volley of ocean resistance at Blue Vision Summit 6. This rough-cut two-minute short with Senator Cory Booker and the NJ delegation as well as some of my own thoughts on our next steps was produced by Wingspan Media. In the coming weeks we hope to post many of the presentations and panels that took place at Blue Vision along with more Hill Day footage and a good overview documentary look at the Summit. 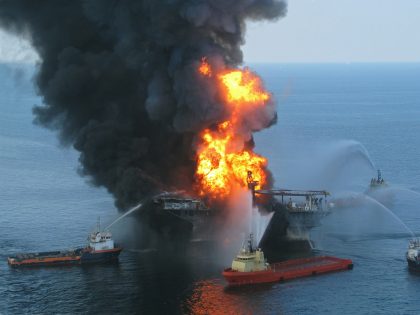 Has Donald Trump launched World War Blue? Forget obstruction of justice, how about obstructing the crucible of life on our ocean planet? President Trump’s withdrawing the United States from the Paris Climate Treaty may lack the emotional punch of say Nazi panzer tanks rolling into Poland in 1939, but in terms of global impacts, they may be more closely linked than one would think.

After all, there were two existential threats to the world in the twentieth century; the global rise of Fascism and the nuclear balance of terror between the United States and the Soviet Union. The good news is we survived both.

However, today’s greatest global threats have transitioned from guns and bombs to cars, cows and carbon. In an increasingly populous and interdependent world, major threats are no longer limited to armed conflicts between nations but include a range of unknowable risks from stateless actors, industrial disasters, and unintended consequences of large interventions in markets and the natural world.

Despite the close calls of the past, it remains unclear whether or not our present state of civilization can endure the threat from fossil fuel driven climate disruption and its effects on the planet’s sixth extinction event now underway. The greatest impacts are being felt in our seas and along our coasts from melting ice to sea level rise, warming waters, coral bleaching and ocean acidification. Not to mention a warmer, more acidic ocean also holds less dissolved oxygen; another reason global dead zones are expanding both horizontally and vertically.

Unlike FDR who helped mobilize the United States to become the arsenal of democracy and win World War II, Trump is surrendering the United States leadership role in the only collective effort that might yet save millions of lives at risk from intensifying heat waves, wildfires, hurricanes, shrinking shorelines and drought-fed famines. Even today the UN has identified 20 million people in Africa at immediate risk of dying from war, drought and disease, the most people at risk since World War II. And this in an area also identified as facing growing water scarcity due to climate change.

Following the three hottest years on record — 2014, 2015 and 2016— and with what now looks like close to half of the Great Barrier Reef dead from bleaching, the time for action can no longer be deferred.

One example of the kind of rapid mobilization we need to respond to a global threat took place where I live in Richmond California. During World War II my small sailboat marina was the Kaiser Shipyard that produced 737 liberty ships in just four years, 1942 to 1945. Those ships were then loaded with 60,000 jeeps and tanks assembled in a converted Ford factory that is still here (however, now repurposed for local businesses including a solar panel company). Instead of the one million we annually produce today we could easily build and install 100 million solar panels in the next year or two if we had the political will to get off fossil fuels while expanding our economy. 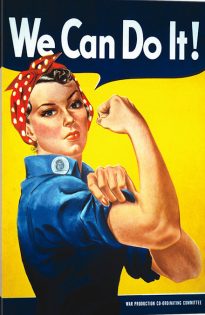 When I wrote, ‘The War Against the Greens’ a quarter century ago about the environmental backlash of the late 1980s and ‘90s, it was largely confined to the West’s “Wise Use” movement, made up of violent front groups who sought access to federally subsidized public lands for mining, timber, and cattle grazing. It was only when the prime beneficiary of the backlash shifted from hard-rock mining to the fossil fuel industry during the oil-heavy Bush/Cheney administration and later when the Supreme Court’s Citizens United ruling gave the petroleum slick Koch brothers an inordinate influence on Republican funding and primaries, did Wise Use’s anti-environmental rhetoric, including climate denial, go mainstream in the party. Trump’s quitting the Paris Accords is very much in keeping with this recent Republican orthodoxy.

However a crisis can also be an opportunity and our survival instinct as a species might yet win out. After all compared to the collective effort it took to defeat the Fascist Axis of Germany, Japan and Italy in World War II, defeating Donald Trump, the EPA’s Scott Pruitt and their Congressional backers in order to save our blue planet ought to be a pretty winnable battle. 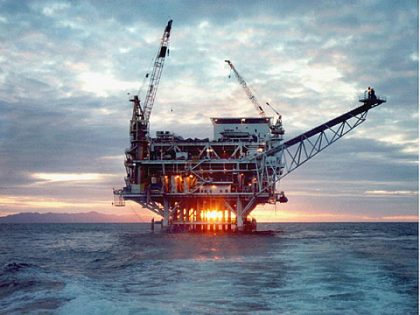 On May 31 the White House released a statement from the President declaring June National Ocean Month. It read in part,  “Today, our offshore areas remain underutilized…In the field of energy, we have just begun to tap the potential of our oceans’ oil and gas, wind, wave, and tidal resources to power the Nation.  The fisheries resources of the United States are among the most valuable in the world.  Growing global demand for seafood presents tremendous opportunities for expansion of our seafood exports.”

The depths of the ocean are nothing compared to the depths of ignorance in that statement. To reiterate: Good science tells us that we need to leave most of the known oil reserves in the ground and under the seabed, not expand offshore drilling if we’re to survive the climate crisis. Also, having finally begun to rebuild our depleted stocks of edible marine wildlife through the 2006 reform of the Magnuson-Stevens federal fisheries act, we need to focus on growing our value-added domestic fish markets and educating consumers to eat local and sustainable seafood in order to reduce consumer demand for imports. What we should not do is sell off our limited domestic resources overseas. 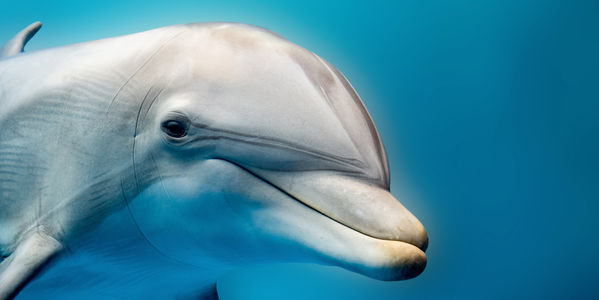 Donald Trump’s proposed federal budget includes not only major cuts to NOAA, EPA and other agencies essential to the health of our waters, but also eliminates some key agencies and programs including Sea Grant and the Marine Mammal Commission. These are programs we fought to defend at our Healthy Ocean Capitol Hill Day on May 10 as part of our Blue Vision Summit.

Based on the successful Land Grant college system of 1862 that brought the industrial revolution to American agriculture, Sea Grant, operating in 33 coastal states (including the Great Lakes), provides the kinds of university-based R&D that has helped balance our understanding of coastal and marine ecosystems with the growth of sustainable fishing, sea farming and other ocean dependent industries. From a business point of view getting rid of it doesn’t make sense.

Also, it seems like every consecutive generation is called upon to once again Save the Whales (and Flipper). Donald Trump’s budget would also eliminate the only independent federal agency dedicated solely to protecting our fellow mammals who live and dwell in and on the sea including: whales, dolphins, porpoises, seals, sea lions, sea otters, manatees, walruses and polar bears.

Created in 1972 to oversee the science and effectiveness of the historic Marine Mammal Protection Act, this 45-year old agency has done amazing work to expand our understanding of these awesome creatures through good science while also launching collaborative efforts that have dramatically reduced their deaths from drowning in fishing nets, ship and boat strikes, loss of habitat, noise pollution and other deadly dangers.

With three commissioners, a tiny staff and a budget just over $3 million— less than a penny per year per citizen, —the White House claims that this measure is meant to reduce the size of our 1.1 trillion dollar budget.  Eliminating the commission is just returning a favor to the offshore oil industry, irresponsible parts of the fishing industry and others who see whales and dolphins as a hindrance to quick and dirty profits.

Join over 50,000 others and sign the petition to save the Marine Mammal Commission which I wrote and posted with Aaron Viles of Care2.

By way of contrast, early June’s UN Ocean Conference sponsored by Sweden and Fiji reminds us that while we are battling to hold the line for our public seas here in the U.S., much of the rest of the world is growing its awareness and commitment to turning the tide for ocean health and finally beginning to address the crisis in our global seas. IUU pirate fishing, ocean acidification and plastic pollution were just a few of the issues addressed at the UN June 5-9. Here is the Ocean ‘Call to Action’ the 193 nations in attendance pledged to follow up on.

Summer of the Rising Tide 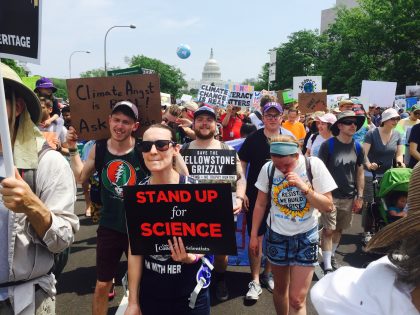 Last week saw the most successful Capitol Hill Ocean Week to date in Washington D.C. put on by the National Marine Sanctuary Foundation. It followed our Blue Vision Summit 6 and the UN Ocean Conference in a tremendous line of ocean advocacy events. So how will the Blue Movement follow up?

As far as Blue Frontier goes, this summer we will be working to rebuild our website and launch a new social media campaign including videos from Blue Vision 6. We still continue receiving positive feedback.

“It was an honor to attend the Blue Vision Summit and engage with so many Passionate and committed individuals,”

A Few Clams Would Help 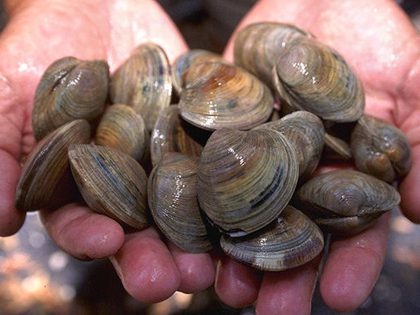 The Internet we use may be free (for now) but the cost of our rebuild is not, nor would more Blue Visions and Sea Party 2018 actions. Please consider helping us get ready for the next wave of resistance with a tax-deductible contribution to Blue Frontier.

For $100 or more we will mail you a personally autographed copy of one of my Blue Frontier books, ‘50 Ways to Save the Ocean’, ‘Saved by the Sea – Hope, Heartbreak and Wonder in the Blue World’ or ‘The Golden Shore – California’s Love Affair with the Sea.’

To quote our T-Shirt: The Ocean is Rising And So Are We! To order a shirt, email us here! 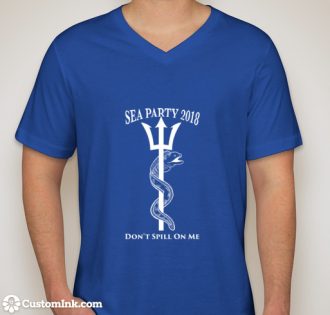 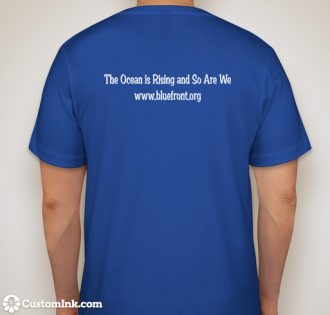 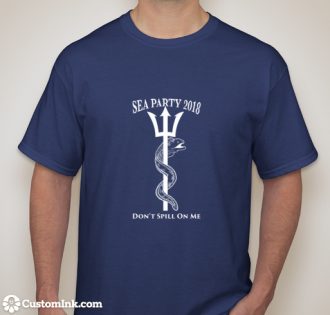 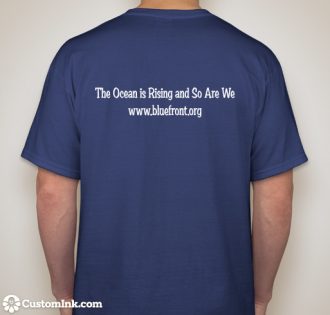