Field Notes from a Blue March 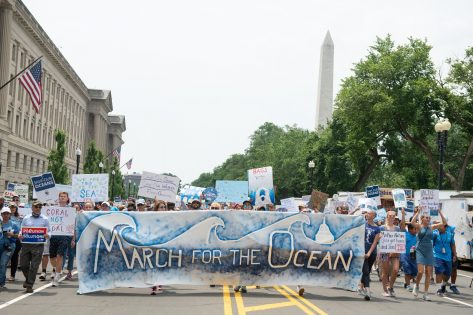 “When I first saw the event pop through my Facebook I was just so eager and excited.  I automatically started making phone calls to Brevard County, to Florida Fish & Wildlife and turtle preservation because that’s what this community is based on, the ocean,” Savana Degatina told Florida Today explaining how she came to organize a small ‘March for the Ocean’ along the beach in Indialantic Florida, south of Cape Canaveral, one of at least a hundred marches that took place across Florida and around the world June 9.  More about hers here 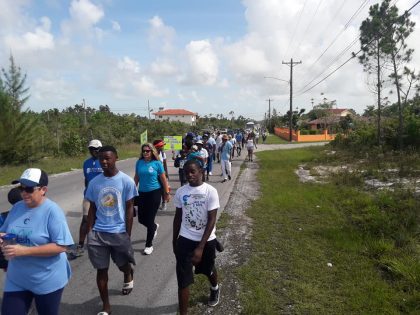 With the widespread leadership of young people and a diverse coalition of conservation and maritime organizations, M4O took a needed step – through marching and mobilizing – to generate the political will to enact solutions to offshore oil (clean energy), plastic pollution (corporate accountability), rising seas (living shorelines) and other challenges facing our blue world.

The morning started with an armada of boats –dragon boats, kayaks and a Greenpeace Zodiac – on the Anacostia River that also marked the end-of an 18-day outrigger paddle from Atlantic City by Blue Frontier’s ocean adventurer Margo Pellegrino.  You can read Margo’s blogs from her latest coastal adventure for clean water here.

Given the global reach of the march and present state of U.S. cable news perhaps it’s not surprising that the best coverage of D.C. came from a Spanish language television network based out of Iran. Check it out here

Youth Leadership in the March 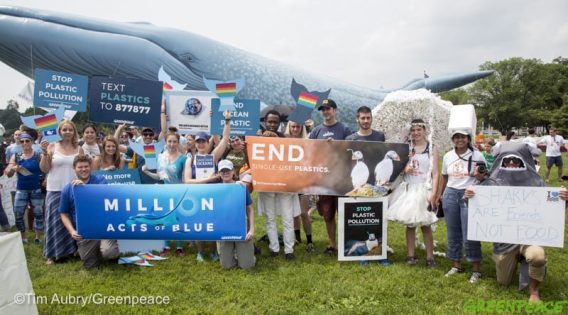 This rise up generation was well represented among the 3,000 ocean-loving people who marched past the White House chanting ‘The Ocean is Rising and So Are We,’ and ‘Red, White, Save the Blue.’  President Trump who wants to open over 90 percent of U.S. waters to oil drilling – and recently replaced President Obama’s National Ocean Policy with a pro-drilling one, in the process getting rid of all references to ocean health, conservation and climate – was not at home.  He was at the G-7 meeting in Canada refusing to sign a common resolution and tweeting that Canada’s Prime Minister was “dishonest and weak.” The Canadians had proposed the G-7 meeting focus on the ocean, climate and energy but Trump’s threats of a global trade war disrupted their plans. Still, the world’s youth were keeping their focus. 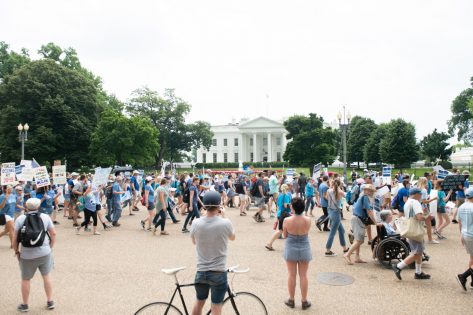 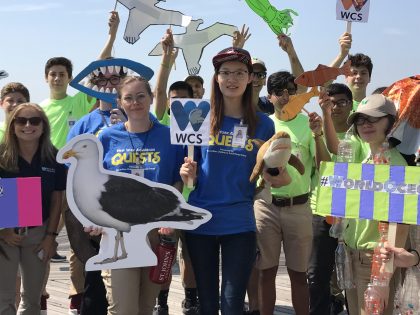 In Dun Laoghaire outside Dublin, Ireland 11-year old Flossie Donnelly led 350-400 marchers calling for an end to plastic pollution.  As she explained, “We can make a big difference to the health of our oceans by making a few small changes. Use reusable coffee cups, and drink bottles and refuse plastic straws.  We should also ask our politicians to do more to reduce plastic packaging.” 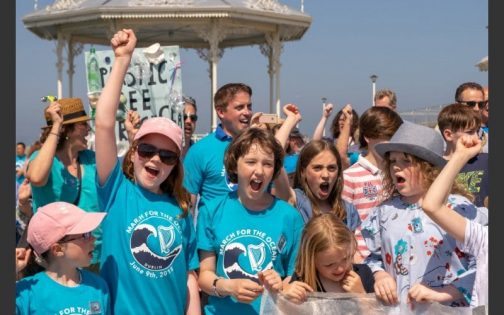 “Youths organize March for the Oceans” was the headline in Micronesia’s leading newspaper, the Marianas Variety. Their march was organized by 16-year-old Genzo Gonzales and 12-year-old Kaya Rasa.  “We take part in this activity because Chamorros and Carolinians are seafaring people. We look to the ocean as our way of life — we live from it, we fish from it, we eat from it” Genzo explained. “We would like to relay the message to everyone that we have to be aware of what is happening to our islands and our ocean, and keep them clean,” agreed Kaya.

One of my personal favorite marches took place on the Coney Island boardwalk organized by the New York Aquarium. This is the aquarium my dad took me to when I was 8-years-old and saw my first Beluga whale.  Hamilton cast member Hope Endrenyi was among the marchers and brought a poster signed by all the other cast members and why not? Alexander Hamilton created the Revenue Cutter Service that was the predecessor of today’s Coast Guard.  Among Wildlife Conservation Corps High School participants were Angela Chin, Vanesa Vargas, Julian Bauman and Yadira Huerta. 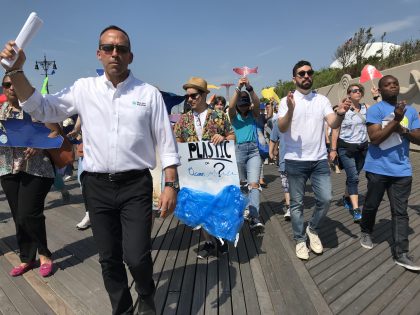 Many aquariums have now become centers of conservation education including M4O partners such as the National Aquarium, Monterey Bay Aquarium and South Carolina Aquarium that organized an M4O cleanup at the unfortunately named Mosquito Beach Marsh on James Island along with the Preserve the Gullah Task Force.  If you’re not familiar with the Gullah people look them up to learn some amazing, and ongoing, African-American coastal history from South Carolina and Georgia. And speaking of Georgia here’s WTOP’s news report on the March for the Ocean on Tybee Island, Georgia.

Also, speaking of aquariums the Shedd Aquarium provided a speaker at the Chicago waterfront clean ups put together by the Illinois Ocean Coalition, part of the Inland Ocean Coalition that helped organize several dozen marches.

South Florida News Service reported that thousands participated in the Hollywood Florida March for the Ocean.

And here’s a fun home video from that big festival and march that included a High School marching band and a mermaid spokes-whatever.

There was also a small march and paddle in West Palm Beach about a mile from Mar-a-Lago that was covered by local NBC affiliate WPTV. Read about it here and watch it here. 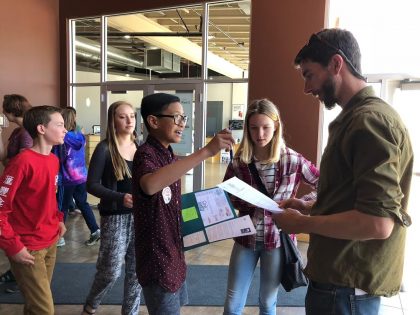 In Rio 100 folks joined the ‘Marcha Pelos Oceanos’ in support of national bills to limit or ban single use plastic. In Grand Bahama 100 people marched 4 miles to do a beach clean up.  But on Panglao island in the Philippines they took the ‘March’ part of “Baktas Alang Sa Kadagatan” (March for the Ocean) super seriously with some 65 activists from Plastic-Free Bohol hiking almost 12 miles from Tagbilaran City to the Alona Beach resort area where, joined by 100 more volunteers, they cleaned beach debris including almost 9 pounds of cigarette butts. Here are the reports from the Bahamas Weekly and Philippine Daily Inquirer 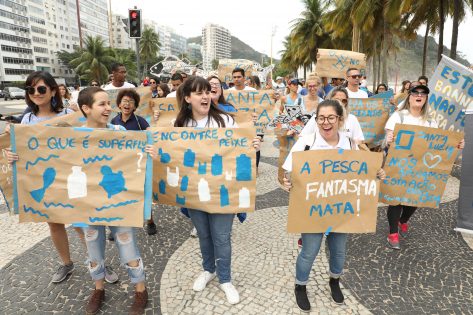 On La Marsa beach in Tunisia Pour Une Tunisie Propre et Verte (For a Clean and Green Tunisia) held a beach cleanup and plastic-free Iftar picnic to mark the end of fasting during Ramadan.  In the fishing turned tourist port of Monastir, Pour Notre Gradn Blue (Our Big Blue) held an underwater clean up in collaboration with the National Institute of Marine Science and Technology to help educate people about plastic waste and sea turtles.

Similar M4O underwater clean ups and coral dives took place in Maui, Key Largo, Key West and Gili Island Indonesia under the auspices of the Maui Ocean Center and Marine Institute, the Coral Restoration Foundation and Gili Eco Trust.  Special thanks to World Wildlife Fund, Greenpeace, PADI and Project Aware for working with some of our global colleagues. Also to photographers Theresa Keil, Elainea Emmott, Kimberly Schor and others for some of the images.

On a side note – I was impressed with the boxed waters with plastic type lids – actually made from sugar cane – provided by Earth X in Texas so that we could have a plastic free event, also the outstanding efforts by the Plastic Pollution Coalition, Parley for the Oceans and others who wanted to make sure we marched what we preached.  Also, gracias to Cliff Bars and Marine Conservation Institute (also the Ocean Foundation) for the few thousand banana, chocolate, peanut, etc. snack bars that helped energize the not too strenuous 1.7 mile march.

I also loved the sister march T-shirts produced for the London, Dublin and Rio marches (another Brazil march took place in Tamandare) where the image of the waves over the U.S. Capitol were replaced by waves overtopping Big Ben and the Millennial Wheel, an Irish Harp and Sugarloaf Mountain (hint– I wear a men’s large). 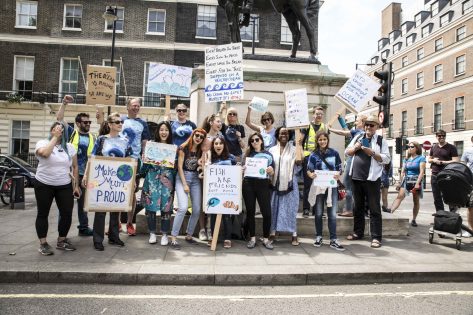 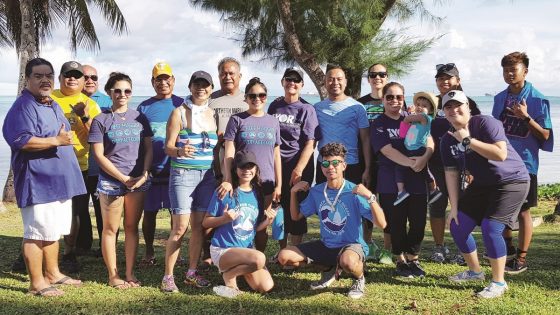 The creativity, commitment and high spirits of the many thousands of people, particularly young people, who marched around the world on June 9 in the face of existential threats both environmental and political – gives me renewed hope and a measure of guarded optimism.  In the 1970s we marched to save the whales. Now we’re marching to save it all, including the whales.

Along with March for the Ocean organizers around the nation and the world and some key media figures including Elli Kerlow and Nikki Caputo, Brick TV and Bare Tree Media, interns, volunteers, etc. we really need to thank not just the close to 200 March partner groups still listed at www.marchfortheocean.org  but the leading M4O sponsors and financial supporters including:

Parley for the Oceans

Friends of the Earth

Writers For the Sea

Fish Feel and others, some of whom chose to add anonymity to their generosity. 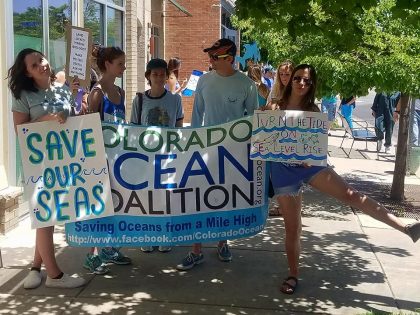 I would be remiss at this point if I didn’t ask any reader who was involved in an M4O action that I failed to mention (or don’t know about) to please forward information including descriptions, media reports, personal reports, videos and digital pictures to info@bluefront.org so we can begin to compile a more comprehensive M4O after-action report and documentary.

First we march for the ocean and then we vote for the ocean (or get your friends over 18 to vote for it)!  Former Congress member Sam Farr once told me “California is the only state where you can get elected or lose your job based on your position on offshore drilling and coastal protection.”  I don’t think that’s true any longer. Opposition to offshore drilling is widespread and bipartisan in places like South Carolina, Virginia, New Jersey, Georgia and Florida as is concern over intensified storms and flooding and the Tsunami of plastic waste, runoff fed algal blooms and other disgusting pollution.  These are things I’ll be talking about as I travel around the country later this summer and fall.

If you would like to have me speak to your community organization, on campus, in your place of business or worship (water is life) or if you’d like to get involved with our BFC ‘Sea Party 2018’ Speaking Tour feel free to contact us at info@bluefront.org or contact me directly at helvarg@bluefront.org