Triage for our Ocean 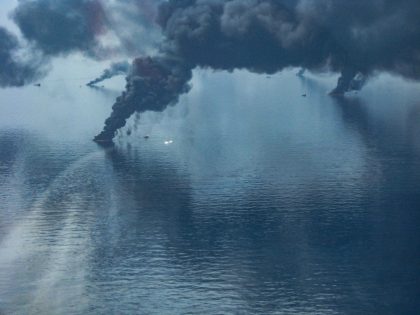 Attending the American Association for the Advancement of Science (AAAS) conference in Washington D.C. this month I was impressed with the range of presentations at the largest gathering of scientists in the world. One that struck an ominous note however was the climate session. It was here Thomas Crowther of the Crowther Lab at ETZ Zurich confirmed one of the feedback loops researchers have long worried about has now kicked in. 12-17 percent of today’s greenhouse gas emissions are being generated from the off gassing of methane from melting permafrost in the Arctic “That’s the equivalent of adding one United States per year in terms of global emissions,” Crowther warned. And as goes our climate so goes our ocean planet.

The cascading disasters facing our ocean seemed manageable when I wrote ‘Blue Frontier – Saving America’s Living Seas,’ at the beginning of this century (now updated on Kindle). Industrial overfishing for the global seafood market, oil, chemical, nutrient and plastic pollution, loss of coastal habitat needed for restoration plus the emerging signs of climate change, were already reaching critical mass. Still I saw the challenges as ultimately solvable if we just mobilized the political will and professional expertise needed.  I even went on to write another book, ‘50 Ways to Save the Ocean,’ to suggest how any person could be a part of this change.

That was then. Twenty years later, the “climate factor” looms larger than ever. We are now seeing changes in the physical nature of the ocean, its circulation, temperature, chemistry and even its color, as a result of human driven climate impacts. 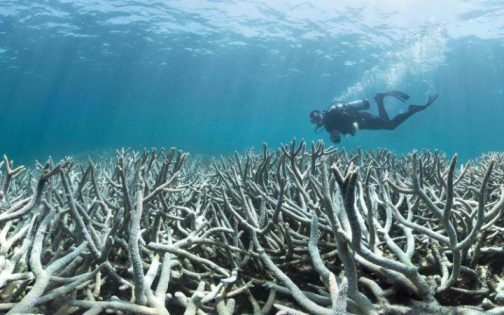 The effects of a changing ocean are everywhere in our lives. Along with driving more destructive storms, a warmer, more acidic ocean holds less dissolved oxygen meaning expanded dead zones and declining and shifting phytoplankton (algae) production. Phytoplankton make up the big “pasture” on which the marine food web feeds and that also generates over half the planet’s oxygen. Changes in the numbers of these tiny creatures is also what is likely to cause the ocean to change color by 2100, with bluer blues and greener greens. Also shifts in marine circulation and ice will continue to impact weather and agriculture, for example the increased frequency of the polar vortex dipping south into the United States and its studied link to declining polar ice.

We’re also seeing that the migratory patterns of marine wildlife are shifting both vertically—the largest wildlife migration on earth is the nightly rise and retreat of marine biomass such as krill and squid that feed near the surface in darkness—while cold water fish, lobster and marine mammals are shifting horizontally towards the poles in search of cooler waters. 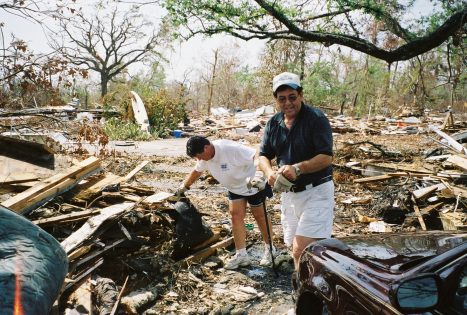 A warming ocean is also a larger ocean; warm water expands as its molecules move faster (boil a kettle of tea if you don’t believe me). That, plus freshwater runoff from the world’s melting glaciers is not only raising sea levels, wave heights, and storm surges but also increasing rates of warm water ocean evaporation. This in turn, is generating more intense “rain bombs.” After 2017’s Hurricane Harvey scientists were able to attribute between fifteen and thirty-eight percent of the rainfall that caused massive flooding in the Houston Texas area directly to human driven climate change.

This in turn is having measurable effect on the more parochial concerns of humans—ocean productivity and predictability. Put simply we’re rapidly moving from what policymakers used to call ocean and coastal management to what emergency room and battlefield physicians call triage; saving what we can while we can.

In October, 2018 the U.N. Intergovernmental Panel on Climate Change, made up of the world’s leading scientists in the field, warned that global carbon emissions would have to be cut by at least forty-five percent by 2030 if there’s any hope of keeping planetary warming at a dangerous but less than catastrophic level.

But to do that we need to reduce our global dependence on fossil fuels by half in the next eleven years. The last time the U.S. took on a task on that scale was World War II, when we mobilized war production to become the world’s “arsenal of democracy” and launched the Manhattan Project that created the first atomic bombs.

Unfortunately, those who today are not denying climate science on behalf of the coal, oil, and gas industries (the Republican Party) are treating it like the 1983 U.S. invasion of the tiny island of Grenada (most of the Democratic Party) rather than the existential threat to human civilization and planetary biodiversity that it is. One promising exception is progressive democrats recent introduction of the Green New Deal congressional resolution as an aspirational model for how we can quickly scale up our policy responses to the level needed.

So now our job is to do what we can using our moral and political authority, litigation and imagination, perhaps motivated by the words of the anti-Fascist Italian philosopher Antonio Gramsci. He suggested we approach life with “pessimism of the spirit; optimism of the will.”

What does that mean in practice? The rapid pace at which the U.N. seems to be moving toward a high seas treaty that would protect the two-thirds of the ocean beyond any nation’s jurisdiction from commercial fishing and other extractive industries improves my will and spirit. It’s also the result of a global activist effort based on what science has already shown: large protected areas of nature are more resilient to climate impacts than those compromised by extraction and pollution.

And perhaps being a Californian makes it hard not to maintain a core of optimism. In my book, The Golden Shore – California’s Love Affair with the Sea, I describe how, with forty million people and the world’s fifth largest economy, our state has made the link between good stewardship of our coast and ocean and a healthy economy. And our new governor Gavin Newsom appears to be more of a climate and environmental activist than the former governor Jerry Brown. 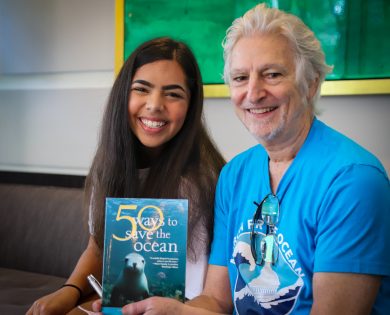 And the young activists I work with don’t allow me much time for gloomy pessimism. Groups like Heirs to our Oceans and Sea Youth Rise Up, and individuals like Hannah Testa, the sixteen-year-old anti-plastics activist who participated in our first global March for the Ocean last June and helped get the state of Georgia to establish a Plastic Pollution Awareness Day, are not just future leaders. They are our partners today, if we’re willing to work with them, mentor when asked, and maintain a sense of realistic possibilities for the future they’re looking towards.

Pessimism of the spirit and optimism of the will are about saving enough to rebuild, even if we may not see the results in our own lifetimes.

If you’d like to pass this article on – you can find a new version just out in the Progressive Magazine here.

Yet another source for optimism is the Green New Deal resolution introduced by Massachusetts Senator (and former Peter Benchley Ocean Award winner) Ed Markey and the newest and most high profile member of the House, Representative Alexandria Ocasio-Cortez of New York.

At 14-pages in length it calls for programs to address climate change and economic inequality through a jobs-intensive rebuilding of the nation’s energy system and infrastructure to one based on renewable energy, a green economy and greater equity. It’s also based on President Franklin D. Roosevelt’s New Deal of the 1930s, the social and economic reforms and public works projects ranging from social security to the Hoover Dam that helped remedy the worst impacts of the Great Depression. 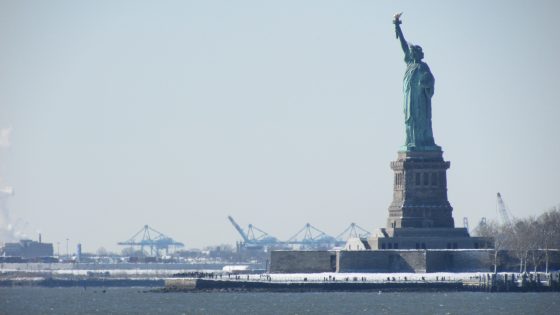 However the Green New Deal remains more aspirational than specific when it comes to a suite of legislation that might be proposed on 1/21/21 – February 21, 2021 the day after the next inauguration, assuming we have elected a new president and congress who actually want to address the threat of climate change.

This is why Blue Frontier has reached out to the Center for the Blue Economy and together, with support from the American Resilience Project, has fashioned a white paper for a “Blue New Deal.”  The idea is to initiate needed discussion on key policies and public investments needed if we’re going to strengthen the coastal and ocean aspects of  a Green New Deal to make it reflect the needs of people living or dependent on our coasts and public seas (which is all people), plus the resilience of the marine ecosystems that are and will be absorbing the impacts of climate disruption.

Areas of concern include federal flood insurance and disaster response, living infrastructure and shorelines, fishing communities and working waterfronts, ports and shipping and much more.

We hope to be able to share this report with you by our next Blue Notes. 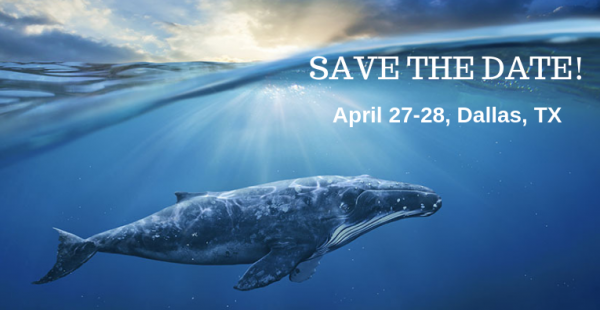 From the Mountains to the Sea – With Flippers and Spurs

At a time of unprecedented environmental threats to our blue world we’re inviting people to join Blue Frontier, the Inland Ocean Coalition and EarthX at the Inland Ocean Action Summit (IOAS).  This Summit will help expand and strengthen the coalition of citizen activists needed across the heartland to make the health of our ocean an issue of national and global significance to policymakers and our fellow citizens from sea to shining sea.

What will you get by being a part of this historic summit?

Saturday:  Speakers, panels and workshops to learn, share and network about the issues and opportunities for building and diversifying the Inland Ocean movement

Sunday:  A morning media-training workshop given by four top professionals including Texas’s leading environmental journalist – to help you become a better communicator of your issues.

Afternoon – A national chapter meeting of the Inland Ocean Coalition to coordinate and support each other’s efforts to grow the wave of change you are a part of. 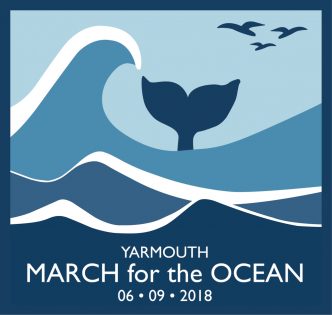 Here’s a March for the Ocean poster from Maine we’d never seen before from the estimated 120 M4O activities that took place last summer. Just heard back from the M4O organizer in India that there will be a new march organizer there for the coming June 8th (World Ocean Day) march. New marches are organizing in Europe along with repeat marches from California to Latin America and Asia. We’re hoping many more people will get involved this year to put an end to offshore (and onshore) oil drilling, plastic pollution and more. For more go to www.MarchfortheOcean.org 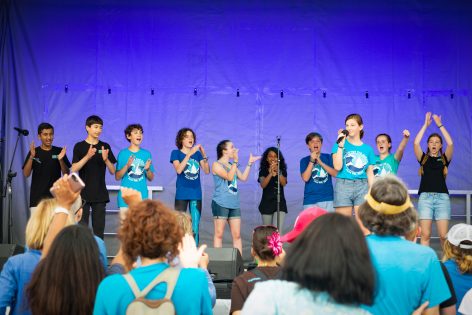 Stand with Blue Frontier and Speak for our Ocean

Your contribution can make a significant difference. The ocean is rising and so are we!

Thanks and Best Fishes from the Blue Frontier team,