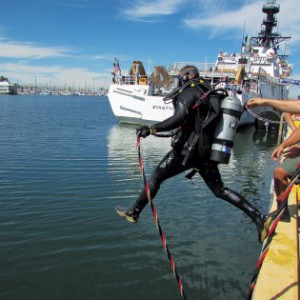 “My umbilical is stuck,” MK1 Michael Pearsall reports. “Primary banks going down,” DV1 Geri Cabrera says from where she’s monitoring her fellow diver’s air, communications and depth on the XLDS (Extreme Lightweight Diving System). We’re on a Coast Guard pier in Alameda, Calif. It’s a hot, clear day, and we can see his bubbles about […]