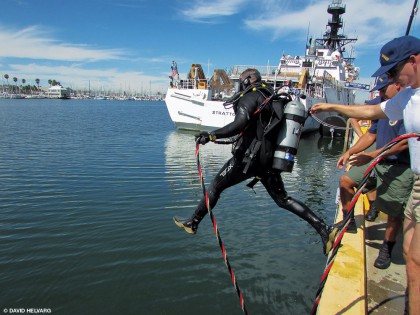 We’re on a Coast Guard pier in Alameda, Calif. It’s a hot, clear day, and we can see his bubbles about 30 yards out.

“I’m having a hard time breathing. I need some air,” Pearsall says.

“Tell the diver to go to EGS,” directs team supervisor DV1 Adonis Kazouris, referring to the emergency gas system. Cabrera relays the message. Pearsall switches to the EGS scuba tank on his back instead of the rack of tanks on the pier that has been supplying him air through a quarter-inch umbilical.

“Can you get the umbilical untangled?” Kazouris asks Pearsall.

“No, negative,” he replies.

The team’s second diver proceeds over a muddy gray bottom through murky, 5-foot-visibility water and reports, “I’ve found a leak in the umbilical. Unfouling it now.”

“Thanks, buddy,” Pearsall responds into the mic of his MK-20 full-face mask, prompting some wry grins from his seven topside teammates.

Soon line handlers lift the two divers to the surface. “Divers on surface,” Kazouris calls out.

“Divers on surface,” a topside chorus repeats. The two divers climb up a swaying 15-foot rope-and-wood Jacob’s ladder that’s been secured to the pier a short distance behind the Coast Guard cutter Stratton.

I’m with a “fly-away team” from the U.S. Coast Guard’s Regional Dive Locker West (RDLW), based in San Diego, and working out of a trailer full of tanks, weights, a compressor, safety lines and more.

« « Older Entry | Next Entry » »
« Previous Post: “The Finest Hours” Celebrates a Heroic, Near Impossible Coast Guard Rescue — One of Many in Coast Guard HistoryNext Post: The Shifting Politics of Offshore Drilling »