Top
You are here: Home / The Blue Beat / 50 years after Santa Barbara oil spill, the call remains: ‘Get oil out’

This story was originally published by David Helvarg in the LA Times on Jan. 25, 2019. It can be viewed here. 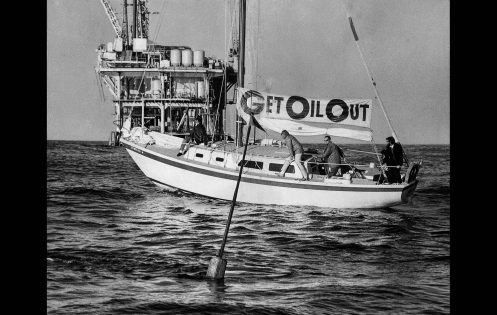 Jan. 28, 1970: Boat with officials from GOO (Get Oil Out) leave after dropping a permanent buoy in Santa Barbara Channel where oil leaked the year before. This photo was published in the Jan. 29, 1970 Los Angeles Times.

Fifty years after a California oil spill launched the modern environmental movement, we may finally be moving beyond the age of oil, and none too soon.

In October, the U.N. Intergovernmental Panel on Climate Change, made up of the world’s leading climate scientists, warned that global carbon emissions would have to be cut by 45 percent by 2030 if there’s any hope of keeping planetary warming at a dangerous but less than catastrophic level.

Luckily, job-generating renewable energy now has become competitive with or cheaper than most forms of fossil fuel. Progressive Democrats are also calling for a Green New Deal that aims to transition the U.S. to a clean-energy economy, addressing both climate change and inequality. This idea is not that different from what candidate Barack Obama proposed — but failed to follow through on — to get us out of the 2008 recession.

For those who think a rapid energy conversion is not feasible, consider how in 1850 whale oil was the lubricant of the machine age and the light source for many of America’s finest homes, public buildings and streetlights. Thirty years later, rock oil (petroleum) had completely displaced it as a source of both energy and economic expansion.

Soon the demand for petroleum had taken to sea, with the world’s first offshore oil-drilling piers built in Summerland (Santa Barbara County) in 1896. It would take more than half a century to persuade Californians living just north of Summerland in the city of Santa Barbara that offshore drilling had become a safe technology.

On Jan. 28, 1969, just a year after the federal government leased offshore drilling tracts in the Santa Barbara Channel, and after it issued waivers allowing Union Oil (now part of Chevron) to reduce the length of its standard pipe casing from 500 to 15 feet, a crew drilling their fourth well hit a snag. Oil and gas exploded up the pipe string. When the blowout was capped, the oil began leaking below the shortened casing. Within days some 3 million gallons came ashore, covering 35 miles of sandy beaches with a viscous black coating of crude 6 inches thick. The oil slick gave the ocean waves a sludgy pulse and filled the air with an odor akin to gasoline.

When President Richard Nixon made an appearance after the spill in March, he was met by thousands of silent, angry residents, some carrying signs reading “Get oil out!”

After bipartisan actions in the 1970s to clean our air, water and protect wildlife and human health, environmental stewardship evolved from a social movement to a societal ethic, although one that, like “love thy neighbor,” was often ignored in practice.

Still, as recently as the 1990s, calls for environmental rollbacks, science denial, vandalism and violence against green activists (predominantly outspoken rural women) were largely limited to Western states. This is where the cattle, timber and mining industries were fighting to maintain cheap federal subsidies for their operations on public lands.

At the national level, environmental protection remained popular with voters of all parties. In fact, it was Republican presidential candidate George H.W. Bush’s pledge to be the “environmental president” that spurred the founding of the anti-environmental-law movement referred to as Wise Use in 1988.

It was only during the presidential administration of Bush’s son, George W. Bush, in the early 2000s, along with the Supreme Court’s Citizens United ruling that gave the oil-rich Koch brothers — and the oil-and-gas industry itself — huge influence on the Republican Party, that the virulent anti-environmental rhetoric of the Wise Use movement was adopted by the GOP. This included crude climate science denial. When President Trump calls it a “Chinese hoax” or claims that, “People like myself — we have very high levels of intelligence” — don’t believe in climate change, he’s speaking for the Republican Party.

But being pro-oil and anti-environment is not necessarily good electoral politics, even in red states such as South Carolina. After Rep. Mark Sanford, a conservative Republican who opposed drilling off his coastal district, was defeated by a Trump supporter in his primary election, five Republican mayors endorsed the Democrat in the race. Joe Cunningham, an ocean engineer and outspoken opponent of offshore drilling, went on to win in the November 2018 midterms.

The Trump administration’s ongoing push to open up more U.S. waters to drilling and acoustic oil surveys that can kill fish and whales has sparked opposition all along the eastern seaboard as well as in California, Oregon and Washington.

Only now we know drilling for hydrocarbons is also a product-liability issue. Used as directed, fossil fuels spill carbon dioxide into our atmosphere, heat our air, alter our weather, dry our forests and soils and acidify our seas.

The first steps in transitioning to more abundant renewable energy should include the early elimination of the dirtiest and most dangerous forms of fossil fuel in terms of worker safety, pollution and carbon emissions. That would be coal, tar sands and offshore oil. In terms of protecting jobs for those energy workers, the easiest part for the Green New Deal would be to retrain roughnecks and roustabouts from offshore rigs for similar jobs such as offshore wind turbine technicians and line handlers.

Growing numbers of citizens are mobilizing around these creatively disruptive ideas, updating the Santa Barbara spirit of 50 years ago with demands that our elected officials get in line with market trends and entrepreneurial opportunities to Get Oil Out!

David Helvarg is the Executive Director of the conservation and policy organization Blue Frontier. His latest book is “The Golden Shore — California’s Love Affair with the Sea.”

This story was originally published by David Helvarg in the LA Times on January 25, 2019. It can be viewed here.

« « Older Entry | Next Entry » »
« Previous Post: Time is running out to stop Trump from opening California marine sanctuaries to oil drillingNext Post: Triage for Our Ocean »