Top
You are here: Home / The Blue Beat / Is Florida’s climate change model — denial at the Capitol, frantic action at the beach — in store for the U.S. under Trump? 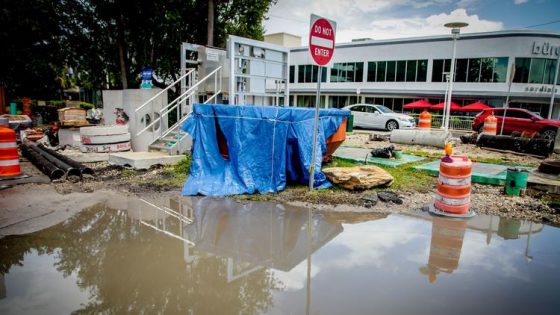 When Floridians narrowly voted for Donald Trump on Nov. 8, they might as well have elected to drown themselves. Rising seas and accelerating storms are inundating this low-lying state, but a majority of its citizens still chose a presidential candidate who calls climate change a hoax.

A disconnect between its political choices and climate reality is all too familiar in the Sunshine State. Florida’s newly re-elected U.S. senator, Marco Rubio, and its two-term governor, Rick Scott, are both climate-change dodgers. They shrug off the science that indicates 1 in 8 houses in their state will be lost to rising seas by the end of the century. They endorsed Trump, and they’re famed for responding to global warming questions with “I am not a scientist.”

Meanwhile, an octopus swam into a Miami Beach parking garage in November during one of the city’s periodic “sunny day floods.” Massive sewer spills are poisoning Tampa Bay as local storms worsen. And beaches and shoreline are rapidly disappearing along the southeast Atlantic coast, where sea level rise is accelerating from 8 inches over the last century to a conservatively projected 3 feet by the end of this one. The entire state of Florida averages just 6 feet above sea level.

Most of the nation is … like Florida: State governments and voters resist the cure because they refuse to believe they have the disease, or that it exists.

But most of the nation is more like Florida: State governments and voters resist the cure because they refuse to believe they have the disease, or that it exists. But that doesn’t stop dire symptoms from occurring, and so, across Florida, individual communities are already dealing with climate change outcomes because they have no choice.

St. Petersburg, on Tampa Bay, is one such community. Since 2015, St. Petersburg has had three major sewage spills. In September, more than 120 million gallons of partially treated human waste poured into the bay, leaving residents and visitors complaining of the stink and fearful to enter the water.

St. Petersburg Mayor Rick Kriseman diagnosed it correctly: Changing climate, in the form of heavier rains and storms, has been overwhelming the city’s aging wastewater treatment system. St. Petersburg has now committed more than $60 million for short-term upgrades and $300 million to fix the water management system as a whole. In November the City Council also earmarked $800,000 for climate planning, including a switch to 100% renewable energy.

Still, City Council Vice Chairwoman Darden Rice told me that when she tried to explain the link between sewage spills, seawater intrusion, increased rains and climate change, one of her constituents told her to “stop talking about climate change and just fix the damn sewer plant.”

In Miami Beach, the famous barrier-island resort city a causeway away from Miami proper, locals are also paying a steep price for climate change. During sunny day floods, seawater in Miami Beach fills some streets ankle- or knee-deep. Now the city is on the hook for more than $400 million in expenditures to raise streets and to install sophisticated water pumps, including infrastructure that can support ever-larger pumps as sea level rises.

The mayor, Philip Levine, is confident these measures will work. “I’m quite optimistic that there’ll be a Miami Beach 50 years, 100 years from now,” he told National Public Radio. “But we need to set aside … the debate about whether climate change is happening and embrace our problem.”

Four southern Florida counties are doing just that. Tired of obfuscation and too little direct action out of the state Capitol in Tallahassee, Broward, Miami-Dade (where Miami Beach is located), Monroe and Palm Beach counties have formed the Southeast Florida Regional Climate Change Compact. They’ve appointed “sustainability officers” to work on mitigation and resiliency policies before Fort Lauderdale, Miami, the Everglades and the Florida Keys are inundated.

Tallahassee itself can’t entirely avoid dealing with global warming, even if the governor and the Republican majority won’t call it what it is. To respond to beach erosion, state officials are permitting the construction of thousands of new sea walls, and in partnership with the U.S. Army Corps of Engineers, the state continues to hire contractors to dredge and dump sand in Miami and elsewhere. Unfortunately both strategies have high price tags and questionable outcomes in terms of actually protecting the coast.

Florida is a canary-in-the-coal-mine model for what global warming has in store for us. It is facing not just the effects of rising seas and worsening storms but increased wildfires, drought, insect-borne diseases, coral bleaching and heat waves.

Environmentalists used to say, “Think globally, act locally.” If the fact that CO2 emissions are increasing temperatures isn’t acknowledged, Florida will also become a model for how we cope with our new reality: denying climate change globally, but acting — frantically, expensively and with too little impact — locally.

David Helvarg is executive director of Blue Frontier, an ocean conservation and policy group. His latest book is “The Golden Shore — California’s Love Affair with the Sea,” just released in paperback.