Top
You are here: Home / articles / Louisiana Is Starting to Rise Up Against Big Oil

The Obama administration held its biggest oil lease sale yet—and then the protesters showed up. 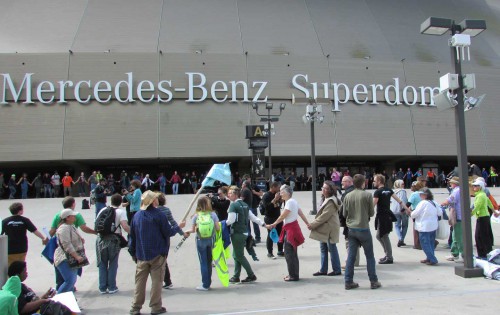 Demonstrators gather outside the Mercedes-Benz Superdome in Louisiana to protest Big Oil. (Photo by David Helvag)

I’ve seen Louisiana and the Gulf devastated and drowned after Katrina, and I’ve seen it in a froth of anger and confusion following the BP blowout and months-long Deepwater oil spill. When I asked one shrimper if the fishing boats that were deployed in BP’s cleanup were doing any good, he replied, “They’re just paying us not to riot.”

Last week, about one hundred people from Texas, Alabama, and around the nation joined 200 residents of New Orleans and nearby parishes to protest the lease sale of 43 million acres in the central Gulf of Mexico. The largest oil sale of the Obama presidency was taking place in the Superdome, once the shelter of last resort for thousands of Hurricane Katrina refugees.

“We’re not a sacrifice zone, we are living, breathing people, and enough is enough,” said Hilton Kelley, the tall, charismatic founder of the Community in Power and Development Association of Port Arthur, Texas. Port Arthur is a petrochemical and refinery-heavy area also known as Cancer Alley.

“Now we’re letting them know we won’t stand by silently and let them destroy our way of life anymore,” Kelley said as protesters gathered in a small park near New Orleans’s City Hall. After a short, spirited march to the rebranded Mercedes-Benz Superdome the demonstrators made their way through security, up several escalators and into a large meeting room where the lease sale’s top bids were to be read off by the regional director of the Bureau of Ocean Energy Management.

At first, some of the 20 or 30 oil men (and a handful of women) scattered among several hundred plush blue folding chairs seem indifferent to the loud crowd marched to the front of the brown-and-grey-carpeted conference room, chanting, “They can’t wash us away” and “Stop the leases, stop the greed, give the people what they need!”

While a dozen security guards gathered by a far entry to the room, the government officials from BOEM acted as if nothing out of the ordinary was happening. “Most of these people came here in petroleum-driven cars or jets. They know what they’re opposed to but have no solutions,” a man in a blue suit scoffed, before giving me the usual industry talking points about global demand for fossil fuel. I nodded and asked his name. “John Doe,” he half-grinned, before going back to his seat to review his printed list of bids on “Sale 24.”

Often lost behind banners reading “No Drill, No Spill,” and the feathered headdress of Lakota Chief Arvol Looking Horse, who traveled down from South Dakota where Native Americans are battling fossil-fuel interests, BOEM’s Mike Celata gamely read off the top bids for various leases. It was hard to hear him.

“You can’t wash us away!” the protesters chanted.

Next to a couple of excited little girls jumping up and down among the activists I noticed retired Army National Guard Gen. Russel Honoré in a rakish bill cap, one of the few heroes of Hurricane Katrina and now a leader of his own “Green Army” for environmental justice. Honoré is a beloved local figure, though I once heard a group of BP executives mirthfully disparaging him at a journalism conference here in New Orleans, until they spotted me and shut up.

“The Lease Sale for the Central Gulf is concluded today,” Celata announced, though few could hear him. “Thank you for your attendance.” The room began to clear and the chanting subsided. No arrests were made, although several dozen activists had volunteered and trained for that possibility.

Louisiana is one of America’s first—and likely to be its last—oil colony, which perhaps makes a citizen uprising like this seem unlikely. Until the recent decline in global oil prices, the oil industry accounted for about 15 percent of the state’s employment, 20 percent of its income, and around 100 percent of the lobbyist influence in Baton Rouge.

But despite all its oil wealth, Louisiana remains the second-poorest state in the nation, and far from everyone has benefited. The Louisiana Native American town of Isle De Jean Charles recently received a $48 million federal HUD grant to relocate its last 100 people (down from 400) to higher ground, because sea-level rise reduced their island home from 23 square miles to a quarter-mile wide and half a mile long. This is one of the first instances of climate-driven relocation on the US mainland.

As these affected populations rise up, the beneficence of the oil industry is also shrinking. Low oil prices meant the $156 million dollars raised by the federal government at this sale was the fourth-lowest amount since 1983. The sale also had the fewest bidders and most protesters of any Gulf lease sale in history.

The irony is that for years, energy-policy experts argued that clean carbon-free energy like solar, wind, and hydroelectric were not likely to become competitive on a global scale until oil became prohibitively expensive. As it turns out, very cheap oil is actually undermining industry’s ability to fully exploit the dirtiest fossil fuels, including coal, tar sands, and Arctic and other offshore petroleum.

Activists on the ground in Louisiana want to keep taking advantage of this trend. “We really need to be pivoting toward renewables,” Anne Rolfes of the Louisiana Bucket Brigade told me as the protest wound down outside. “We also need to make the jobs argument better than we have.”

The No New Leases coalition of environmental and civil-rights groups that organized the protest is calling for 1,000 new jobs to repair the offshore oil industry’s rusting infrastructure.

“What we’ve done today is just a starting point,” said a grinning Rolfes outside the Superdome. “We’re going to win this thing.”

I’m somewhat skeptical, given that the best available science continues to generate some of the worst imaginable scenarios about the future of our coastal cities, glaciers, forests, reefs, agriculture, and warming, acidifying seas.

But then I boarded the ferry back to the West bank. Crossing the Mississippi River, I looked up and spotted the state emblem, a brown pelican. Once close to extinction in the Gulf, they are now making a strong comeback, despite the BP disaster. Between good people and funny-looking seabirds, it’s hard not to be a little hopeful.

Read the article in ‘The Nation’ Here.